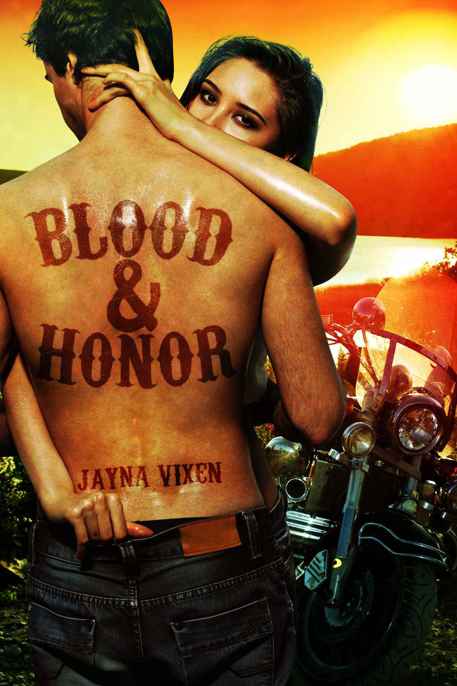 All rights reserved. No part of this book may be used or reproduced in any manner whatsoever including Internet usage, without written permission of the author.

Other Works by Jayna Vixen

Michaela Blake huddled in the corner of a low-budget motel room. For the umpteenth time, she thought of Rhee. Her sister was probably still looking for her. Maybe it wouldn’t be so bad to confess her sins.

And the sins of my stepfather.

But what kind of life would she have, then? She’d go to jail. Probably forever.

She was so tired of running. Sometimes, she wasn’t sure what she was running from any longer. Mickey never thought she would live to see the day that she pined for the life she had back home. But, she couldn’t go back there. Not ever. Not after what she’d done. Mickey sighed, staring at the small pile of bills on the table. She couldn’t run forever, but she couldn’t stay here, either. Her sins were always one small step behind her. They’d find her, soon enough.

Sure, everybody made mistakes. But this—this was no simple mistake that could be explained away. How could you rationalize murder?

Mickey’s hand trembled as she turned the squeaky knob in the shower, seeking to distract herself, before her mind took her down a path she wouldn’t be able to turn back from. Nearly four years of trying to escape and she was no further from her past than if she had been running in place the whole time. The dim light in the bathroom came from one broken fixture that swung back and forth with an audible creak. The yellow bulb cast an eerie, harsh glow that made her squint. She regarded herself in the cracked mirror, the chipped, peeling paint framing her gaunt features.

Large, purplish circles sat beneath her hazel eyes. Thanks to the hasty self-trim a week ago, her hair, which had once been her glory, stuck out at all angles. Mickey ran her hand through the sloppy dye job and the unwanted memory struck her like a two-by-four to the brain.

“You and Rhiannon should never cut your hair,” her mother crooned, almost reverently.
The brush passed through Mickey’s hair, almost mesmerizing her with its long, methodical strokes.
She stared at her mother’s reflection in the mirror through half-lidded eyes.
“Such lovely hair you and your sister have, Mouse.”

Mickey pressed her fists against her temples as an onslaught of negative emotion sent waves of agony through her head. Her gut roiled, bringing the acrid sting of bile into her throat.

My fault.
All my fault.

“I’m so sorry,” Mickey whispered to the haggard reflection in the mirror, the pounding in her head combining with the itch on her skin. Dirty. She was so dirty.

Nothing seemed to wash away the blood on her hands or the anguish that festered in her soul, but she had her rituals nonetheless. After what seemed like an eternity, the old shower pipes brewed up hot, piping steam. Mickey stepped into the scalding spray without hesitation, relishing the burn as it reddened her skin. Sometimes, she wondered if she would ever feel clean again.

The inside of me is black.
Ugly.
Why won’t anything make me feel clean?

It wasn’t for lack of trying. Mickey scrubbed herself down violently with the small pat of motel soap until it was just a sliver in her palm. She remained in the shower until the water began to cool. The small, scratchy towel did nothing more than move the water around on her body. She stood for a moment, her head bowed, letting the moisture drip onto the floor.

She fought it, but she knew she wouldn’t win the battle this time. It had been almost two days with nothing more than a catnap on the bus. Mickey hated falling asleep—hated letting her guard down. But every few days, she crashed, whether she liked it or not. Compulsively, she checked the locks and secured the windows; she knew from experience—she could never be too careful.

Fear impelled her exhausted limbs to move. She stacked the small chair and table in front of the door, followed by the old television and even the ironing board. Her movements were practiced…automatic. Finally, Mickey wrapped herself in a ratty, oversized tee shirt—one of the few remnants of her former life.

Finally, she fell on the cheap mattress with an audible groan, her backpack under her head. It was uncomfortable, but she couldn’t rest at all without knowing that her bag and its meager contents were safe. Sometimes, Mickey thought it would be easier to just toss the damn thing off a pier, but she knew that she had to hold on to what was inside her bag.

Someday, she’d know who to trust with her shame.

Sleeping.
Ugh.
It was something a person had to do but she wished she didn’t have to dream. Her eyes closed even though she fought the loss of control and the unknown. Desperately, she summoned the strains of an old child’s prayer into her mind. Anything to avoid the fear.

Unfortunately, the mantra she relied on to keep her safe, to keep the bad men out of her head, wasn’t always effective.

“You got a boyfriend, Mouse?”

Mickey wasn’t interested in boys, and she was pretty sure the feeling was mutual.
Sure, some of the girls in her grade had boyfriends but all that meant was that they held hands at lunch.
Mickey and her sister looked nothing like those girls, with their ivory skin and blond hair.
No, they shared the same heart-shaped faces, green eyes, and long, reddish-brown tresses.

Rhiannon—now, she was beautiful.
Her older sister turned heads and she didn’t even know it.
But, Rhee had been acting funny—distant
—
lately, and Mickey wasn’t sure what was going on with her.
All she knew was that she was miserable and lonely, and she missed the ways things used to be.
Before Paul came along.

Now, she had to sit here and listen to her stepfather, and he was starting to make her uncomfortable.
Something about the way he looked at her just made her feel…dirty.

“How ‘bout your sister?
She has a boyfriend, right?”

Mickey didn’t want to talk about Rhee.
Or boyfriends.
She wanted to listen to music and dream about when her daddy was alive.
I hate cancer, she thought to herself, trying to ignore Paul.
Ugh, why wouldn’t he leave?
She shrugged, hoping that Paul would take the hint and just go away.

But this time…he didn’t.

“Your sister’s been running around town in those tight jeans, acting like a tramp, hasn’t she?
Is she spreading her legs for some boy at school?”

Mickey glared at her stepfather.
He was becoming totally gross.
Even though Rhee wasn’t around much, Paul had no right to say such disgusting things about her.

‘That’s not true!”
she retorted.

He took a sinister step closer to Mickey as she reclined on her bed with her mp3 player clutched in her hand.
Her senses went on high alert.
Fear, cold and prickly, settled in the pit of her belly.

Even though things weren’t like they used to be
—
not by a long shot
—
the afternoon had started off so normal.
School passed in a series of boring lectures followed by a few hours in her room, listening to music and daydreaming before she turned to her sketchbook and her camera.
Her pictures—they were the one part of her life that was stable.

Why wasn’t Paul at work?
She wasn’t even sure what the man did all day.
Sometimes he came home with a lot of cash that he liked to wave around, but he usually spent it all on booze and who knew what.
Today, he was home and she could tell that her stepfather wasn’t in a very good mood.

Mickey clutched the small, square keeper of her tunes as though it was a weapon, even though she wasn’t quite sure why she felt such a sudden and intrinsic fear of her stepfather.
Mickey shuddered as he planted his dirty hand on her pink and white comforter, the stink of whiskey and cigarettes pervading her senses.
His hand looked so out of place on her pretty bed.

“Who’s been sniffing around you, Mouse?
I’m sure there’s some hopeful little prick, what with those tits popping out on you.”

She was shocked at the words that had come from his mouth.
The prickle of apprehension turned into full-blown fear as Paul leered at her chest.
Hot shame painted itself on her cheeks as Mickey crossed her arms over the small bumps that had recently started to bloom there.
She hated it when Paul called her by the nickname her real dad had given her.

“Maybe you’ve been tramping it up, too, huh?
Making me look bad?
Like I’m not a good daddy?”
he accused.

“No!”
Mickey scrambled back, away from his hands.
She glanced at the door, noting that he had closed it when he entered the room.
The urge to flee was becoming overwhelming.

Now that he was close enough to smell, it was clear that Paul was drunk
—
and when he was drunk, he was dangerous.
Mickey knew that much from the grunts and muffled screams she could hear from the bedroom the man shared with her mother—and from the shameful look on her mother’s face the next morning.