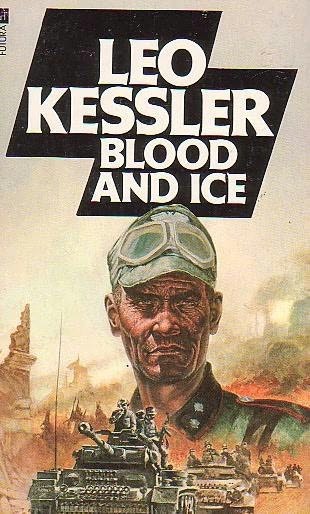 Assault Regiment Wotan, the elite band of men whom Kuno von Dodenburg had led so often to victory, had been mercilessly cut down in the forests of the Ardennes. Only Sergeant-Major Schulze remained to lead the battered, war weary survivors of Hitler's famed SS through the secret pass over the snow-locked Vertes Mountains, in the Fuhrer's desperate plan to save Budapest from the Soviet armies. Every single one of them knew that it was the plan of a madman, and every man knew that whatever the cost it had to succeed.

Also by the Same Author

‘And he is dead who will not fight,

and who dies fighting has increase.’

‘Rather dead than Red.’

students of the avant-garde. When you hear

the barked command “Hands behind your backs”

and begin the march towards the archipelago,

only then will you begin to understand.’

SECTION ONE:
SS REGIMENT EUROPA
ONE

Sergeant-Major Schulze, in charge of the little convoy of SS men, the survivors of SS Regiment Wotan, did not open his eyes.

The Corporal licked his lips anxiously and looked again at the dark shapes on horseback moving across the snow-capped height, parallel with the Hungarian road. ‘Schulze,’ he shook the big NCO’s shoulder, ‘there’s somebody up there, watching us! Looks like the Ivans to me.’

‘Christ!’ Schulze groaned. ‘Can’t even sleep in this bloody army!’ He sat up and stared at the black flecks about half a kilometre away. They had to be Russians. The 4th SS Panzer Corps which was defending this part of the Hungarian front was desperately short of men: that is why they, the pathetic handful of survivors from the ill-fated Ardennes Offensive, were being rushed to the East.

Schulze glanced at the two halftracks rattling along behind him at regulation convoy distance, their decks covered with camouflage nets against air attack. Below them the exhausted SS men, who had been travelling three days now, would be asleep like the men snoring all around him. ‘What do you think?’ the Corporal, who was the airlookout, asked anxiously.

‘Shut up!’ Schulze said brutally. ‘I’m thinking where the Ivans are going to hit us.’ Schulze made up his mind. He stood up and whistled shrilly. The driver of the second halftrack heard the whistle. His head spun in Schulze’s direction.

Carefully, Schulze placed his hand on the top of his helmet, fingers outstretched. It was the infantry signal for ‘rally on me’. The driver understood at once. He accelerated. Behind him the other driver did the same. Schulze crawled over the sleeping men, kicking each one in turn and shouting: ‘Don’t grow corns on yer asses! …Move yourselves!’

Everywhere the exhausted men began to sit up, grumbling and cursing and reaching automatically for their weapons. They were veterans. They knew Schulze would only wake them if there were trouble.

Schulze balanced himself precariously on the swaying back of the halftrack. The second vehicle was about a metre and a half behind but he dare not stop the convoy to transmit his orders, just in case there were other Russians waiting for them in the firs on either side of the little road. He took a deep breath and launched himself into the air.

His big feet crashed onto the halftrack’s blunt snout. His hands clutched desperately and next instant he was dragging himself over the metal windshield into the cab. He banged the butt of his Schmeisser machine pistol hard against the metal side of the cab. ‘Shake those little sleepy heads of yours awake,’ he yelled, ‘while you’ve still got some to shake.’

The worn, unshaven men of the second halftrack came to life.

‘Now listen,’ Schulze said. ‘We’ve got visitors up there,’ he jerked a big dirty thumb at the skyline, ‘Popovs! Right, stand by the lot of you and when they hit us – which they will – I want you lot to show off like ten naked niggers. Remember you lot are
Wotan
.’

They grinned back. Nothing ever seemed to shake
SS Hauptscharführer
Schulze!

The village was typically Hungarian – a collection of shabby white-painted cottages with straw roofs, now heavy with snow surrounded by little tumbledown picket fences. But there was something strange about this one. No smoke was coming from the cottages, yet a herd of sheep, shivering and trembling in the cold, stood grouped by the roadside. Schulze glanced at the skyline. The cavalry had disappeared.

He acted at once. ‘All right,’ he bellowed above the clatter of the halftracks, ‘I think this is where the Ivans have decided to welcome us to the Eastern Front!’

The SS troopers in their camouflaged, green mottled overalls needed no urging. Hurriedly they positioned themselves behind the vehicle’s metal sides, weapons at the ready. Schulze nodded at the driver. He put his foot down on the accelerator and the halftrack shot forward, throwing up clouds of snow on both sides like the wake of a fast ship.

Schulze fired a burst over the driver’s head. The sheep, jostling and bumping into each other crazily, fled down the road into the daisy chain of mines which had been spread across it in anticipation of this moment. The first mine exploded with a thick impressive crump. Angry scarlet flame shot upwards, sending animals hurtling through the air. The halftracks sped along the smoking road, and started to take the first wild bursts of enemy slugs on their armour.

The Russians were everywhere but the ease with which the SS carriers had passed the little mine barrier surprised them. Their fire was wild and erratic. Schulze gave them no chance to recover. With his men firing from behind the cover of their vehicles, the enemy bullets whining off them harmlessly, he led them through the ambush at a hellish speed. A satchel charge hurtled through the air. The driver swerved just in time. It exploded in the middle of the road, sending the ten ton carrier swaying back and forth like a ship at sea. Schulze poured an angry burst of nine mm slugs into the cottage from which the grenades had been thrown. A man fell out of the window, his face gone, hands fanning the air crazily.

They were nearly out now. Schulze glanced behind him. The other two halftracks had made it too, both their windscreens cracked into glass spiderwebs. He breathed a sigh of relief. ‘We’re nearly out of this shit –’ he began.

He never finished his sentence. It was then that the Russian cavalry hit them, streaming out of a side track between the last of the cottages, knouts lashing the sweat-lathered bodies of their horses, curved swords whirling in silver flashes, strange cries torn from their gaping mouths.

‘
Kusacken
’
1
someone yelled in fear.

Schulze knew why. The Cossacks took prisoners, but only for long enough to plunder them of their possessions and practice primitive barbarities on them before finishing them off. ‘All right, keep cool. They’ve not got as far as sawing off yer balls with those penknives yet.’

Swiftly he switched the machine pistol to single shots and fired at the first rider with the silver insignia of a Cossack captain. The man flew over the streaming mane of his black horse, the silver curve of his sword sailing high into the air.

The rest of the troopers in the halftrack followed his example and the morning air was full of yells, curses, screams, cries of agony. But still they came on. The first of the Cossacks drew parallel with the halftracks. Schulze flicked to automatic and fired a wild burst. The leading Cossack’s horse was hit. Red flowers of blood erupted suddenly the whole length of it flank. The stallion reared high into the air, its hooves flailing wildly in an ecstasy of agony.

Just as the stallion went down, the rider launched himself into the air. His dirty paws sought and found a grip on the halftrack and with a grunt he hauled himself over the side and on to the deck. His knife flashed in the weak yellow winter sun, and then plunged deep into the driver’s back. Schulze reacted in a flash and crashed the butt of his Schmeisser, cruelly into the back of the Cossack’s skull, crushing it like a soft-boiled egg. A moment later the halftrack slammed hard against a great oak to the left of the road and came to an abrupt halt.

Behind them, the two other halftracks were forced to brake, skidding wildly on the slick snow surface, as their drivers tried desperately to avoid crashing into the lead vehicle, sprawled crazily halfway across the road.

‘
Urrah!
’ a great cry burst from the Cossacks’ throats as they urged their horses forward their manes streaming wildly behind them.

The leaders did not even rein in as they came level, but dropped straight from the saddles on to the halftracks. Instantly the decks of the German vehicles were transformed into a wild, cursing, swaying mass of men, fighting for naked survival.

A huge bearded Cossack, his broad dark face pitted with pockmarks, grabbed for Schulze’s testicles in the middle of the
mêlée
. Schulze did not give him a chance. He crashed his elbow into the man’s mouth. The Cossack went back, spitting out broken yellow teeth. Tumbling backwards, Schulze smashed the steel-plated heel of his jackboot into the Cossack’s face, crying, ‘Try my dice-beaker on for size, Popov!’

Arms suddenly grabbed him around his neck. He squirmed his head round. A handsome young boy was glaring down at him, his dark eyes gleaming with hate and determination. Schulze thrust his two fingers upwards. They lodged inside the boy’s nostrils. Schulze crooked them and tugged hard in one swift movement. The Cossack screamed hysterically in sheer, absolute agony. Hot blood streamed down Schulze’s wrist as the boy’s nose burst and he fainted across Schulze’s body.

The morning air was suddenly heavy with the rattle of tank tracks and the tremendous crack of an 88mm cannon. The shell passed over their heads and crashed in the village beyond. All at once the Cossacks were running for their lives as the first Royal Tiger, all seventy-two tons of it, came to a halt next to the leading halftrack and began sawing the air with its twin machine guns.

‘Holy shit!’ Schulze breathed out hard and wiped the sweat from his dripping brow with a hand that trembled visibly. ‘I thought they’d sabred my balls off that time...’

A Long Spoon by Jonathan L. Howard
I Know Who Did It (A Jack Nightingale Short Story) by Stephen Leather
The Nephilim by Greg Curtis
Finding Mr. Right by Baron, Katy
The Sporting Club by Thomas McGuane
An Unexpected Love by Claire Matthews
Sáfico by Catherine Fisher
Dora Bruder by Patrick Modiano
Rules of the Game by Neil Strauss
The Salt Marsh by Clare Carson
Our partner