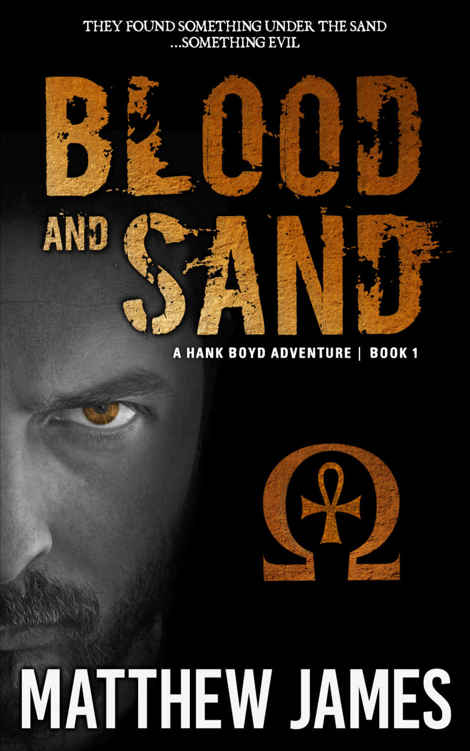 A fierce sandstorm hits southern Algeria and uncovers a lost ruin, its location unknown to modern man...until now. A team led by slacker archaeologist, Harrison "Hank" Boyd, is called in to investigate the find.

In way over his head, Hank must lead his team through countless dangers and survive brutal encounters with enemies both human and inhuman alike. And if that's not bad enough, a shadowy group with a thirst for violence and a blind ambition is hot on their heels and will stop at nothing to obtain what has been found.

Hank and company should have heeded the warning left by the ancient civilization who built this place. Expertly carved into the face of the golden relief found at the ruin entrance and written in perfect Latin is
liberate te ex inferis
...save yourself from hell.

To my wife and daughter.

You made this all possible.

The adventure of writing my first book has been an interesting one indeed. I would be lying if I told you it was an easy process, although it was exciting for sure.

First off, thank you to my editor Jason Keen for putting up with my rookie mistakes and for answering my endless questions. Also, thanks to Jeremy Robinson for your inspiration and for pointing me in the right direction. I would also like to thank Kane Gilmour, Sean Ellis and J. Kent Holloway. You have all been irreplaceable during this endeavor of mine.

You all started as mentors, guiding me along, and have since turned into wonderful friends. From the bottom of my heart, I thank you gentlemen.

The end is near, Rahji-itza!
He heard someone yell, well not yell per say, the statement had been projected into his mind by another. He and his compatriots didn’t technically
speak
any more, they didn’t have to. Thought was quicker and easier to convey.

Out of breath and having trouble focusing on his
own
words, he knew attempting to have a conversation while sprinting at full speed down a dimly lit underground tunnel, was not the place. But he also knew they needed to prepare a coordinated effort once they reached the surface. The battle raging topside was one of mayhem and destruction and they needed to get there as soon as possible to help defend their homeland.

They continued through the stone passage and up a steep grade of earth where they passed beautiful murals, some complete and others just in their infancy. They depicted the long history of their kingdom. The technological advancements that had been made over the centuries had been amazing for sure. Some of the pictographs pictured massive temples and other various structures, while others showed the beautiful landscapes that surrounded the kingdoms walls. The sculptor, a man more than twice their age, was no doubt home hiding, hopeful they would be able to save the empire.

I know, Qaaft,
Rahji-itza thought to the man that was running alongside of him.
However, we must not yet act. We will rise when called upon. We just went over this.

And if he acts before we are summoned?

Rahji-itza glanced over to the third and final member of their party knowing that the speaker, Kylak, was always overly pessimistic, thinking the worst.

And if it does?
Qaaft asked as he skidded to a halt underneath a tall opening above his head, the worry clearly evident in his communication.

He and Kylak stopped next to Qaaft, joining him in his vertical gaze. From this depth they could only see a spec of daylight through the opening. But they knew what awaited them, they had
seen
the events taking place through another’s eyes, that of someone they wish they did not see through.

They saw fire reigning down from the heavens and homes crumbling from intense seismic activity. They also saw flooding rainfall trouncing the kingdom and blood-red lightning destroying temples. A fourth, an exact duplicate in every way to the three, was at the center of the violent storm controlling it, his skin blackened by the hate and revolution he felt towards his own people. His body, which floated in mid-air, was incased in an obsidian ghost-like fire, acting as a buffer against the melee he now wracked upon the city.

Rahji-itza tried to shake the images out of his head, but couldn’t. Without taking his eyes off the now darkening entry point, he sighed a heavy breath and thought,
Then the world will burn.

As they prepared to leave, Rahji-itza’s thoughts turned inward as he relived the conversation he had just had with his brothers.

The three sat in an underground cavern deep within a hidden cave system, discussing the future of their world. Stalagmites and stalactites randomly protruded from the floors and ceilings, occasionally meeting to form huge columns. Above them, through hundreds of feet of solid earth, lay an oasis of unmatched beauty.

They spoke not with their mouths, but with their minds, silently communicating, eyes closed. While they sat around a glowing orb of pure crystal, the room shook. A deep resonating reverberation sounded through the stone ceiling above, signaling that they had to finish their discussion quickly.

Why had they come so deep?
One of them thought. But they had agreed to descend to the depths of their known world, hoping to block their communications from another, someone they didn’t want hearing in on them.

More rumbles followed, their intensity increasing to the point that a nearby column crumbled and fell.

What shall you have us do, Rahji-itza? Are we to sit by and watch the world be destroyed? Why don’t we attack now and defeat our lost kin?

Because, Kylak,
Rahji-itza thought.
We are to help contain him, allowing the people of our homeland to flee.  We, the Elders of this land, will protect it at all costs until the one strong enough to prevail against him is delivered.

The other two reluctantly agreed.

How do we proceed?
Kylak asked.

We will construct a prison powerful enough to contain Nannot,
Rahji-itza answered.

The others sat in silence. No-one had dared to use the enemy’s given name in some time.

Where do you suggest we build such a place?”
Kylak inquired.

Right where we sit, in the center of this very cave,
Rahji-itza replied simply.

The cavity they sat in—while impressive in size—was nothing compared to the one above their heads. Another column collapsed close by as the rumbling increased again.

Under the necropolis? You would willingly taint this place with his presence?
Qaaft, the third and final member of the trio, queried, shock and frustration evident in his telepathic voice.

What power do we use to suppress him once he is imprisoned—once our king is done with him?
Kylak asked.

The answer pained Rahji-itza to admit, but he knew his brothers would accept it knowing there was no other way.

With…us,
he answered, sorrow in his response, as he put a long slender hand to his chest, patting it. He then lowered his head, clenching his eyes tighter.

He continued,
We will use our very beings, our life force. The power from our physical bodies should be adequate enough to contain him until the time is right.”

What of our minds?
Qaaft asked, the thought like a whisper penetrating the quiet.

Our minds will lay dormant until the chosen one needs our strength and guidance,
Rahji-itza replied.
Our consciousness will remain intact, helping to bind his spirit to this place.

After sitting for a moment without conversation listening to the very earth come apart, Rahji-itza, the First Elder, heard the cries for help from the very people he swore to protect and quickly stood,
Come brothers, we must return to the surface and try to restrain our fallen brother and forgive him for what he has done and for what he is yet to do.

The three elders knew the consequences of theirs and their king’s actions. If they bound Nannot to this place, what was once a beautiful place of remembrance, would become a place of eternal nightmares.

Southern Algeria was one of the hottest places on earth. Temperatures could reach in excess of 110 degrees Fahrenheit on a daily basis. Barely anything could survive in the harsh environment. The ground was extremely infertile with very little soil to speak of. The lack of rainfall further prohibited vegetation from budding but, some managed to grow. The only consistency of life inhabiting such an inhospitable region was the occasional desert dwelling creature and the few local tribes.

Karim Dib, a local Tuareg herdsman, ushered his flock through the burning wasteland, struggling to eclipse the endless expanse of sand dunes. Like all the people of his kin he had grown accustomed to the terrain and dry heat, but that didn’t mean he liked it.

“Murjak!” Karim cursed. He wiped his face with a handkerchief and continued on. “Could it be any hotter?” It was a rhetorical question needing no answer.

Yes,
he thought. It could be hotter and had been on countless occasions.

The native endured, leading his herd of camels through a desolate stretch of land on his way to meet a buyer. The money was good, but the job could be a whole lot better.

Though this section of the desert was as unforgiving as the rest, it had one major difference. It was made up mostly of sandstone. Sandstone was a very porous type of rock and within this mineral you can find a fairly large supply of water due to the spongy makeup. Because of these rare subversive water supplies, you could find a somewhat “healthy” population of desert vegetation.

Karim knew he could push his convoy as hard as he needed, they were camels after all, that’s what they did. But he couldn’t, he needed to stop and rest.

Stopping in the next valley between twin rises of sand, he was about to speak a command for his caravan to stop—when a massive gust of wind and sand slammed into him. He fought to stay on his feet, but the pain of the sand scorching his face and stinging his eyes forced him to the ground.

A haboob,
he thought. He had seen many sandstorms in these parts over the years, but this one seemed different. It was…bigger.

The wind picked up speed and started to howl like a freight train, washing itself over everything in its path.

Unable to regain his footing, Karim was buried by the sudden blizzard of sand. He dug and clawed and fought his way to freedom—only to be enveloped again and again.

On his final attempt he was kicked in the face by a struggling camel, it too being forced to the ground between wakes.

With all of his strength exhausted and disoriented from the shot to the head, he was completely consumed forever by the sands, his very existence wiped away. The only things surviving were a few stray camels that had bolted in fear, unknowingly saving themselves.

Less than one-hundred yards from where the herdsman was buried was a newly exposed smudge in an otherwise unimpressive expanse of golden desert.

Carved into what appeared to be a bronze colored stone, or maybe some type of metal, was writing that had not seen the light of day for thousands of years. The carvings would have given anyone pause, for there was beauty in the craftsmanship, but also a strange feeling of foreboding.

And there was a reason for that, for within the ruins, or more specifically
under
them, was a place of death and untold suffering.

Iriya the Berserker by Hideyuki Kikuchi
Is That What People Do? by Robert Sheckley
Her Firefighter Hero by Leigh Bale
Forever Pucked by Helena Hunting
Lovers Never Lie by Morrison, Gael
With a Kiss (Twisted Tales) by Fowers, Stephanie
Payback by Melinda Metz - Fingerprints - 7
Deep in the Heart of Trouble by Deeanne Gist
Dust by Arthur G. Slade
JaguarintheSun by Anya Richards
Our partner