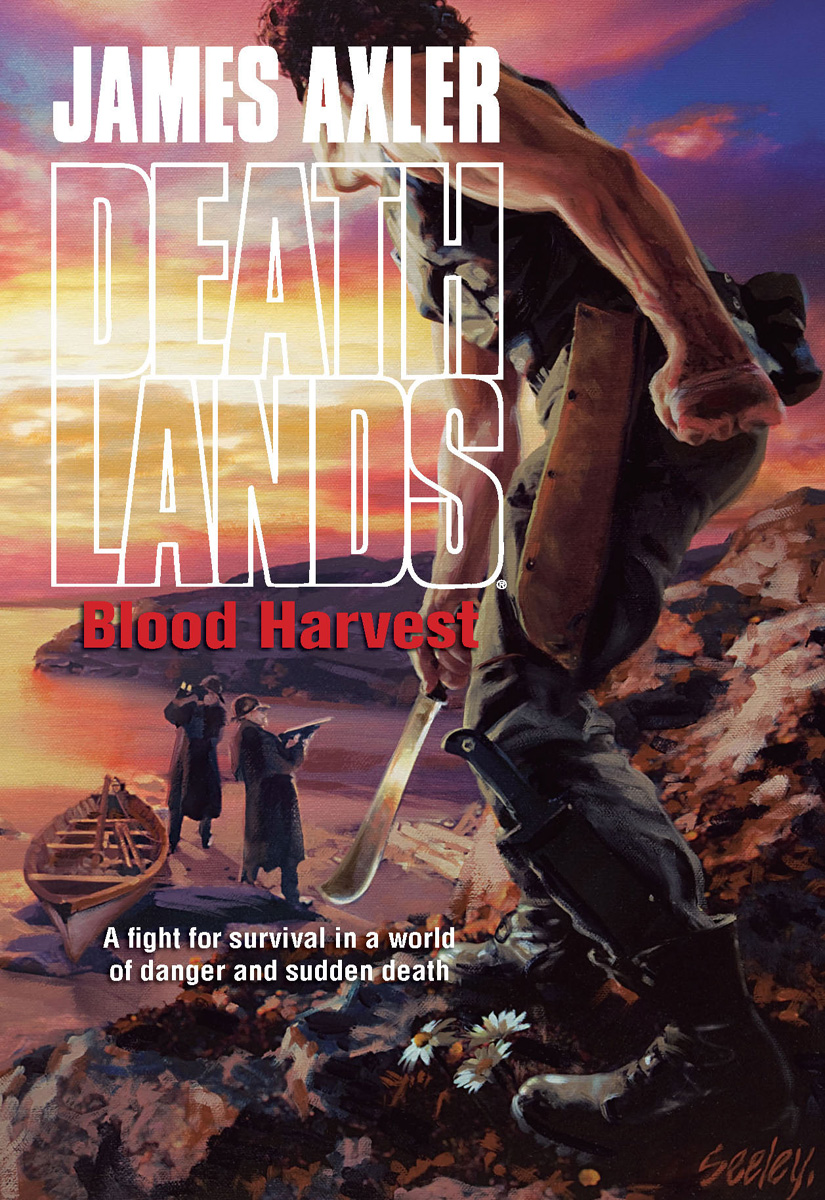 Krysty lay on her side, gasping

Her vision smeared back into beingâtripled, doubled and then finally was normal. She felt as if it had just rained hammers. Every cell of her body ached, and she tasted the copper of a nosebleed in the back of her throat. She reached out. “Ryanâ¦”

Krysty blinked at the afterimages behind her eyes and yawned at the ringing in her ears. “Ryanâ¦”

Every muscle screamed as she shoved herself up to her knees. Krysty snapped her glance around the jump chamber in a panic. She, Mildred, Jak and J.B. were in the same gateway of the same redoubt.

Ryan and Doc were gone.

Other titles in the Deathlands saga:

Keepers of the Sun

Way of the Wolf

O miserable man, what a deformed monster has sin made you! God made you “little lower than the angels” sin has made you little better than the devils.

This world is their legacy, a world born in the violent nuclear spasm of 2001 that was the bitter outcome of a struggle for global dominance.

There is no real escape from this shockscape where life always hangs in the balance, vulnerable to newly demonic nature, barbarism, lawlessness.

But they are the warrior survivalists, and they endureâin the way of the lion, the hawk and the tiger, true to nature's heart despite its ruination.

Ryan Cawdor:
The privileged son of an East Coast baron. Acquainted with betrayal from a tender age, he is a master of the hard realities.

Krysty Wroth:
Harmony ville's own Titian-haired beauty, a woman with the strength of tempered steel. Her premonitions and Gaia powers have been fostered by her Mother Sonja.

J. B. Dix, the Armorer:
Weapons master and Ryan's close ally, he, too, honed his skills traversing the Deathlands with the legendary Trader.

Doctor Theophilus Tanner:
Torn from his family and a gentler life in 1896, Doc has been thrown into a future he couldn't have imagined.

Dr. Mildred Wyeth:
Her father was killed by the Ku Klux Klan, but her fate is not much lighter. Restored from predark cryogenic suspension, she brings twentieth-century healing skills to a nightmare.

Jak Lauren:
A true child of the wastelands, reared on adversity, loss and danger, the albino teenager is a fierce fighter and loyal friend.

Dean Cawdor:
Ryan's young son by Sharona accepts the only world he knows, and yet he is the seedling bearing the promise of tomorrow.

In a world where all was lost, they are humanity's last hopeâ¦.

Ryan Cawdor and his companions needed little urging as they ran for their lives through the empty corridors of the redoubt. The facility they found themselves in was nothing but an empty concrete bunker. Whoever had occupied it had bugged out long ago and taken everything of value with them. Dead campfires, graffiti and bonesâhuman, animal and otherwiseâshowed there had been successive waves of habitation. At some point someone had managed to breach the main clamshell doors and then the interior ones. The spent shells of various makes littering the floors showed there had been many room-by-room firefights. It was odd that the victors hadn't bothered to retrieve the spent brass.

The companions' cautious venture outside the redoubt had drawn more stickies than the friends had shells to waste.

They raced for the mat-trans chamber. The pounding of their boots was counterpointed by the staccato slapping of scores of bare stickie feet behind them as the muties gazelled after them in rubbery, ground-eating bounds. “J.B.!” Ryan shouted. “Gren!”

The Armorer clawed into a pocket of his jacket as he ran and came out with his last grenade. “One!”

The party passed the corridor junction, and as they turned J.B. pulled the pin on the grenade. The cotter lever pinged away and he tossed the bomb behind them. The hollow crack of the detonation echoed in the halls. Stickies hooted and shrieked. They loved fire and explosions. Unless it ripped their heads off, even stickies directly caught in them didn't seem to mind so much.

The companions charged toward the corridor that led to the hexagonal mat-trans unit. Ryan stopped and shouldered his Steyr longblaster as his people went through the doorway that led to the control room. “J.B.! Close it!”

The door to the mat-trans was made of vanadium, and Ryan knew it would take powerful explosives to breach it. However, once it closed, the transportation cycle occurred, and Ryan wasn't quite ready to eliminate all other options. The chamber door didn't always lock. The outer door to the control room was ordinary steel. When the companions had arrived they had found the door jammed three inches ajar, and it had taken J.B. a good ten minutes of tinkering with the mechanism to get it to open. J.B. took a knee beside the inner control panel for the door and began fiddling with its guts.

J.B. twisted the exposed wires of the keypad together.

The stickies came around the bend in a fish-belly-white, boneless wave. Shrapnel scored some of the muties' bodies, but it wasn't slowing them. Doc stepped into the doorway and drew his LeMat revolver from beneath his frock coat. The weapon boomed as he fired the shotgun barrel, and the lead stickie's head was pulverized by the fist-size swarm of buckshot. Doc cocked the weapon again and pushed the hammer cone up to
fire the pistol chambers of the weapon. For Doc Tanner the choices of being torn limb from limb by stickies or taking a mat-trans jump were equally revolting propositions. He took aim and shot a second stickie between its huge, shark-black eyes.

Ryan cut loose. The range was swiftly closing to spitting distance, and he fired in rapid semiauto and went for the head shots. Pale skulls popped like pumpkins but more muties kept piling forward from behind. Even at close range the bobbing and weaving heads of the stickies weren't easy targets. The corridor filled with the gray clouds of Doc's ancient black-powder weapon as he methodically cocked and fired. He fired his last shot and stepped back. “Empty!”

Jak Lauren instantly stepped in and his .357 Magnum Colt Python began detonating like dynamite in the echoing confines of the corridor.

Wires sparked between J.B.'s hands. “Got it!”

Ryan and Jak stepped back as the steel door squealed and ground against the floor. Ryan's lips split into a silent snarl as the door shrieked, then stopped, leaving the same three-inch gap they had first found. “Fireâ¦Blast! J.B.!”

The Armorer threw up his hands. “The door's shot! No way will it shut.”

Everyone jumped back as the stickies hit the door in a wave. The jammed portal rang and rattled as dozens of stickies slammed their rubbery bodies against it. Others shoved their suckered hands through the gap and began heaving at the steel with grotesque, elastic strength.

Jak sighed as he pushed fresh shells into his revolver and stowed his empty brass. “Jump.”

Ryan eyed the door. He suspected it would hold, but Jak was right. They were low on food, water and ammo. The companions would have to come out sooner or later, and with low cunning the muties knew it, too. Ryan knew from hard experience that stickies could wait for days, days that his friends didn't have. Two jumps within an hour was as ugly as it got, but there was no way around it. “Yeah, we're jumping. We're jumping now.”

Krysty stared steadily at the mat-trans chamber. “Lover, I got a bad feeling.”

Ryan turned his single eye on his woman. Krysty Wroth was the most beautiful thing in his life. She was tuned in to Mother Earth, and he had learned long ago to trust her intuitions, but the fact was the mat-trans was the only way out. The one-eyed man ran a hand through the silken length of Krysty's scarlet tresses and her hair coiled around his fingers with a will of its own. Ryan smiled wearily. “Got no choice. We have to go.”

Her titian tresses coiled tighter around his hand. “There's something bad hovering on the other side.”

Ryan nodded. “Usually is.” He looked at the other companions. “Let's do it, and hope the stickies aren't smart enough to open the chamber's door.”

Krysty, Jak, J.B. and Mildred stepped within the glittering armaglass walls and selected a place to sit on the mat-trans's floor. Ryan turned a sympathetic eye on Doc as the old man stood at the doorway, staring at the mat-trans in trepidation. Dr. Theophilus Algernon Tanner had been ripped through time and space from the nineteenth century to the twentieth, where he had been mentally, physically and quantum mechanically experi
mented upon in brutal fashion until he had finally been flung forward a further century into the nuke-shattered America that had come to be known as Deathlands.

Doc had a low threshold for being dematerialized.

“Doc.” Ryan often had to remind himself that the damaged, old-man body encased a man his same age. “We've got to go.”

“I know.” Doc stepped boldly into the mat-trans unit, but his hands shook as he did it. “By all means let us be on our way.” Mildred held up her hand. He took it and sat on the floor beside her. Ryan stared in weary exasperation at the keypad in the wall. It did them no good. They had no destination codes for the matter-transfer device, so a jump in a mat-trans was a jump to anywhere. All they could do was activate the device by closing the door and hope for the best. Ryan depressed the lever. The door hissed shut and seconds later a mist began to coalesce as he strode across the chamber and sat beside Krysty. The disks in the floor and ceiling began to glow and flash. Doc groaned and buried his face in hands.

Krysty felt the pressure build up behind her eyes, and a roiling sensation began in the pit of her stomach. She brought a hand to her forehead as she felt the sucking darkness enveloping her. Ryan had once described the visual effect before the utter oblivion of dematerialization as patterns of red roses.

Krysty screamed as she saw lightning behind her eyes.

Something was terribly wrong. Her vision went black, but there was no momentary sense of oblivion. The lighting continued to crash inside her skull and she heard screams, some of which were her own. Her matter wasn't being transferred. Instead it felt as if a giant dog
had picked her up in its jaws like a shoe and was savagely trying to shake her into her component atoms. The sensation ended with the abruptness and brutality of an ax stroke.

Krysty lay on her side gasping. Her vision smeared back into being, tripled, doubled and then finally a slightly skewed normal. She felt as if it had just rained hammers. Every cell of her body ached, and she tasted the copper of a nosebleed in the back of her throat. She reached out a palsied hand. “Ryanâ¦”

Jak and J.B. were too busy puking to swear. Something in the female anatomy allowed a slight edge in withstanding the physical horror of a mat-trans jump but not by much. Krysty blinked at the afterimages behind her eyes and yawned at the ringing in her ears. “Ryanâ¦”

Every muscle screamed as she shoved herself up to her knees. Krysty snapped her glance around the jump chamber in a panic. She, Mildred, Jak and J.B. were still in the same gateway of the same redoubt.

Ryan and Doc were gone.