Read Blood Infernal: The Order of the Sanguines Series Online

Blood Infernal: The Order of the Sanguines Series 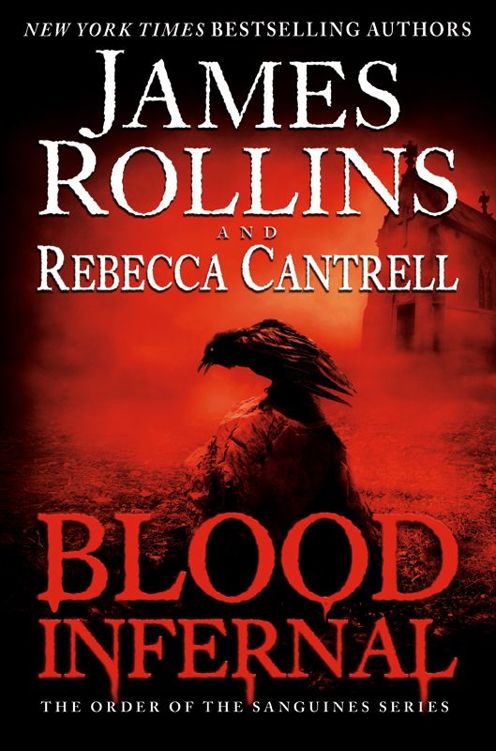 James:
To Rebecca, for joining me on this journey

Rebecca:
To my husband and son

“How are thou fallen from heaven, O Lucifer, son of the morning! how are thou cut down to the ground, which didst weaken the nations!”

Inside his hidden lab, the English alchemist known as John Dee stood before a giant bell made of flawless glass. It rose tall enough for a man to stand upright within its inner chamber. The wondrous work had been fashioned by an esteemed glassmaker on the faraway island of Murano, near Venice. It had taken a team of artisans over a year, using massive bellows, and a technique known only to a handful of masters, to spin and blow a colossal pearl of molten glass into this sculpture of perfection. Afterward, it had taken five additional months to transport the precious bell from its island birthplace to the cold court of Holy Emperor Rudolf II in the far north. Upon its arrival, the emperor had ordered a secret alchemist’s laboratory to be built around it, surrounded by additional workshops that extended far beneath the streets of Prague.

The bell now stood atop a round iron pedestal in the corner of the main laboratory. The pedestal’s edges had long since gone red with rust. Near the bottom half of the bell stood a round door, also of glass, fastened on the outside with strong bars and sealed so that air could neither enter nor escape.

John Dee shuddered where he stood. Although he was relieved by the coming completion of his task, he dreaded it, too. He had grown to hate the infernal device, knowing the horrific purpose behind its forging. Of late, he avoided the bell as much as he could. For days he would putter around in his lab, his long tunic stained with chemicals, his white beard nearly dipping into his flasks, his rheumy eyes averted from the bell’s dusty glass surface.

But now my mission is nearly complete.

Turning, he stepped to the fireplace and reached to its mantel. With gnarled fingers, he worked the elaborate catches to open a small chamber carved into the marble. Only he and the emperor knew of the tiny chamber’s existence.

As he reached inside, a frantic knocking arose behind him. He turned back to the bell, to the creature that had been imprisoned inside it. The beast had been captured by men loyal to the emperor, dragged here only hours ago.

I must work quickly
.

The ungodly beast beat against the inside of the bell, as if it sensed what was to come. Even with its preternatural strength, it could not break free. Older and far stronger creatures had tried and failed.

Over the past years, John had caged many such beasts inside that glass cell.

Though he knew he was safe, his feeble heart still raced, the animal part of him sensing the danger in a way that his logical mind could not gainsay.

He let out a shaky breath, reached into the secret chamber of the mantel, and drew out an object wrapped in oilcloth. The prize was tied with a scarlet cord and encased inside a wax shell. Careful not to crack the waxy covering, John carried the bundle to the draped window, clutching it close against his chest. Even through the cloth and wax, a dreadful coldness emanated from the object and numbed his fingers and ribs.

He opened the thick curtains a crack, allowing in a shaft of morning sunlight. With trembling hands, he placed the package in the pool of light that fell atop his stone desk and positioned himself on the other side of the bundle so that not the smallest shadow fell upon the object’s surface. He drew a sharp flensing knife from his belt and cut through the wax and the scarlet cord. With great care, he parted the oilcloth as flakes of white tallow broke off and fell to his desk.

Early-morning Czech sunlight shone on what lay revealed inside the cocoon of wax and cloth: a beautiful gemstone, as large as his palm, glowing an emerald green.

But this was no
emerald
.

“A diamond,” he whispered to the silent room.

The chamber had gone quiet again as the creature inside the bell quailed away from what shone upon his desk. The beast’s eyes darted around as light reflected from the gem and formed shimmering emerald veins across the plaster walls.

John ignored the prisoner’s fear and instead stared into the heart of the diamond at an inky darkness roiling inside. It flowed like a mix of smoke and oil, a living thing, as trapped inside the diamond as surely as the creature was inside the bell.

Thank God for that
.

He touched the icy gem with one finger. According to legend, the stone had been quarried from a mine deep in the Far East. Like all great stones, this one was said to carry a curse. Men had killed to possess it, dying soon after it came into their hands. Smaller diamonds mined from that same vein graced the crowns of faraway rulers, but this one had not been put to such vain use.

Carefully, he lifted the green diamond. Decades had passed since he’d had it hollowed out. Two jewelers had lost their eyesight using tiny diamond-tipped drills to create the empty space inside the stone’s luxuriant green heart. A sliver of bone so thin it was almost translucent stoppered the small opening—a bone fetched from a Jerusalem tomb over a thousand years before—the last intact piece of Jesus Christ.

Or so it was claimed.

John coughed. The metallic taste of blood filled his mouth, and he spat into a wooden bucket he kept near his desk. The disease that ate him from within left him little peace these days. He struggled for breath, wondering if this time the breath would fail to come. His lungs wheezed in his chest like a broken bellows.

A muffled knock against the door startled him, and the stone slipped between his fingers and fell to the wooden floor. He lunged toward the precious green object with a cry.

The stone landed on the floor, but it did not break.

Pain lanced from John’s heart into his left arm. He fell against the desk’s stout leg. A beaker of yellow liquid crashed to the floor and spread across the boards. Smoke rose from the edge of a bearskin rug laid out on the floor.

“Master Dee!” A young voice sounded from the other side of the door. “Are you hurt?”

The lock clicked, and the door swung open.

But the young man had already rushed inside, coming to his master’s aid. He lifted John from the floor. “Are you ill?”

John’s disease was beyond the skill of even the most powerful alchemists in Emperor Rudolf’s court to heal. He struggled for breath, letting the boy hold him upright until at last his coughing quieted. But the sharp pain in his chest did not lessen as it usually did.

The young apprentice touched John’s sweaty brow with gentle fingers. “You have not slept this last night. Your bed was untouched when I arrived this morning. I came up to check—” Vaclav’s voice broke off as he glanced toward the glass bell—and discovered the creature imprisoned inside. It was a sight never intended for his young, innocent eyes.

A gasp escaped Vaclav’s lips, a mix of surprise and horror.

She stared in turn back toward the boy, a hunger in her gaze as she placed a palm against the glass. A single fingernail scratched at the surface. She had not fed for days.

Vaclav’s gaze took in the woman’s naked body. Wavy blond hair fell past her round shoulders, tumbled across bare breasts. She could almost be considered beautiful. But in the faint light from the curtains, the thick glass gave her snow-white skin a green cast, as if she had already begun to decay.

Vaclav turned to John for some explanation. “Master?”

His young apprentice had come into his service as a clever little boy of eight. John had watched him grow into a young man with a bright future ahead of him, skilled at mixing potions and distilling oils.

John loved him like one of his own sons.

Still, he did not hesitate as he lifted the sharp flensing knife and slashed the boy across his throat.

Vaclav grabbed at his wound, his eyes pinned to John’s by disbelief and betrayal. Blood flowed between his fingers and spattered onto the floor. He sank to his knees, both hands seeking to catch his life’s blood.

The creature in the bell hurled her body against the sides with such force that the heavy iron pedestal rocked.

Do you smell the blood? Is that what excites you so?

John bent to gather up the fallen green stone. He held it up to the sunlight to check the seal. Darkness rolled inside, as if seeking a crack, but there was no exit. He made the sign of the cross and whispered a prayer of thanks. The diamond remained intact.

John placed the stone back in the sunlight and knelt next to Vaclav. He stroked curly hair back from the young man’s face.

John could never explain it to the boy, never atone for his murder. He cupped his apprentice’s cheek. “I would that you had not seen this. That you had lived a long life of study. But that was not God’s will.”

Vaclav’s bloodstained fingers fell from his throat. His brown eyes eight. John had watched him grow into a young man with a bright fututurned glassy with death. With two fingers, John closed the boy’s warm eyelids.

John bowed his head and muttered a quick prayer for Vaclav’s soul. He had been an innocent, and he rested in a better place now. Still, it was a tragic waste.

The thing in the glass bell, the monster that had once been human, met his eyes. Her gaze flickered to Vaclav’s body, then back to John’s face. She must have read the anguish there because, for the first time since she had been delivered to him, she smiled, baring long white fangs in clear delight at his misfortune.

McQueen's Agency by Reynolds, Maureen
Books Can Be Deceiving by McKinlay, Jenn
Time-Travel Bath Bomb by Jo Nesbo
Conflicted (The Existing Series Book 2) by Guilliams,A.M.
The Phoinix: Age of Demigods by S. L. Mancuso
I Used to Say My Mother Was Shirley Bassey by Stephen K Amos
Strike Out: Mustangs Baseball #6 by Roz Lee
Playing for Keeps by Dara Girard
Bones of Faerie03 - Faerie After by Janni Lee Simner
Doomsday Warrior 19 - America’s Final Defense by Ryder Stacy
Our partner