Read Blood of Others Online 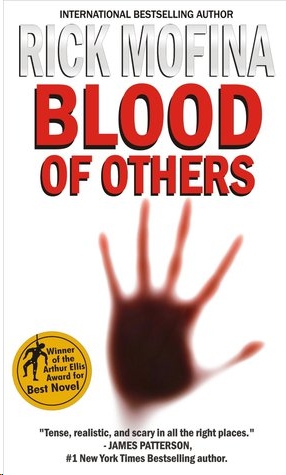 Praise for the novels of Rick Mofina

"Another riveting read from one of the leading thriller writers
of the day." -
Penthouse

"Bursts with suspense. The action is so intense, the writing so
realistic, it's as if we are there during the search. This is a book to cause
icy shivers." - RT BookReviews Magazine

"If you buy it for the flight, you'll be reading it on the
escalator." -
National Post

"Guaranteed to keep readers flipping the pages." -
The
Toronto Sun

"Vengeance Road is a thriller with no speed limit! It's a great
read!" - Michael Connelly, #1
New York Times
bestselling author

THREE TO THE HEART
(Anthology)

Pray for
me; and what noise so ever yea hear,

come not
unto me, for nothing can rescue me.

--
The
Tragical History of Doctor Faustus
(1604) by Christopher Marlowe

This
is a work of fiction. Names, characters, places and incidents either are the
creation of the author’s imagination or are used fictitiously, and any
resemblance to actual persons living or dead, business establishments, events
or locales is entirely coincidental.

This
e-book is intended for your personal enjoyment only. This e-book may not be
sold or given away to other people. If you’re reading this e-book and did not
purchase it, please return to Amazon.com and purchase your own copy.

Iris Wood
studied death every day of her life.
Helping people confront it was what she did for a living. But tonight she was
facing her own fears head-on. And she was losing.

Driving home after her first
night course at San Francisco State University, Iris was adrift in the
darkness. She rarely travelled this far south in the city. Her world was
limited to the boundaries of her apartment in the Western Addition and her
researcher’s job in a downtown office building on Montgomery.

Her decision to attend an
introductory astronomy class at SFSU was a brave new personal step. Not because
she was interested in the stars, but because she needed to venture beyond her
solitary universe, something made painfully clear to her weeks ago at the last
office party where the resident busybody cornered her before she could escape.

“You never stay at our
parties, Iris. You’re so mousy in your cubicle, most of the time we don’t even
know you are here. Have some wine, dear.”

“No, I really should be going.
I have someone waiting at home.”

“No. I don’t. I’m living with
somebody. My boyfriend.”

“You have a boyfriend? Since
when, Iris? You never told me.” Miss Busybody grinned as she sipped her wine.

In the elevator Iris’s face
reddened, stinging with the realization of how pathetic she was. That night at
home she fought her tears while working on her computer. Jack, the four-legged
male in her life, plopped himself in her lap, purring and nudging at Iris to
overcome her shyness and wade into the real world.

Now, here she was, lost in it.
This was exactly what she had feared. She left the map she had made back in the
lecture hall. Her attempt to navigate from memory was futile after a dozen
blocks or so. She took the wrong exit from the campus, meandering on Lake
Merced, Middlefield, Sloat, and Crestlake. How did this happen? The fog from the
Pacific didn’t help. This was silly. Getting back should be a no-brainer. If
she could just get back on Nineteenth Avenue, it would take her right to Golden
Gate Park, and from there she knew she could find Fulton, then east to her
apartment near Alamo Square, in time to curl up and watch
Sleepless in
Seattle.

Where are you Nineteenth
Avenue?

Could ask somebody for directions
but the streets seem deserted tonight. Besides, she didn’t really want to
approach anybody. She pressed the automatic lock button again before seeing a
flashing emergency light in her rear-view mirror. It came out of the shadows.
She pulled her car over and was bathed in pulsating red from the dash-mounted
police light of the unmarked car that stopped behind her.

“Evening, ma’am,” said the man’s
voice from behind the intense flashlight beam.

“Did I do something wrong,
Officer?” She squinted.

“Your license
and registration, please.”

Iris switched on her dome light,
producing the items from her wallet. The officer put them on his small
clipboard, then directed his flashlight on them.

“You drove through an
intersection, missed the stop sign.”

“Happens all the time. Where are
you coming from tonight, ma’am?”

“You consume any alcohol
tonight?”

The flashlight was directed at
her face.

“Would you please shut off your
ignition and step out of the car.”

Iris saw a pale half-moon peeking
through the clouds as she stood before the tall officer. His face was darkened
by the night, distorted by the strobing red light of his patrol car. From what
she could see amidst the fog, they were situated near a heavily treed park.

“Would you please count aloud
backwards from one hundred while walking heel to toe in a straight line for me,
ma’am?”

Iris accomplished it without
difficulty.

“Thank you, ma’am. I am going to
have to cite you for the stop sign. You can wait in your car, or in my cruiser.
It won’t take long, but I will require your signature after I run a check on
your particulars.”

The area was a little creepy so
Iris opted to wait in the police car then get directions home. The officer opened
the rear right passenger door.

She thought it odd how the car
did not seem to have a police radio crackling or any other police equipment. In
fact, it had that new-car smell and a plastic recycle bag from a rental agency.
The red emergency dash light was almost blinding. She still couldn’t see the
officer’s face as he wrote up her ticket from behind the wheel.

“Ma’am, can I ask you a personal
question?”

“What exactly do you look for in
a man?”

She had heard this question
before. But where?

“I’m not sure I understand.”

“Jack, the guy you’re living
with. Or should I say, cat.”

She was dumbstruck. Paralyzed.
How
could he possibly know…

“The back doors have child-safety
locks. Won’t open from inside.”

Iris swallowed, meeting his eyes
in the rear-view mirror.

“You know, Iris, people shouldn’t
lie to other people. It always catches up with them in the end.”

Iris could not speak. Her blood
was pounding in her ears. The stranger grunted, turning in his seat, gripping a
device that looked like an electric razor, suddenly pressing it against her
neck, instantly overwhelming her neuromuscular system, disorienting her until
she collapsed.

He switched off the red light,
then drove away, vanishing into the fog with Iris Wood in his back seat.

Kris Longknife 13 - Unrelenting by Mike Shepherd
Domestic Affairs (Tiara Investigations Mystery) by Stone, Lane
Briefing for a Descent Into Hell by Doris Lessing
The Trouble with Bree (Spotlight #1.5) by Kristen Strassel
PursuedbythePrisoner by Ann Mayburn
Hamfist Over the Trail by G E Nolly
Thunder on the Plains by Gary Robinson
The Reckoning by Jeff Long
The Babe Ruth Deception by David O. Stewart
Dark Domination (Bought By the Billionaire Book 1) by Lili Valente
Our partner