Read Blood of the Isles Online

Blood of the Isles 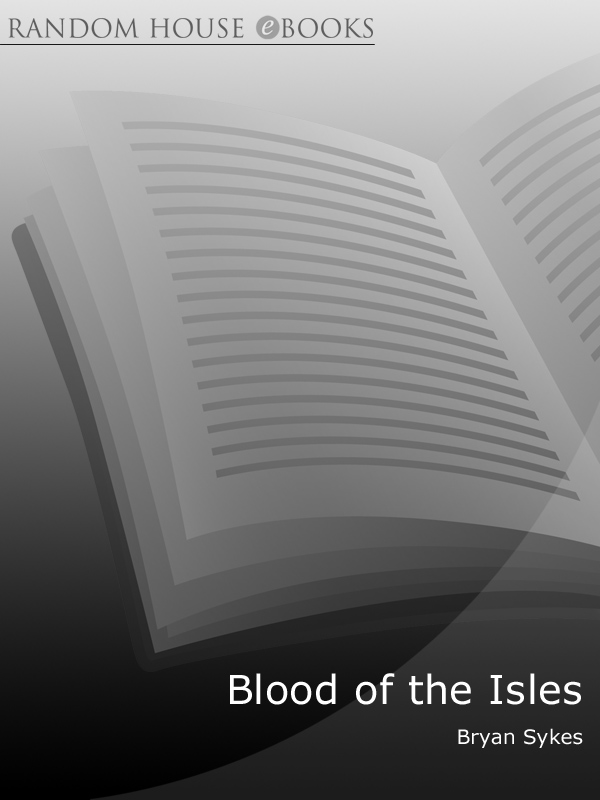 When the first Roman soldiers invaded Britain in 54 BC, the Isles were inhabited by Celtic tribes. Five hundred years later, the Romans were succeeded by the Anglo-Saxons, the Vikings and then the Normans. History has long taught us that the Celts were wiped out by the more sophisticated aggressors, but Bryan Sykes, the world’s first genetic archaeologist, found that the evidence told rather a different story.

In a major research programme, he and his team at Oxford University tested the DNA of over 10,000 volunteers from across Britain and Ireland in order to pin down the genetic make-up of 21st century Britain.

What do our genes tell us about our tribal past? Did the invaders keep mostly to themselves or are the modern people of the Isles a delicious genetic cocktail? And most importantly, where do you fit in?

A gripping detective story backed up by fascinating science,
Blood of the Isles
casts new light on our ancestry and reveals what our genes can tell us about our attitudes to ourselves, each other, and to our past.

Bryan Sykes, Professor of Human Genetics at the University of Oxford, has had a remarkable scientific career. He was the first to discover, in 1989, how to recover DNA from human remains thousands of years old and he has been called in as the leading international authority to examine several high-profile cases, such as the Ice Man, Cheddar Man and the many individuals claiming to be surviving members of the Russian Royal Family. Since then he has worked extensively on the origins of peoples from all over the world, using DNA from living people as well as from archaeological remains. He proved that the origin of Polynesians lay in Asia, not America, and discovered that the ancestors of most Europeans were hunter-gatherers from before the last Ice Age. He also showed that most Europeans trace their maternal genetic ancestry back to only seven women. On the male side he was the first to show the close connection between DNA and surnames, a discovery that is revolutionizing genealogy.

Bryan Sykes is the founder and chairman of Oxford Ancestors (
http://www.oxfordancestors.com
), which uses DNA to help explore your own genetic roots, including the tribal affinities described in
Blood of the Isles
.

He is also the author of
The Seven Daughters of Eve
and
Adam’s Curse
.

In a unique first, Bryan Sykes is simultaneously publishing the detailed genetic results that led to his conclusions on the internet at
www.bloodoftheisles.net
.

and published by Corgi Books

BLOOD OF THE ISLES

Exploring the genetic roots of our
tribal history

Bryan Sykes has asserted his right under the Copyright, Designs and Patents Act 1988 to be identified as the author of this work.

This book is a work of non-fiction and based on the experiences and recollections of the author. The author has stated to the publishers that the contents of this book are true.

To my son Richard, companion on very many journeys

7. The Nature of the Evidence

9. The DNA of Ireland

The research that led to
Blood of the Isles
was a team effort. I had a wonderful team both in the field and in the lab. Eileen Hickey, Emilce Vega, Jayne Nicholson, Catherine Irven, Zehra Mustafa, John Loughlin, Kay Chapman, Kate Smalley, Helen Chandler and Martin Richards all criss-crossed the Isles in pursuit of DNA, while Lorraine Southam, Sara Goodacre and Vincent Macaulay helped to tease out its secrets in the lab. I relied on many people’s generosity in the search for our origins. The directors and staff of the Scottish Blood Transfusion Service deserve special mention for their enthusiastic backing and for their tolerance as we invaded their otherwise tranquil donor sessions. The head teachers and the staff of the very many schools we visited, particularly in Wales and Shetland, I thank for the same reasons. Talking of Shetland, I must thank Beryl Smith, who organized all our visits there in advance. But, of course, none of this would have been remotely possible without the consent and co-operation of the many thousands of volunteers who agreed to having their DNA taken and analysed.

Among professional colleagues, I am particularly grateful to Dan Bradley of Trinity College Dublin for advance access to Irish genetic data, though I should stress that I have only used published material here and also that any conclusions are my own and not necessarily Dan Bradley’s. So blame me and not him. I have also benefited from the publications of Jim Wilson and Mark Thomas from University College London, who have produced very useful data from parts of Britain. Among my friends and colleagues in Oxford, William James has, as usual, been a rich source of ideas and creative conversation. I must also mention Robert Young, recently of Wadham College, who introduced me to the racial mythology of the English, a subject of which I was almost completely unaware until he sent me a reprint of his work. Norman Davies, a fellow of my own college, Wolfson, was not only a source of bountiful historical references in his magisterial
The Isles – a History
(never has a book been more thoroughly thumbed), but also helped me resolve the tricky issue of what to call my own book.

But words are not enough. Books need midwives before they see the light of day. My agent Luigi Bonomi has kept me going throughout with his irrepressible enthusiasm and I am, once again, very fortunate to have in my editors Sally Gaminara and Simon Thorogood not just consummate professionalism but great encouragement as well. Thanks too to Brenda Updegraff for her immaculate copy-editing and, as before, to Julie Sheppard who rapidly transformed my erratic handwriting into legible text.

But most of all I thank the Muse without whom nothing flows.

English supporter at the World Cup, 2006:

Once You Break a Knuckle by W. D. Wilson
Plague by Graham Masterton
In My Sister's House by Donald Welch
The Dead Don't Dance by Charles Martin
Burn Me if You Can by Mahalia Levey
Deadly Satisfaction by Trice Hickman
Taken (A Bad Boy Romance Book 1) by Scott, Amanda
Lost in Her by Sandra Owens
Alpha Threat by Ron Smoak
Post Apocalyptic Ponies: Revolutions Per Mile, Book 1 by Isherwood, E.E.
Our partner