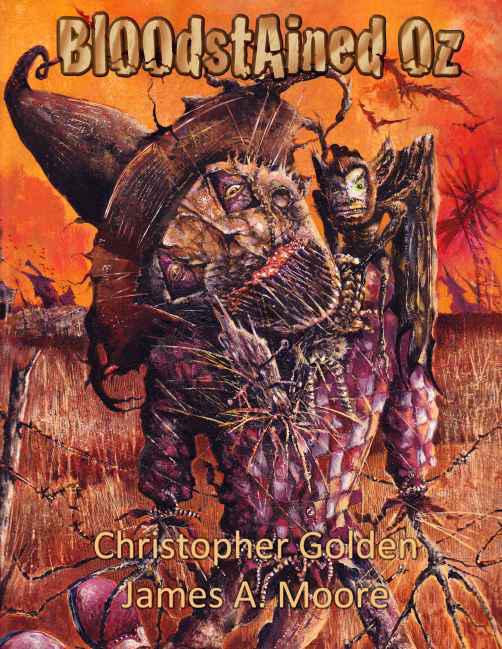 This
book is a work of fiction. Names, characters, places and incidents are either a
product of the authors imagination or are used factiously. Any resemblance to actual
persons or events, living or dead, is entirely coincidental.

Introduction: We’re Not in Oz Anymore

Sometimes I feel like I’m from a different world. When I was
a little boy, we had three television stations, no more. Later, cable came
along, giving us several more stations. If you wanted to see a movie, you had
to see it while it was showing at the theater. If you missed it during its
first run, maybe you could catch it during its second or third run, but only if
it was popular enough to
have
a
second or third run. After that, you had to wait a year or two for it to show
up on network television, heavily edited to fit in all those commercials and
cropped to fit your TV screen.

Then there was
The
Wizard of Oz,
which showed up once a year, every year, on television.
Those showings were big events for my friends and I. We never missed them. We
talked about the movie in anticipation of each showing, and then we talked
about it long after it had shown.

The Wizard of Oz
was then, and remains
today, my all-time favorite movie. It has everything—it has laughs, it’s
filled with wonder and magic, and it’s scary as hell. No matter how many times
we saw it, my little friends and I never failed to be terrified by that witch
and her damned flying monkeys.

Along with
Peter
Pan, The Wizard of Oz
was my favorite childhood story for all the same
reasons the movie
was my favorite movie. It had everything. Even more than the movie, the
book had gore—chopped-off heads rolled aplenty in the book.

But back to the movie. It showed every year, and we
children looked forward to it like some kind of religious event. For those two
hours, time stopped and everything else was dropped so we could watch it. We
were transported from our living rooms to a magical land of witches and
Munchkins and cranky apple trees.

Now, of course, things are very different. Movies
don’t have second and third runs in theaters. They run once, and are heavily
dependent on their opening-weekend take. Then they go to the video store months
later, then to Pay-Per-View, then to cable.

The Wizard of Oz
still plays once a year on
TV, but it just isn’t the same. You don’t have to wait for that annual network
run to see it—you can rent it at the video store anytime you want to see
it, or maybe take it off your own shelf and view it whenever the mood moves
you.

Somehow, this has leeched some of the magic from the
viewing experience. There was something very exciting about being able to see
the movie only once a year. Now, somehow, it’s just another movie, like all the
rest. It’s still my all-time favorite, but it’s no longer a movie so special
that you can only see it once a year on TV.

I’ve seen the movie countless times. I can sing the
songs and recite the dialogue along with the actors, as I’m sure millions of
others can. I still get a lump in my throat when

Judy Garland sings “Somewhere Over the Rainbow.” And
I still get a little misty-eyed when it comes time for Dorothy to leave her new
friends behind in Oz. It’s a remarkable picture that has withstood the test of
time, and will, I’m sure, continue to do so for generations to come. The movie
and the books have always—as a child and even as an adult—given me
a feeling of comfort. They have always made me feel somehow
safe.

I bring all this up in order to discuss
Bloodstained Oz.
We’ve all seen the
movie dozens of times, and many of us have read the Oz books. Christopher
Golden and James A. Moore
know
this,
and they have decided to
punish
us
for it. They have decided to take our love for this timeless, magical story and
use it to fuck with our heads. They have set out to use the familiar elements
of Oz to scare the living shit out of us.

And they have succeeded.

Now that I’ve read this novella, I will never be able
to look at Oz the same way again. When I watch the movie or read the books, I
will forever have
Bloodstained Oz
peering
over my shoulder and whispering in my ear in a hissing, sibilant voice,
You’re not safe anymore.

With beautifully understated prose, Golden and Moore
take an ax to one of the most beloved stories ever written. They take delight
in moving its characters and creatures from our dreams to our nightmares.

Bloodstained Oz
is one of the creepiest
pieces of fiction I’ve read in a long, long time, and it’s going to take awhile
to shake it from my mind. It doesn’t pull any punches. It doesn’t give the
reader a break. It’s relentless and terrifying, and that’s all I’m going to
tell you about it.

Think of all the wonderful memories you have of
The Wizard of Oz.
Think of all the
times you watched the movie as a child and the delight you took in the
Technicolor Munchkins and Glinda the Good Witch and the dancing Scarecrow and
the poor Tin Man who longed for a heart and the Cowardly Lion who so wanted to
be king of the jungle. Think of the times your mother read the book to you, or
the times you read it yourself. Think of how much you’ve come to love that
story.

By the summer of Nineteen Hundred and
Thirty Three, the good people of Hawley, Kansas, had tucked all their hope for
the future into attics and storm cellars and other places where you put things
you tell yourself you might need someday, but really are just too sentimental
or practical to throw away. It was more than a hardscrabble life. It was a
dry, dusty bit of hell. But nobody in Hawley was foolish enough to predict that
things couldn’t get worse. If there was one thing they’d learned in the past
two years, it was that things could
always
get worse.

The 1920s had been the boom time.
Demand for wheat was sky high and prices soared. Millions of acres of Great
Plains farmland were plowed under to plant wheat. Nineteen Hundred and Thirty
One had brought a bumper crop, – twelve million bushels –
according to the papers. So much damned wheat that prices plummeted from
sixty-eight cents a bushel the year before, to twenty-five.

Farms shut down; fields were abandoned,
as those who couldn’t adapt drifted away, spirit broken.

But most of the folks in Hawley had
faith in the land. They’d seen the hardest of times when they’d arrived in
Kansas and built towns where there’d been only grasslands before. Pioneer
spirit remained. The pioneers had known how to survive. Prayer at sunup and
sundown; sweat and grit all the day long.

Farmers increased their herd of milk
cows, sold the cream for the money to survive, and fed the skimmed milk to
chickens and pigs. But it wasn’t just the price of wheat that scoured the
land.

It was the wrath of God.

That’s what Gayle Franklin’s daddy told her. “The wrath of God, Sugar,
that’s what it is. We were supposed to take care of the land. Hell, ain’t
that why He put us here in the first place? But folks got greedy.”

Gayle was afraid of God.

’30 had been a dry year, but it only got worse. All those abandoned
fields went to dirt. Bart Franklin told his little girl he’d never seen anything
like the winds that swept the land, the storms that went through from time to
time. Biblical weather, he called it. Hundred-degree heat, drought, and far
too often a blow that would choke what crops remained with dirt stirred up from
the parched land.

The dust bowl, they called it.

Once, when he’d had a bit of whiskey, Gayle heard her daddy say the
phrase made it sound quaint, almost pleasant; that they weren’t living in the
dust bowl, they were living in Hell. She was never sure if he meant it.

But sometimes she wondered.

Wheat and other crops failed, the ground too dry to nurture them, and
farmers in Hawley took to harvesting thistles. When the thistle crop failed,
other folks quit and ran. But not Gayle’s mother and father. They were
survivors. They went out onto the land and dug up soap weed from the chalky
earth, chopped it up in a feed mill and fed it to the animals. Mr. Yancey,
their nearest neighbor, tried to make a go of it as well. His son Chester
found him dead under the hot sun, his heart burst.

There were blizzards and tornadoes and dirt storms that swept across
the plains like the End of Times, huge black clouds that turned day into night
and tore from the ground much of the year’s plantings. Still, the pioneers
survived – those who would not surrender to despair or to the elements.

Inside the farmers of the dust bowl, the
people of Hawley, Kansas, and inside the secret heart of Gayle Franklin, was
the unspoken certainty that whatever hardship was heaped upon them, they would
survive. Gayle’s daddy had set her a fine example in that regard.

Things might get even worse, but
somehow, they were sure, faith would carry them through; in the land, and in
themselves.

It was a foolish notion.

On a scorching July afternoon,
nine-year-old Gayle sat on the front porch of the house and stared down at her
dirty feet. She had a glass of water in her hand and she took a sip, running
her tongue over her chapped lips and savoring the wetness of the water. Warm
as it was, it was still cool compared to the day. With a glance around to make
sure no one was watching, she spilled a few drops on her left foot, watching in
fascination as the water made dark streaks of the dirt on her skin. Her daddy
would tan her behind if he saw her wasting water, when they’d had no rain for
near a month. But it felt nice, and the look of it was interesting.

The wind gusted, rattling the storm
door. With a deep frown, the little girl looked up and turned west, the
direction from which the wind had come.

The horizon was dark from earth to
heaven. The black, churning dirt storm was eating up blue sky as it moved
across the land. Gayle’s first thought was that at least there might be some
rain. But if the storm was bad, there’d be no crops left to soak it up.

Another gust hit her and her hair
whipped wildly about her head. Grit stung her eyes and she reached up to wipe
it away. Behind her the storm door slammed over and over.