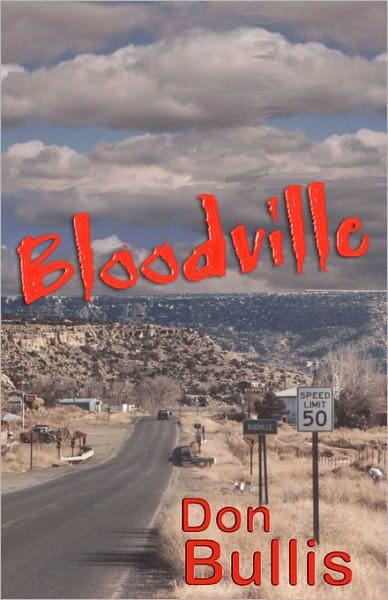 Copyright 2002 by Don Bullis. All Rights reserved.
No part of this book may be reproduced in any form or by any electronic or mechanical means including information storage and retrieval systems without permission from the author, except for the inclusion of brief quotations in a review.
Although this work was inspired by an actual event, it is a work of fiction and the characters depicted are fictional. Any resemblance to people living or dead is purely coincidental.

The coverdesign is by Dr. Bud Banis based on photographs by Don Bullis.

an Imprint of
Science & Humanities Press

Dedication
This book is dedicated to Gloria Bullis, my wife and partner in all things.
Acknowledgements

Dozens of people shared their memories of the Rice/Brown killings with me, and I thank each of them for their generosity in time and their willingness to help. In particular I would like to thank Judge H. Vern Payne who knows more about the case than anyone else, and who provided me with the greatest insight regarding the matter. I also thank Joe Garcia, Jr. of Budville, New Mexico (now deceased) and Phil Bibo of Grants, New Mexico, both of whom knew just about everyone involved.

BOOK ONE
CHAPTER I

―Go ahead!‖ Bud Rice bellowed. His voice shook with anger. ―I don‘t give a damn!‖
The first shot missed. A second quickly followed and it missed, too. A spasm of hope swept over the storekeeper as the bullets whizzed passed his head. Maybe he‘d live.... But no! A third slug tore through his neck. So did a fourth and a fifth. The merchant‘s hard gray eyes revealed nothing—not fear, nor rage, nor pain—as bullets ripped his fragile flesh. Blood, bone and tissue erupted from the back of his neck and splattered the trading post wall. The slugs drove him backward by a half step before his knees buckled and he dropped to the floor. He lay there, unmoving, as his carotid artery spurted blood like a fountain for a few seconds. Then his heart stopped pumping.
Two gray-haired women watched from the end of the counter, near the cash drawer. The older woman, immobilized by shock and fear, screamed something the killer didn‘t understand—his ears rang from the crash of the gun‘s reports—and she raised her arms to cover her eyes, as if not seeing the killer would make him go away. She took a step backward. The gunman fired two quick shots and ninemillimeter bullets ripped holes in her chest and neck. She staggered, then fell, her face a mask of hopeless surrender to death. The woman lay still as blood pooled around her body and soaked into her housedress. She lived another thirty seconds before life left her.
The younger woman ran away and hid.
The killer blew smoke from the pistol‘s barrel as he‘d seen bad guys do in western movies. He followed the second woman through a door at the rear of the Budville Trading Post, a door that led to the Rice living quarters.

Housed in a white, one story, cement block building with a low pitched roof, the trading post sat behind a wide gravel driveway and gas pump island thirty feet from the shoulder of U. S. Route 66. Two large windows and two smaller ones, all trimmed in red, were spaced equally on either side of a heavy Dutch door. A big red and white sign that read

rested on two vertical iron pipes twelve feet high and perpendicular to the road. The tallest structure in the village, Rice‘s sign was visible for a half mile in either direction on Route 66 and from the Cubero Road, too.

The trading company Bud Rice operated consisted of a small grocery store, Phillips 66 gas station, wrecker service, auto salvage yard and auto repair garage. Rice also owned the local New Mexico Motor Vehicle Department concession and he contracted with Continental Trailways to sell bus tickets. Bud dealt in Indian pawn jewelry on the side, but that business had fallen off in recent years because he‘d cheated so many Indians that few would entrust their pawn to him. He also dabbled in real estate and owned assorted small business and residential rental properties. Until a few years before, he‘d served as Justice of the Peace and on the day he died he carried a Valencia County deputy‘s commission given to him by Sheriff Jack Elkins and an honorary State Police badge given to him by Deputy Chief Charlie Scarberry.

Local legend held that Bud Rice made a million dollars off the tourists on Route 66—known locally as the Old Road—and that he kept large amounts of cash stashed around the trading post. Everyone acquainted with him knew he carried a big roll of currency in his right front pants pocket. He never flashed it but he wasn't shy about peeling off a ten-spot to pay for a nickel pack of Black Jack chewing gum either.

Rice prided himself on knowing the first name of every police officer—tribal, municipal or state—and sheriff's deputy in Valencia County. He also had a close friend in Santa Fe in the person of State Police Lieutenant Colonel, and Deputy Chief, Charles Scarberry. They‘d become friends fifteen years before as a result of a common interest. Money. For many years the State of New Mexico paid Justice of the Peace Bud Rice five dollars for every traffic violator he adjudged guilty and fined. He customarily shared the bounty with police officers who brought miscreants before his petit court. Deputy Chief Scarberry, as a young patrolman, delivered hundreds of traffic violators to Bud Rice. The conviction rate in the Budville J. P. Court, year after year, stood at exactly one hundred percent.

Rice had another reason for getting along with deputy sheriffs and State Police officers: he depended on them to call him to auto accidents for wrecker service and to tip him off when they spotted cars abandoned along the Old Road. Envelopes containing cash rewards passed from Bud Rice to grateful, and poorly paid, State Police officers. As things worked out, Bud towed more automobiles and semi trucks than either of his two competitors: one in Grants, 25 miles west, and the other at Rio Puerco, 35 miles east. He did more towing and stored more cars than the two of them combined.

Bud and his wife, Flossie, lived in comfortable quarters built on to the back of the store. Nettie Buckley, Flossie's close friend and housekeeper, lived in one small house on the Rice property and an eightyyear-old retired school teacher, Blanche Brown, who worked parttime in the store, lived in another. Customers and visitors would find the three women together in the store or in Flossie‘s kitchen at almost any time of the day or night. Local folks who didn‘t like Bud still stopped by for coffee with Flossie, Nettie and Miss Brown.

Miles blew a blast on the air horn as he passed between the new yellow brick Mormon Church to his right and the rickety old whitewashed adobe Baptist Mission School to the left. He liked to let Flossie and Miss Brown know he was coming. It gave them half a minute to shoo passengers—usually Indians going to Grants—out of the store and into the chill of the autumn night.

A pickup truck pulled onto the roadway from the trading post parking lot and headed east toward Albuquerque, fifty-five miles away. Cody Miles later remembered the truck as scrap-iron mounted on wheels. A '46 or '47 Ford, he guessed, dark blue or black except the right door and right front fender were light colored. It didn't have a license plate that he could see, and a single tail light glowed dim gray, the red lens long since broken out and gone. Indian Cadillac, the bus driver said to himself.
Old
Indian Cadillac.

The bus didn't stop in Budville that night. Dark inside and out, except for the two gas pump globes that provided meager yellow illumination, the store appeared closed for business and no one stood under the sign which read
Bus Depot
. Miles thought it odd. Rice usually stayed open until eight o'clock or later, even when traffic volume declined in the fall and winter months.

It pleased Cody Miles to think some of the ill-mannered arrogance had been taken out of Bud Rice when the merchant lost his final court battle to keep Interstate Highway 40 from bypassing Budville. The new four-lane highway was complete and open to traffic from Albuquerque to Gallup except for ten miles of the old two-lane Route 66 from Laguna Pueblo to the Los Cerritos Trading Post; the stretch that passed through Budville. By use of frivolous lawsuits and political chicanery Bud Rice had stalled completion of the Interstate road for seven years, but in the early fall of 1967, construction crews began work on the final section of I-40 where it climbed the side of Flower Mesa a half mile south of Budville.

Miles didn't like Bud Rice. Few people did. Rice worked at being as dog-mean and nasty as the pit bull terriers he kept in the salvage yard behind his store, and he didn't care whether Cody Miles liked him or not. He didn't care whether anyone liked him or not, and he in turn, didn't have regard for many people. Apart from police officers and sheriff's deputies, Bud counted few men as friends.

The bus cruised slowly through the tiny town. Miles later recalled seeing two cars in front of Dixie‘s Place—a rundown old tourist trap and saloon diagonally across the road from the Bud‘s Trading Post— and the dirt parking lot outside the King Cafe & Bar at the west town limit was empty. The bus accelerated as it left Budville and soon rolled along the Old Road at seventy-five miles per hour, passing through Villa de Cubero and Los Cerritos. At the bottom of a sharp little hill just east of the Chief Rancho Motel, the driver saw red lights flashing on the road ahead. He slowed to fifty-five before passing a State Police car and a Corvette with Texas plates pulled off on the road‘s shoulder. A uniformed officer leaned on the open driver's door of the black and white Plymouth police cruiser and two other officers stood illuminated in the car's headlights. No one‘s safe from the cops, Miles muttered to himself.

The Lone Alpha Unleashed: A Big Girl Meets Bad Wolf Romance by Molly Prince
Weird Tales volume 38 number 03 Canadian by McIlwraith, Dorothy
In Praise of Messy Lives by Katie Roiphe
Doctor Who BBCN10 - The Nightmare of Black Island by Doctor Who
The Shameless Life of Ruiz Acosta by Susan Stephens
Man of the Match by Dan Freedman
A New Lease of Death by Ruth Rendell
Walk the Sky by Swartwood, Robert, Silva, David B.
Etched by Dean, Eliza
Above His Station by Darren Craske
Our partner