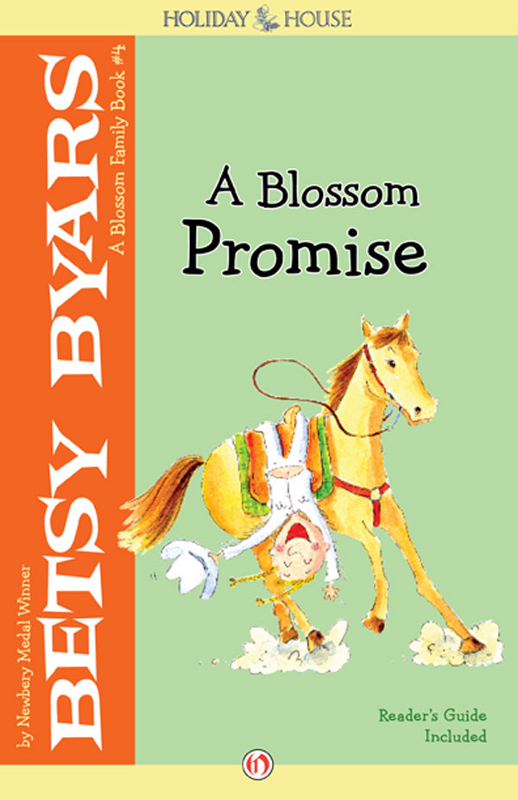 4. The Thing Under the Porch

5. Up the Creek Without a Paddle

10. The Trouble with the Voyage

12. The Man on the Brindle Bull

15. The Rope Trick of the Year

22. In the Shadows with Mud

Chatting It Up: A Holiday House Reader’s Guide

A Biography of Betsy Byars

Junior was packing a paper bag. He wished he had a suitcase to pack, but he didn’t and so he was putting just as much care into packing his paper bag. Junior was going to spend the night with Mad Mary.

In the bottom of the bag, neatly folded, was a pair of his mom’s pajamas. Junior had to roll the pants legs up to keep from tripping over them, but it was the only nice pair of pajamas in the Blossom family.

On top of the pajamas was a Big Ben pad of paper and a pencil, in case he needed to do some writing. On top of that was his toothbrush, the family toothpaste, Maggie’s comb, and a small broken mirror. On top of that was an extra pair of socks, his inch-long harmonica and two Snickers bars, one for him and one for Mary. Junior could tell which was which because he had already taken a bite out of his.

Junior stared at the contents for a moment and then, satisfied, he folded the top of the bag down neatly.

Junior had been looking forward to spending the night in Mad Mary’s cave ever since the day he got to know her. Her cave was the most wonderful place Junior had ever been. It seemed to him like a museum display of cave life—full of strange plants, strange books, strange furniture, strange foods.

The best thing about the cave, to Junior, were the vultures that roosted above it. There was something about watching the huge birds making effortless circles in the morning sky that gave Junior a splendid, lighter-than-air feeling. It was such a special feeling that Junior wanted to know the name of it. He was looking forward to the day that particular feeling appeared in one of his spelling lists at school. He knew exactly how he would use the word in a sentence.

Mad Mary had come personally to the Blossom farm to invite Junior. She had stood with one worn boot propped on the steps—she hadn’t entered a house in seven years—and she yelled, “Junior!”

No one in the world sounded like Mad Mary. As the sound of her voice boomed through the house, Junior burst through the screen door.

“Junior,” she said when he had calmed down, “I thought you were coming to spend the night.”

“I don’t know!” He turned to his grandfather in the doorway. “When, Pap? Saturday? Can I go this Saturday?”

“I’ll be watching for you,” Mary said. With a brisk nod, she had turned and disappeared into the woods.

But Saturday it had been raining, and it was still raining the next Saturday. The Catawba River crested on Sunday, and still it kept raining. Now Alderson County had had fourteen straight days of rain—a state record—and the whole county was flooded.

Every night “News at Eleven” showed pictures of residents riding down the county streets in boats instead of cars. Even Brian Williams, at 6:30, had called it the worst flood in the state’s history.

Junior had begged to go that second Saturday despite the rain. “Why not?” he whined. “I was in her cave before when it rained.”

“I can take an umbrella.”

“If you don’t want to take me, I’ll go by myself. I know the way. I could get there blindfolded.”

“Maybe you could, Junior, but when the valley gets underwater, there’s lots of things you don’t see. You step in what you think’s a little puddle and it turns out to be a ten-foot hole. When the flood’s over—”

Now at last the rain had stopped. The sun was out. The mist that hung over the flooded fields had burned off. People were out without umbrellas. The forecast was sunny and mild.

Normally Junior would be outside in the sunshine doing what everyone else in the county was doing—enjoying the flood. However, he had been wanting to go to Mary’s for so long he couldn’t get his mind on anything else.

He went through the living room and onto the front porch. “Paaaaap!” he called. Pap had promised to walk him to Mad Mary’s right after lunch.

He could see that Pap’s truck was still down by the creek, rammed sideways against an oak tree. At one point in the flooding, Pap had tried to drive the truck down the hill. The truck had slithered down the muddy slope like a sidewinder. If it hadn’t rammed into the oak tree, it would have washed downstream.

Junior knew Pap had probably walked up the creek to admire the flooding. “But it’s just water,” Junior said to himself. “Why does it take so long to look at water?”

He sat on the steps and slumped dejectedly over his paper bag. “How can a plain old flood make him forget I was going to Mary’s? Tell me that. How?” he asked the empty yard.

Junior felt water seep from the wet steps through his jeans, chilling his skin. He didn’t care. He just wanted Pap to come home. He wanted to go!

He looked at his watch. It said, as it always did, 3:05. Junior thought it could be even later than that.

If Pap didn’t get back soon, he wouldn’t get to Mary’s in time for supper. Mary would think he wasn’t coming. She would eat without him. All the varmint stew would be gone.

“Come on,” Junior said. He gritted his teeth with impatience. “Come onnnnnn.”

He rocked his feet back and forth on the step. Pap had once told him that every member of the Blossom family had restless feet. That was why they had joined the rodeo circuit in the first place. Junior knew now what Pap meant.

He scratched an old flea bite on his ankle. The minutes dragged by.

Junior sighed. Slowly he unfolded his paper bag and looked inside. To pass the time, he decided he would take one more bite of his Snickers bar. Carefully, as if he were peeling a banana, he folded back the paper.

As the smell of chocolate filled the air, Junior heard a noise under the porch. “Don’t bother coming out, Dump,” Junior told the dog. “I’m not sharing.”

Dump came out into the strong sunlight blinking. His face was covered with spider webs and dirt.

“Don’t give me pitiful looks,” Junior said. Carefully he took one bite.

Junior broke off a piece and gave it to Dump. Then he folded the paper around the rest and put it in the bag.

“Now that is it. Go back and chase frogs.”

The flooding of the valley had brought a lot of frogs up to dry land. Some of them had taken refuge under the Blossoms’ house. Junior could hear them croaking at night, their chorus louder at times than the roar of the creek.

As soon as Dump had discovered the frogs, he started spending a good part of his day jumping around the crawl space, pouncing on them. When he caught one in his mouth, he didn’t know what to do with it and they always left a bitter taste. Still, he couldn’t stop pouncing.

Junior leaned down and scratched Dump behind the ears. “I’m going to spend the night with Mary if Pap ever comes back.”

Dump’s eyes closed with pleasure as Junior’s fingers scratched the spot that always itched. His tongue licked the air.

“If Pap doesn’t hurry and come back soon,” he added, “I might just go without him.”

A mile away, up Snake Creek, Vern Blossom and his friend Michael were making a raft. Vern was whistling between his teeth. He always did this when he was happy. He had picked the habit up from Pap.

For the first time in his life, Vern had something to be proud of. It was always Junior who made things in the Blossom family and Vern who stood by and watched. Vern felt he had spent half of his life being an audience for Junior. Now, at last, he was making something. Junior would be the one to be astonished.

For one week, ever since the Catawba River crested and Snake Creek reached flood stage, Vern and Michael had been planning the raft. For one week they had collected logs and wood in the forest and scraps of rope and nails from their homes. They had stitched a sail in Michael’s basement from a fitted bed sheet.

“Now don’t tell anybody, all right?” Michael had said again and again. “They’ll want to get in on it.”

Vern always nodded instantly. He had no intention of sharing his moment of greatness, his triumph, with anyone but his best friend.

“The raft will hold two people—max,” Michael always went on. Michael couldn’t work without talking. “Three people and it’s …” He broke off at this point to hold his nose and pretend to sink under water. Then he added the real reason for silence, “Besides, if my mom found out …”

Vern had passed the week in a blaze of excitement. In school, he drew rafts in the margins of his papers, spending far more time on the nautical details than on his work. In the late afternoons, when Michael’s mother called Michael into the house, Vern kept trudging tirelessly through the dripping forest, searching for raft material. At night, in his bed, unable to sleep from excitement, he closed his eyes and made the trip downstream in his mind.

The plan was simple. On the first Saturday after the rain, they would spend the morning assembling the raft. After lunch at approximately noon—“twelve bells,” Michael called it—they would set out. The voyage would take them from Michael’s house to Vern’s, a nautical distance, they figured, of one mile.

Michael was not going to tell his family about the trip at all. Vern was going to tell Pap and Junior only that if they watched the creek carefully that afternoon, they would get the surprise of their lives.

As he and Michael sailed triumphantly down the creek on their raft, they would wave and shout at any neighbors who happened to be outside. Since the whole county was watching the creek, there was a good chance they would be seen and appreciated by a lot of people.

It was one of those events, Vern thought, that would go down in county history. It would be talked about for years. “It was the year of the flood,” storytellers would say in decades to come, “and the oldest Blossom boy—Vern—made a fine raft.”

Lies My Girlfriend Told Me by Julie Anne Peters
The Fountainhead by Ayn Rand
Blazed by Jason Myers
Betrayals in Spring by Leigh, Trisha
Cat Among the Herrings by L C Tyler
The Making of The Huntress by Sherry David
Father Christmas by Judith Arnold
The navigator by Eoin McNamee
God's War by Kameron Hurley
Madrigal by J. Robert Janes
Our partner