Blue Moon (Book One in The Blue Crystal Trilogy) 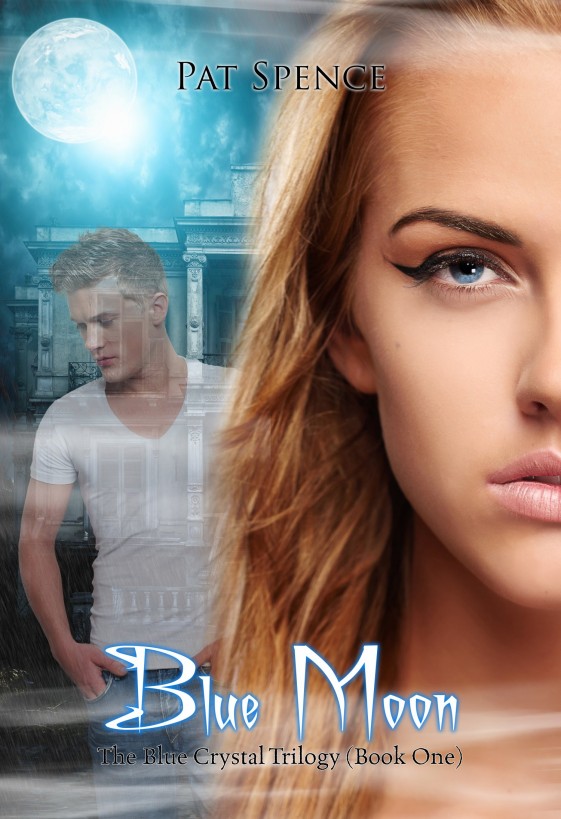 (The Blue Crystal Trilogy)
Book One

Pat
Spence
is a freelance writer and
previously a magazine editor. She has also worked as a copywriter
in advertising agencies, a freelance trainer in personal
development and jobsearch skills, and a massage
therapist/aromatherapist. She is married with one child, has a
degree in English Literature, reads Tarot and is learning
banjo.

Follow The
Blue Crystal Trilogy at
https://www.facebook.com/bluecrystaltrilogy
and see the Blue Moon trailer at:
https://www.youtube.com/watch?v=SFvsXlPem4Q

Other titles
by Pat Spence:

Into The
Blue
(Book 3) coming soon

This book is a work of fiction.
The names, characters, places, and incidents are products of the
writer’s imagination or have been used fictitiously and are not to
be construed as real. Any resemblance to persons, living or dead,
actual events, locales or organisations is entirely
coincidental.

This eBook is licensed for your
personal enjoyment only. This eBook may not be re-sold or given
away to other people. If you would like to share this book with
another person, please purchase an additional copy for each
recipient. If you’re reading this book and did not purchase it, or
it was not purchased for your use only, then please purchase your
own copy. Thank you for respecting the hard work of this
author.

For Steve and Amelia.

‘
All other things, to their
destruction draw,

Only our love hath no
decay…’

Love, all alike, no season
knows, nor clyme,

Nor houres, dayes, moneths,
which are the rags of time.

8. A Change of
Heart

12. Danger in the
Gardens

Monday 25
th
March was an ordinary day, no different to any
other. But when I look back, I see now that this was the day things
began to change.

I can also see that I couldn’t
and wouldn’t have changed a thing. It was as if everything that
happened was somehow pre-ordained, and I was simply playing my part
in a story that was meant to be, that had started many thousands of
years ago….

The estate agent glanced
impatiently at her watch, and looked out of the window for the
fifth time that minute. ‘Time-wasters,’ she muttered to herself
pursing her lips with irritation, ‘they probably won’t show. Just
like that lot the day before. And if they do, there’s no way
they’ll want to buy this old heap’. A look of distaste passed
across her carefully made-up face as she glanced around the room.
The once ornate fireplace had long since lost its earlier splendour
and was now dimpled and chipped. A large chandelier hung from the
central ceiling rose, cracked and mottled, and pieces of the
delicately decorated ceiling scattered the floor like old confetti,
yellowed with age. Everywhere, the stench of damp and decay hung
heavy, the windows too rotten to open and let in fresh air.

Outside, the grounds fell away
into the distance, a mass of tangled vegetation and thick
undergrowth. The once formal gardens were now desolate and unkempt,
the flowerbeds ravaged by age and neglect, and the pathways choked
by an advancing army of weeds and lichen. Above it all the Cedars
of Lebanon towered, majestic and tall, looking sadly over the
mayhem below.

The estate agent moved her
manicured forefinger down the filthy glass, trying to see out a
little better and get a glimpse of her missing clients.

Without warning, a loud bell
sounded in the hallway, making her jump.

“What the…?” she muttered. “How
did they get to the front door? I never saw them coming.”

Baffled, she rushed out of the
ballroom and into the vast hall. The huge brass bell echoed again
in the cavernous walls.

“Alright, alright,” she called,
hurrying to open the huge, metal studded oak door, stiff with
disuse. The door creaked open, its hinges rusty and unyielding, and
the estate agent peered out, her eyes struggling to take in the
brightness of the sunshine after the gloominess within. A man and a
woman stood on the doorstep.

“That’s us. So sorry we’re
late,” said the blond woman before her, with a voice as soft as
butter candy. “I hope we haven’t kept you.”

“No, not at all,” said the
estate agent, her eyes wide open in disbelief, taking in the sleek
black car that stood outside and the swarthy chauffeur who lounged
nonchalantly against the passenger door. “I didn’t see you arrive,
that’s all.”

“Can we come in?” said Mr de
Lucis, with a smile, revealing perfect white teeth.

“O… of course,” said the estate
agent, stepping back, and allowing the couple to enter. She swung
the heavy oak door back into place, feeling so unsettled she quite
failed to register that it swung easily and noiselessly back into
place, without a hint of rust or creakiness.

She turned to look at the
couple, noticing how they seemed to light up the dark entrance
hall. Tall, elegant and well dressed, each wore a pair of large
sunglasses, giving them an air of mystery and more than a touch of
Hollywood glamour. Mrs de Lucis wore a pale pink pencil skirt with
matching jacket, showing off her slender figure to perfection. A
string of pearls nestled at her neckline, and her blond hair was
pinned back in a chignon, giving emphasis to her high cheekbones,
small straight nose and pale pink lips. To say she was beautiful
was plainly an understatement.

Like his wife, Mr de Lucis was
impossibly good looking. His face was strong and chiselled, framed
by tousled, blond hair, and there was no denying the athletic build
beneath his expensive pale blue suit. To the estate agent, he was
the closest thing to a Greek god she had ever encountered. They
were probably in their early thirties, she guessed, staring
enviously at their flawless pale skin. It was as smooth and white
as alabaster. Simultaneously, they removed their sunglasses,
revealing the most electric blue eyes she had ever seen.

She stared, fascinated, and for
a moment struggled to find a word to describe them. Striking? That
didn’t do them justice. Stylish? They were more than that. Then she
had it. Radiant! That was it. They were like two exquisite jewels,
shining brightly.

“Are you alright?” enquired Mr
de Lucis, in a caramel smooth voice that took her breath away.

“Yes, I’m fine,” she said,
gazing into his deep blue eyes and feeling a strange fluttering in
her stomach. “I’m sorry, I didn’t hear your car. I was a little
surprised to see you, that’s all.”

“It has a very quiet engine,”
said Mrs de Lucis, in her smooth, silky voice. “One doesn’t always
hear it. Now, perhaps you could tell us about the house.”

She led the way into the
ballroom, talking animatedly. “Hartswell Hall is a wonderful
example of Victorian architecture. It was built by a wealthy
merchant in 1851 for his wife, who sadly died before she could move
in. It had many uses over the years, but was most recently owned by
a recluse, who shut himself away from the world. It went on the
market nearly two years ago, when he died. As you can see, it is in
need of a little re-decoration.” She laughed affectedly.

“More than a little,” said Mr
de Lucis, prodding one of the rotting window frames and revealing
the black decay beneath.

“But nothing we can’t handle,”
said his wife, running her fingers down the chipped stone
fireplace, then removing a cobweb that hung from the chandelier,
“Have you had many viewings?”

The estate agent stared. Was it
her imagination, or did the chandelier suddenly look brighter, as
if life had suddenly been breathed back into it? And didn’t the
carvings on the fireplace look somehow a little more defined? She
shook her head and focused on the question.

“Viewings? Oh, yes,” she said,
seizing the opportunity. “There are plenty of people interested in
this property. I wouldn’t be surprised if it went to sealed bids.
It has great potential.”

“It certainly does,” said Mrs
de Lucis, her voice barely discernible. “I think it will suit our
purposes admirably.” She glanced at her husband. “We’d like to make
an offer.”

“You would?” asked the estate
agent, in surprise. “Don’t you want to look around?”

It was enough for the estate
agent. Scenting a deal in the making, she drew out a clipboard from
her large shiny handbag and snapped into pecuniary mode.

Right,” she said, “as you know,
it’s on the market for £1.5 million, but we do have other
interested parties.”

“For total exclusivity,” added
her husband. “No other viewings, no other offers considered. Do we
have a deal?”

The estate agent could hardly
believe her luck.

“£2 million? We most certainly
do. I’ll need to run it by the Executors, of course, but I don’t
anticipate a problem. Consider Hartswell Hall yours.
Congratulations!”

She went to shake Mr de Lucis’s
smooth white hand, starting slightly as an electrical charge seemed
to pass from his hand to hers. As she looked into his eyes, she
noticed small flecks of grey that glinted like granite amidst the
electric blue.

Outside, the rust-bound hands
of the three golden clocks that adorned the old Clock Tower began
to move slowly and inexorably around their tarnished faces.

I wiggled my toes to the bottom
of the bed, feeling cosy and warm. I tried to open my eyes, but the
effort was just too much and I lay back on the pillow, luxuriating
in its downy softness and trying desperately to get back into my
dream. Somewhere in the distance I could hear my name being called,
but the pull of sleep was just too great. I couldn’t respond.

“Emily,” the voice sounded,
getting louder. “Wake up.”

The Empty Hours by Ed McBain
Countess Dracula by Guy Adams
Scene of the Crime by Anne Wingate
The Funhouse by Dean Koontz
Life With HIM: Rennillia Series Prequel (Companion Novelette) by M. Sembera
The Lost Stars 01-Tarnished Knight by Jack Campbell
The Cloister Walk by Kathleen Norris
The Billionaire Banker by le Carre, Georgia
Bound to the Bounty Hunter by Hayson Manning
The Blue Sweater: Bridging the Gap Between Rich and Poor in an Interconnected World by Jacqueline Novogratz
Our partner