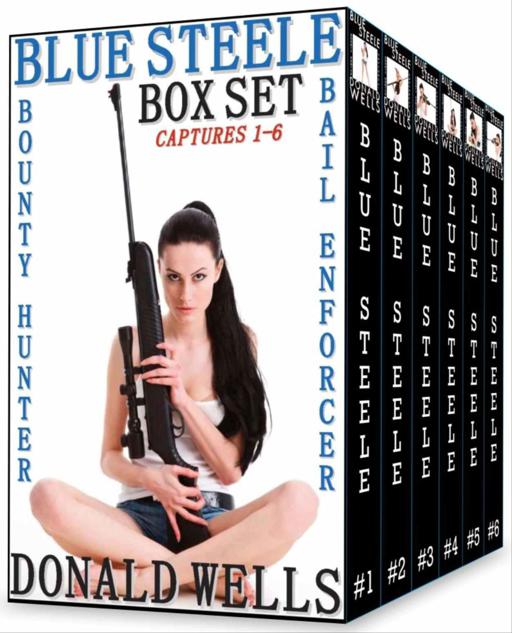 The Many And The One

Of Tongue And Pen

Everything New Is Old Again

The Light Of Darkness

The TAKEN! Series of Short Stories

Whisper In The Pines

About The Author | Donald Wells is the author of numerous short stories and novels, including The TAKEN! Series, The Caliber Detective Agency, Blue Steele, Monsters & The Reynolds Family Saga. | He lives deep inside a writing cave in the wilds of New Jersey. | However, the cave does have Internet access, and so, you can contact him at:

Also, be sure to check out:

If you’d like to be kept aware of new releases, please send an email to: | [email protected] | Your information will never be sold and it will only be used to inform you of new books. | Thank you!

Please leave a review. It will be much appreciated, | Thank you,

I
t was a Friday night and I was on yet another blind date. At least this one was cute.

He had blue/green eyes and curly blond hair and smelled great. His name was William Grant and he was an architect, 32, divorced, no children. William, Billy as he liked to be called, was clean-shaven, articulate and well read.

We were in Fort Worth, Texas, at a restaurant called
The Round-up
. The décor was western and the dress code casual. I was wearing my best boots along with a blue dress that hung three inches above my knees and displayed a tasteful bit of cleavage, well, all right, it was an ample bit of cleavage, but hey, they’re one of my best features and I never met a man who disliked looking at them.

I was having a good time, and that’s when Mickey Kyle walked into the restaurant. Mickey was a life-long thug who skipped bail three weeks ago and now had a four thousand dollar bounty on his head.

Mickey walked up to the bar and spoke to the bartender for a moment, and then she reached under the counter and brought out a large paper bag. Take-out, Mickey was picking up a take-out order.

“Do you remember I told you that I was a bounty hunter?”

He smiled, did I mention that he had a great smile, well he did.

“Of course I remember, why?”

“Because I have to go to work now, see that man at the bar, the one with the white bag in his hand? His name is Mickey Kyle and he’s worth four thousand dollars to whoever brings him in.”

Billy turned his head and stared at Mickey. Mickey Kyle was forty-four, six-foot-three and weighed nearly three hundred pounds. At the time, he was wearing a sleeveless T-shirt that displayed his many and varied tattoos. He was also bearded and his broad nose hooked a little to the right, while his beady eyes had a mean slant to them.

Billy turned back to me with a look of puzzlement.

“You’re calling the cops, right? I mean you’re not going to try and arrest him yourself, are you?”

“Mickey’s all mine; I’ve been looking for him for weeks.”

I opened my purse and grabbed a pen just as Mickey left the bar. I then hastily scribbled my number on Billy’s palm.

Billy nodded as he stared at his hand, and I rushed out of the restaurant while searching my purse for my car keys. When I reached the parking lot, luck was with me. Mickey was standing outside the restaurant talking to a redheaded woman with too much make-up and shoes I wouldn’t be caught dead in. I mean, who wears open-back shoes?

They were standing by a motorcycle that I assumed was Mickey’s, but a few moments later, the redhead straddled the bike and rode off. With a gun in my right hand and cuffs in my left, I walked over by Mickey and smiled.

Mickey looked at the gun and then the handcuffs and then at me. He didn’t begin laughing until he looked at me.

“Are you kidding me? You think your skinny little girl ass is gonna take me in? The damn cops must be getting desperate if they hiring chippies now.”

He made no move to catch the cuffs and they hit him on the chest and fell to the ground, along with the bag of food. A second later, he was charging me. I stood my ground, took careful aim and pulled the trigger.

I carry a thirty-eight with a two-inch barrel, my gun has a short barrel because it makes it easier to carry, and I rarely need it for distance; if I did, it would be next to useless.

Mickey was three feet away when I shot him in the left knee and he fell at my side, moaning.

The sound of the shot brought the restaurant crowd outside and I spotted Billy standing near the front, his eyes were wide and he looked frightened. A moment later, a man pushed past him and headed over to me. He was holding a badge in one hand and a gun in the other. His name was Deke Thomas, and he was a Texas Ranger. Deke was John Wayne tough and tall, and even looked a little like the ol’ Duke. Deke had been a friend of my father’s and I went to school with his oldest daughter, Jenna.

Deke looked down at Mickey and then over at me.

“Hey Blue, is that Mickey Kyle?”

“He’s worth what, three grand?”

While we talked, Mickey moaned, and I do believe I saw tears in his manly eyes.

“He called me a chippie and charged at me.”

“Well, judging by the look of that knee, I’d say his charging days are over.”

A police cruiser arrived and Deke went over to talk to them. I looked back at the crowd, searching for Billy, and saw him nowhere in sight.

When all the dust settled, I arrived back home at two twenty-three in the morning and fell into bed with a splitting headache.

Maybe I should have shot him in the knee too.

B
ecca and I were out for a run in Trinity Park.

She was my best friend and had been such, for as long as I can remember. Her family and mine were neighbors and we were born only two days apart. Becca is a natural blonde with brown eyes, who these days wears her hair short. She says that with five kids under the age of ten, she has no time for worrying about her hair.

My hair is dark and my eyes green. I wear my hair long, always have, and even if I had five kids I would still do so. I am very vain about my hair.

We were both wearing shorts with tank tops and we were both sweating from head to toe. It was a miserably humid day in Fort Worth and the temperature, at eleven a.m., was already in the eighties. We came to a stop near the Mark Twain statue and caught our breath.

“Are you working today?” Becca said.

“Yeah, a man by the name of Vincent Kane jumped bail yesterday; he’s an accountant, the bounty is ten grand.”

“He murdered his wife.”

Becca made a face.

“Must you always go after the dangerous ones? Doesn’t anybody ever skipped bail for not paying their parking tickets?”

I smiled. Becca worried about me more than my mother did.

“I’ll be careful, and I’ll be ten thousand dollars richer when I find him.”

“You’re really determined to buy a ranch someday, aren’t you?”

“Not someday, by the time I’m forty, and after I nab Vincent Kane I’ll be a year ahead of schedule.”

“Yeah,” I said, and smiled. A few months ago in Vermont, I was tracking a fugitive named Sebastian Rojo. I didn’t get Rojo due to... unusual circumstances, but I did get the hundred grand in uncut diamonds he was carrying.

Becca walked over and stared at me.

“Do you still think about him?”

I nodded. “Yeah, I still think about him. You would too if you had met him. But, hell, he’s married; I mean he’s
really
married.”

In Vermont I met a man named... well, his name doesn’t matter, but he was unlike anyone I had ever known. Sebastian Rojo had taken his wife as a hostage to make his escape and he and I teamed up to rescue his wife and capture Rojo. We got his wife back and I wound up with Rojo’s diamonds.

Becca reached out and gave my hand a squeeze.

“Like you did? You and Richie have been together since the eighth grade. Do you know how lucky you are?”

Becca grinned shyly, “Yeah, I do.”

I
spent the next few days talking to anyone who knew anything about Vincent Kane, his neighbors, relatives, clients, and I learned two things. One: Most of the people in his life didn’t believe that he killed his wife, and two: Most of them didn’t like his wife.

Lucinda Kane, Vincent’s dead wife, was described as being selfish. She had been fifteen years younger than her husband, and many thought that the age difference had been part of the problem. I was told that she cheated on her husband, gambled them into bankruptcy and refused to get a job to help dig them out of it. In fact, Lucinda Kane seemed so universally disliked that I sought out the one person who should have something positive to say about her, her mother.

Bobbi Reed, Lucinda’s mother, lived in Dallas with Lucinda’s little sister, Rachel. The house turned out to be a double-wide trailer in a mobile home park off of interstate 30.

No one was home when I got there, and so I sat on the steps and waited. Sitting in the weeds near the trailer, was an old Volkswagen Beetle that looked like little more than a pile of rust. There were weeds surrounding it, but I noticed that the weeds in front, by the trunk, looked trampled, as if someone had been standing there recently. The trailer too was sunbaked and had paint chipping off.

Hard Case Crime: House Dick by Hunt, E. Howard
Alcestis by Katharine Beutner
After the Before by Gomez, Jessica
Gods and Fathers by Lepore, James
Stop at Nothing by Kate SeRine
The Journal: Crimson Skies: (The Journal Book 3) by Moore, Deborah D.
Tales for a Stormy Night by Dorothy Salisbury Davis
Emil and the Detectives by Maurice Sendak Sendak, Maurice
Entice (Hearts of Stone #2) by Veronica Larsen
Your Eyes in Stars by M. E. Kerr
Our partner