Revell's foot caught a projecting piece of angle iron and he stumbled. He felt himself being grabbed by Andrea and managed to stay on his feet.

Waves of roasting heat against their backs kept them going when their bodies had no reserves left. The chemical plant was blasting itself apart, tearing its own heart out in an increasingly violent sequence of explosions.

Ahead was the perimeter road and the fence. Revell could see Dooley and Ripper struggling to pull a limp form through the rent in the wire.

A colossal blast wave smashed everyone down. Looking back, Revell saw a huge ball of crimson flame soaring to a tremendous height. At its base the great steel tanks and towers were buckling and collapsing in the heat. The torn metal of broken pipes was dripping gobs of molten steel, as fierce blowtorches of flame spouted from them.

“Leave him, he's dead.” Revell flinched as red-hot bolts and plates rained down close by. “Save yourselves.”

The dying Russian had been unable to withstand the attempts to manhandle him through the fence. They abandoned his body draped halfway through the opening. A moment after they left it, a huge chunk of flaming debris crushed his remains and twenty meters offence, enveloping the area in a furnace of searing fire.

Wave after wave of gigantic explosions ripped through the complex. Huge storage tanks were blasted skywards as their contents ignited. They would rise several hundred feet, and then their thousand-ton fabric would turn on its side and fall back. The impact of the landing would send a shock through the ground that made it bounce and ripple, but the thunderous report that accompanied it was lost among the non-stop roar of fresh explosions.

From end to end, the chemical plant became a single monstrous blazing scene of destruction. Single blasts or eruptions no longer showed amongst the holocaust, a curtain of fire engulfed the site.

The autobahn was lined with the people who had returned to their vehicles. They watched the spectacle, forgetting their recent fear and the reason for their panicking flight.

Under their feet lay the corpse of the old man. It was totally ignored, except when it was cursed by someone tripping over it, or when they were forced to step across it to get to a better vantage point.

Andrea, Revell, and the rest of section were also watching, as they sat exhausted, still recovering from the race for their lives. They looked up as a pair of Blackhawk helicopters circled low, then came in for a fast landing nearby.

Squads of heavily armed men were jumping from each before the wheels touched, immediately forming a protective perimeter until the choppers lifted again.

A figure strode confidently and purposefully towards the resting group. Revell recognized the SAS colonel. He was flanked by two heavily armed troopers. “Did you account for them all?” Revell didn't bother to stand. “Most of them.” “What the hell do you mean by that? What's the body count?”

Sighing, Revell pushed himself to his feet. He felt old and tired. “Between our own efforts and theirs, we accounted for nine of them altogether. All confirmed. The bodies are back in there.” He indicated the kilometre-long pyre. Even at that distance the heat could still be felt. “The others got away? You missed them?” With the palm of his hands, the colonel was impatiently slapping the twin holsters he sported.

“No, we got them, then they must have made a break for it when the plant went up. It was every man for himself in there. Maybe they struck out the wrong way. Who knows?”

“What sort of body count is that? First you let them go, then you don't know which way they went, now you aren't even sure if they made it or not!”

“Colonel, I don't give a fuck about your body count.” The trooper-bodyguards stepped forward aggressively, and found themselves instantly confronting Revell's men. Weapons were levelled, Andrea gripping the pin of a grenade.

“Bloody private armies.” The colonel waved forward the rest of his men. “Even got a bloody woman. Still, I expect she comes in useful.”

The colonel had been looking at Andrea. He certainly never saw Revell's fist. Connecting with the side of his face, the blow rocked him, but he stayed on his feet.

“That you'll regret.”
“I wouldn't be too hasty, Colonel.” Revell indicated the road. Above the roofs of the cars, on the south-bound carriageway, were visible the newly arrived transport of the remainder of the Special Combat Company.

Debussing, the men swarmed through the traffic to make the odds more than even.

Forcing himself to stay calm and remain outwardly under control, the colonel seethed inside. He sensed the dangerous mood of his men, after the insult of the blow.

“So what do you intend doing now, with this ragbag outfit of freaks and misfits?”

“We're neither of those things, Colonel.” Revell knew without looking that his virtually unarmed company was backing him up.

“Since the Zone took shape, we've been in there getting results, doing ten times more damage than your pinprick raids.”

“That's it, Major.” Dooley cheered. “Give it to the cunt, good and strong.” “Then why don't you get back in there?”

The colonel would have liked to launch his men against this rabble, but was acutely aware of the thousand strong civilian audience on the autobahn, now joined by a large number of West German police.

“That's just where we're going.” Revell ripped off his NATO insignia. “This time though we'll be fighting for ourselves.”

“Going freelance, are you?” The colonel sneered. “That's about all you're fit for, but you'll never make it. I’ll see to that.”

Revell took the grenade from Andrea, and pulled out the pin. “You're going to help us make it. Unless you reckon you can outrun a grenade, have your men hand over their weapons and ammunition.”

It was a long moment before the colonel spoke. When he ordered his men to comply, it was with a hoarse, emotion-choked voice. He had to repeat himself several times before all of them reluctantly obeyed.

“We'll be on our way then. Thanks for the equipment.” Revell tossed the grenade into a culvert, where it exploded harmlessly, but started a short-lived panic among the civilian watchers.

“You'll never get there.”
“Yes, we will, Colonel. No one is going to stop us. We've a war to fight, and we've only just started.” 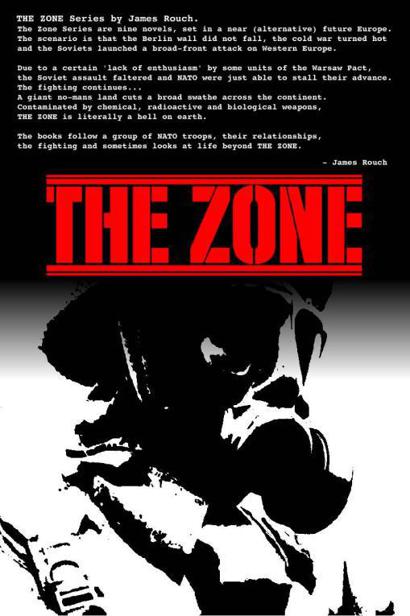 Taming Wilde by Rachel Van Dyken
Death of an Orchid Lover by Nathan Walpow
I, the Divine by Rabih Alameddine
The Mystery at the Calgary Stampede by Gertrude Chandler Warner
The Curse of the Labrador Duck by Glen Chilton
Book of One 04: A Child of Fire by Baker, Jordan
Secret Confessions: Down & Dusty – Brooke by Eden Summers
There Will Be Wolves by Karleen Bradford
Chez Cordelia by Kitty Burns Florey
Positive by David Wellington
Our partner