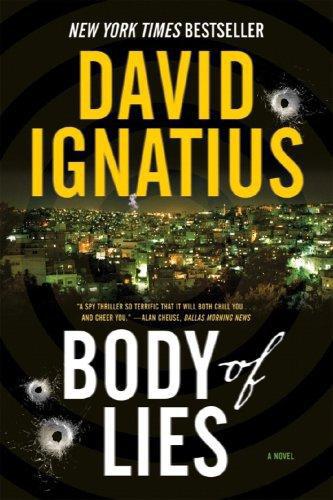 The Bank of Fear

THE WAR DESCRIBED IN
these pages is all too real, but this book is a work of fiction. The characters, events and institutions are imaginary. I have given my Jordanian intelligence service the same name as the real one, and a bit of its panache, but the rest is invented. I am greatly indebted to friends from many countries, who share my fascination and despair about the Middle East and who, over many years, have tried to point me toward the truth. These brave people, who risk their lives to try to make things better in that part of the world, are the secret heroes of this book.

I owe special thanks to several people: to my friend of forty years, Jonathan Schiller, who generously offered me a desk at his law firm, Boies Schiller & Flexner, where I could hide out and chip away at this book over many months; to Eve Ignatius and Garrett Epps, who read early drafts of the manuscript; to my peerless literary agents, Raphael Sagayln, Bridget Wagner and Eben Gilfenbaum, who kept encouraging and pushing; to Bob Bookman at Creative Artists Agency, who offered wise advice about the book and characters; to my editor at Norton, Starling Lawrence, who teaches a master class in writing with his acidulous marginal notations; and finally to my friend and boss at the
Washington Post
, Donald Graham.

"To mystify and mislead the enemy has always been one of the cardinal principles of war. Consequently,
ruses de guerre
of one kind or another have played a part in almost every campaign ever since the episode of the Trojan horse, or perhaps even earlier. The game has been played for so long that it is not easy to think out new methods of disguising one's strengths or one's intentions. Moreover, meticulous care must be exercised in the planning and execution of the schemes. Otherwise, far from deceiving the enemy, they merely give the show away."

It took nearly a month to find the right body. Roger Ferris had very particular requirements: He wanted a man in his thirties, physically fit, preferably blond but certainly and recognizably Caucasian. He should have no obvious signs of disease or physical trauma. And no bullet wounds, either. That would make it too complicated later.

Ferris was on assignment in the Middle East most of the time, so it fell to his boss, Ed Hoffman, to manage the details. Hoffman didn't trust his colleagues to locate a body without thinking they had to notify a congressional committee or otherwise botching the job. But you could find someone in the military who was willing to do almost anything these days, so Hoffman contacted an ambitious colonel on the J-2 staff at Special Operations Command at MacDill Air Force Base in Florida who had been helpful on other matters. He explained that he needed a favor, and an odd one at that. He required a white male, approximately six feet tall, early middle age, muscular enough to be believable as a case officer, but not so muscle-bound that he looked like a trigger-puller. The ideal candidate would be uncircumcised. And he had to be dead.

The colonel found a body three weeks later in a morgue in south Florida. He had tapped a network of retired officers who were
working private security and claimed they could get anything done. The dead man had drowned the previous day while windsurfing off the Gulf Coast near Naples. He was a lawyer on vacation from Chicago. He was physically fit, brown-haired, disease-free and in possession of a foreskin. His name was James Borden, and he was, or had been, thirty-six. The body was altogether suitable, except for one detail: it was due to be cremated at a funeral home in Highland Park, Illinois, in two days. That presented a challenge. Hoffman asked the colonel if he had ever staged a black-bag job, and the colonel said no, but he was game for anything. That was a sentiment Hoffman rarely heard at CIA.

They worked up the body snatcher's version of a two-card monte. One corpse went into the cargo hold of the airplane in Fort Myers, and another one came off at O'Hare. The coffin was the same, but the man inside was now a seventy-eight-year-old retired insurance executive who had died of a heart attack. The colonel sent an NCO to the funeral home in Highland Park to make sure nobody decided at the last minute on a public viewing. They had prepared a cover story in case something went wrong--about how the airline had made a terrible mistake and confused two coffins in transit, but now it was too late because the other body had been cremated in Milwaukee. But they never needed to use it.

James Borden's corpse wasn't perfect, but it was close enough. The upper body was muscular, although the tummy had begun to sag, and he had a bald spot at the crown of his head. It turned out that he had an undescended testicle. The more Hoffman thought about these imperfections, the more he liked them. They were the real, human details that would make the larger deception believable. Perfect artifice includes mistakes.

To this corpse, Hoffman now attached a legend. He became Harry Meeker, not James Borden. They rented Harry Meeker an apartment in Alexandria and got him a home phone and a cell phone. Using the picture from Borden's Illinois driver's license, they obtained a Commonwealth of Virginia license, and then a passport,
and then a man in Support dummied up the right stamps and visas. For the passport photo, Hoffman's colleague Sami Azhar surfed the Web site of Borden's law firm and got a portrait of him that had been used in the firm's promotional mailings.

Harry Meeker's cover job would be with the U.S. Agency for International Development, so they got him a USAID identification card. They had business cards made up, too, with Meeker's private phone extension. It had the right prefix--712--but when you rang the number, the recording sounded hollow, not quite the voice of a real secretary but more like someone who was covering for Meeker. They gave Meeker a parking space beneath AID's headquarters in the Reagan Building on Pennsylvania Avenue, with a reminder card for his wallet in case he forgot the number of the space. This was the easy stuff; no more than the agency usually did in building integrated cover. Now they had to make Harry Meeker a real person.

Harry needed clothes. Hoffman was oblivious to fashion and wore whatever his wife picked out at Target, so he was the wrong person to go shopping. Azhar was dispatched to Nordstrom's; that seemed to have the right upwardly mobile, northern Virginia feel. Stylish, but also safe. The mental picture they had developed of Harry Meeker was of a rising CIA officer on the staff of the Counterterrorist Center at Headquarters, a midcareer guy trying to make his bones--a guy with smarts who had some Arabic and the savvy to handle a sensitive case. They didn't know yet exactly where the body would end up, but it would probably be somewhere along the northern frontier of Pakistan, where it could get cold. So Azhar bought a medium-weight blazer, a pair of pleated Dockers woolen slacks, a white shirt but no tie, a pair of rubber-soled shoes that would be suitable for trekking and city wear. He took the clothes to the cleaners several times until the sheen was gone, but the shoes were a problem. They looked too new, even when they had been deliberately scuffed. Shoes needed to feel as if real, sweaty feet had been in them. Azhar wore them for a week, with an extra pair of socks so that he wouldn't get a blister.

And what of the inner life of Harry Meeker? Ferris had already decreed that he should be divorced; that was the one biographical detail anyone would assume about a CIA officer--that he had dumped his first wife, and now he screwed around. To suggest the divorce, Azhar drafted a letter from a lawyer representing Meeker's imaginary ex-wife, "Amy," directing him to send his alimony payments to a new address and warning him not to contact Amy in person. Was Meeker a shit, or had his wife taken up with someone new? It worked either way.