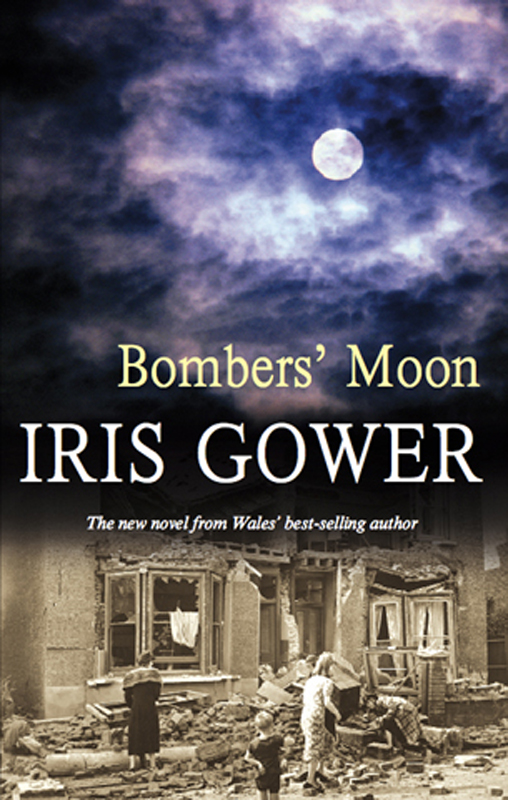 I might die tonight. The thought came to me as I was sitting under the table in our house waiting for a bomb to fall on me. The Germans had missed me in last night’s raid though a house down the road had vanished into the night in a big pile of rubble, all the people inside killed, crushed or burned. I saw that bit of news in the local paper; the date on the paper was February 1941, and even though I tore it into shreds and screwed the paper up for the fire, I couldn’t get the picture of the poor family, who had died so horribly, out of my mind. I cried for them even though I didn’t know any of them very well.

I used to see Mrs Griffiths in Taylor’s greengrocer’s shop, which always smelt of damp earth and potatoes; she always had a shawl wrapped round her, Welsh fashion, with a bald-headed baby hidden in its folds. She had a few other little ones hanging on her skirts, all girls I think. Their dad, like mine, was away fighting the war. He would come home on leave with his kitbag on his shoulder and find his house gone and his family all dead.

I tried to think of other things and, looking down, I noticed how crumpled my school skirt was; the pleats were spoiled and needed ironing but if I died I’d have no need of a school skirt anyway. And then I noticed how bony my knees looked glowing red in the firelight. I hated my knees.

I looked up at the underside of the table in an effort to distract myself from thoughts about my shortcomings and about bombs killing people and touched the screws holding the table in place; they were shining like gold as the flames of the fire licked patterns of red and yellow light across the room. I hoped briefly that the blackout curtain was safely tucked into the windows in the holes where the draughts came in and the light sneaked out.

There was a bit of writing on the underside of the table. I could only just make out the numbers, but for the rest it, it was too dark to see properly. And then my hair seemed to stand on end as I heard the first eerie drone of the bombers coming for me.

I looked quickly into the fire and concentrated, eyes half closed. Trying hard I could see two faces in the fire, mine and John Adams’. I liked John Adams but I wouldn’t admit that to anyone not even my best friend Sally Bevan. Our faces, mine and John’s, were close together in the picture in the flames, perhaps kissing. I’d never kissed a boy but I heard all about it from Sally. She’d kissed lots of boys, so she said.

Unmistakably, the noise of the planes was getting louder. I got goose pimples that were nothing to do with the cold of the February night with frost on the ground and a bright silvery moon overhead, a bomber’s moon, as the old people called it.

I felt the hard wood of the table rough under my fingers. I suppose there was a point in having the protection of the table but if a bomb dropped and the house fell on your head it wouldn’t matter much if you had a table or not, you’d still die from smoke and fire, that’s what I heard Tom Potty saying and he should know, he was an ARP warden. So I faced it; tonight if the German bombers came to our house I might die.

Worried with thoughts of dying I looked at the world of the parlour outside my hidey hole; all I could see were legs and feet. I could see old Mrs Evans’s slippers – one of them had a hole through which her big toe poked obscenely, like a big nose with chilblains. Alongside the worn slippers rested Kate Houlihan’s red shoes. Kate’s feet were small and neat but I’d heard her say the red shoes were too tight for her. Still, she’d wasted good coupons on those shoes and she’d wear them if it killed her, which was a funny thing to say; bombs killed you, shoes didn’t.

I could see Kate was proud of those shoes, the uppers shone with polish, but through the sole there was a bit of cardboard pushed inside to cover the holes.

And then pride filled me. I could see the lovely legs of my big sister, painted down the back with a line of black meant to look like the seam of a stocking.

Nylons: I’d heard the word and I knew that Hari longed for a pair of the gossamer stockings; but the big girls warned that American soldiers, when they came, would want to go ‘all the way’ in exchange for those wonderful nylons. I briefly wondered what ‘all the way’ meant and I opened my mouth to ask but just then something screamed like a banshee overhead and all the grown-ups huddled to the floor except Mrs Evans, who seemed to be asleep though one eye kept opening like the eye of a wary cat. Faces all around me were white and strained and I knew something awful was going to happen.

Suddenly the walls were flying apart. A great big wind engulfed the house and I couldn’t breathe. A brick hit my leg and I suddenly felt angry, the table was supposed to protect me but it looked as if I was going to die anyway. And then I went to sleep.

Hari sat on the bed in Mrs Evans’s house and stared at the unfamiliar pictures on the walls. They had been placed more to hide the damp patches than for any aesthetic desire to enjoy the wonders of scenic Italy. She held a cup of weak tea in her hands, wrapping her fingers around the warmth for comfort. She would have liked some sugar in her tea but Mrs Evans had used up her ration. Well, the poor old soul would have no need of ration books or tea, come to that she would be laying on a slab somewhere.

Hari shivered; she would have to find somewhere permanent to stay for Meryl and herself, she couldn’t impose on old Mr Evans much longer. It was only twenty-four hours since the bomb had dropped, flattening her home; it was a miracle that everyone, except stubborn old Mrs Evans had survived. In such a short time, everything had changed and yet the air raid seemed distant now.

Hari wanted to put the horror of it out of her mind and yet she was reminded of the helpless feeling of lying beneath the rubble, dust in her eyes and mouth, every time Mr Evans chewed at the subject, his eyes begging Hari for some titbit of information about his wife, some talisman he could hold on to for comfort. Now, his voice penetrated her thoughts.

‘Tell me, girl, what did my Maud say, what were her last words, did she give you a message for me?’

Hari couldn’t remember Mrs Evans speaking at all, all she could see was the older woman’s slippered foot with one toe poking out of the hole.

‘My sister tried to pull her down on to the floor but Mrs Evans wasn’t having any of that.’

She could see that wasn’t much help. ‘But we were together,’ she said, ‘Mrs Evans wasn’t on her own when . . . when the bomb fell. It would have been quick, you know, she wouldn’t have suffered.’ She had no notion if she was right or not but some of the strain eased from the old man’s face.

Mr Evans rubbed his eyes. ‘That’s one bit of comfort I suppose – but if only I’d stayed in that night, let other buggers do the firefighting, she might have been all right. They would have let me off, see, one of the younger men, you know that boy from the mines, Tommy Trinder we called him because of his big chin. He said to me, “Granddad, why don’t you go home, put your feet up,” he said, “you’ve had your war.”’

Unsinkable: The Full Story of the RMS Titanic by Daniel Allen Butler
The Lucifer Crusade by Mack Maloney
Mark of the Princess by Morin, B.C.
Goddess by Kelly Gardiner
Speaking Truth to Power by Anita Hill
How to Pursue a Princess by Karen Hawkins
Signal Red by Robert Ryan
Daygo's Fury by John F. O' Sullivan
Murder on Black Friday by P.B. Ryan
A Sad Soul Can Kill You by Catherine Flowers
Our partner