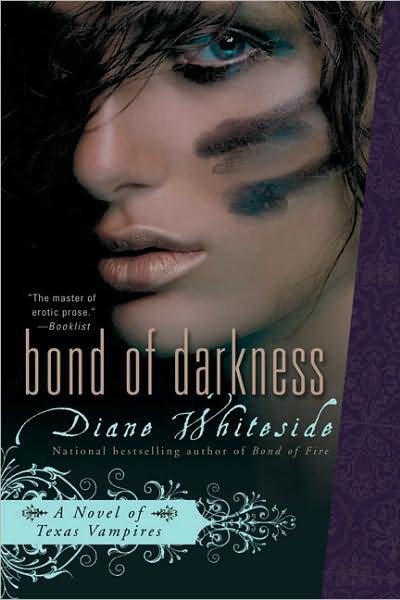 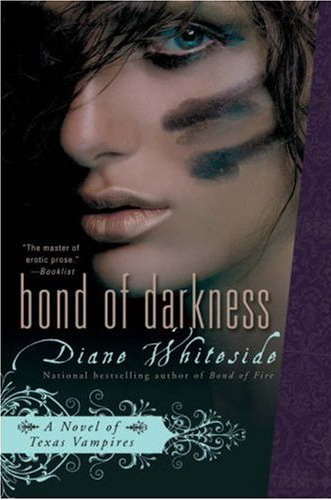 "Audacious… Blends European and American history into a shockingly heady brew… Whiteside merrily rampages through history and vampire lore, building an impressively sturdy and compelling narrative from the wreckage."

And the novels of Diane Whiteside

"Extremely titillating… an excellent and engrossing story. I know I couldn't put it down. I… eagerly look for more books by the amazing Diane Whiteside."

"A very interesting story related in prose so steamy that it fogs one's reading glasses."

"Erotically thrilling and suspenseful story line keeps the reader riveted to the book. Diane Whiteside has created fascinating characters that turn an ordinary story into a work of sensual art… It's a scorcher."

—
The Road to Romance

"A very sensual, romantic love story. It is very well written and leads you on a journey of sexual exploration sure to leave you tingling… Snatch this one off the shelf, it is a definite keeper."

(a division of Penguin Books Ltd.)

This is a work of fiction. Names, characters, places, and incidents either are the product of the authors imagination or are used fictitiously, and any resemblance to actual persons, living or dead, business establishments, events, or locales is entirely coincidental. The publisher does not have any control over and does not assume any responsibility for author or third-party websites or their content.

BERKLEY SENSATION and the "B" design are trademarks belonging to Penguin Group (USA) Inc.

The Texas vampires live in their own universe and it took a village to bring them to life.

This book is dedicated to Cindy, Leis, Leslie, the copy-editors, the art department, the text designers, the folks in sales and marketing, and everyone else whose name or role in bringing the Texas vampires trilogy to life I may have forgotten.

The vocabulary for the Texas vampire universe is drawn from feudal Spain. That very special time and place, where Christians, Moslems, and Jews lived in a rich cultural synthesis, was also the origin of the
vaqueros'
—and later the cowboys'—cattle herding skills and specialized gear.

A detailed glossary explaining those words, plus any other non-English terms, is provided at the end of
Bond of Darkness
.

Brief pronunciation guides to French and Spanish (with hints about Don Rafael's quirks) are available on my website,
www.DianeWhiteside.com
.

Steve brought her big Ford Expedition to a decorous stop before the impassive gates, gravel shifting under her tires like the butterflies flitting around her stomach. If she'd had any other choice, she wouldn't have come.

Posada would have her up on charges if he knew she was here. Especially if he even suspected she'd brought copies of the case files to a fortress which would probably take every tank at Fort Hood to break down.

To be viewed by the A Number One suspect in a string of unsolved murders.

No, she was supposed to have sauntered up with another Ranger or, even better, a gorgeous, blessed-by-a-judge subpoena to haul her suspect's ass into town for questioning…

No way. Not him. Even if he was the only Texan she knew who could have put those bite marks on a woman's neck—a vampiro's M.O.

She slapped the button and sent the window skidding down.

"May I help you, ma'am?" A very smooth voice came from extremely high-quality speakers, not the usual distorted tones.

He'd cleaned up all the details, including putting money into stuff that didn't show, of course.

Or should she say
they'd
put money into? And just how-many men did he surround himself with—and how well could he vouch for every one of them?

One Ranger, one riot. The riot's size didn't matter, since a Ranger could handle any number of bad guys. Every Texan knew that.

Even more, she had to believe Ethan's friends were all good guys—just the way she knew he was. The real killer had to come from someplace else. Somehow.

Would her stomach ever stop playing volleyball with that last slice of pizza?

She kept her face impassive and waited, without glancing at the four—no, five!—cameras watching her. Her hands stayed relaxed, easily visible, far away from her pistol. Her shoulders remained square, aligned forward, never twisting toward the back and all her tactical gear, including her assault rifle and shotgun. Guns wouldn't do her shit good against Ethan, anyway, given his speed.

She knew—God dammit, she knew every one of those girls' marks from personal experience, because she'd begged him to leave the same ones on her. Before she left today, if she left alive, he had to explain exactly what had happened to those victims.

Fifteen years of being his lover, off and on, said he couldn't have done it. She was betting her career and possibly her life on being right.