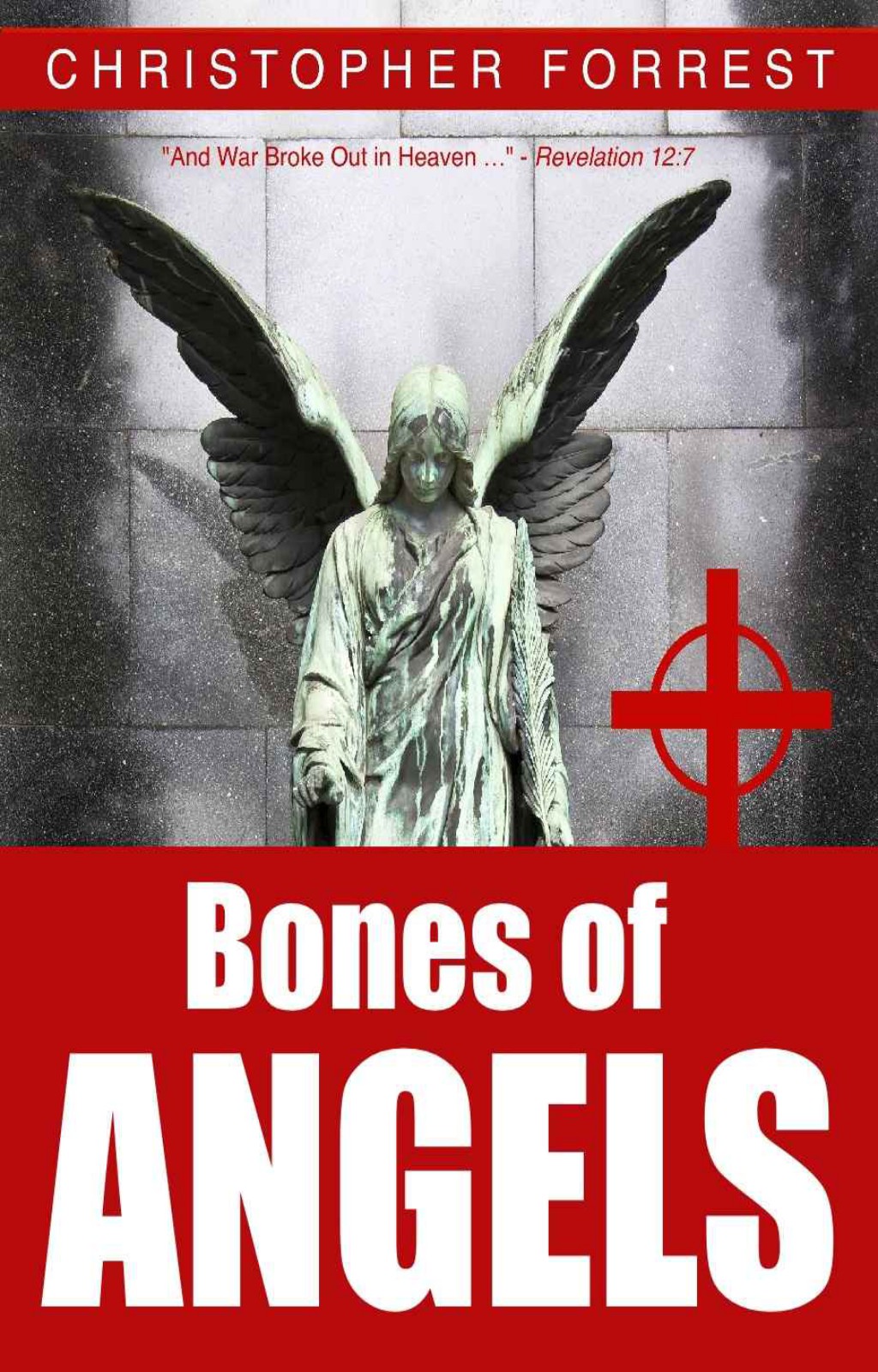 ALL RIGHTS RESERVED. This book contains material protected under International and Federal Copyright Laws and Treaties. Any unauthorized reprint or use of this material is prohibited. No part of this book may be reproduced or transmitted in any form or by any means, electronic or mechanical, including photocopying, recording, or by any information storage and retrieval system without express written permission from the author or publisher.

Christopher Forrest has lived on a sailboat, explored Mayan ruins in the jungles of Central America, been struck by lightning, free-dived the barrier reefs off the coast of Belize, and solo-hiked through the Everglades.

He is the bestselling author of The Genesis Code, Savage Bay and Bones of Angels. Hard at work on his next Titan Six novel, Forrest lives in Sarasota, Florida, with his wife Amy and four chihuahuas who think they are people.

May you find eternal peace.

From New York Times bestselling author
DOUGLAS PRESTON
:
"Launches the reader into a story of science and ancient mystery that will blow your mind."

The great dragon was thrown down, that ancient serpent, who is called the Devil and Satan, the deceiver of the whole world - he was thrown down to the earth, and his angels were thrown down with him."

The walls of the subterranean passage were made of human bones. Stacks of femurs and tibias, capped with rows of chalky, white skulls, framed the narrow passageways that led deep beneath the earth. Below the temple that the Saracens called Qubbat-as-Sakhrah, Godefroi St. Omer raised a sputtering torch above his head.

The flickering light reflected off the dented metal of his breastplate and illuminated a stairway leading down into the catacombs. St. Omer’s white surcoat, emblazoned with a large red cross and stained with the crimson blood of the many Turks he had slain, hung in tatters over his armor.

We shall call this place Templum Domini.

After the defeat of the Saracens in the first Crusade to reclaim the Holy Land from infidels, Godefroi St. Omer and his weary knights had taken up residence in the battered ruins of a Saracen mosque on Mount Moriah in Jerusalem.    The mosque was inhabited by monks who fasted and prayed daily in order to rededicate the holy site to Christ. They chanted hymns of thanksgiving by candlelight. Islam had been banished from Mount Moriah by valiant men such as Godefroi. As St. Omer had proclaimed, the site was once again the Temple of the Lord — Templum Domini.

The site where Abraham had raised his knife, ready to obey Yahweh’s command. Ready to sacrifice his son, Isaac. The site where an angel had stopped Abraham’s hand from its downward movement at the last moment before blood was shed.

The site known as Jerusalem.

But the monks had been agitated, nervous. Even frightened. They spoke of ancient legends revealed by scrolls buried in the walls of the mosque. The scrolls were in tatters, but they seemed to speak of a holy treasure beneath the temple.

For the next three months, St. Omer and the monks diligently explored the ruins of the ancient temple and the catacombs beneath it.

St. Omer beheld the wall of chalky human bones in the catacomb — bones of perhaps the earliest believers in the new faith that had spread outwards from Jerusalem after the resurrection. He crossed himself at the thought of where he was.

“It’s just through there, m’lord,” said the grimy monk behind him, pointing with a dirty, split fingernail to an open door at the bottom of the stairway.

A stone lintel above the door was engraved with a line of ancient letters. St. Omer squinted as he read the inscription.

TO THE TRUMPETING PLACE

St. Omer descended the stairway to the lowest level of the catacombs, favoring his wounded leg as he walked down the stone steps. The still air smelled foul. A large crypt dominated the center of the chamber below.

The top of a wooden ladder protruded from the ragged hole in the stone floor at the far end of the room. Smoky torchlight struggled to illuminate the ancient crypt.

St. Omer knelt above the ladder and peered into the void beneath him. A narrow passage twisted down into the rock. The base of the ladder rested on a stone landing twenty feet below.

The monk nodded and wrung his hands nervously.

St. Omer slowly lowered himself on the rungs of the ladder. His knee wouldn’t take his body’s full weight, and St. Omer was forced to hop down awkwardly from one rung to the next, using the strength of his arms to maintain his balance and absorb the impact of each drop down the ladder with his good leg.

Above, the monk peered over the edge of the opening.

About halfway down, St. Omer paused to rest. The wound in his right thigh had re-opened from the exertion, and a warm trickle of blood ran down his leg.

He uttered a curse. “Eala, scite!”

St. Omer turned and balanced himself on the rung as best he could, reaching down with both hands to tighten the blood-soaked bandage that encircled his thigh. The weight of his breastplate pulled his center of gravity forward, and St. Omer suddenly realized that he had made a mistake.

“Careful, m’lord!” called the monk from above.

St. Omer frantically reached back to grab hold, but his forward momentum carried his torso away from the ladder. He lost his tenuous purchase on the wooden rung and fell, head over heels, down the shaft.

He struck the stone, landed at the base of the ladder, bounced off the edge, and continued his fall into the nearly vertical cavern beneath.

Were it not for his armor, St. Omer would likely have died when he struck the floor of the cavern. Precious air rushed from his lungs on impact, and he gasped for breath. The bones of his left arm were shattered, and blood streamed down his face from a wide gash in his forehead. His torch, extinguished, had fallen into the darkness.

“Omer!” cried the monk. “Omer!”  The thin voice echoed against the stone.

Dazed, St. Omer managed to pull himself into a sitting position in the dark chamber.

“It comes now!” called the monk.

A lit torch fell from above, bouncing twice off the walls of the shaft before falling to rest on the cavern floor where St. Omer sat. The torchlight revealed an almost circular chamber twenty feet across.

Embedded in the wall of the cavern, a large skeleton reached out from the rock with one arm, as if trying to free itself from its stone tomb. It appeared to be the bones of an enormous man, well over seven feet tall. Some of the bones were encased in rock, like the stone itself had flowed around the skeleton and then solidified, trapping the remains.

What St. Omer saw next caused him to drop his head to the stone floor, clasp his hands tightly together, and begin to pray:  “Yea, though I walk through the Valley of the Shadow of Death, I fear no evil, for Thou art with me . . . ”

Above the shoulders of the skeleton, a pair of massive wings were embedded in the rock.

The archangel’s wings were spread wide, stretching twenty feet across, as if the entombed bones were on the verge of taking flight.

St. Omer struggled to his knees in supplication, his heart singing prayers. He felt both terrified and blessed. He crossed himself and shut his eyes tightly.

Then he fell silent. No, he was not worthy. Not even he, a leader of the Knights Templar, should gaze upon the bones in the stone before him. But he couldn’t help himself.

He raised his eyes to look upon the miracle he had found. There was a great flash of light.