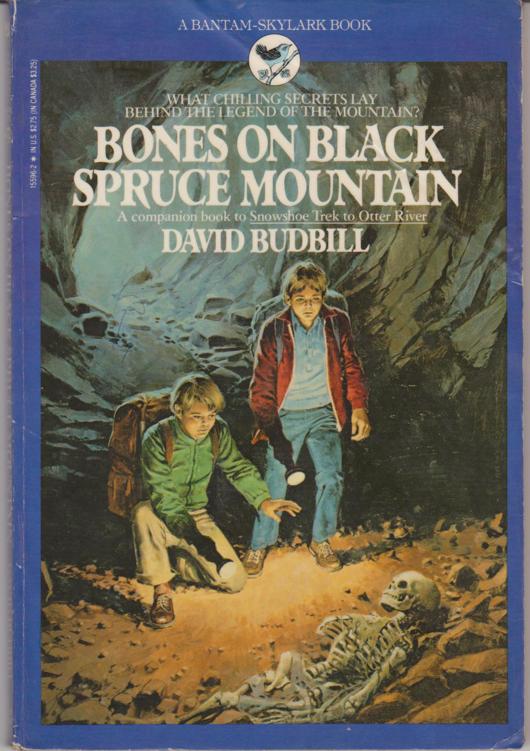 THEY HAD SPENT A FULL DAY CAMPING.

THEY LOOKED FORWARD TO A GOOD NIGHT'S SLEEP. . . .

Then suddenly from behind the lean-to, off toward Eagle Ledge, came a heart-stopping scream—not a howl, not a wail, but a scream. unlike any sound either boy had ever heard before. It was a horrifying, insane sound that gripped the boys with fear.

"What was that!" Seth whispered.

Both boys lay frozen in their sleeping bags, too afraid to, blink . . . .

"Budbill achieves suspense and pace effectively . . . and is particularly adept at making the wilderness setting vivid."

—Bulletin of the Center for Children's Books

Ask your bookseller for the books you have missed

BE A PERFECT PERSON IN JUST THREE DAYS by Stephen Manes

CASTLE IN THE ATTIC by Elizabeth Winthrop

ENCYCLOPEDIA BROWN AND THE CASE OF THE TREASURE HUNT by Donald J. Sobol

GHOST IN MY SOUP by Judi Miller

THE INCREDIBLE JOURNEY by Sheila Burnford

THE MUMMY, THE WILL, AND THE CRYPT by John Bellairs NUTTY CAN'T MISS by Dean Hughes

THE SPELL OF THE SORCERER'S SKULL by John Bellairs 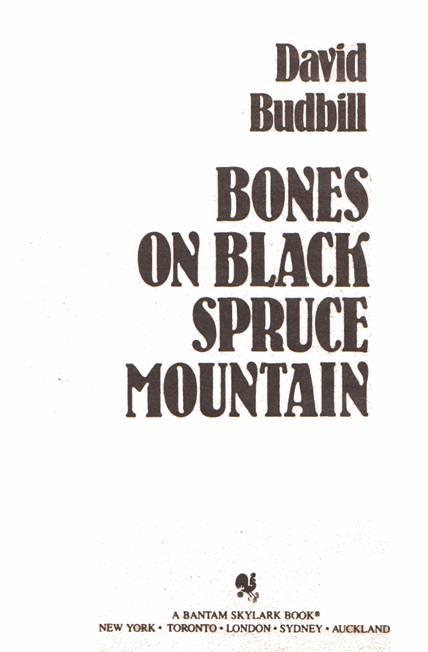 No part of this book may be reproduced or transmitted

in any form or by any means, electronic or mechanical,

including photocopying, recording, or by any information

storage and retrieval system, without permission in

writing from the publisher.

Bantam Books are published by Bantam Books, a division of Bantam Doubleday Dell Publishing Group. Inc. Its trademark consisting of the words "Bantam Books" and the portrayal of a rooster, is Registered in U.S. Patent and Trademark Office and in other countries. Marco Regis-trada. Bantam Books, 666 Fifth Avenue, New York. New York 10103.

For Frank and Eva,

Keepers of the mountain

“Do you think they’ll let us do  it?” Daniel questioned.

“They’d think we ran away. They’d send a search party.”

“So what. We could hide. If they came looking for us they’d get lost.”

“You want to back out? I think you’re scared.”

“Well if your getting cold feet sitting in your own dooryard, what are you going to be like up there on the mountain?”

Seth and Daniel lay stretched out under the huge pine tree in Daniel’s dooryard staring at the mountains in front of them. They liked looking at the mountains and especially at
the
Mountain, Black Spruce Mountain. Four miles away as the crow flies, it stood above its neighbors like a huge fist thrusting againsr the sky. Just now the bare rock cliff on its western face shone darkly in the afternoon sun.

Ever since the boys had been friends, they had watched the mountain together. It was more than just a mountain to them. They couldn’t say exactly what it represented but it was Important. Ravens nested there; bears lived in the cracks and caves; the big deer, the wise ones, the ones the hunters never shot, wandered there. Coyotes howled from its upper ridges, and even though no one had seen one, there were still stories that up there, somewhere near the top, a panther prowled the night. It was a place for no man, not to mention two thirteen-year-old boys. Yet, in an odd way, the mountain drew the boys to it. It was as if the mountain had a voice, as if it sang to them, calling them out and away from the safety and comfort of their homes, away from the ordered brightness of their daily lives and into the murky dangers of a mystery. The mountain was a wild and strange place, a place for dark creatures and marvelous adventures.

“You think I can’t take it up there?” Daniel asked. “You can’t be serious. I know as much about the woods as you do, maybe more.”

“You do not. I’ve lived around here all my life.”

“What’s that got to do with anything? Just cause I haven’t been around here since I was a baby doesn’t mean a thing.”

“Well, I can take care of myself.”

“So can I. I know what it’s like out there too. I know a hell of a lot more about how to survive than you do.”

“Big man. Come off it, Daniel. Besides, nothing’s going to happen we can’t handle.”

“I’m not saying it will. All I’m saying is, we better not get too cocky about this thing or we might end up being sorry.”

“I just don’t want to runaway, that’s all. Taking off like that is no good. You don’t know what it’s like.”

It was late in August. Summer was almost gone. On the far hills the boys could see here and there a poplar or a soft maple turning yellow, red. Cries of insects filled the air. It was a frantic, intense sound, heard only at the end of summer, in those few weeks before the first killing frost. The green world was giving away. Soon the trees would stretch their skinny fingers against the sky. Fall, that cold invader, stood waiting impatiently on the other side of the mountains.

Seth and Daniel knew they were like the insects; their summer lives were coming to an end. Two weeks from now, every morning, they would leave their hill farms and travel down the mountain to Judevine, the village in the valley below. School again. Their days of freedom were almost over.

“Daniel, you always do that! You’re always starting out on something and then stopping, like I wouldn’t understand. What is it?”

“Nothing. I don’t want to talk about it. Look let’s not fight. It’s just our folks have got to know; we’ve got to ask them. I’m not going unless we do.”

From where they lay, the boys could see off to their right the upper end of Bear Swamp. The Great Blue heron who lived there moved about more now. He too knew the time to leave was coming. They could see the brook winding through the middle of the swamp. In their mind’s eye they  could see the trout, the ones they hadn’t caught, finning quietly in the shadows. To their left the dirt road that passed in front of them slipped down into a small ravine, then climbed a hill and disappeared around a bend toward Seth’s house and a farm a mile further up the road. In front of them, beyond the barn the meadow, the woods began. From there as far as the two boys could see, there was nothing but trees and mountains. They were surrounded by trees; In fact, both Seth’s and Daniel’s farms were little more than small open places in a forest that seems to stretch endlessly away in every direction.

“Daniel, we’ve just got to make this trip; we’ve got to climb Black Spruce. I want to know whats up there; I’ve always wanted to know, ever since I can remember.”

The Gifted by Ann H. Gabhart
Zombie Town by Stine, R.L.
A Question of Blood (2003) by Ian Rankin
A Whisper In The Wind by Madeline Baker
Revenge of the ULTRAs (The Last Hero Book 4) by Matt Blake
Angel (A Companion Book to Monster) (Impossible #1.5) by Sykes, Julia
Time Ages in a Hurry by Antonio Tabucchi
The Select's Bodyguard (Children of the Wells - Bron & Calea Book 1) by Hayden, Nick
Butterfly Wings: An Egyptian Novel (Modern Arabic Literature) by Mohamed Salmawy
The Forever Song by Julie Kagawa
Our partner