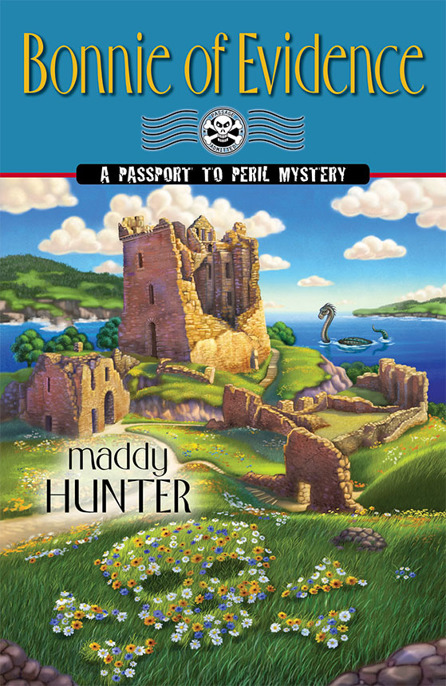 Bonnie of Evidence: A Passport to Peril Mystery
© 2013 Maddy Hunter

All rights reserved. No part of this book may be used or reproduced in any matter whatsoever, including Internet usage, without written permission from Midnight Ink, except in the form of brief quotations embodied in critical articles and reviews.

As the purchaser of this ebook, you are granted the non-exclusive, non-transferable right to access and read the text of this ebook on screen. The text may not be otherwise reproduced, transmitted, downloaded, or recorded on any other storage device in any form or by any means.

Any unauthorized usage of the text without express written permission of the publisher is a violation of the author’s copyright and is illegal and punishable by law.

Midnight Ink is an imprint of Llewellyn Worldwide Ltd.

Midnight Ink does not participate in, endorse, or have any authority or responsibility concerning private business arrangements between our authors and the public.

Any Internet references contained in this work are current at publication time, but the publisher cannot guarantee that a specific reference will continue or be maintained. Please refer to the publisher’s website for links to current author websites.

Heartfelt thanks to wordsmith extraordinaire and loyal fan, Christina Ward, for providing the title for the Iowa gang’s misadventure in Scotland. You rock, Christina!

Thanks to my childhood friend and intrepid high school debating partner, Susan Ainaire Lahti, for introducing the term “geocaching” into my lexicon.

And continued thanks to my diehard fans, whose expressions of delight at the crazy misadventures of my Iowa seniors make it all worthwhile.

T
HROUGHOUT HISTORY, WHEN PEOPLE
realized that the sulfur-spewing crater down the street was an active volcano, they invented both sober and creative ways to deal with the predicament.

The once mighty Incas flung virgins into theirs.

Ancient Pompeians built a resort around theirs.

Battle-hardened Scotsmen plunked a fortress on top of theirs.

Thankfully for the Scots, the volcano had stopped spewing sulfur when they undertook the project.

Tilly Hovick waggled her walking stick at the impenetrable hillfort turned castle, looking like a native in her beret and tartan plaid skirt. “The ancients called it
Din Eidyn
, meaning, ‘the stronghold of Eidyn.’”

She shrugged. “No one knows. But when the Angles invaded the country thirteen hundred years ago, they dubbed the rock Edinburgh, and it’s gone by that name ever since.”

To say that Edinburgh Castle dominated the cityscape was an understatement. It was so imposing, it looked like the medieval version of an alien mothership perched atop a mountain of stone, and oddly equipped with round towers, cannon embrasures, and an impossibly steep curtain wall. Its turbulent history had been explained to us by the local guide who’d provided our group with a personalized tour of the buildings and battlements, but his accent had been so thick, I’d only caught half of what he’d said.

My grandmother peered up at Tilly in awe. “Was that somethin’ you knew on account of you was a professor, or somethin’ you seen on the History Channel?”

“I believe it was the first historical fact out of our guide’s mouth this morning,” acknowledged Tilly.

“No kiddin’?” Nana gave a little suck on her uppers. “George said the fella was speakin’ English, but I didn’t believe him.”

“His burr was quite pronounced,” Tilly admitted. “I’m not surprised you couldn’t understand him, Marion. If I hadn’t cut my anthropological teeth mastering non-labial consonants on Faraulep Island, I wouldn’t have been able to understand him either.”

We were killing time on the Royal Mile, an inordinately wide, brick-paved street that stretched like a landing strip from Edinburgh Castle all the way to Holyrood Palace, where the Scottish Queen Mary had resided for a handful of years in the sixteenth century. Since our visit coincided with the city’s famous festival and military tattoo, we were sharing the street with musicians, jugglers, acrobats, actors, bagpipers, and craftsmen hawking everything from Celtic crosses to tam o’ shanters. Normally, I’d be concerned about losing guests in the chaos, especially since my tour group consists entirely of seniors who might be easily disoriented. But thanks to modern technology, my worries have all but been eliminated.

“Time’s up,” shouted Dick Stolee as the stopwatch on his cell phone beeped. He was carrying the most advanced mobile phone known to man, boasting science-fiction technology in a unit the size of an index card. Not only could he make face-to-face calls using the video feature, he could download the entire Library of Congress onto the e-reader, uplink to the international space station, and with his new and improved user-friendly global positioning system, knew he could visit anywhere in the world and never get lost again, even if he wanted to. The entire Windsor City contingent had purchased their phones at Pills Etcetera at a huge volume discount—knockoff Smartphones with high def, mega-pixel cameras. The only glitch was, when cell service went down, so did the cameras.

“Show of hands,” said Osmond Chelsvig, who’d popularized opinion polls long before Gallup or Zogby had ever hit the scene. “How many folks think that having Bernice on Team Five is gonna doom it to failure?”

“Point of order.” Tilly raised her walking stick in objection. “In the spirit of fairness, wouldn’t it be better to phrase the question in a way that doesn’t emphasize such obvious negative bias? We’re Iowans. We pride ourselves on being fiercely democratic. We demand impartial results.”

Osmond nodded. “Absolutely.” He paused thoughtfully and began again. “How many folks
kno
w that having Bernice on their team is gonna screw up their chances of winning Emily’s grand prize?”

Tilly’s hand flew into the air. Four others followed.

“We don’t got no one left to oppose,” observed Nana. “Everyone else hightailed it into the Fudge Kitchen.”

“The ‘ayes’ have it,” announced Osmond. “Team Five is toast.”

Yup. That was unbiased.

Dick Teig pumped his fist with glee. “More opportunity for the rest of us to make it into the final drawing, right Emily?” Dick had to be cautious about broad gestures with his fist because his head was so big, one wrong move, and he could knock himself out.

I’m Emily—Emily Andrew Miceli—glorified chaperone for a core group of a dozen Iowa seniors who regularly sign up for international tours. On this trip, twenty-nine guests from across the Corn and Rust Belts had booked the Scottish tour offered by Destination Travel—the travel agency my husband opened after moving across the Atlantic to settle in my hometown of Windsor City. The prize Osmond alluded to is a promotional offer I thought up to attract more business in a bad economy—a drawing at the end of the tour to award a free trip to the lucky winner. And the only thing a guest would have to do to qualify for the drawing would be to locate a series of objects stashed in obscure places throughout Scotland by avid geocachers.

Decades ago, when children ran all over their neighborhoods armed with lists of nonsensical items to find, they called it scavenger hunting. Today, adults still look for the same nonsensical items, but they’ve expanded the playing field to the entire world, and they’re using Internet websites and sophisticated GPS units to assist their search. Today, the pursuit is called geocaching, and it’s become the favorite pastime of every member of the Windsor City Senior Center, next to texting and synchronized back floating in the new warm-water wading pool.

“Don’t get too cocky,” I advised the group. “This is only the first site, so I wouldn’t count Team Five out just yet.”

“Did you miss the discussion?” asked Dick Stolee. “They can’t win.
Bernice
is on their team.”

I’d divided the group into five teams of five guests apiece and stipulated that each team would have a limited amount of time to find the cache. After all, we were on a tour and had a schedule to maintain. Whichever team registered the most number of finds at the end of the trip would be eligible to enter the lottery for the grand prize, with yours truly drawing the name of the winning team member out of a hat. On paper, it looked like a pretty good system, but as the saying goes, the devil is in the details.

“You wanna see what we found in the first cache?” Nana asked me as she fiddled with her phone. She held up the picture of a narrow alleyway that dipped below street level as it snaked between two buildings. “This here’s the alley where it was hidin’, but the locals don’t call ’em alleys. They call ’em ‘closes,’ and they’re so historic, each one’s got its own name on a fancy sign on the entrance. I can’t remember what this one’s called on account of I forgot to take a picture of the sign.”

New York City had alleys, too, but when I’d lived there, the only signs I’d ever seen had read KEEP OUT.

She showed me the next photo—swirls of green and yellow set against a rough gray background. “This is the graffiti what someone spray-painted all over the wall. It musta been the real expensive brand ’cuz I didn’t see no signs of chippin’.”

George Farkas thumped toward me on his wooden leg. “This one’s my favorite.” He angled his phone so I could see the image on the screen. I tilted my head left and right.

“Steel bars. They’re on all the windows in the alley. I thought they added a nice touch to the general ambiance.”

Right. Kind of like razor wire added a nice touch to state prisons.

This opened the floodgates for Osmond, Tilly, and the two Dicks to crowd around me, offering up their own photographic masterpieces.

“This is the doorstoop where the container was stashed,” enthused Tilly.

“Here’s the container,” said Osmond, displaying a photo of a plastic box the size of a brick.

“This is the little notebook what was inside,” said Nana. “We signed and dated it to prove we was actually here and found it.”

“And then we put it back under the stoop for the next team to find,” Dick Stolee chimed in. “And we did it way under the fifteen-minute time limit.”

“And a pen,” said Tilly. “A very thoughtful gesture on the part of the person who hid the cache. Without a writing implement, you can’t sign the register.”

“And if you don’t sign the register, you don’t got no right to score it as a find,” added Nana. “The rules say you gotta have proof.”

“Does anyone ever leave anything inside for you?” I asked. “A little reward for your efforts?”

“We
are
rewarded,” said George. “We get to see our names posted on the official geocaching website in really big black letters.”

A Quick Sun Rises by Rath, Thomas
Inferno (Play to Live: Book # 4) by D. Rus
Uncharted Seas by Dennis Wheatley
The Wings of Dragons: Book One of the Dragoon Saga by Josh VanBrakle
McNally's Dare by Lawrence Sanders, Vincent Lardo
The Hit List by Ryan, Chris
Eye of the Storm by Simons, Renee
Obsession (The Plus One Chronicles) by Lyon, Jennifer
Galin by Kathi S. Barton
Rabbi Gabrielle's Defiance by Roger Herst
Our partner