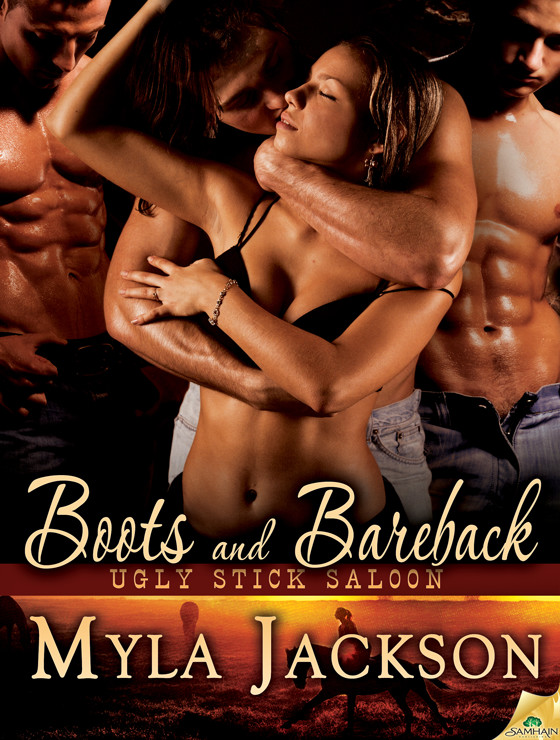 I dedicate this book to those wonderful bars in the big and small towns where people go to connect with others and find more there than they imagined possible. Mechanical bulls, guys who’ll actually dance, cowboys, cowgirls, friends and lovers. A place where everyone knows your name.

“Well, I reckon it’ll do for a bachelor party. Mind if your old man comes along for a beer?” Jonathon O’Brien, owner of the Rockin’ O Ranch hadn’t seen the inside of the Ugly Stick Saloon for a couple years. He hadn’t felt much like getting out since his wife had died of breast cancer.

“What’s not to love about this place?” Gabe, Jonathon’s oldest son, waved a hand at the crowded interior of the Ugly Stick. “It’s got atmosphere.”

“They can provide the whiskey and stripper,” Tanner, the second oldest, noted. “That’s all we need.”

“Don’t be such an ass.” Sean elbowed his older brother.

“Why’s that being as ass?” Tanner frowned. “So I like women. The nakeder the better. And that makes me an ass? I don’t see you turning down the fairer sex.”

“Point made.” Sean chuckled. “But you’re still an ass.”

Tanner punched his brother in the arm. “Yeah, but you’re my brother. Takes one to know one.”

“Can you quit jackin’ around and focus?” Gabe interceded. “We’re here to commission this place for our little brother’s bachelor party.”

Jonathon shook his head, staring around the table at three of his four sons, his only daughter around the joint somewhere, waiting tables. “I can’t get over it. Of all my children, my youngest son’s going to be the first to get hitched.” He frowned at his grown sons, ranging in age from twenty-seven to thirty-one. “What are the rest of you waiting for?”

Gabe, Tanner and Sean’s eyes widened and they stared at each other.

“Start what?” Jonathon waved a hand around the room. “There are plenty of nice young women around these parts, many of which would be happy to marry into the O’Brien family.” Each of his sons stood to inherit large parcels of land when he died. What woman wouldn’t want to be a part of that? “You’ve all proven yourselves good ranchers, increasing the size of our herd, building our stock of working and racing horses. And you’ve each done good at your other interests. You’re all strong and good-looking men, even if I
am
a little biased. ’Course you look like your old man.” He puffed out his chest and grinned. “Okay, better, but then I have a few years on you.”

“Dad…” Tanner shook his head. “We’ve been over this. We’ll get married.”

“When we find the right woman,” Sean finished.

A dark-haired beauty passed by, carrying a tray loaded with beer mugs and whiskey shooters. A rowdy cowboy reached out and pinched her ass.

She turned, her cheeks bright pink, and slapped the man in the face, almost spilling the tray of drinks. “Keep your hands to yourself, George.”

Jonathon chuckled, liking that she was embarrassed by the unwanted advance, but that she could stand up for herself. She reminded him of his dearly departed wife when she was about that age. “What about her?”

“Isabella?” Gabe asked, his eyes narrowing. “She’s pretty, all right. But I’ve asked and she refuses to go out with me.”

“Really?” Sean grinned. “I asked her too, and got the same brush-off.”

Tanner’s gaze followed Isabella as she wove through the tables. “Apparently, she doesn’t care for the O’Briens.”

Gabe clapped his brother on the back. “Turned you down too, did she?”

“I didn’t say that.” Tanner glowered at Gabe.

Jonathon chewed on a toothpick, studying the gal in question. “Got good hips. Would bear children well.”

“She’s got nice—” Sean made the universal motion for figure until Tanner planted his elbow in his belly.

“Don’t be so coarse.” Tanner’s brows rose. “Isabella’s a nice girl. That’s probably why she won’t go out with you.”

“Did any of you ask her more than once?” Jonathon demanded.

“After she turned me down flat, I didn’t see the point.” Gabe scratched the five-o’clock shadow on his chin. “Still don’t know why she wouldn’t even go out for a cup of coffee.”

“You were shit-faced drunk. That’s why.” Tanner lifted his mug and emptied the last swallow. “Point is, Dad, I haven’t found the right woman.”

“I kinda thought Isabella was that woman. She’s not like any of the others.” Sean stared after Isabella as she returned to the bar with a tray of empties and orders for more drinks.

“Yeah, she’s got a great laugh when you can get her to loosen up.” Gabe’s gaze followed Isabella as well. “But you can’t make someone love you.”

“Are any of you even trying to find a woman?” Jonathan glanced at each of his sons, one at a time.

Tanner frowned. “Dad, it’s not like shopping. You can’t just choose one off the shelf.”

“You have to be persistent and let a gal know you’re serious.” Jonathon smacked his palm on the table. “I want grandchildren. Lots of them. You can’t be too picky or all the good ones’ll be gone before you know it.”

“And how long did it take you to find Mom?” Sean asked.

Jonathon’s head rose, his chest swelling. “I fell in love with your mother the first time I saw her. I knew by the second date I was gonna ask her to marry me.”

Isabella stopped at their table and collected the empties. When she smiled, all three of Jonathon’s sons smiled back. Damned if they weren’t taken with this little girl.

“Can I get you boys anything?” she asked.

“Well, as a matter of fact…” Jonathon started.

Jonathon frowned at his oldest son. “I’d like to talk to the owner.”

“And we’d like another round.” Tanner drew a circle with his finger over the table.

“I’ll be back in a minute.” Isabella turned, her long, rich, brown hair swinging over her shoulders, and her short, frayed cutoffs barely covering the curve of her ass.

“Yeah, I think she’ll do,” Jonathon muttered, an idea spinning in his head. “Is Isabella one of the for-hire strippers?”

“I don’t think so.” Gabe glanced at the dance floor, his boot tapping to the beat of the music. “Why don’t you ask her when she comes back?”

“I will.” It was about time someone did something about getting his sons married off. Since the three at the table didn’t seem to be in any hurry, it was time he took matters in his own hands. “You say a woman owns this place now?” Curious about the owner, Jonathon craned his neck, searching the interior of the saloon for an older female face that looked like she’d be the owner.

“That’s right.” Tanner nodded toward the strawberry-blonde beauty behind the bar, helping out. “Audrey Anderson bought it.”

“The pretty blonde? Is she old enough to serve whiskey?” Jonathon scratched his head.

“That’s what I mean.” Jonathon’s lips twisted. “If you boys take too long deciding which girl is right for you, you’ll miss out on all the good ones.”

“Well, hell, Dad, I’d better get out on that dance floor and find me a woman before they get snatched up.” Tanner pushed back his chair and stood, cracking his knuckles. “Lemme see. That pretty redhead oughta do.” He struck out across the floor for the bar. Before he got there, another man stepped up to the redhead, said something that made her smile and led her out on the dance floor.

Gabe chuckled across the table. “Seems our brother missed his shot at another one of the good ones.”

“See what I mean?” Jonathon crossed his arms.

Tanner moved to the brunette who’d been sitting next to the redhead. She shook her head and held up her hand, flashing a wedding ring.

After one more try, Tanner returned to the table, a scowl marring his tanned brow. “Didn’t really feel like dancin’ anyway. Besides, I think the show is about to start.”

Isabella returned with a tray of drinks, plunking them on the wooden tabletop, one at a time.

Jonathon leaned toward her as she passed by him. She even smelled pretty. Yup, if she was willing and the creek didn’t rise, he’d hire her to perform at the bachelor party. Maybe that would get the ball rolling.

Audrey Anderson moved in behind Isabella. “I’ll take that tray. You’d better get into your costume for the show.”

“All my girls either sing or dance as part of their duties at the Ugly Stick Saloon.” Audrey smiled at Isabella’s retreating figure. “And we have a special presentation tonight. A new toy I’ve added to the Ugly Stick arsenal and hopefully a way for the girls to earn a few more tips.” Audrey winked.

“What is it?” Sean leaned forward.

“You’ll see.” She nodded toward the stage where all three of the Gray Wolf brothers were pushing a big machine out onto the dance floor.

Tanner’s frown lightened. “Is that a mechanical bull?”

“Close.” Audrey grinned. “It’s a mechanical horse. The only one of its kind, as far as I know.”

“I’ve never seen one before. I thought mechanical bulls went out in the seventies.” Jonathan had ridden a few mechanical bulls in his younger days. “They never did give the same look and feel of riding the rodeo circuit, but they were good for training and impressing the gals.”

“I found this one at an auction and had it repainted and tuned up.” She clapped her hands and glanced at the chair beside Jonathon. “Mind if I join you? Isabella is up first and I didn’t get to see her practice.”

Jonathon jumped up and pulled the chair out for her. “Please. I have something I want to talk to you about after the show.”

Audrey dropped into the chair, turning to face the dance floor. “Isabella really didn’t want to be the first to perform on the horse in public, but I insisted. She’s the best rider we have.”

“She doesn’t think she’s sexy enough to pull it off.” Audrey snorted. “That girl just needs to look in a mirror.”

Jonathon agreed and his sons apparently did too.

Gabe, Sean and Tanner craned their necks, waiting for Isabella to appear.

Jonathon wanted to see Isabella in action as well, before he committed to hiring her for the bachelor party. Although he’d pretty much decided on her anyway. She was pretty, sexy and could take care of herself.

The band struck up the tune to some country song about saving horses and riding cowboys.

From the back of the bar behind the stage, Isabella emerged wearing black leather chaps, black cowboy boots with rhinestone studs and a bright red bikini. Nothing else.

Isabella’s gaze remained fixed on the mechanical horse. She placed her boots one in front of the other as she walked through the throng of cowboys. When she reached the horse, Jackson Gray Wolf grabbed her around the middle and swung her up on the fiberglass body.

“That horse doesn’t have a saddle. How’s she going to stay on?” Jonathon asked.

Jonathon shot a glance at Gabe, Tanner and Sean. Each of his sons’ gazes followed the woman up onto the horse, where she straddled the beast, wrapping her legs around its middle. She gave Jackson a nod and he reached to push the On switch.

Isabella kept her seat, her back straight, her legs tightening around the fiberglass body.

As the music swelled, the horse settled into a smooth and easy rocking motion.