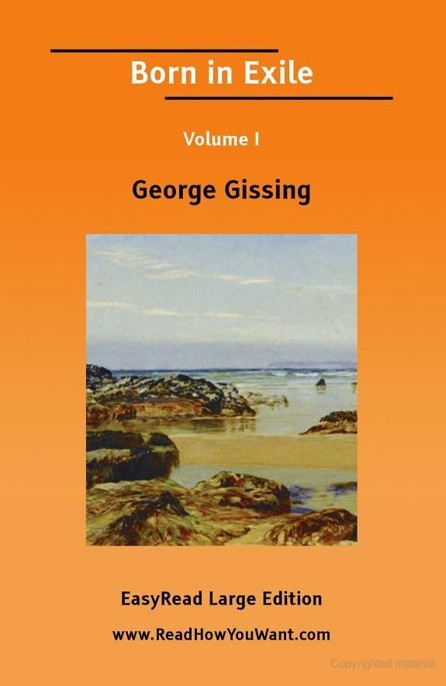 Born in Exile
By
George Gissing
CONTENTS
Part I
CHAPTER I

The summer day in 1874 which closed the annual session of
Whitelaw College was marked by a special ceremony, preceding the
wonted distribution of academic rewards. At eleven in the morning
(just as a heavy shower fell from the smoke-canopy above the
roaring streets) the municipal authorities, educational
dignitaries, and prominent burgesses of Kingsmill assembled on an
open space before the College to unveil a statue of Sir Job
Whitelaw. The honoured baronet had been six months dead. Living, he
opposed the desire of his fellow-citizens to exhibit even on canvas
his gnarled features and bald crown; but when his modesty ceased to
have a voice in the matter, no time was lost in raising a memorial
of the great manufacturer, the self-made millionaire, the borough
member in three Parliaments, the enlightened and benevolent founder
of an institute which had conferred humane distinction on the
money-making Midland town. Beneath such a sky, orations were
necessarily curtailed; but Sir Job had always been impatient of
much talk. An interval of two or three hours dispersed the
rain-clouds and bestowed such grace of sunshine as Kingsmill might
at this season temperately desire; then, whilst the marble figure
was getting dried,—with soot-stains which already foretold its
negritude of a year hence,—again streamed towards the College a
varied multitude, official, parental, pupillary. The students had
nothing distinctive in their garb, but here and there flitted the
cap and gown of Professor or lecturer, signal for doffing of
beavers along the line of its progress.

Among the more deliberate of the throng was a slender, upright,
ruddy-cheeked gentleman of middle age, accompanied by his wife and
a daughter of sixteen. On alighting from a carriage, they first of
all directed their steps towards the statue, conversing together
with pleasant animation. The father (Martin Warricombe, Esq. of
Thornhaw, a small estate some five miles from Kingsmill,) had a
countenance suggestive of engaging qualities—genial humour,
mildness, a turn for meditation, perhaps for study. His attire was
informal, as if he disliked abandoning the freedom of the country
even when summoned to urban ceremonies. He wore a grey felt hat,
and a light jacket which displayed the straightness of his
shoulders. Mrs. Warricombe and her daughter were more fashionably
equipped, with taste which proclaimed their social standing. Save
her fresh yet delicate complexion the lady had no particular
personal charm. Of the young girl it could only be said that she
exhibited a graceful immaturity, with perchance a little more
earnestness than is common at her age; her voice, even when she
spoke gaily, was seldom audible save by the person addressed.

Coming to a pause before Sir Job, Mr. Warricombe put on a pair
of eyeglasses which had dangled against his waistcoat, and began to
scrutinise carefully the sculptured lineaments. He was addressing
certain critical remarks to his companions when an interruption
appeared in the form of a young man whose first words announced his
relation to the group.

'I say, you're very late! There'll be no getting a decent seat,
if you don't mind. Leave Sir Job till afterwards.'

'The statue somehow disappoints me,' observed his father,
placidly.

'Oh, it isn't bad, I think,' returned the youth, in a voice not
unlike his father's, save for a note of excessive self-confidence.
He looked about eighteen; his comely countenance, with its air of
robust health and habitual exhilaration, told of a boyhood passed
amid free and joyous circumstances. It was the face of a young
English plutocrat, with more of intellect than such visages are
wont to betray; the native vigour of his temperament had probably
assimilated something of the modern spirit. 'I'm glad,' he
continued, 'that they haven't stuck him in a toga, or any humbug of
that sort. The old fellow looks baggy, but so he was. They ought to
have kept his chimney-pot, though. Better than giving him those
scraps of hair, when everyone knows he was as bald as a
beetle.'

'Sir Job should have been granted Caesar's privilege,' said Mr.
Warricombe, with a pleasant twinkle in his eyes.

'What was that?' came from the son, with abrupt
indifference.

'What do I care for Caesar's privileges? We can't burden our
minds with that antiquated rubbish nowadays. You would despise it
yourself, father, if it hadn't got packed into your head when you
were young.'

The parent raised his eyebrows in a bantering smile.

'I have lived to hear classical learning called antiquated
rubbish. Well, well!—Ha! there is Professor Gale.'

The Professor of Geology, a tall man, who strode over the
pavement as if he were among granite hills, caught sight of the
party and approached. His greeting was that of a familiar friend;
he addressed young Warricombe and his sister by their Christian
names, and inquired after certain younger members of the household.
Mr Warricombe, regarding him with a look of repressed eagerness,
laid a hand on his arm, and spoke in the subdued voice of one who
has important news to communicate.

'If I am not much mistaken, I have chanced on a new species of
homalonotus
!'

'Indeed!—not in your kitchen garden, I presume?'

'Hardly. Dr Pollock sent me a box of specimens the other
day'—

Buckland saw with annoyance the likelihood of prolonged
discussion.

'I don't know whether you care to remain standing all the
afternoon,' he said to his mother. 'At this rate we certainly
shan't get seats.'

'We will walk on, Martin,' said the lady, glancing at her
husband.

'We come! we come!' cried the Professor, with a wave of his
arm.

The palaeontological talk continued as far as the entrance of
the assembly hall. The zest with which Mr. Warricombe spoke of his
discovery never led him to raise his voice above the suave, mellow
note, touched with humour, which expressed a modest assurance. Mr
Gale was distinguished by a blunter mode of speech; he discoursed
with open-air vigour, making use now and then of a racy
colloquialism which the other would hardly have permitted
himself.

As young Warricombe had foreseen, the seats obtainable were none
too advantageous; only on one of the highest rows of the
amphitheatre could they at length establish themselves.

'Buckland will enjoy the more attention when he marches down to
take his prizes,' observed the father. 'He must sit at the end
here, that he mayn't have a struggle to get out.'

'Oh, it doesn't affect me,' said Buckland, with a laugh.

'I feel pretty sure I have got the Logic and the Chemistry, and
those are what I care most about. I dare say Peak has beaten me in
Geology.'

The appearance in the lower part of the hall of a dark-robed
procession, headed by the tall figure of the Principal, imposed a
moment's silence, broken by outbursts of welcoming applause. The
Professors of Whitelaw College were highly popular, not alone with
the members of their classes, but with all the educated inhabitants
of Kingsmill; and deservedly, for several of them bore names of
wide recognition, and as a body they did honour to the institution
which had won their services. With becoming formality they seated
themselves in face of the public. On tables before them were
exposed a considerable number of well-bound books, shortly to be
distributed among the collegians, who gazed in that direction with
speculative eyes.

Among the general concourse might have been discovered two or
three representatives of the wage-earning multitude which Kingsmill
depended upon for its prosperity, but their presence was due to
exceptional circumstances; the College provided for proletarian
education by a system of evening classes, a curriculum necessarily
quite apart from that followed by the regular students. Kingsmill,
to be sure, was no nurse of Toryism; the robust employers of labour
who sent their sons to Whitelaw—either to complete a training
deemed sufficient for an active career, or by way of
transition-stage between school and university—were for the most
part avowed Radicals, in theory scornful of privilege, practically
supporters of that mode of freedom which regards life as a
remorseless conflict. Not a few of the young men (some of these the
hardest and most successful workers) came from poor, middle-class
homes, whence, but for Sir Job's foundation, they must have set
forth into the world with no better equipment of knowledge than was
supplied by some 'academy' of the old type: a glance distinguished
such students from the well-dressed and well-fed offspring of
Kingsmill plutocracy. The note of the assembly was something other
than refinement; rather, its high standard of health, spirits, and
comfort—the characteristic of Capitalism. Decent reverence for
learning, keen appreciation of scientific power, warm liberality of
thought and sentiment within appreciable limits, enthusiasm for
economic, civic, national ideals,—such attributes were abundantly
discoverable in each serried row. From the expanse of countenances
beamed a boundless self-satisfaction. To be connected in any way
with Whitelaw formed a subject of pride, seeing that here was the
sturdy outcome of the most modern educational endeavour, a
noteworthy instance of what Englishmen can do for themselves,
unaided by bureaucratic machinery. Every student who achieved
distinction in to-day's class lists was felt to bestow a share of
his honour upon each spectator who applauded him.

With occasional adjustment of his eye-glasses, and smiling his
smile of modest tolerance, Mr. Warricombe surveyed the crowded
hall. His connection with the town was not intimate, and he could
discover few faces that were familiar to him. A native and, till of
late, an inhabitant of Devon, he had come to reside on his property
near Kingsmill because it seemed to him that the education of his
children would be favoured by a removal thither. Two of his oldest
friends held professorships at Whitelaw; here, accordingly, his
eldest son was making preparation for Cambridge, whilst his
daughter attended classes at the admirable High School, of which
Kingsmill was only less proud than of its College.

Seated between his father and his sister, Buckland drew their
attention to such persons or personages as interested his very
selective mind.

'Admire the elegant languor of Wotherspoon,' he remarked,
indicating the Professor of Greek. 'Watch him for a moment, and
you'll see him glance contemptuously at old Plummer. He can't help
it; they hate each other.'

'But why?' whispered the girl, with timid eagerness.

'Oh, it began, they say, when Plummer once had to take one of
Wotherspoon's classes; some foolery about a second aorist. Thank
goodness, I don't understand the profound dispute.—Oh, do look at
that fatuous idiot Chilvers!'

The young gentleman of whom he spoke, a student of Buckland's
own standing, had just attracted general notice. Rising from his
seat in the lower part of the amphitheatre, at the moment when all
were hushed in anticipation of the Principal's address, Mr.
Chilvers was beckoning to someone whom his eye had descried at
great distance, and for whom, as he indicated by gesture, he had
preserved a place.

'See how it delights him to make an exhibition of himself!'
pursued the censorious youth. 'I'd bet a sovereign he's arranged it
all. Look how he brandishes his arm to display his cuffs and gold
links. Now he touches his hair, to point out how light and
exquisite it is, and how beautifully he parts it!'

'What a graceful figure!' murmured Mrs. Warricombe, with genuine
admiration.

'There, that's just what he hopes everyone is saying,' replied
her son, in a tone of laughing disgust.

'But he certainly is graceful, Buckland,' persisted the
lady.

'And in the meantime,' remarked Mr. Warricombe, drily, 'we are
all awaiting the young gentleman's pleasure.'