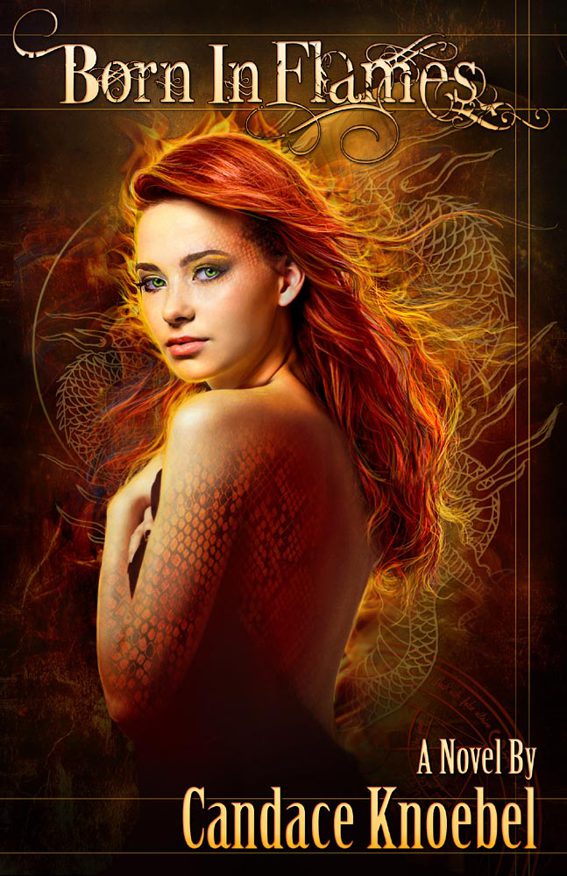 This is a work of fiction. All of the characters, organizations, and events portrayed in this novel are either products of the author’s imagination or are used fictitiously. Any similarity to actual events or people, living or dead, is entirely coincidental.
Born in Flames. Copyright © 2012 by Candace Knoebel.
Edited by Kate Wright. Cover by
www.ravven.com.
All rights reserved including the right to manufacture in any format, sell, or distribute copies of this book or portions of this book. For information, address 48fourteen, PO Box 17132, Sugar Land, TX 77496.
http://www.48fourteen.com
ISBN-13: 978-1-937546-08-3
ISBN-10: 1-937546-08-X
For my very best friend, Sonya. Without your unconditional support and talk-me-off-theledge ideas, I probably wouldn't have made it. For my wonderful mother and mother-inlaw, who have stood by me and supported all my quirks and dreams. And most importantly, for my understanding husband, for having patience and a new joke always on hand.

I love you all with all my heart.

THE CALL OF THE ORB was strong now that it rested in my hands. A song thrummed in my chest as I felt the veins in my neck beating wildly. Looking at it now, the change wasn’t as scary as I had thought it would be. Even with knowing that I could be staring my possible death in the face. The question was—would I be strong enough to sustain these powers given to me? Maybe I was just scared of The Fates choosing my destiny, or maybe I was scared that what was about to happen would forever change my life.

Either way, growing up I had always hoped that my life would mean something more than just being a foster child, but this, this was much bigger than anyone could imagine. And what lies ahead? Well if it’s anything compared to what I am going through now, then I expect my life to fall into a whole new level of crazy. And I think it may be just what I was looking for.

7 Years, 364 Days Earlier
THE NIGHT WAS STILL AS the pale moon shone through my tiny bedroom window. It was a full moon, one of the largest I had ever seen. Astral said it was a sign of something coming. But what was coming remained unanswered.

All life besides the midnight owl was sleeping—as I should have been—yet I lay there, waiting for the sun to tell me it was time to begin my daily routine.

The owl quivered, shaking off the dewy night as luminescent droplets fell to the mossy earth, then resumed picking at his feathers. We were one and the same, he and I—creatures of the night. Somehow things were easier for me at night, its quiet solitude a balm to my soul. Unfortunately though, I was still part human and expected to be up at the crack of dawn.

I kicked at my wrinkled covers feeling uncomfortably warm. Why did I have to defy the order of things? Wake, eat, school, sleep. That’s the way things are supposed to happen. Apparently my restless mind did things a little differently.

If only I had known then how drastically my life was about to change, I may have held onto this moment a bit longer and appreciated the quiet innocence that came with being ten years old. Maybe even appreciated the restlessness that I felt every night. Because even though it may not have been the proper routine to follow, it was my routine. Wake, eat, try to concentrate on learning my powers, and then claw my way to sleep.

But The Fates are funny like that. They don’t always wait around for you to decide when things should happen. Sometimes they interfere. At least that’s what happened in my case.

I turned from the lonely pallid moon, trying to find the safe haven of sleep by adjusting my rumpled pillow and snuggling up in my blanket in hopes that comfort would help push me into slumber. Of course this attempt didn’t prove to be helpful.

A sigh escaped my lips as I propped up onto my elbow in a huff and faced the burning candle resting on the end table next to my bed. The swaying flame always distracted me from my problem with insomnia, the ghostly shadow it cast moving as a pendulum marking the lost hours of sleep. It kept me company when everyone else was fortuned with dreams.

The flame danced for me under my control, a power that I had been blessed with from birth. If I wanted to be pessimistic, I could say the power was more like a curse, considering the destiny The Fates had laid out for me.

I reached out and placed my fingers to the flame, reveling in the feel of the biting tingle to my skin. The tiny flame moved up my arm, warming me through. Fire was the one stable element in my life, a constant burning that ignited my soul.

Another owl hooted in the distance and I smiled as I looked back to the one perched outside my window, returning the hunter’s call.
Lucky him
, I thought with a bit of jealously. Even the owl has a friend. If Astral were listening, he would tell me how selfish my thoughts were on such a lovely quiet night. The perks of having a trainer who can read your mind.

As if summoned by my thoughts, my door suddenly burst open. I shot straight up, turning to face the intruder as I pinched the wick to put out the flame and stabled the bouncing pendant on my neck. Astral’s glowing blue eyes shone through the darkened hallway, casting a dim glow.

Merline Lovelace by Countess In Buckskin
Ghost Shadows by Thomas M. Malafarina
Eyeless In Gaza by Aldous Huxley
After Midnight in the Garden of Good and Evil by Marilyn J Bardsley
Snowblind by Christopher Golden
Fried Pickles and the Fuzz by Calico Daniels
Fatally Bound by Roger Stelljes
Diamonds are a Girl's Best Friend by Jenny Colgan
Tales of Downfall and Rebirth by S. M. Stirling
Reverend Cash: Let Us Prey by Sa'id Salaam
Our partner