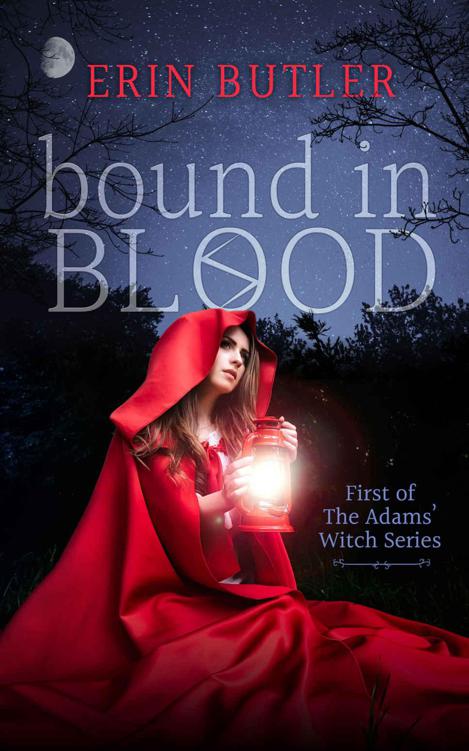 Copyright © 2015 by Erin Butler. All rights reserved, including the right to reproduce, distribute, or transmit in any form or by any means. For information regarding subsidiary rights, please contact Erin Butler.

For Grandma and Grandpa Blake

Nine-hundred miles of I-95 taught me that Virginia was as much like Florida as flip-flops were like heels. Not necessarily better in any way, just different. Gone were the palm trees and sandy beaches I’d spent my entire life around. In their place? Pine trees. A lot of them.

Outside the SUV, headlights touched on the dark, foggy back-road the GPS told me to turn down a few miles back. Houses were few and far between. Actual signs of life? Even more sparse. Woods, fields, and scurry animals seemed to be a hit in Virginia, though.

I tried to hold a picture in my mind of what would happen when I finally met her. Imagine the different scenarios that could play out. I’d had two days of driving to prepare for this after all and yet, I still had no idea what I was going to say.

Now that I was so close, I could let myself believe that this was actually going to happen. My hands shook. Insane thought after insane thought swirled around inside as if I sailed the deep, dark waters of the Atlantic in a rowboat minus the motion sickness pills.

Finally, the GPS’s tinny, indifferent voice announced, “You have reached your destination.” I managed to turn into the short, circular driveway, grip stumbling along the wheel.

The house rose up like a statue in front of me. Big, foreign, a secluded shadow in a clump of old maples. The roofs peaked at different heights and different angles, and the windows, some oval, some rectangular, were adorned with intricate woodwork. The house may have been beautiful a hundred, maybe even fifty years ago, but even in the dark, I could see cracked white paint and broken molding.

One of the first floor windows held the only sign of life. Streams of different colors played out on the paned glass, deep blues and subdued reds. While I watched, a bright white flashed erratically before dimming to black. I crouched over the wheel to get a better look. An old TV set, the kind framed in wood, sat along the far wall of the room.

“Well, we’re here,” I said.
We
. If I wasn’t so tired and nervous, I might’ve laughed. It wasn’t as if someone else had cared enough to make the journey with me.

It didn’t matter all that much, though. I was used to being on my own.

The clock in the dash read 10:30. I cringed. I didn’t know a lot about old people, but 10:30 seemed a little late on a regular day. It was most definitely late on a meet-your-great-niece-for-the-first-time day.

Time had gone by like warp speed this afternoon. Being on the road was like being in another dimension. There were never enough minutes for the miles I put in between here and home and definitely not enough miles between Mom and me.

My skin pricked. I wouldn’t enjoy what I had to do next. Well, maybe a little. A smile crept onto my face, but it quickly vanished.

I thrummed my fingers against my thigh trying to think of an out. Then, after taking a long look over at the passenger seat and the brown leather book—
my father’s
brown leather book——lying there, I groaned. “Don’t. Wimp. Out. Now.”

Finally, I reached out and hit the call button on the steering wheel. It beeped, waiting for direction. “Call Mom.”

The car’s Bluetooth dialed and then rang. Loud music and the cackle of Mom’s exaggerated laughter belted from the speakers. From experience, I knew the higher her laugh, the more she wanted to impress. And what, she had been single for almost two weeks now? So yeah, it was time.

Nine-hundred miles between us and I was still embarrassed. Who called their daughter girlfriend? “I asked you not to call me that.”

A male’s husky laugh erupted over the speaker and mingled with hers.

I couldn’t resist an eye roll, though it always got a better reaction when I was actually in the same vicinity as my mother. Of course, I did get pleasure out of knowing I got away with one without hearing, ‘You’d better roll those eyes right back to the beginning.’

“Of course I know it’s Tuesday. Fat Tuesday! We’re at the Clamshell!”

The speaker bounced the shrill voice around the interior of the car before giggles once again took over. I careened my head. There was no getting away. Three states in between us and I was still trapped.

Two nights ago, the same ensnared feeling had choked me. Mom came home after a late night out, not caring I already lay in bed asleep. Could have been the same guy she flirted with tonight, but my educated guess—and I was usually right—she’d come home with a totally different guy that evening. They probably dressed the same, had the same gelled hair and roughly the same amount of money in savings, but they were different. Different color hair. Different color eyes. Different name. Different opinions on Cici having a grown, teenage daughter.

Unrestrained laughter—and a male’s to match—strangled me through the floorboards at two in the morning. I freaking lost it. I threw the sheets back, marched across the hall to my mother’s room, and started tearing at things.

The dresser first. When finished, I smiled down at a rainbow of undergarments littering the four-poster bed. Then, I moved to the closet. By the time I was done, every single one of her outfits was strewn over the floor. Or the bed. Or her dresser.

On the way back to my room, an old shoebox I’d flung to the opposite side of the room lay in my way. It was open, some of the contents spilling out among camis and blouses. The corner of a brown leather book caught my attention. I picked it up, expecting it to be Cici’s.

I was disappointed at first; thinking posting her diary all over Facebook would be more than a little awesome, but what I found meant more than that. I decided then that I’d had enough.

Even now, with all this physical distance between us, she still played the same old games. Except I held all the ammunition this time.

“Here? The Clamshell? Where are you? We’ll come say hey.”

Yeah. Right. Sometimes my mother forgot I was only seventeen. “No. Mom, I’m in Adams.” I paused, waiting for the name to resonate. Waiting for a tiny, little light bulb to go off in her head. Apparently, the alcohol numbed her memories along with her speaking ability because she didn’t say anything. So I said, “Virginia. Adams, Virginia.”

“You’re where? You’re breaking up.” Other than the throbbing of the house music behind Mom’s slurring, the sound was like crystal. Clear enough to hear her whisper, “One sec,” to Mr. Husky Voice.

I sighed, realizing this conversation headed nowhere. As usual. I didn’t know why I expected any different. Boredom had already moved into Cici’s brain and set up shop. I pictured her cozying up next to this guy on one of the brown leather couches at The Clamshell, covering up the speaker on her cell and promising to get rid of her annoying daughter as soon as possible. She wanted to get back to her
guy friend,
as she always called them. Glad to know I was missed.

I lost her already. She wasn’t even listening anymore. “Not unless you want to come nine-hundred miles to pick me up. Besides, you already know who Rose is.”

Cici’s voice sobered in an instant. “Huh? Where are you again?”

She made the annoyed guttural sound she always did when she had to “deal” with me. “Can this wait until we get home?”

“It’ll be pretty hard to do that since I’m not coming home.”

“Huh? Sarah, you’re not making any sense. I’ll be home in a little while.” She sighed. “Listen, I’ll stop by the Bucks, get you a mocha-chino, and then we’ll sit out on the patio and have a nice chat.”

There it was. The mom-of-the-year voice.

The phone muffled. It sounded like Cici said, “Teenagers…” to her guy friend. Teenagers, like the word stank of garbage. Like that one word encapsulated our entire relationship.

The thump, thump of the bass quieted and an echo of a pair of heels bouncing off walls sounded in my ear. I took a deep breath and started in again. “Out of all those times I asked you about Dad, you lied. You lied to me, Mom.” I blinked away the heat from behind my eyes and pushed a level breath from my lungs. “I found his journal in your closet.”

“Here we go again.” Mom giggled. “You’re something else, you know that? You barely even knew him and you like him better than me.”

My hands curled to fists. “Give me a reason not to. But besides, this isn’t about you. It’s not always about you.” I sucked in air. Why did it always have to be so hard with her? “Have you even noticed I’ve been gone for two days? Or have you and Romeo been pretty tied up with each other?”

“You watch your mouth,” Cici snapped. A faucet turned on and I heard the splash of the water hit the sink. After a few moments, it was silent again. “Let’s just both calm down. I will talk to you about this when I get home.”

Again, I spoke slow, making it easy for her to understand in case she really was intoxicated. “I’m not home now and I’m not coming home later either.”

“Then I’ll pick you up at Jaime’s.” Cici’s voice tinged in amusement. “I’ll drag you out of there kicking and screaming if I have to.”

“I’m not at Jaime’s. Aren’t you listening? I’m not even in Florida anymore.”

I already told you. I’m at Dad’s aunt’s house.”