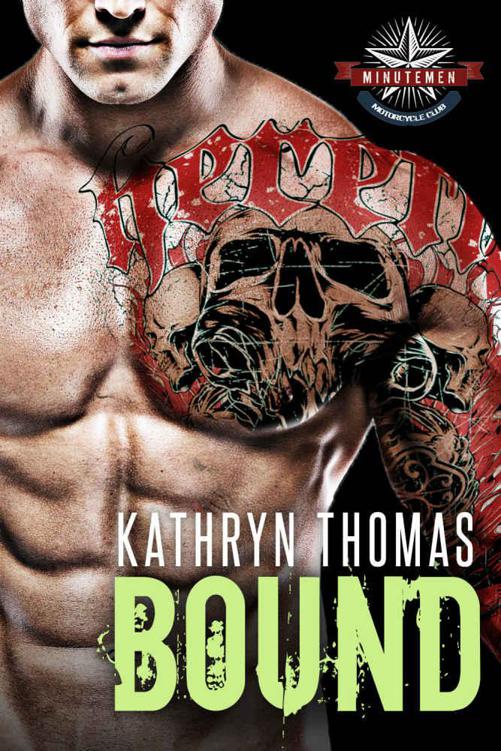 This is a work of fiction. Any names, characters, places, and incidents are products of the author's imagination or are used fictitiously and are not to be construed as real. Any resemblance to actual events, locales, organizations, or persons--living or dead--is entirely coincidental.

Bound copyright @ 2016 by Kathryn Thomas. All rights reserved. No part of this book may be used or reproduced in any manner whatsoever without written permission except in the case of brief quotations embedded in critical articles or reviews.

To receive a free copy of an exclusive short, join my mailing list here or by clicking on the banner below:
http://eepurl.com/-PngD

And check out my LATEST RELEASES BELOW

All available for FREE on Kindle Unlimited

The thing about the California desert is that it smells and feels like a no-man’s land. Smack in the middle of nowhere, somewhere in-between California, Arizona, and Nevada, the Mojave Desert is the driest of California’s deserts. The wildest. The most dangerous. The dangers that lurk beneath the lines of Joshua trees that make up the natural boundaries of the area have little to do with the wildlife or the unforgiving nature of the land. It all comes down to human presence.

Camilla Hernandez was getting to learn that the hard way. She should have known, really. She was no rookie, and she should have made sure Kurt had checked, double-checked, and triple-checked his information before she accepted an assignment to cover the escalating violence of the cartels on the border between the U.S. and Mexico.

“You know these people,” Kurt had said. “You’re the perfect choice for the job.”

Ordinarily, Camilla would have taken offense. But not in this case. It was indeed true that she knew these people. They weren’t
her
people, like most obnoxious Republican assholes seemed to believe whenever they learned about her Latina and Mexican origins, but still she knew them. She had worked on stories on them before, mostly with the help of repentant convicted gang members.

As it turned out, however, she didn’t know them well enough. She had not seen it coming, Tobias’ betrayal. He served her up to his ex-MC—the Tar Mongols, the most dangerous proxy club for the Mexican cartel operating within California— like a piece of cake. He had lied about that, too. He had told Kurt he was an ex-member of a much less dangerous club. The delivery of the nosy TIME reporter to the Tar Mongols was supposed to be his ticket back into the club’s good graces. And it had worked. It had worked all too well.

And so it was that Camilla now found herself on the back of a roaring motorcycle with her wrists tied together in front of her, a gag in her mouth, and a heavy hood over her head. It was ridiculous that they thought she could ever remember the roads they were taking—the Mojave Desert all looked the same to her, especially considering the fact that she was
not
supposed to cross it. She was supposed to be in Mexico, where it was more dangerous but at least it was more familiar and she would have had a chance.

Instead, here she was, miles away from the Mexican border, heading towards God-knew-what. Except that while God may have had a few doubts regarding what was going to happen to her, Camilla had quite a few ideas—and not one of them painted a pretty picture. Even without her experience as an investigative reporter specializing on the drug dealers on the southern border, it wasn’t hard to figure it out; everyone knew what the cartel did with people who stuck their noses where they didn’t belong.

She wanted to ask so many questions to the man riding in front of her, who smelled like leather and sweat and whiskey, but the gag prevented her. She wanted to ask Tobias what had possessed him to do this. She wanted to remind him that she had been very respectful of him and of his past while she conducted her interview with him. She wondered whether any of what he had told her was true. Probably not—and was this really the way he was going to repay her? She wanted to tell him that it didn’t matter how many investigative reporters he brought back to his club’s president; he was probably dead anyway, just for pretending he would make a deal with a journalist.

But Camilla could hardly breathe through the gag and the hood, let alone speak a word. She would have to sit in the back of this motorcycle and wait for the president of the Tar Mongols to kill Tobias and then rape her and kill her, too.

She shivered. Camilla Hernandez was not a religious person, but here in the middle of the Mojave Desert, she squeezed her eyes shut underneath the heavy hood someone else had stuck over her head, and she prayed.

As impossible as it was to believe, given her current situation, Camilla must have fallen asleep, because the next thing she was aware of were gunshots and screams. There was a blood-curdling shout, followed by an equally chilling gurgle that let her know that Tobias’ accomplice and fellow MC member, the one they had met after landing in Mexico City the previous day, was dead.

She heard Tobias swear in Spanish under his breath, and then she was being dragged from the motorcycle and roughly shoved down to the dirty ground. She didn’t dare make a sound, even when the desert’s rocks scraped at her bare arms. She bit her lip almost bloody to stifle a surprised yelp when a booted foot shoved her further down until her cheek touched the dirt.

“Let me pass! This has nothing to do with you!” Tobias shouted, presumably at their assailants.

“You’re crossing our territory, Alvarez. It’s got
everything
to do with us.” The voice that replied belonged to a man, and it was confident and derisive, laced with an undercurrent of mirth that for some reason sent a shiver down the length of Camilla’s spine.

She swallowed hard as her mind, trained to work under pressure, quickly processed what was happening. The man knew Tobias, which meant that he knew the Tar Mongols. And she knew of only one club that had been carrying on an open war with the Tar Mongols for years.

Camilla felt the hair at the base of her neck stand up as realization hit. Was this really the Minutemen’s territory? Could Tobias and his now-dead friend really have been that stupid as to cross into it with no backup? If that was true, and if she really was within Minutemen borders, she was as good as dead. Still, an odd sense of relief washed over her; at the very least, her virtue would remain intact. Stephan Walker, the Minutemen’s president, was known for punishing rape by cutting off the man’s scrotum before executing him.

Nonetheless, she thought her situation hadn’t improved by much.

This time, Camilla couldn’t help but gasp at the sudden pressure of metal against the back of her head.

“We don’t know that woman,” another voice called out. “Why do you think it’d make a difference to us?”

Camilla gritted her teeth past the gag in her mouth.
Fucking cowards!
she thought furiously, bristling with more than just the desert heat.

There was a moment of silence that to her felt like an eternity. And then Tobias said, “I know for a fact your boss doesn’t like it when you get women killed.”

Hope surged through Camilla’s defeated heart. Could that really be true? Could Stephan Walker be against violence on women in general? Could his unexpected magnanimity be her salvation?

“Well, Stephan’s not here, is he?” the first voice said. “Besides, our Sniper’s got his sights on you, Tobias. You so much as
try
to pull that trigger, you’ll get your brains blown out.”

Camilla rolled her eyes underneath the black hood. She wished she could see something—even just shadows would do—but it appeared she would have to rely on her hearing alone.

Camilla could feel the barrel of Tobias’ gun against the back of her head start to shake. She held her breath, because that could mean that he was either going to drop the gun or go berserk and pull the trigger.

She didn’t know how much time passed—if seconds or minutes—but finally Tobias moved the gun away from her. And then a shot rang out.

Camilla jumped and screamed despite herself, the sound muffled by the gag and the hood. She heard the scrambling of heavy boots on the desert soil, and then she was hauled unceremoniously upward.

“Are you okay?” a voice asked, and she recognized it as the voice of the first man who had spoken. “Answer me!” He shook her roughly. “Are you okay? Nod yes or shake no.”

Camilla swallowed past her very dry throat. She nodded shakily.

“Good. Let’s go.” He pulled her forward, and Camilla dug the heels of her hiking boots into the desert dirt and held up her bound wrists.

The man laughed at her. “I don’t think so, princess. Not until we can figure out who you are and just what the hell you were doing with our mortal enemies. Something tells me you’re not just an innocent bystander in all of this.”

Camilla really wanted to aim a fierce kick at his balls, but she couldn’t even see where his head was, let alone his crotch.

“Come on,” the man said, and he roughly manhandled her up a brief but steep rise.

“Don’t worry, sweetheart, we don’t hurt women,” the second man who had spoken said once she had reached the top. “Well, not usually,” he added as an afterthought. “It really depends on who you are.”

Camilla bit down hard on the bandana that was gagging her. She couldn’t wait until she would be able to talk again. She was manhandled onto the back of yet another motorcycle, and as they sped away into the desert, she tried to think of what she would say to their president once she was face-to-face with him. She had the feeling Stephan Walker and his Minutemen wouldn’t be very thrilled to discover that the Tar Mongols had brought an investigative reporter amongst their midst, no matter the reason.

Camilla closed her eyes underneath the hood and tried to think. Stephan Walker was known for his ability to smell lies from a mile’s distance, and she wasn’t sure that even all of her experience would be enough to concoct a story that would convince him not to shoot her on the spot.

o 922034c59b7eef49 by Allison Wettlaufer
Deep Deception 2 by McKinney, Tina Brooks
Underground Vampire by Lee, David
The Chocolate Run by Dorothy Koomson
The Fear Trials by Lindsay Cummings
Devoted to the Blizzard: A romantic winter thriller (Tellure Hollow Book 3) by Adele Huxley
The Whispering Mountain by Joan Aiken
The Way Forward Is With a Broken Heart by Alice Walker
Kee Patterbee - Hannah Starvling 01 - The Chef at the Water's Edge by Kee Patterbee
Pistols at Dawn by Andrea Pickens
Our partner