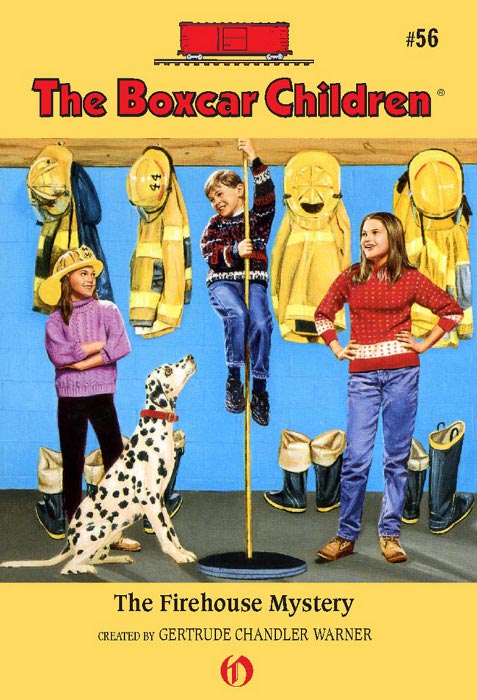 1 A Trip to the Firehouse

4 Not Just a Bunch of Old Junk

5 Just Give Up Now

6 A Whole Lot of Money

CHAPTER 1
A Trip to the Firehouse

L
ook at what I found!” cried six-year-old Benny Alden, running into the old boxcar. It was a chilly Saturday afternoon, and his sisters and brother were sitting around a card table working on a jigsaw puzzle. They looked up and smiled at Benny, who was carrying a toy fire truck and wearing a firefighter’s hat on his head.

“Hey, Benny,” said twelve-year-old Jessie, “where’d you get that hat?”

“I was looking around in the attic, and I found it in an old trunk,” Benny said. “You wouldn’t believe how heavy it is!” He pulled the leather hat off his head and handed it to her. 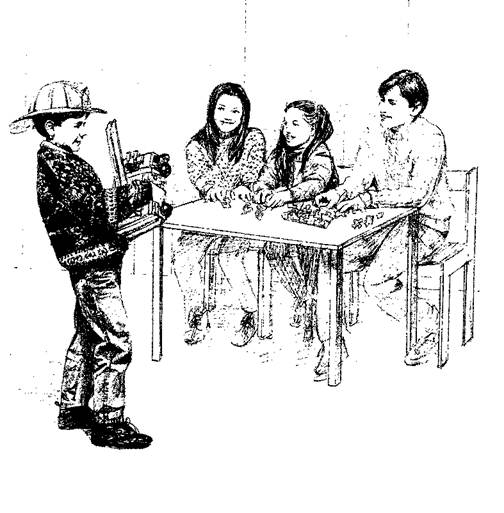 “Wow, it really is heavy, Benny,” Jessie agreed. “I think it’s a real firefighter’s hat, not just a play hat.”

As his sister turned the hat over in her hands, fourteen-year-old Henry spotted something. “What’s that written on the inside?”

Jessie looked where he was pointing. “It says
James Henry Alden
!”she announced with surprise. That was their grandfather’s name.

“I don’t know. Let’s go ask him,” Henry suggested, walking quickly back to the house. The others followed close behind.

The children found James Alden sitting in his favorite chair in the living room, sipping a cup of coffee and reading the newspaper. They had lived with their grandfather since shortly after their parents died. At first, before the children had met him, they’d been afraid he was mean. So they’d run away and lived in an old boxcar they found in the woods. When Mr. Alden finally found them, they learned that he was kind and loving. He took them to live in his big, comfortable house. He even had their boxcar brought to the backyard so the children could play in it.

“Grandfather! Grandfather!” Benny cried, running ahead of the others and climbing onto Mr. Alden’s lap. “Were you a firefighter?”

“Now, where did that question come from?” Grandfather asked, smiling.“Benny found this in the attic,” Jessie explained, holding up the hat.

“Well, would you look at that,” Mr. Alden said, taking the hat from his granddaughter. “I haven’t seen this in a long time.”

“So it
is
yours! You
were
a firefighter!” Benny said with excitement.

“Yes, many years ago I was a volunteer firefighter,” Grandfather said.

“What does that mean?” Violet wanted to know.

“I had my regular job during the day, running the mill. But at night and on weekends, I helped the full-time firefighters,” Grandfather explained.

“A few,” Grandfather said. “I did whatever they needed me to do.”

“Wow,” said Benny. The children looked at their grandfather with proud smiles. It was amazing all the things he’d done!

Grandfather placed the hat on Benny’s head. “I have an idea. How would you like to go visit the firehouse where I worked? I’m sure Mike Reynolds — the fire chief — would give us a tour if he’s not too busy.”

“Hooray!” the other three shouted.

A few minutes later, the Aldens piled out of their car in front of the Greenfield Firehouse. It was an old red-brick building, covered with ivy. A garage on the side held the fire trucks. Inside, a man with silvery gray hair greeted them. He was wearing dark pants and a starched white shirt with a dark tie and a gold badge.

“Too long!” Mike said. Then he saw the four children standing behind Mr. Alden. “Are these your grandchildren?”

“Yes, they are,” Grandfather said, turning to introduce them. “This is Henry, Jessie, Violet, and Benny.”

“I’ve heard so much about the Alden family. It’s nice to finally meet you!” said Mike.

Everyone smiled and shook hands with him.

Benny looked up at Mike, his eyes wide. “Are you a real fire chief, Mr. Reynolds?” he asked.

“Neat!” said Benny. Then he frowned. “Why aren’t you wearing a big hat and coat?”

“We only wear our gear when we’re out fighting fires,” Mike said. Just then a white dog with black spots came running up and put its paws up on Mike’s leg. “Sparky!” Mike said, bending over to rub the dog’s head.

“I knew there had to be a dalmatian here!” Jessie cried, leaning over to pat him. Sparky sniffed her hand eagerly and then licked it.

Mike turned to Grandfather. “So, James, what brings you by the old firehouse?”

“I was just telling the children about my days as a volunteer here,” Grandfather said. “I thought that perhaps if you weren’t too busy, you could give them a little tour and tell them what it’s like to be a firefighter.”

“I’d love to,” said Mike. “How about if we go look at the fire trucks first?”

But as they were turning to go out to the garage, a man in a wheelchair came up and said, “Chief?” The man had reddish blond curly hair and a mustache, and was wearing the navy blue pants and T-shirt of a firefighter. With him was a gray-haired woman in a business suit. She had an angry frown on her face.

“This is Janet Lerner from the Greenfield town council. She needs to speak to you about something,” Steve said.

Suddenly the smile disappeared from Mike’s face. “Yes, Ms. Lerner, you called this morning. We’ll talk in my office.” Mike turned to Steve and the Aldens. All his cheerfulness was gone and his face looked gray. “I’m sorry, but this is something very . . .” he paused as if looking for the right word. “Serious,” he said at last. “Steve, would you mind taking over for me?” Mike quickly introduced the Aldens.

“My pleasure,” Steve said, as Mike led Ms. Lerner into his office and shut the door.

Jessie whispered to Henry, “That was certainly mysterious.”

Henry nodded. He, too, had noticed that Janet Lerner looked angry, and that Mike had seemed upset to see her. What was going on?

But before Henry could say anything, Benny called out, “Come on! Let’s go see the fire trucks!”

S
teve, are you a firefighter, too?” Violet asked as they followed him.

“Yes,” he said, wheeling himself through a side door. “I used to be on active duty, until I was injured in an accident. Since then I haven’t been able to walk. So now I work in the office, keeping the records, handling the schedules, taking care of the payroll — that sort of thing.”

The side door led into the garage. “Look at that!” said Benny, staring up at the huge red truck in front of him.

“This is the ladder truck.” Steve pointed to the long ladders on top. “We use it to get up to the tops of buildings to fight fires and help people who might be trapped inside.”

“Is that the pumper?” Henry asked, pointing to a smaller truck.

“Yes,” said Steve. “It’s got a five-hundred-gallon tank of water in it.”

“You use that to fight the fire, right?” Benny asked.

“That’s right, Benny. Believe it or not, those five hundred gallons only last a few minutes,” Steve explained. “We use that to ‘knock down’ the fire when we first arrive on the scene — to put out a small fire or try to get a bigger fire under control. But often we need more water.”

“Is that what fire hydrants are for?” asked Jessie.

“Yes,” Steve said. “When we first arrive at a fire, some of the firefighters go find a hydrant or another source of water. Using long hoses, the water from the hydrant is pumped through this pumper onto the fire. The pumper provides the pressure to make the water go far and fast.”

The Aldens noticed that the door of the pumper was open and a heavy firefighters’ coat hung on it. On the floor below it was a pair of heavy boots already tucked into a pair of heavy pants. It looked as if someone had just stepped out of the clothes and left them there.

Violet was about to ask why when suddenly a loud bell filled the air, and then there was a voice speaking over a loudspeaker. “Smoke reported in the basement of the office building on the corner of Third and Elm.”

Steve quickly guided Grandfather and the children off to the side of the garage. There they were out of the way, but could see what was happening. Several firefighters ran quickly in from the firehouse. In no time they had put on their heavy pants and coats. They grabbed their hats and oxygen masks and climbed onto the ladder truck.

One firefighter ran to the driver’s side of the pumper and took off her sneakers. Now the Aldens realized why the clothes had been left on the floor that way. In one easy step, she stepped into her boots and then pulled up the pants. Next she took the jacket that was hanging on the open door and put it on. She jumped into the truck and put on her hat and oxygen mask, which were already inside on the seat. Another firefighter got in on the other side.

The ladder truck and the pumper pulled out of the garage, their sirens wailing.

“They were so fast!” cried Jessie.

“They have to be,” Steve said. “Speed is very important when you’re going to fight a fire.”

“What were those masks for?” asked Benny.

“You mean this?” Steve asked, taking a strange-looking mask out of one of the lockers.

“This attaches to a tank of oxygen that’s worn on your back,” Steve explained.

“You know, Benny, smoke can be even more dangerous than fire,” Grandfather explained. “It keeps you from getting the oxygen you need to breathe. That’s why firefighters wear those masks.”

Steve put a mask on to show the children.

“You look scary in that,” said Violet. “Like a giant bug!”

“Or a creature from outer space,” added Benny.

Steve removed the mask. “Sometimes at a fire, kids are afraid when they see us in all this gear. Then they run away when we’re trying to help them.”

Steve looked around at the children. “Would you all like to try on some real firefighters’ gear?”

“Sure!” they said in unison.

Steve found four sets of jackets and pants and boots. With help from Grandfather, the children put them on.

“I can barely move, this stuff is so heavy,” said Benny.

“It’s made of special fireproof materials,” Steve said. “Imagine wearing all that and running up stairs carrying heavy hoses!” He laughed.

Then Steve handed each of them a hat. “Do you know why the hats are shaped like that?”

The children shook their heads.

“It protects your head, and also allows the water from the hoses to run down the back, instead of into your eyes,” Steve explained.

Wearing the gear, the children ran around the garage, pretending to fight a fire.

“I’ve got the fire hose,” cried Benny, holding an imaginary length of hose.

“I’m going up to the top floor,” called Violet, pretending to climb a ladder.

A few minutes later they saw the fire trucks returning. Everyone moved back against the side of the garage, out of the way.

Grandfather looked at his watch. “They weren’t gone very long,” he commented.

When the firefighter driving the pumper had gotten out and replaced her gear, Steve motioned to her to come over. “What happened, Christine?” he asked.

“Another false alarm,” she responded. Then she looked at the children, still dressed in their big pants, coats, and hats. “But if it had been a real fire, we would have called you all to help!” She grinned.