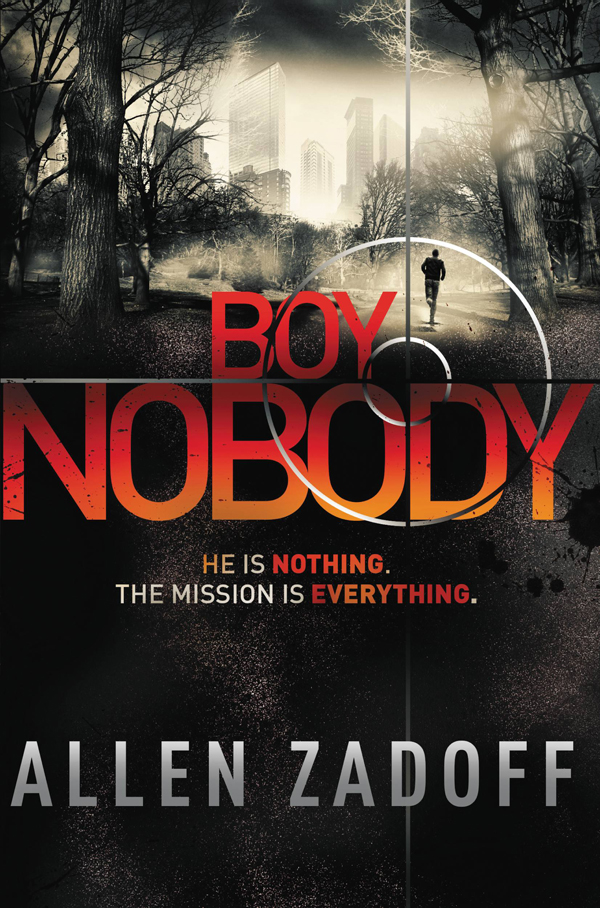 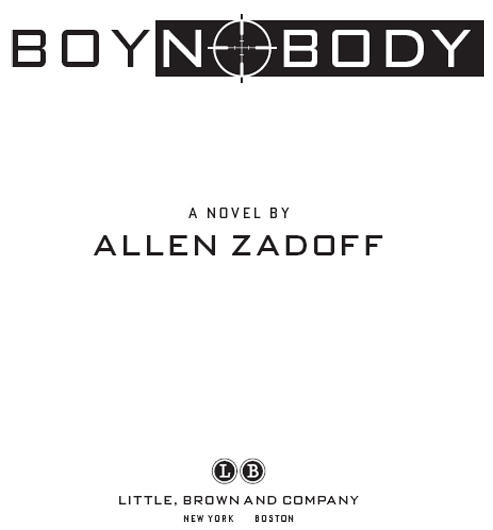 CHAPTER ONE
I PICK UP A BASEBALL BAT.

It’s a thirty-two-ounce Rawlings composite. I feel the weight in my hands. The balance is slightly off from a dent on the tip.

I grasp the bat on either end and stretch out in the parking lot after the game. Natick vs. Wellesley. My Natick teammates are all around me, high school jocks doing what they do after a win. Celebrating. Big-time.

This is what I think to myself:

I smile and stretch.

After a moment, I shift my weight onto my back leg and I swing hard. Jack Wu comes up behind me at the same time. The bat misses his head by an inch.

A big man in a black suit tenses nearby. Tenses but doesn’t interfere.

This is Jack’s bodyguard and driver, a shadow behind Jack whenever he goes out. Jack’s dad is rich. Rich and nervous.

Jack hates the bodyguard. He’s told me a dozen times. Jack and I are friends, so he tells me these things.

“Watch it with the bat, dude,” Jack says, and he punches me on the shoulder. A playful punch.

The Suit steps forward, and Jack spins around, anticipating him.

The Suit grins like he’s in on the joke, but I wonder if he wouldn’t slap the hell out of Jack if he had the chance. Instead he leans back against the sleek black Mercedes and waits.

“You killed it out there,” Jack says. He head-gestures toward the field.

“Your best kicks ass and takes names,” Jack says, and he punches my shoulder again.

This time the big man doesn’t move. But the other players are looking at us.

Two punches on the arm. A way of asserting dominance.

Dominance is a threat. It must be dealt with.

I run a checklist in my mind:

I can let him punch me. Choose a lower status.

I can retaliate in equal measure, with equal force.

I can escalate. Assert my dominance.

Which should I choose?

Jack is supposed to be my friend. A teenage friend would punch a buddy the way he punched me. When in doubt, emulate. That’s what I’ve been taught.

I give Jack a light punch on the shoulder.

This entire transaction takes no more than two seconds:

I swing the bat.

Jack punches. I punch back.

We both laugh as the Suit looks on.

This is what you’d see if you were watching us now. Two jocks, buddies, teasing each other.

“You want to come back to the bank vault?” Jack says.

The bank vault. That’s what Jack calls his house.

Jack steps toward the car. The Suit reacts quickly, opening the back door for him.

“My friend is coming with,” Jack says to him.

“Yes, sir,” he says, and he gestures for me to get into the car.

CHAPTER TWO
THE LEATHER IS SOFT IN THE MERCEDES.

It’s the kind of leather seat that pulls you in, begs you to relax against it. A seat that says,
You are being taken care of. You are being driven where you need to go
.

But this is not something I should be thinking about now. Not when there’s work to do.

I glance at Jack. He’s leaning back with his eyes closed.

He smiles, his eyes still closed.

“I was thinking about you and me.”

“Stop right there,” I say. “You’re making me nervous.”

“Can I be serious for a minute?” Jack says.

“You want to get all heavy for sixty seconds, I’m not going to stop you.”

“I was thinking that you’re a real friend.”

“Not guys I invite over to the house. Not guys I trust.”

The Suit in the front seat coughs. A warning to Jack? A reminder that he’s still here? Or nothing at all. A tickle in the throat.

“If you trust me, can I borrow a hundred bucks?” I say.

“I don’t trust you that much,” Jack says.

He punches my arm.

CHAPTER THREE
THE SUIT TYPES A CODE INTO THE SECURITY GATE.

We pull up to the hut and the Suit nods to a guard. He lifts two fingers. Two people coming in, Jack and me. The guard marks it down on a clipboard. He’s seen me before, and it’s not a big deal.

We continue around a hairpin turn, and the house comes into view. Big but not lavish. The Suit stops to let us out.

Jack types a code to gain access to the house.

The front door beeps to announce our entry.
Front door open
, it says.

It beeps again when the door is closed.
Front door closed
, the electronic voice says.

Jack’s dad wanders by with a beer in his hand. Chen Wu is his
name. His friends call him John. He’s the CEO of a high-tech firm along Route 128. Lots of government contracts.

Does he need all this security?

It’s not just Mr. Wu. All the CEOs are edgy right now. There was some violence a year ago. An important kid got shot during an attempted kidnapping while on spring break in Mexico. The Fortune 500 went security crazy. Now rich kids like Jack need a commando team to take a dump.

He turns to leave.

“Gotta call my mom,” I say. “I guess it’s morning wherever she is.”

He shoots up the stairs.

“You have time for a cold one?” Jack’s dad says.

“Amazing,” I say. “You should come sometime.”

“High school ball is not really my thing,” he says.

But it’s his son’s thing, so what does it matter?

I see this a lot with the Fortune 500. Mr. Wu is always working. Except Friday nights. His only downtime, and he doesn’t want to spend it with his family. He relaxes for the evening, then works again all weekend.

We head into the kitchen, and the conversation drifts to the Red Sox. We’re near Boston, so we have to talk Sox.

I notice an expensive knife block on the counter with one of the knives missing from its slot. A wide slot. This is a knife big enough to be used as a weapon.

I scan the room.

The knife is sitting on a cutting board next to the sink, ten feet away from us. A safe distance away.

I relax and exhale. I sit at the table, and I reach into my backpack and take out a ballpoint pen.

Jack’s dad looks at me from the refrigerator, a question on his face.

“When you talk baseball, I listen,” I say.

When in doubt, emulate.

I turn the cap until it clicks, exposing the point.

Jack’s dad reaches forward to hand me the cold soda.

I push the end of the pen into the meat of his forearm. The action depresses a miniature plunger.

His eyes widen as the drug hits him. His mouth puckers, forming the familiar
Wh—.

Maybe it’s
what
, as in
What are you doing?

But the drug is fast-acting. Its actual speed depends on age and conditioning, which is bad news for Jack’s dad.

He’s out of shape.

So it is fast. Faster even than a word can form.

Jack’s dad stumbles, and I catch him, place him on the floor by the kitchen table. I don’t let him fall, because I don’t want Jack running downstairs to see what caused the noise. I don’t want anyone else rushing in. Not yet.

Six seconds to lay him down, arranging the body, limbs splayed as if from a fall. I use an elbow to knock over the can of beer next to him. The foam hisses.

Five seconds to put away my pen and notebook, zip the backpack where it hangs from the back of a chair.

Four more seconds to play out the chain, let the chemical reaction in Mr. Wu’s body take him beyond the point of resuscitation.

I look at the body. The man who was Chen Wu is gone.

A husband is gone.

A father is gone.

That was your mistake
, I think.

Twenty seconds have passed. The outside edge of my operational window.

I fling open the front door. “Someone!” I shout.

Jack comes running down the stairs, and his face turns white with shock. A sound comes out of him, something between a moan and a scream.

The security people rush in. One look at the body and the first guy knows.

It’s all a show after that.

I stand to the side and watch it happen.

Resuscitation attempts, the ambulance, all of it.

I push forward like I want to be in the middle of the action, be near my friend Jack. The Suit from the baseball game stops me.

He puts an arm on my shoulder, gently, like he’s my father or something. I want to shrug it off, but I don’t.

“Maybe it would be better if you stepped away,” he says.

I relax my shoulders beneath his arm.

He steps into the fray, grabs my backpack, hands it to me, and guides me out the door.

One With the Darkness by Susan Squires
Not Quite Forever (Not Quite series) by Bybee, Catherine
NoRegretsColeNC by Christina Cole
Sword for His Lady by Mary Wine
The Devil's Banker by Christopher Reich
CLAIMED BY A HIGHLANDER (THE DOUGLAS LEGACY Book 2) by Margaret Mallory
The Bones by Seth Greenland
Diary of a Wimpy Vampire by Tim Collins
Wilderness (Arbogast trilogy) by Campbell Hart
Packing For Mars by Roach, Mary
Our partner