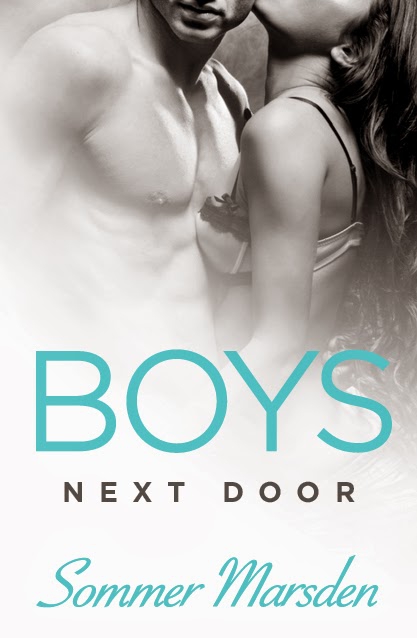 It’s hard for a man to argue with you when his mouth is settled on your pussy. I was no fool and knew it to be fact, so I made sure to keep mine pressed tight to Todd’s magical mouth as he kneeled before me.

‘Right there,’ I said as he swept his tongue almost shyly, but with the perfect amount of pressure, over my clitoris. ‘Right. Fucking.
There
.’ I fisted my hands in his dark-brown hair, my purple fingernails winking in the low light through his chocolaty strands.

‘Not too hard,’ he hissed and the vibration shot through me.

‘You love it, you bitch,’ I laughed, tugging.

He grinned, working his wicked tongue along my outer lips. ‘Shut up,’ he said. Because I was right.

His thick fingers, fingers that worked to build decks and driveways all day long, plunged into me. The sudden burst of pressure and fullness pushed me one inch closer to coming, but I gritted my teeth and pushed my sex closer to his eager tongue. The ridge of his teeth pressed into my mound and he laughed a little.

‘You’re such a slut, Far –’ Todd managed right before I thrust against his too-talkative lips.

He sucked me in then, hard and fast, and that feeling of being drawn on brought me down to a sigh. So good. So fucking good. For all of his childish and somewhat bitchy ways he was a good lover. And that, I would miss.

His fingers drove into me, curling against my G-spot and my hips took up their own little tempo of thrusting. A rogue manoeuvre: about as controllable as breathing. I gasped, tugged his locks tighter so he winced and he pulled his fingers free of me. My punishment. Emptiness.

‘Oh, Todd, don’t cheat,’ I cooed, a little steel in my voice. Another sharp tug and he slid one of his slick fingers into my ass. One hard thrust and I shut up.

‘I’m not cheating, Far, just giving a good little slut what she likes.’

I moaned before I could catch myself. His finger probing me so deeply in my back hole that I felt the nudge against my G-spot, being attacked from an entirely new angle. He shoved me back so my feet left the ground and I was forced to drop to the bed.

The tables were turning. My pussy became wetter with the thought, my stomach going light, like in free fall.

Todd clamped his mouth back on me and suckled. His tongue a swatch of wet velvet against my already hot skin. ‘The trick to my girl is to get her so worked up she’s mindless,’ he whispered.

‘And when she’s so worked up she’s mindless. When she’s so unbelievably fucking turned on. When she is juicy and slippery and ready for anything, you give her that one sweet brutal orgasm and then …’

‘Then?’ I managed to say, my voice almost guttural with arousal.

‘Then you fuck her up that sweet little ass.’

There was a snap of latex and he pushed my legs high, pinning my arms down at my side with manacles formed of his own strong hands. Todd drove into me, my pussy already clenching tight around him from the dirty talk. He was going to do everything he’d said. My hair whispered against the bedding, telling me secrets as I struggled not to come too soon.

Todd moved one hand down and found my clit with his thumb, his eyes staying on my face, reading me as he fucked me. When I bit my bottom lip he pushed with his thumb and the pressure seized me. ‘Come for me, Farrell, because then I can flip you over and do what I want.’

His eyes, heavy with leftover anger, never wavered as he continued to press my right wrist down hard and thrust deep. When he leaned over, licking a wet line along my clavicle I shivered. When he found me with his teeth and bit me, I tried to hold off. I tried really fucking hard not to come, but he bit me again and I came.

Todd pushed into me, rotating his lean hips so that he drew every drop of pleasure from me. He found a way to twist and nudge deeper; I came again and said his name.

‘See, why would you want to leave a man who makes you say his name?’ he said with a chuckle, but I heard the pain under the joke.

‘Twenty-eight years old was the plan.’ I whispered it. We were back to this.

‘So what? Things change. Maybe age twenty-eight isn’t what you thought. Maybe you’re happier than you anticipated. If not now … Soon.’ He sounded angry. And needy. But he never stopped moving in me.

I shook my head. The man wasn’t going to hear me no matter what. ‘Nope. I’m not any of those things. So twenty-eight it is going to stay. My dad bought me that house before he died and I’ve let it sit. Now it’s time to take it. The way I promised myself I would.’

‘Farrell,’ he growled – ready to fight, even mid-fuck.

I shook my head and didn’t speak. He watched me, waiting for me to say something – anything.

‘Turn me over,’ I whispered.

Todd grunted, knowing my tactic but powerless to say no. He pulled free and flipped me onto my belly so the air whooshed out of me in a long lazy sigh. I moved up onto my knees but kept my upper body flat. He liked it that way. Seeing me prone before him. It turned him on no end.

‘Fuck, Farrell. Don’t go,’ he said. His cock nudged the tender ring of my anus and I had to focus on relaxing. That first sharp bite-pinch of penetration in the ass is something I both look forward to and fear. A paradox of sex that never fails to stun me.

I pushed back to greet him, trying to open myself to his intrusion. The entire room smelled of the beach suddenly and I couldn’t help but fight a smile. He’d backed off from me and then the gentle press of his fingertip to my ass made me chuckle.

‘Are we on vacation?’ I teased.

His finger delved into me and when I moaned and pushed back for more he added a second.

‘Nice,’ I whispered, because I couldn’t help myself.

‘You were a little tight.’

He fucked me with oiled fingers and when he was able to add a third, I was on the verge of touching myself to come. The pressure in my bottom making the dull thump of arousal in my cunt almost unbearable.

‘There’s my girl,’ he growled and then the head of his cock, latex sheathed and warm as sunshine, pressed to my anus.

I didn’t have time to react, he drove into me swiftly and I groaned – part pleasure, part pain until it all quickly bled into fierce sweetness. He was in and he was moving, and my fingers found my clit and started slippery revolutions, desperate for release.

I felt him lean away from me a bit even as he thrust. The nightstand drawer clacked and though I couldn’t see him, I knew what he was doing. The scent of coconut grew sharper and the cool kiss of glass shivered over my slit.

‘No,’ I said. But even in the
no
you could hear the
yes
. I could hear it and I knew Todd could too. The need in my voice was thick and almost shameful, making me quiver and my nipples peak.

All my wires crossed, all my nerves blinking with confusion and arousal and want. I rubbed a few more hard and slick circles over my swollen clit and came, yelling out into the mattress. The thick bedding muffled my cries but freed me to be as loud as I needed.

And that was loud.

Until the last utterance. Then I was able to make his words out.

‘Are you sure you need to go?’ he grunted.

I let him finish. Let him pull from my body and lay a kiss on my lower back. When he rolled to his side and pulled me down with him, I answered him.

Tower Terrace was a sleepy town personified. From the main road the tower was visible and it made me shake my head. Who builds a tower in a tiny little town? The answer is Maxwell Shore. That’s who.

The resident eccentric had built it for his one true love. At least that’s what his will had stated. However, no one had known that fact until he’d died and the will was read. The town had originally been called Maple Terrace but when Maxwell left the town a large sum of money for the tower’s upkeep – providing they changed the name to Tower Terrace – the name changing ceremony was performed, the switch made legal and the entire town had held a huge festival. A huge
drunken
festival from what my dad had told me; his friend Sidney having told him.

The tower overlooked the plot of land occupied by my brand-new home. A small cottage with two bedrooms, one-and-a-half baths, a converted closet serving as the small half-bath on the first floor. The living room and dining room were a combo deal dominated by a large fireplace. The kitchen was a small town wet dream with a centre island, stainless steel appliances, a pot rack hung over the isle with brass and old-fashioned pots hanging like fat plump metal berries. Sidney had at one point built a small wood burning stove on the outer wall.

Pizza was his life not his hobby, my dad had once told me. Apparently, brick oven pizza.

I couldn’t wait to get inside and get my hands on something to bake. I was a closet Martha Stewart and the thought of making some biscotti or even frou-frou cupcakes in that kitchen gave me a baker’s hard on.

I piloted my small piece of crap car down Lady Bug Lane. No lie – that was the name – and aimed it at my cottage which I’d only visited twice before. Once when my father was considering buying it. And then when he did buy it.

‘But you refused to leave the city until you were twenty-eight,’ I said to myself. There was mild self-annoyance in my tone. ‘And
still
not a famous actress.’

My last role had been for a douche ad. Something I found hysterical as most doctors currently recommended against douching and had since the Stone Age. I’d almost turned it down but had finally taken it because bartending at the
One Eyed Crow
hadn’t really left me rolling in dough.

Now I had a house and all I needed to do was find a job before the money that came with the house ran out.

My father hadn’t been loaded but he’d told me that when I took possession of the house there would be a small amount of money attached. ‘To live on. While you find a job,’ he had said.

I guess he’d known I’d end up here after all. And even though, on some level, it hurt that he’d anticipated my apparent failure, I was grateful for what he’d done for me. Maybe he hadn’t anticipated failure; maybe he’d anticipated realisation of self. A need to be more. To do more. And that was what I’d do. I’d fit in, make do and get my shit together before that stipend ran out.