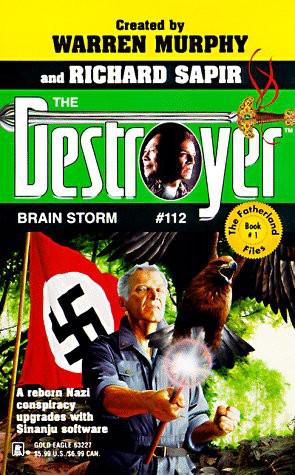 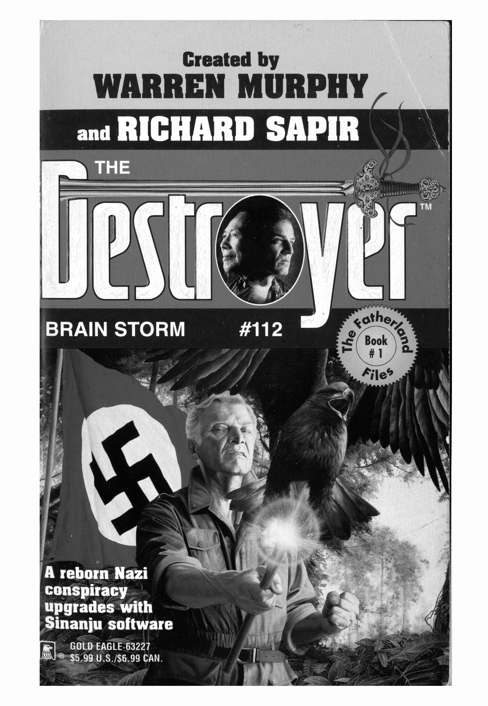 "Is there something wrong with the
Master of Sinanju?" he asked.

"Nothing wrong. He just wanted to ask you
for something."

"Oh, it is," Remo said. "Chiun wants to know if
he can have your autograph."

"He thinks since you've been on the news you're
going to break into the big time. He wants to get
your signature first. Especially since he heard
that a lot of autographs fetch big bucks."

"How you like to apply your base motivations to
another," squeaked Chiun.

"So, you willing to do it or what?" Remo spoke to
Smith.

"Don't forget us little people when you're a star."

Other titles in this series:

A GOLD EAGLE BOOK FROM

Special thanks and acknowledgment to James Mullaney and Daisy Snaggers for their contribution to this work.

All rights reserved. Except for use in any review, the reproduction or utilization of this work in whole or in part in any form by any electronic, mechanical or other means, now known or hereafter invented, including xerography, photocopying and recording, or in any information storage or retrieval system, is forbidden without the written permission of the publisher, Worldwide Library, 225 Duncan Mill Road, Don Mills, Ontario, Canada M3B 3K9.

® and TM are trademarks of the publisher. Trademarks indicated with ® are registered in the United States Patent and Trademark Office, the Canadian Trade Marks Office and in other countries.

For Mary and Red Power.

And the Glorious House of Sinanju.

The thing that scared Andy Frost most that day was the parking.

The crime rate didn't bother him. Everyone he knew had been mugged at one time or another.

Among New Yorkers, it was sort of a twisted badge of honor. In fact, it wasn't uncommon for people to invent stories of violence for the daily water-cooler competition.

The people themselves didn't frighten him, though the Christmas crowds had a tendency to get on his nerves. Everyone had a touch of agoraphobia at one time or another, but not Gothamites. When you were raised in a ten-story walk-up like a nest of rabbits in a squalid hutch with a hundred other human dregs screaming and pounding through the walls and ceiling and floor all hours of the day and night, you learned to live with overcrowding. You complained about it, sure.

Constantly. But you lived with it.

Yes, the murder rate was high. So what? Everyone died in his or her time. Here people were killed over stuff as trivial as a pair of sneakers or a leather jacket. What, they didn't have murders in Wiscon-sin? Facing down the business end of a gun didn't worry Andy. And it was a trade—a high per capita murder rate in exchange for all-night drugstores, fresh bagels on demand and the chance to see Cats or Evita or a dozen other shows seven nights a week.

The other fearful things of everyday life in the city were too numerous to mention. You had to deal with Con Edison, rabid rats, cockroaches the size of ashtrays, greedy landlords if you weren't lucky enough to benefit from rent control and about a million foreign cabbies who seemed to have learned their driving skills behind the wheel of a Kuwaiti bumper car.

No, none of these things bothered him anymore.

But the one thing that still made Andy Frost shiver and whimper like a rain-drenched fox terrier was the parking in midtown Manhattan.

Parking condensed every fearful element of the city. You got your ticket from an angry foreigner in a tiny booth. You drove into a drafty underground garage that stank of urine and housed more species of wildlife than the Bronx Zoo. Muggers and murderers were likely skulking behind every other parked car.

And at Christmas? Forget it.

You'd be better off leaving your car in the middle of the Triborough Bridge and walking the rest of the way in.

Fortunately for Andy, the holidays were months away and so the crowds of people heading to work were no worse than usual. It was ridiculous, but ne-gotiable, which was good for him since he was already running late.

The parking garage was less than a block away from the bank where he worked, and as he angled down into the musty bowels of Manhattan, Andy took a moment to quietly curse his parents. Not for the first time today, and it surely wouldn't be the last.

They were the reason he had the car. In fact, it was their car.

The biggest, ugliest conglomeration of metal and plastic Detroit could produce, slapped front and back with the telltale orange-and-green Florida license plates. There was no doubt about it—if the Big Three started making cars with shark fins again, Andy's father would be first in line to buy one.

His parents were up on a visit with his mother's sister and they were going to spend the day taking Andy's aunt around town to see all the sites they had neglected to visit during their fifty-odd years of living in the Big Apple. It was an irony he had pointed out at least a hundred times during the past two days.

They had made Andy promise he would pick them up at Rockefeller Center at five-thirty that afternoon—a feat he still had no idea how to accomplish—and his father had dropped the keys to the Buick in his hand as he went out to work that morning. And so here he was, at 9:11 a.m. on a Monday morning, already more than ten minutes late for work, driving down into some subterranean nightmare and not knowing whether or not he was ever going to see a ray of sunlight again.

He did. In record time. Andy was up on the sidewalk and trotting along through the heavy pedestrian traffic three minutes later.

As he jogged along, he continually checked his watch at thirty-second intervals, each time stepping up the pace a little more. Plowing through the chok-ing throng of people, he caught a few angry glares from other pedestrians but in spite of everything that could have gone wrong, he was at the bank by twenty minutes past nine.

In front of the massive building, Andy noticed that the gutter had been marked off with several strate-gically placed orange traffic cones. These were obviously set up to discourage anyone from slowing down or parking in front of the bank's double doors.

The sounds of honking horns and angry shouts were proof that not everyone appreciated their careful placement.

At the center of the arrangement of cones, directly across from the glass foyer doors of the bank, a large white van sat soaking up the few feeble rays of di-luted sunlight that managed to penetrate the smog and towering buildings. The van's engine hummed softly.

As he approached, Andy noted that the cab of the van was empty.

Not a very wise move in New York. It was an open invitation to thieves. As he drew closer, Andy noticed the name PlattDeutsche A.G. stenciled in small black script above the door handle on the passenger's side. That explained it. This was the new security company which for the past few weeks had been installing the bank's new high-tech camera and vault system. Probably the van was wired to explode the minute somebody touched the door handle.

Suddenly the door separating the cab from the rear opened, and Andy got a quick glimpse of a distinctly high-tech environment A brief flash of computer monitors, blinking lights and men in white lab coats moving urgently around the cramped interior showed before the door was closed once more. A young man moved from the rear of the van to settle down in the vacant driver's seat behind the leather-wrapped steering wheel.

The man sported a mane of dirty blond hair swept carefully back onto the broad shoulders of his expensive suit, and when his gaze settled on Andy, the young mortgage officer found himself staring into a pair of the angriest blue eyes he had ever encountered. Looking at them was like peering into the eyes of a feral jaguar.

Andy didn't know what it was with those PlattDeutsche people, but ever since they'd shown up more than a month ago, they'd been giving everyone at the Butler Bank of New York a first-class case of the screaming-meamies.

Andy tore his gaze away from the feral eyes of the young man and hustled through the massive bank doors.

An hour later, Andy had settled down behind his desk on the main bank floor. He was a junior member of the bank's mortgage team, and even though his father referred to him as a 4'glorified teller," he still hoped that one day he would move into the upper offices of the Butler banking empire.

As a junior officer in the banking industry, Andy generally considered his greatest misfortune to be the placement of his work space so close to the bank's main entrance. His proximity to the front door invited gentle queries on every imaginable topic from a wide range of the Butler Bank's many patrons. He felt that his desk was the informal information booth for the whole bank, and though he complained about it many times in the past, his supervisor had so far managed to avoid taking corrective action.

pleted the bulk of his work after a mere forty-five minutes behind his desk and he was intent on frit-tering away the remainder of the day until it was time to retrieve his father's car and battle his way through the insane rush-hour traffic. Most days when Andy goofed off, he had little to occupy his time save the endless shuffle of papers and an occasional trip to the men's room, but today he had a floor show.