Read Break the Sky (Spiral of Bliss Spin Off) Online

Break the Sky (Spiral of Bliss Spin Off) 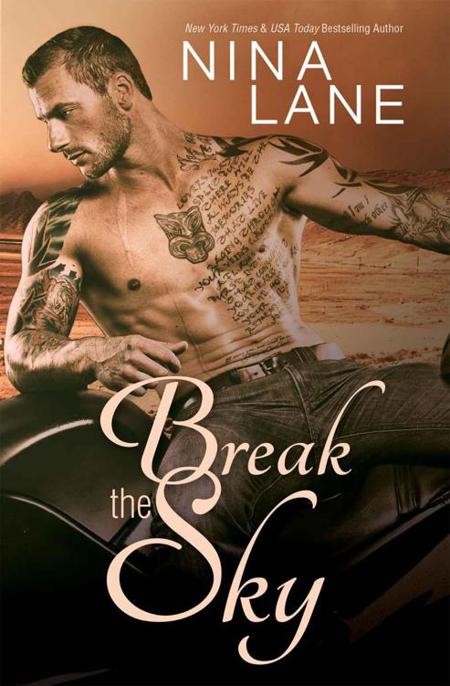 You will hear thunder and remember me, and think,

BREAK THE SKY is a standalone, spin-off novel of the Spiral of Bliss series from
New York Times
and
USA Today
bestselling author Nina Lane.

Atmospheric scientist Kelsey March is under siege. Her tornado research project is on the skids and she’s fighting conflict in her university department. So when irresistible bad boy Archer West suggests a hot, wild fling while he’s in town, Kelsey is unable to resist his sexy offer.

Kelsey and Archer embark on a intense, exhilarating affair. But soon their differences and private battles encroach on their desire, and Kelsey discovers she is caught in a storm she can’t control…

WE CALLED IT THE CASTLE. FIVE
rough, splintery boards nailed to the tree branches and three sheets of plywood stuck to the sides. We hadn’t put on a roof, though, because the leaves of the oak tree made a thick canopy. We both liked the way the sun fell through the branches. If it rained, we put up an old tarp that kept most of the water out.

We’d cut a rectangle in the plywood wall opposite the tree trunk and made a door out of a piece of crate siding and some hinges we’d found in the garage. The door didn’t close all the way because of the heavy rope we used to climb the branches. We pulled the rope up for security when we were both inside. “Raise the drawbridge,” Dean would shout, though sometimes if I went to The Castle by myself, I’d pull the rope up after me so I could be alone.

Sometimes I just didn’t want my brother around. Dean was bigger, older, smarter. I was the runt of the litter—the youngest and the stupidest. I always had trouble in school, couldn’t keep up, was assigned to special ed. Dean did everything so easily, was so much better. It was the reason our parents always paid more attention to him.

But we were equals in The Castle. Sometimes the tree house was a pirate ship, a secret island, a spaceship, the peak of a mountain where the intrepid explorers, the West Brothers, would reach the top, plant a flag, and celebrate their victory by dining on messy sandwiches and chocolate milk.

I didn’t. I still climbed the old oak, pretending I was the lone survivor of a shipwreck, a lost mountaineer, the sole guardian of a fortress under attack. And even though I didn’t always like being around Dean, it was different without him. Harder to battle pirates and fight monsters alone.

When Dean was thirteen, our parents let him buy a Sega Genesis with money he’d earned doing neighborhood yard work. He kept the video-game console in his room and only sometimes let me use it.

One Sunday afternoon, bored and restless with fears of a spelling test the next day looming, I wanted to pretend to be Wolverine taking down Magneto.

“No.” Dean grabbed a soda from the refrigerator and shut the door.

He shrugged and went into the family room. I followed.

I knew he was irritated because of something our father had said to him about his grades, but that had nothing to do with me using the Sega.

His voice was starting to sound deep, like our father’s. I kicked the leg of a chair, my frustration rising.

“Go ahead.” He grabbed the remote and turned on the TV. “It’s mine anyway.”

He shrugged, his gaze on the TV. My frustration exploded into a strangled noise. I kicked the chair again and ran upstairs. Dean’s bedroom door was open.

His stupid soccer trophies lined the bookshelf. Science-fair ribbons hung on the walls under San Francisco Giants pennants and posters of Joe Montana. And there, sitting on his desk like the Holy Grail, was the Sega Genesis.

I didn’t think. I just grabbed it with the intention of locking myself in the basement rec room. I hurried from the bedroom, passing the stair railing that overlooked the entryway.

I stopped. Stared down at the tiled floor. And dropped the game console over the railing to crash on the floor below.

The controllers cracked, the plastic broke. I looked down at the smashed game and wondered why that destructive act had felt so good.

“What the hell are you doing?” Dean ran in from the kitchen.

Startled, I looked at him. I didn’t know if he’d seen what I’d done, but he was furious anyway. Fists clenched at his sides, face red.

I shrugged. “Accident. I tripped and it flew out of my hands.”

“What were you doing with it in the first place?” Dean yelled, coming up the stairs. “I said you couldn’t use it.”

“It was just sitting on your desk,” I snapped back. Even though I knew I was in for it, I was glad that I’d enraged my brother. “Stop being such an asshole.”

Dean shoved me. I stumbled back, my hands flying up in defense. Rage pumped through my blood. I hated that he had a Sega and so many trophies. I hated that girls liked him, teachers favored him, and coaches wanted him on their teams. I hated that he didn’t want to battle pirates with me anymore.

“You’re paying for it,” Dean shouted. “When Mom and Dad find out, they’ll make you pay.”

“I don’t care.” I didn’t, either. It wasn’t like I had the money to pay for anything.

Dean stalked toward me. He was so mad he was shaking. He shoved me again, and this time I let my fist fly in return. My punch caught Dean on the side of the head. In less than a second, Dean tackled me, bringing me down. Even as I hit the floor, I knew I didn’t stand a chance.

I tried, though. I’d been in enough scrapes at school. I knew how to fight dirty. I kicked and hit and yelled, trying to get at my brother’s weak spots, trying to land a punch through Dean’s own flying fists.

“What the hell is going on?” our father’s voice thundered. Dean was yanked off me and flung against the opposite wall. “What’s the matter with you two?”

“It’s his fault,” Dean shouted, swiping at his bloody nose.

I pushed to my feet, feeling a grim satisfaction at the evidence showing I’d landed a direct hit.

“What’s his fault?” our father asked.

I felt the weight of my father’s gaze. I tried not to squirm. Sweat ran down my back.

“How did that happen?” he asked.

“Archer threw it over the railing,” Dean said, still glowering angrily at me. “Stupid idiot.”

New rage filled me. I lunged at Dean, but my father grabbed my arm in an ironclad grip and pulled me to a halt. I tried to get away, but couldn’t. My frustration exploded.

“You’re an asshole,” I yelled at Dean. “You think you’re better than everyone, that you’re so smart when you’re really just a selfish bastard who—”

My father smacked me. Hard. Right across the face. Pain spread over my whole head.

“You’re the bastard, Archer,” Dean snapped. “And stupid too. You didn’t even know that he’s not your real dad.”

He stabbed a finger at our father then turned and ran down the stairs. My sister Paige stood in the kitchen doorway, white with shock. I knew she’d heard everything.

I couldn’t move. The air seemed thick. It was hard to breathe. I was still sweating. My father didn’t say anything at all.

Cold prickled my skin, along with a horrible, sinking feeling of having just been told something that I already knew. My father released my arm. I stared at the floor. I heard his heavy footsteps going down the stairs. The front door slammed.

It took me a long time to move. I went downstairs. The Sega still lay broken on the tiled floor. I walked to the garden and out to the woods. I climbed the rope ladder and crawled into the tree house, breathing in the familiar scents of rotting wood and oak. I pulled the rope up and closed the door. I didn’t leave for a long time.

Everything changed after that. And everything stayed the same.

My mother, upset and weary, told me she’d made a mistake once and none of it was my fault but that I couldn’t tell anyone. It was a secret. She said Richard West was the man raising me and that he
was
my father. My father… well, Richard West, treated me with the same detached attention. Paige pretended nothing had happened… like my world hadn’t shattered.