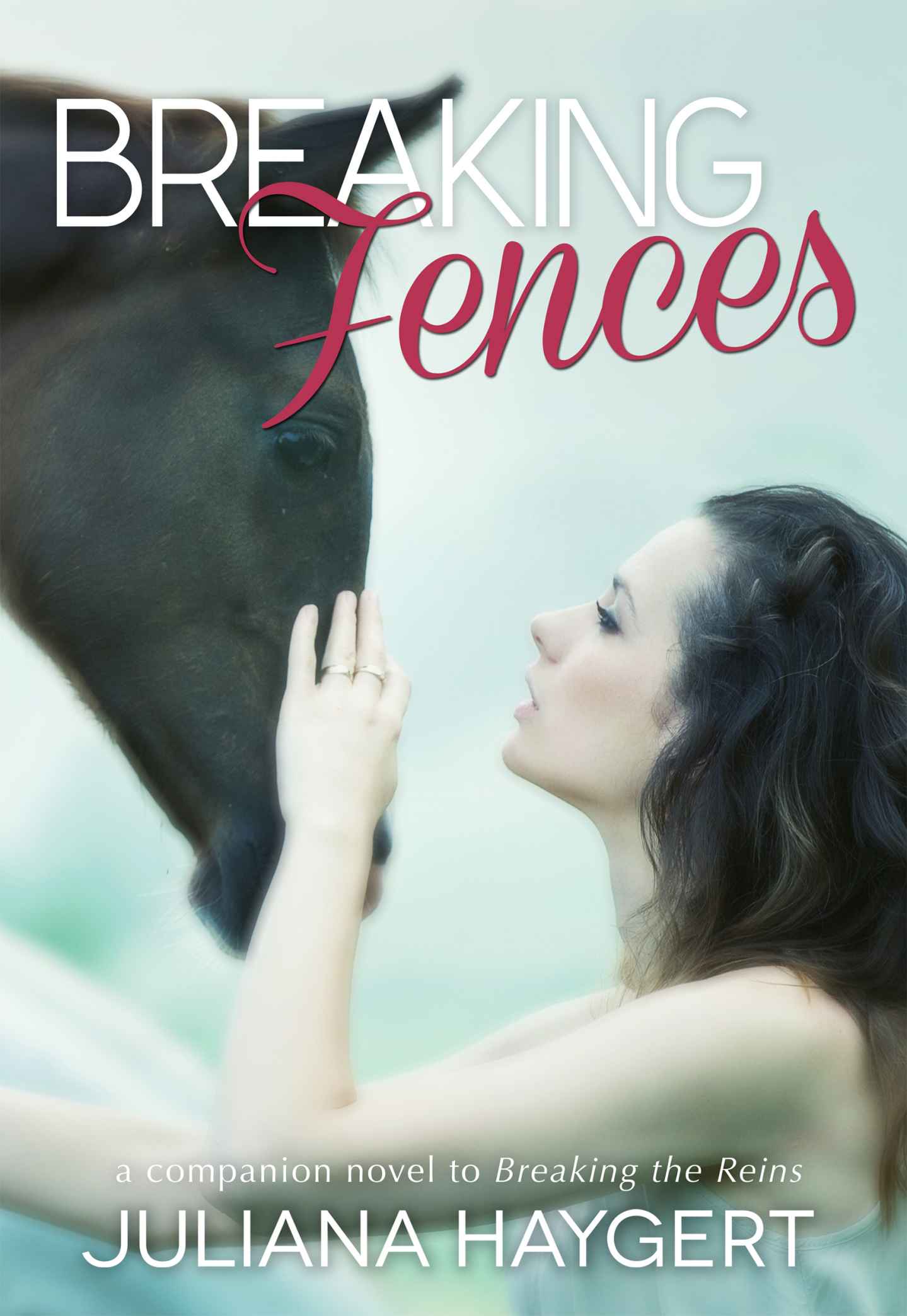 To all readers who asked for more stories in

the Breaking the Reins’ world.

Note that some words and expression don’t have a perfect literal translation. The translation you see here is the one that fits the context of this novel.

Beijinho – a sweet made with condensed sweetened milk

Brigadeiro – a sweet made with condensed sweetened milk and cocoa powder

Carreteiro – dish made with rice and steak

Chato – a call name for someone who annoys you

Feijoada – dish made with black beans

Ga
ú
cho(a) – people born in the South of Brazil

Que porcaria
é
essa – what the hell is this

Tche – common expression used by gaúchos. It can mean many things. A salutation, an exasperated exclamation, or even calling someone

Leaving some things—or people, or horses—behind was harder than I thought it would be.

“
Tá tudo bem
,” I said, patting Preta’s long neck. My beautiful gray mare tilted her head to me and nudged my shoulder with her wet nose. Smiling, I leaned over the stall door and hugged her. “Hannah will take care of you.” In the next stall, Argus nickered. I turned to him. “
Sim
, you better take good of her too.”

“I know he will,” Hannah said, entering her ranch’s stable. She had a sweet smile on her lips, but her dark green eyes looked at me with concern. That was how everyone looked at me lately, and I was getting sick of it. Hannah stopped by my side and watched both horses. “He’s in love.”

I scratched Preta’s wither. “So is she.”

That was the main reason I was leaving my mare here. Because Argus and Preta behaved like an old married couple. Not because my father and I had had the fight of the century two nights ago, and I had left promising never to come back. Not at all.

Hannah leaned on the back wall. “Excited?”

I faced her and rested my butt on the stall’s door, allowing Preta to keep nuzzling my back. I needed my mare’s comforting and supporting touch right now.

My entire life, I did whatever was good for my brothers’ and cousin’s polo career. Dropping out of vet school and following them from Brazil to the U.S. a little over a year ago had been the culminating point. We had always traveled all over the world for tournaments and contracts, but we had never talked about moving. Much less to another country.

At first, it was like a new, fun adventure. So much to see, so much to explore. However, after a couple of months, I grew tired of it. All I did was follow them to the club for training, then back home. Even riding by myself, without a time frame or obligations, had been hard to squeeze in with their busy calendar.

I loved my family with every drop of my blood, but I wasn’t the type to sit pretty and smile. I would rather run around, muck out a stall or two, get my hands dirty, and feel useful.

My patience had a limit, and I had reached it a long time ago.

She nodded. “I know. You’ll be fine, though. You’re smart and pretty. Girls will want to know all your secrets and boys will fall head over heels for you.”

“Boys? Who’s talking about boys?” Leo strolled in the stable. As usual, my twin brother wore jeans and no shirt.

Hannah laughed. Of course, she was laughing. He was her boyfriend. She probably enjoyed staring at his chest. I didn’t.

“Don’t change the subject,
senhorita
.” Leo halted beside Hannah and put his arm around her shoulders, pulling her close. Most of the time, it was cute to see how much they loved each other. But sometimes, it was sickening. Didn’t they get tired of being together all the time? “I’ll punch any boy who looks at you the wrong way.”

I rolled my eyes. “Leo, we just turned twenty-two. I don’t need your protection anymore.”

He shrugged. “You’ll be fifty and I’ll still be watching over you.”

His happy demeanor fell through, and a knot appeared between his brows. “Too many miles away.”

And I couldn’t wait for it.

I whirled around and patted Argus’s neck then kissed Preta’s forehead. “Be a good girl, okay.” I inhaled a deep breath and put on a smile before facing my brother and his girlfriend. “I should get going.” After all, I had to drive seventeen hours to get to Colorado.

Without waiting for an answer, I marched out of the stables to the parking lot beside the main house, hearing Leo’s and Hannah’s footsteps as they followed me.

After I told him of my plans a month ago, Leo decided I shouldn’t leave without a car. He said it would be helpful to have my own set of wheels wherever I went, so he gave me a brand new red Grand Cherokee for our birthday. I wanted another SUV, but since Jeep was his sponsor, I had no say in it. Besides, I hadn’t set up my own bank account here in the U.S. since we moved. At the time, it didn’t seem like a big thing, since I had debit and credit cards from my parents’ account and I didn’t need to ask permission to buy anything. That changed after my fight with my father. Now, I didn’t feel like taking his money for anything, and I depended on Leo’s bank account. He insisted he didn’t mind, but I did.

I opened the driver’s door and stared inside for a moment. I had jammed everything I owned in there, everything I had brought from Brazil and bought here since. It didn’t look like much, but the car was about to explode clothes and boots and cowboy hats everywhere.

Sighing, I faced Leo and Hannah. “Thanks. For everything.”

Hannah pulled me into a hug. “Drive safe. Call us every time you stop to eat or rest. And call us when you get there. Take care. Have fun. And—”

“Okay, Mom,” I teased, breaking the hug. Leo opened his arms and I wrinkled my nose. “I’m not hugging you. Put on a T-shirt first, then we can talk about it.”

Ignoring me, he wound his arms around me. “Come here.” I squirmed, which made him squeeze me tighter. “Everything Hannah said, okay? Be a good girl.”

I stepped back and shook my head at him. “I’m always a good girl.” He snorted, but I decided this wasn’t the time to start an argument. I slipped inside my SUV and looked at them. “I’ll see you soon.”

I turned on the engine, closed the door, put on my seat belt, and tuned the radio to a loud country song before driving out of the parking lot, off the ranch, and taking the first step into my new life.

The University of Fort Howell, located in the tiny town of Fort Howell, Colorado, just east of Aurora, buzzed with life. Classes started Wednesday, but today the dorms and the registrar office opened, allowing students to get ready and acquainted with the campus, and with new friends.

As I drove through the streets, students walked up and down, carrying boxes, bags, sofas, mattresses. Parents took pictures instead of helping. Cars were parked in non-parking spaces, or were doubled parked. There were smiles and tears everywhere.

After driving seventeen hours, not counting my stops and the nap I took at a rest area during the night, I was so tired that I didn’t think I would feel anything once I got here.
Tche
, I was wrong.