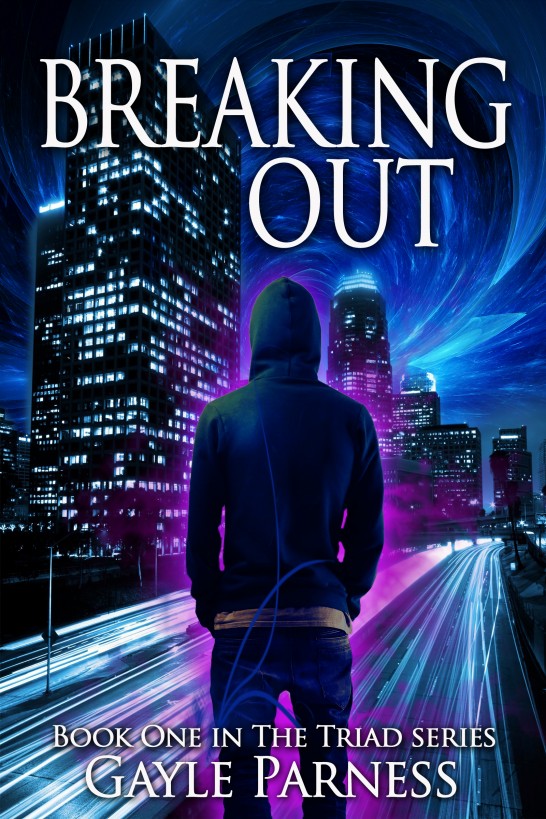 Dedicated to the wonderful readers willing to
accompany me on a

different kind of journey. Thank you.

This is a work of fiction. The names of all
fae, demons, werewolves, shapeshifters, vampires, humans or other
species mentioned in this book are a product of my imagination. So
please don’t call your Master Vampire or your Pack Alpha and tell
him I’m causing trouble. I’m not.

Plus I don’t heal as fast as they do.

One more thing:
Breaking
Out
is the first book in the Triad Series. If you haven’t read
the Rogues Shifter Series ebooks, the lead character in this book,
Charlie, is a spoiler unto himself. You don’t need to read the
other books to enjoy this one, but if you read this one and then
decide to read the other series…oh well. You have now been
officially warned. :0)

Other Books by Gayle
Parness

I pulled the sleeping bag and fully loaded
backpack off the floor of my closet and yanked my leather jacket
off the hook. This was it and I was ready.

For six months—
six months
—we'd been
preparing for this trip, reading backpacker blogs and studying maps
of the Sierras and the California coastline. Jay and I’d spent
dozens of late-night hours in the back booths of the Gasquet Deli,
arguing over details.

All this time we thought we’d been keepin’
our game plans under the radar, 007-style. Once a week I’d sneak
out of my house at midnight, Jay telling me to wear black and act
“normal”—whatever that was for someone like me: a total freak of
nature. I’d usually show up a couple of minutes early via the ley
lines, a mode of travel only available to supernaturals with demon
or fae blood. It was like teleporting, only you were moving through
magical energy to get where you wanted to go, not quantum energy
like in the movies.

Jay would arrive on his bike, a sweet machine
rebuilt by a local leopard Jay met at a motorcycle show in Oakland.
He’d hide it a quarter mile from our meeting place so the people in
town wouldn’t be disturbed by the loud noise of the engine at 1:00
am. Then he’d jog the rest of the way.

‘Course there we were, a couple of young guys
hanging out in a well-lit, all-night diner in a territory where
supernaturals had settled by the thousands. Even with hats and
hoods we must’ve been easy to sniff out—it was a pretty small
town—and the random shifter or werewolf in the next booth could’ve
overheard our sometimes-heated discussions. I’d mentioned that fact
to Jay, suggesting more secluded locales, but he shrugged it off. I
think he wasn’t willing to give up his midnight snack: a heaping
plate of his favorite burgers. Typical bear.

I re-read the beginning of dad’s note,
smiling as I stuck it in one of my pack’s zippered
compartments.

Kyle, Peter, and I know what you and Jay
have planned. Children love to imagine they're smarter than their
parents, but you two sometimes forget you're surrounded by
creatures with supernatural senses and hundreds of years of
experience. C'mon, give us some credit.

Yep, we’d been busted big time by not only
my
dad, but also Jay’s. To be honest, I was relieved I’d
gotten the okay from at least one of my parents, although I'd much
rather have been up front about the whole thing from the start. In
the note Dad laid down some rules, but I was cool with those
because he’d made it clear he trusted me to be smart enough to keep
my head and not get into trouble.

My brows collided as I stuffed in another
sweatshirt, using more force than was absolutely necessary. Mom
expected me to stick close to home all the time, even now that I
was an adult. She'd managed to forget the fact that at seventeen
she’d been mated to Dad, stepping into dangerous situations on a
weekly basis. She'd even fought a duel with a three hundred year
old vampire, turning him to ash in front of his even older
maker.

Now I was seventeen and ready to do my part,
but that fact didn’t seem to penetrate her over-protective mind. If
I’d told her my plans, she would’ve done everything in her power to
keep me right here, including calling in Aedus, the newest Cascade
Fae Elder. He and Mom might’ve decided to toss my butt into
Faerie—for my
protection
. Dad might have spoken up for me,
but it would’ve caused an all-out family battle and in the end he
would’ve backed Mom.

I didn’t have the stomach for that kind of
scene. My birth had caused everybody enough stress.

Lucky for me, Mom and Dad were spending a few
nights in San Francisco. They hardly ever took time off to be
alone, so I’m sure she jumped at the chance when he suggested it.
Man, I wouldn’t want to be in his shoes when she finds out I’ve
gone. I hope he doesn’t tell her until they get back home, ‘cause
he’ll probably be sleeping in a guest room for the next month.

Although what went down was bad, the timing
of the huge fiasco at the Faerie Court with the former queen,
Fionna, and her dad, King Finvarra, turned out to suit me
perfectly. For once in my life I wasn't being guarded, since all my
regular watchers were needed at court. As Isaiah would say, an
unexpected opportunity should never be wasted.

As I strapped the sleeping bag to the
backpack, I grunted in frustration. Cutting out in this sneaky way
meant I wouldn't have a chance to say goodbye to my friends. I
imagined that Linn would be sad, then furious. She was my best
friend in Faerie, although she’d always seemed to want more than
friendship. Grady, Liam’s adopted son would look at the situation
logically and then be angry that he hadn’t had a chance to ask me
to interview any fae that I might happen to meet during my trip.
He’d taken a consuming interest in the history of the fae and more
recently, the demonic races.

I ran a tense hand through my hair. When they
find out what I’ve done, Liam, Sasha and Rick will want to hang me
up by my balls for hurting Mom. I winced, thinking I might have to
extend my trip a little longer than I’d planned just so they’d have
a chance to calm down. If Isaiah, my demonic great-uncle and
sometimes trainer, were here, he’d probably punch me in the
shoulder and wish me luck. My shoulder would hurt for a week, but
it was his way of showing he was proud of me.

And Mom, well, she’ll be hurt and angry, but
that was nothing new where I was concerned. We’d argued a lot over
the last year, mostly over me having a life.

I pushed the hair out of my face and looked
in the mirror. I looked like him, Lord Kennet, my birth father,
especially now that I was full-grown. Same light hair. Same eyes.
My mouth and nose were more like Mom’s, but there was enough of a
resemblance to be a constant reminder of the fae who’d raped and
beaten her and gotten her pregnant. Sometimes I’d catch her staring
at me when she didn’t think I was looking. It was worry I saw in
her expression: worry that I wouldn’t be able to control my magic,
or worse, that I’d turn out to be a monster like him.

We never talked about it. Neither of us could
seem to find the courage to bring it up. And so the moat grew
wider, frustrating us, separating us, dividing us.

I took care of a few things in the bathroom,
splashing water on my face to get my thoughts back in gear. My
decision had been made. Continuing to live my life in this
comfortable prison was no longer an option for me.

Using a skill I’d learned from Isaiah, I
morphed my blonde hair to reddish brown and my purple eyes to dark
blue. Taking a look at my profile, I lengthened my nose, forming a
small bump as if it’d been broken in a fight, changing my scent
from cheetah to leopard, leaving the rest of my body pretty much
the same. Jay was good-looking in that all-American kind of way
that a lot of girls went for. No one would be noticing me and that
was just the way I wanted it.

Huffing out an excited burst of air, I
adjusted the straps, threading them over my shoulders to recheck
the balance. So this was it. I was officially done with this whole
"Savior of the Supernatural World" cloud I'd lived under for
seventeen years. The thought had me grinning for the first time
today.

There was a whining sound outside my door. I
opened it and in trotted my Rottweiler. He sniffed around and
licked my hand. “Hey, Samson. You know I’m going, right? I’m sorry,
I can’t take you with me, boy.”

I almost fell on the floor in shock when he
growled at me. Samson had been my best bud my whole life. He’d
never growled at me, not once. What was up? Was he sick or
something?

I sensed her even before I smelled her
familiar floral scent. It usually made me smile to see her, but
today? Not so much. "I was wondering when you'd show, Sinlae.”
There was no way she’d allow me to sneak away without saying
goodbye.

She didn’t waste time before dishing out
orders. “You must take Samson. He is your cu sith.” The dog in
question began furiously wagging his tail, his growling having
stopped the minute he saw the tiny pixie materialize over my
dresser.

“No, he’s my mom’s.” A cu sith was a faerie
dog who protected a particular person. They lived longer than a
normal canine and were magically gifted with better fighting skills
and more acute senses. He’d saved my mom’s life a couple of times
and had been a part of the Wild Hunt that went after Lord
Kennet.

“He is yours now.” When I grunted in
disagreement she slapped her hand on the desk like I was five
again. “I am certain. Your mother no longer has need of him now
that Lord Snakeskin is gone. Both of your parents will feel more
confident about your journey if you are well protected.”

I almost laughed out loud, deciding at the
last second to zip my trap. Sinlae would scold me if she thought I
wasn’t taking her advice seriously, even though her nickname for
Kennet always cracked me up.

Mulled Murder (Pennyfoot Holiday Mysteries) by Kingsbury, Kate
The Detective and Mr. Dickens by William J Palmer
Scratch Monkey by Charles Stross
Dangerous by D.L. Jackson
Into a Dark Realm by Raymond E. Feist
Danger in Paradise by Katie Reus
The Road to Price by Justine Elvira
Sure and Certain Death by Barbara Nadel
The Husband List -2 by Victoria Alexander
Crouching Buzzard, Leaping Loon by Donna Andrews
Our partner