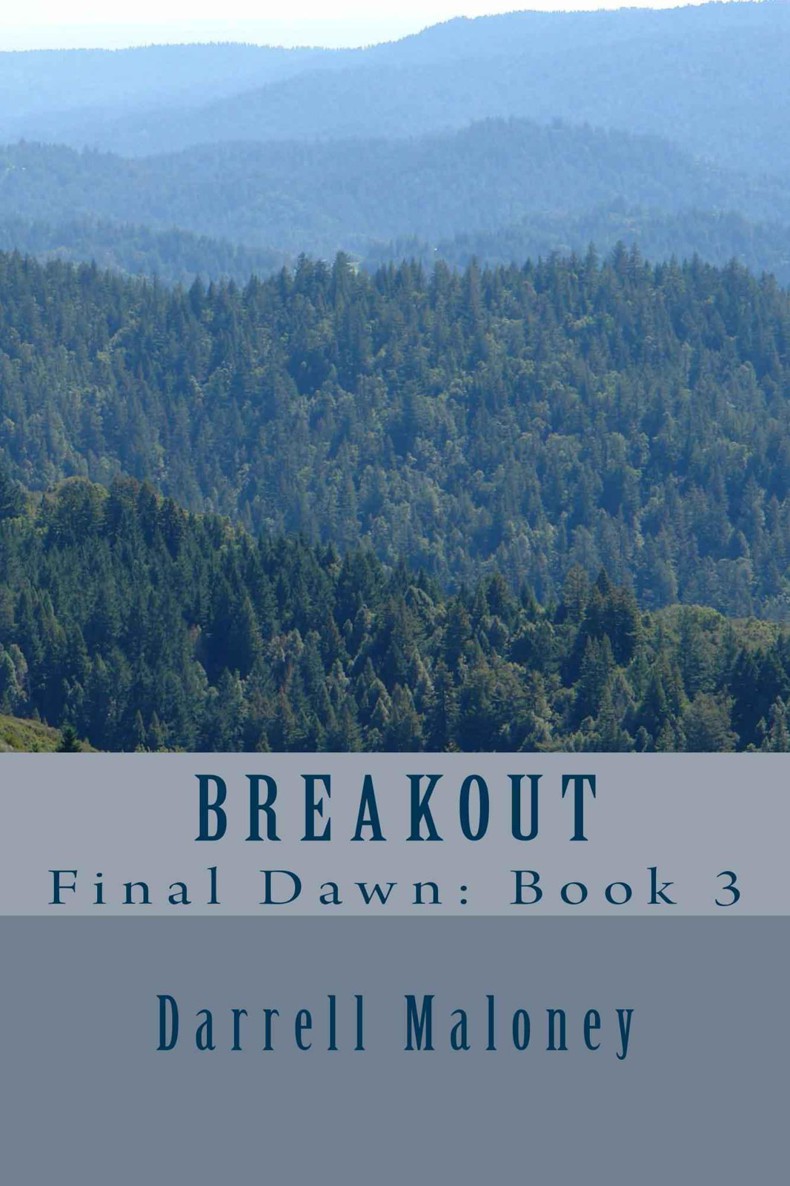 This is a work of fiction. All persons depicted in this book are fictional characters. Any resemblance to any real person, living or dead, is purely coincidental. Copyright 2014 by Darrell Maloney

A recap of
FINAL DAWN,
the first book in this series

Sometimes the gods of fate smile upon you, and bestow
upon you a treasure of such magnitude, such wonder, that you pinch yourself over and over until you finally believe it’s really real.

And sometimes those same gods bestow upon you a bowl of smelly, steaming crap.

They seldom do both within the same week.

Mark Snyder seldom played the lottery himself. He considered it a hopeless waste of money. But the love of his life, Hannah Jelinovic, played regularly. And sweet Hannah had been sick in bed for two days and hadn’t been able to get out.

So on a lark, Mark picked up a ticket for her. The right numbers came up and Hannah and Mark were suddenly multi-millionaires. Things seemingly couldn’t be better.

But not so fast. The very next day Hannah went back to work as a contractor for NASA, tracking meteorites and asteroids in the heavens. She discovered a new one. One that was heading for earth. And it was bigger than the one that wiped out the dinosaurs four million years before.

For her efforts, Hannah was demoted and threatened with prison if she disclosed the information to anyone.

“Because it won’t be here for almost three years. We have plenty of time to divert it or destroy it. Telling the public will just cause panic.”

But Mark and Hannah knew better than to trust the government. They began using their newfound wealth to prepare for
Armageddon.

The couple enlisted the help
of Mark’s brother Bryan and Hannah’s best friend and co-worker Sarah. They purchased an abandoned salt mine that would afford them the protection they needed to survive deep underground.

Then it was just a matter of getting it ready. They created a list of those they’d take into the mine with them. Those family members and close friends who made the cut would become part of the forty who would spend five to seven years underground. Waiting for the dirt kicked up by
the meteorite designated Saris 7 to fall back out of the atmosphere, so that the sun would shine through again and thaw a frozen earth.

There were a million and one things to consider. It wasn’t just a matter of buying food and water for forty people for seven years. That would have been tough enough. But to do so secretly required a lot of planning.

And there were other things as well. The group had to plan for electrical power, fuel, supplies, medicine, and a thousand other things we take for granted until faced with not having them anymore.

Meanwhile, Hannah and Sarah waited for their employer to do the right thing… to tell the public what was coming, and let the world prepare for it. They heard from an insider that there are no plans to save the world. Only a chosen few in Washington and their families and friends. The President of the
United States had a place to hide, in the cold war bomb-proof shelters beneath the streets of Washington. And he had plans to take four hundred or so others with him. Family, friends, cronies. For the rest of the United States, they’d be on their own.

For Hannah and Mark, Sarah and Bryan, that just wouldn’t do. The girls risked prison to go on national television to tell the world. Then they went into hiding in the mine.

The federal government, of course, tried to discredit them and claimed it was a hoax, until other scientists began speaking publicly around the world to support Hannah’s claims.

Faced with undeniable evidence of the truth, the President had t
o backtrack. He shifted to his Plan B… another lie.

“Don’t worry,” he told his citizens. “We have a plan. We’ll work with the Chinese. By combining their rockets with our nuclear warheads, we can send up a weapon capable of diverting the meteorite onto another path.”

People around the world were conflicted. They desperately wanted to believe. No one wanted to die. But they knew they couldn’t trust their governments. Some panicked. Some rioted. Some calmly accepted their fate.

And some, like Mark and Hannah, continued to prepare for the end.

A few days before impact, the mine was finally ready. The group gathered up family and friends and gave them shelter. It wasn’t a tropical paradise, but it would enable them to survive.

Final Dawn
ended when Saris 7 collided with the earth. Around the world, millions were dying. But hidden deep within an old salt mine outside of Junction, Texas, these forty would survive.

A recap of
HIDDEN,
the second book in this series

For six and a half years, the world had grown dark and cold. Outside the mine, the survivors struggled to stay alive. The worst of mankind reared its ugly head, as men fought each other to the death for meager provisions and belongings. But the better side of mankind was also present. Neighbor helped neighbor and strangers sometimes banded together for mutual strength and protection.

Inside the mine, the group of forty were better off than most. But they weren’t insulated from either the violence or the pain.

There were joyful times as well. New love sprouted. And Hannah’s baby, Markie Junior, was a chip off the old block. A handful to be sure, but one who spread joy and cheer to everyone around him.

The group welcomed two more into their fold amidst tragic circumstances. And it wouldn’t be the only pain they felt. Mark’
s mother died while in the mine, a tragedy no one saw coming.

For years they planned and prepared. Watched the skies for relief from the haze that covered the sun and kept the earth from thawing. And when the sun finally returned, they broke out from their
subterranean prison, to take up residence in a compound they’d built before the disaster.

Most of the world was dead now. But many of the people who remained were little more than animals. For a long time they followed no laws and offered no quarter. They learned to take what they wanted and to
kill whoever got in their way.

The group of forty had planned carefully. Had
grown a limited number of plants within the mine for the purpose of having seeds for crops. They raised livestock in the mine, and planned to form a community outside the mine when the world warmed again.

But the meteorite and its fallout wouldn’t be the only threat they were to face.

Here, in
Breakout,
is Book 3 of this series.

Hannah hadn’t slept in a real bed for a very long time. For six and a half years she and Mark had slept on a four inch mattress in the back of a recreational
vehicle, deeply hidden within an abandoned salt mine.

Oh, the mattress wasn’t that bad. Not really. And considering that most of the world was dying outside the mine while she was able to sleep safely
at night, she really had nothing to complain about.

But now that the group had finally broken out of the mine and ventured out into a brave new world, Hannah was looking forward to a real bed, soft and warm and big enough to stretch out in.

And now, on their very first night outside the mine and in a nearby walled compound, she was sleeping like a baby.

But not any more.

Little Markie, almost six
and a total mini-me of his father, crawled into bed beside her and poked his finger into her cheek. Three times.

Hannah was now somewhere between slumber and consciousness, in that foggy zone where one isn’t sure whether or not they’re dreaming.

But she sure hoped she was.

Then she felt it again. The tapping of the finger. And the accompanying words: “Mommy, are you awake?”

“No, honey. Mommy is sleeping.”

Nothing gets a mother’s attention faster than a child who’s afraid. Hannah’s eyes were instantly open, her mind immediately searching for whatever had frightened her dear child.

She looked at Markie, lying in the bed beside her.

“Afraid of what, little sailor?”

She lifted up the covers so little Markie could crawl inside with her and Mark. Then she patted her pillow. “Lay your little head right here and snuggle with Mommy. Tell me why you’re afraid.”

“Honey, we
are
home. We just stayed in the other place while we were waiting for it to get light again outside. And waiting for it to be warm again, so we could come out of the mine. This will be our home from now on. You’ll get used to it, I promise.”

The cramped RV in the back of the mine was the only home Markie had ever known.

“Why don’t you like it,
honey? What scares you about it?”

She held him close.

“I know for a fact that no monsters will ever get in your bed. No monsters are
allowed in this building. Your daddy put a big sign out in front that says ‘Monsters Go Away.’ So all of the monsters have to go bother somebody else. They can’t even come in here.”

“Nope. We have monster proof locks. We had to order them special from the Monster Proof Store. And your silly daddy, he hung them upside down the first time. So Uncle Bryan had to come and show him how to do it right.”

“You got that right, little buddy. He’s sillier than all the sand on the beach.”

“No, Mommy. He’s sillier than all the stars in the sky.”

“No, little sailor. He’s sillier than all the water in the ocean.”

“I’ve never seen those things… stars and beaches and oceans. Except in picture bo
oks. Will I ever get to see them for real?”

She brushed aside some hair that had fallen into eyes.

“Oh, yes. Maybe not the ocean. We’re very far away. And the beaches, well, they’re the oceans’ next door neighbors. We’ll try to take you to see both of them someday. But the stars, the stars live right here with us in our new home.”

Midnight in the Garden of Good and Evil by John Berendt
The Flemish House by Georges Simenon, Georges Simenon; Translated by Shaun Whiteside
Daring Time by Beth Kery
Doctor in Love by Richard Gordon
Jeff Sutton by First on the Moon
Succubus Revealed by Richelle Mead
Beneath His Darkness (Healing Hearts #3) by Renee Dyer
Hard Way by Lee Child
The Glass Cage: Automation and Us by Carr, Nicholas
Unnoticed and Untouched by Lynn Raye Harris
Our partner