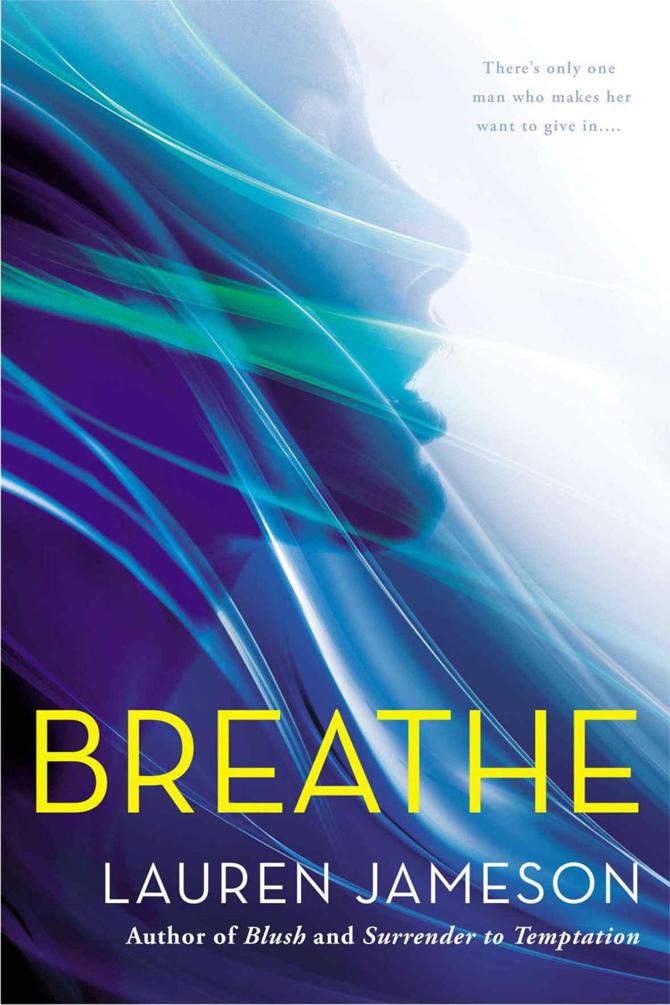 For my wonderful husband, Rob. See?
I’m finally dedicating one to you!

SPECIAL PREVIEW OF
SURRENDER TO TEMPTATION

T
he sculpture stood on a small marble table in the center of the spacious resort lobby. A perfect, slender column of emerald green glass rose in a straight line nearly three feet high before overflowing into streams of glass that sparkled like crystals. Some were as thin as a pinkie finger, looking delicate enough to snap off at the slightest breath, and some of the tendrils were as thick as a pillar candle. All varied in tones from the merest whisper of mint to the green of a dense forest.

This piece had been the manifestation of a desire that had been haunting Samantha Collins’s dreams lately. Dreams that she wasn’t entirely sure what to do with.

It had been a long time since she’d had sex, true enough, and her stress levels had been through the roof lately. But these needs that had been tugging at her had been growing stronger . . .

She’d half hoped that putting these urges into her sculpture would exorcise them.

“Wine, señorita?” An impeccably dressed waiter in a black suit made an appearance at Samantha’s elbow. On his hand he balanced a tray of crimson wine in sparkling glasses.

“Thanks.” Gratefully she accepted a glass. The flavors hit her tongue as she sipped eagerly, and she recognized it was much finer than any of the wines she was accustomed to drinking.

“Quilceda Creek Cabernet, 2005.” The waiter beamed as if he had produced the wine himself.

Samantha pasted a smile onto her face and nodded enthusiastically. “Yes. Very nice.”

Samantha liked wine, but the ones she tended to purchase came in a box or, if she was feeling fancy, in a bottle with a screw cap. She’d never heard of Quilceda Creek, though it tasted nice enough.

“Ten-dollar bottle, hundred-dollar bottle, the end result’s the same,” she spoke quietly to herself before lifting her glass in a silent toast. As she sipped, she looked down at her sculpture, still hit by a sense of disbelief that it had been chosen for exhibition.

Being at this show wasn’t helping that frustration. Not at all.

“Lovely piece, isn’t it?” The voice came from just behind her shoulder, startling her. Samantha whirled around to face the speaker, her wine sloshing in her glass.

When she saw him, she nearly swallowed her tongue.

The man was tall, at least six feet, and though he wore expensive-looking black slacks and a dress shirt, she could see enough of his physique to appreciate the muscular body beneath the clothing. Combined with his dark blue eyes, flaxen hair, and sexy-as-hell smile, his sudden appearance made it seem as if all of Samantha’s heated dreams had just come to life.

That sexy dream man cocked an eyebrow at her, and she belatedly realized that he’d asked her a question.

“Do you like this particular sculpture?” he repeated helpfully.

“It’s . . . Oh, yes, it’s very nice.” She wasn’t about to tell anyone here that she was the artist. She wasn’t ready for anyone to ask what had inspired it, especially this man, who discomforted her with his focused attention.

Deliberately she shrugged, and tried to catch one thin strap of her sundress as it slid down her shoulder. She tugged it back up and caught the man’s eyes following the movement. “It’s such a pretty color.”

She almost bit her tongue as she said it. She knew, of course, the painstaking effort that had gone into creating the gradation of hues in the sculpture, the hours she had spent gathering the molten material on her blowpipe, rolling it into finely ground glass of different shades, then setting the colors in by sweating over the smaller of her two glass furnaces—but she wanted to take care not to tip her hand that she was more than a casual admirer of the artwork.

She assumed the man would simply nod in agreement. Instead, he reached out and ran one slender finger over a curling tendril of glass, much as she had done. The care and attention of his touch over the smooth surface made Samantha think of those dreams she’d been having lately, the ones that had produced a constant ache.

In fact, last night’s had featured a man running his hands over her body exactly the same way this man was doing to the sculpture. The memory made her shiver.

“Would you like to know what I see?” His blue eyes pinned her with their intensity, and Samantha lifted her glass to her lips to give herself something to do with her hands.

“Yes, I’m curious.” She nodded, her breath catching in her throat as his fingers closed around hers where they rested on the stem of her wineglass.

The man captured the glass from her fingers and handed it off to a passing waiter. He secured a fresh one and had it in her hand without ever once taking his eyes from her.

“I see a meeting of male and female.” She felt herself getting lost in the deep, husky tones of his voice as he continued. “But more than that, I see a balance of two opposites, each feeding a need in the other.”

Samantha’s lips parted in surprise, and her heart began to pound.

“That’s what I— I mean, yes. Yes, I see that as well.” She worried her lower lip with her teeth as she spoke, afraid he would ask her about what she had started to say.

With her heart still beating double time against her rib cage, she turned from the sculpture to look up into the man’s face. He looked vaguely familiar, as if she’d met him once a long time ago.

More than the familiarity, though, there was a sense of connection. He’d understood the meaning behind her art, and with that came a tug on an invisible rope that seemed to stretch between them, pulling them ever closer.

And God, he was sexy. There was something in his demeanor that attracted her, made her want something she couldn’t quite articulate.

Liquid heat pooled between her legs and she held herself back from reaching out to touch him.

“What are you thinking?” The man’s voice was low, but Samantha could hear him as if he were the only other person in the crowded room. His sharp gaze made her feel like the only woman in the world, and she had the insane urge to spill all her secrets to him.

The Stone Idol by Franklin W. Dixon
Death of a Squire by Maureen Ash
A Forever Kind of Family by Brenda Harlen
Smudge the Stolen Kitten by Holly Webb
Intaglio: The Snake and the Coins by Danika Stone
Hometown Holiday Reunion by Mia Ross
Kenneth Bulmer by The Wizard of Starship Poseiden
THE CLEARING by Boland, Shalini
Ghosts on the Coast of Maine by Carol Schulte
Equal of the Sun by Anita Amirrezvani
Our partner