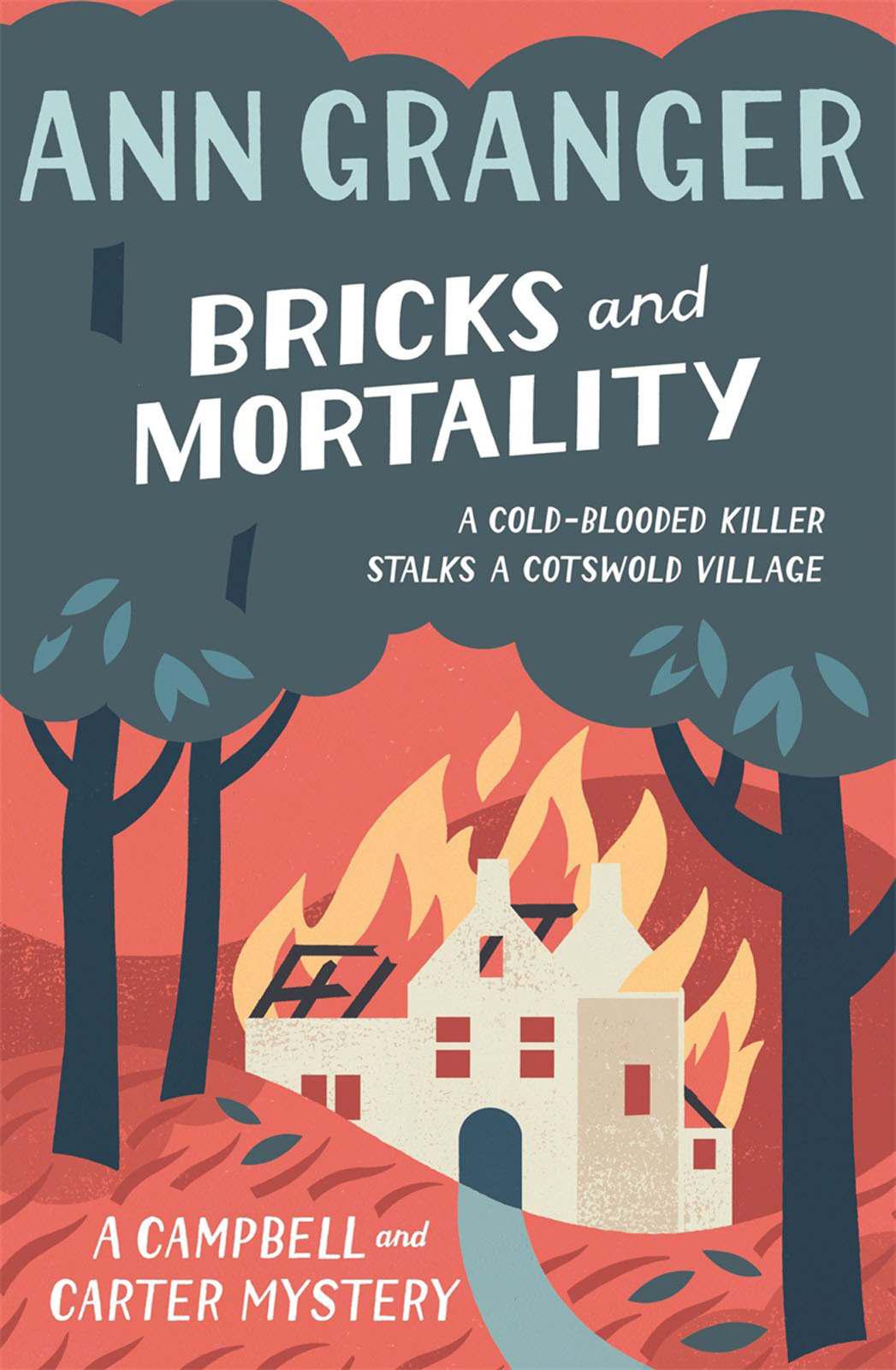 The right of Ann Granger to be identified as the Author of the Work has been asserted by her in accordance with the Copyright, Designs and Patents Act 1988.

First published as an Ebook by HEADLINE PUBLISHING GROUP in 2013

In the cold light of dawn, a dead body is found entombed in the smouldering remains of a burnt-out Cotswold manor. Key House has stood empty for years, but its owner, Gervase Crown, is rumoured to have been seen in Weston St Ambrose prior to the blaze. Could he be responsible for the fire and the tragic death that followed, or was he in fact the intended target? As Inspector Jess Campbell and Superintendent Ian Carter begin their investigation it becomes clear that Gervase wasn’t the most popular and his return reawakens old memories, not all of which are good.

By Ann Granger and available from Headline

A Rare Interest In Corpses

A Better Quality of Murder

A Particular Eye for Villainy

Say It With Poison

A Season For Murder

Cold In The Earth

A Fine Place For Death

Flowers For His Funeral

Candle For A Corpse

A Touch Of Mortality

A Word After Dying

To John and Diane Boland
The New Zealand Connection

‘Begin at the beginning,’ the King said, gravely, ‘and go on until you come to the end: then stop.’

Sooner than the fire-raiser might have wished, a crimson haze seeping across the night sky gave warning of flames below. Glowing cinders dusted the rosy cloud with sparkling points of gold like a tiny firework display. Woken by the wail of the fire engines, people living up to a mile away hung out of their upper windows and told each other, ‘That’ll be Key House.’

‘You mark my words,’ declared Roger Trenton, ‘this will turn out to be the work of squatters. Haven’t I said it, time after time? That place was a regular tinderbox, just sitting there, empty, not properly secure, waiting for something like this to happen! I blame the council.’

‘Not the council’s fault,’ muttered his wife, climbing back into bed. ‘They didn’t go up there and put a match to the place.’

Her husband turned his head in her direction. ‘They might just as well have done!’ Against the pink sky his wispy hair stuck up in a disordered halo above his glistening, balding brow. ‘A high forehead, that’s what I’ve got,’ he was wont to say. ‘I’ve still got plenty of hair, but I’ve inherited a high forehead from my father.’

He
was bald, too, thought Poppy Trenton, burrowing down among the pillows. High forehead be blowed! I remember his father being bald when Roger first took me home to meet his family. I should have studied my future father-in-law more closely. If I’d realised that Roger would turn out just like the old blighter, I might’ve broken off the engagement, there and then. Look at him! He even wears the same sort of pyjamas as his father, striped flannel with a draw cord at the waist, and corduroy slippers.

‘Ho, ho, ho!’ cried Roger. He raised a hand and shook a triumphant finger at the distant fire. ‘Told you so!’

His wife peered over the duvet towards the window where her husband stuck to his station. It was a wonder he didn’t start capering with glee. Aloud, she said crossly, ‘Even if squatters are responsible for the fire, I hope no one is trapped.’

‘Plenty of windows – they’ll have got out if they needed to,’ retorted Roger. ‘Got out the way they got in. None of the windows properly boarded up, you know. Door with a lock a child could probably pick. I’ve written to the council about Key House, if you remember, several times. You can read my letters yourself. The copies are all in my file of correspondence with the council. It’s blighted the landscape, that’s what it’s done. No need for it, no need at all. A fine old house just left to decay. I told that young fellow at the council, they should get in touch with the present owner and make the fellow do something about it.’

‘Gervase Crown,’ mumbled his wife. ‘He went to live in Portugal.’

‘I know that!’ snapped Roger. ‘Ruddy playboy, I suppose it was never any use expecting him to do anything. Pain in the backside.’

That caused Roger to spin round from his observation post. ‘Whose father?’

‘No he wasn’t. I went to school with him. There was nothing handsome about the fellow at all. You do talk some nonsense, Poppy. But he was a good chap, Sebastian, very sound. Never had any luck, though, not with his wife and not with that useless wretched boy. Good thing young Crown left here and took himself well away.’

‘Funnily enough,’ Poppy began, ‘the other day I—’

Roger had already turned back to the window and Poppy let her sentence remain unfinished. Roger would only say it was nonsense. But at the time she really had believed it. And now the fire … It was worrying. Perhaps I should ring Serena, she thought.

‘Aha!’ crowed Roger from the window where, with his comb of pink-glowing hair, he did resemble some demented overlarge cockerel. ‘Do you know what wouldn’t surprise me a bit? They might find a body in the ashes when the fire’s burned itself out.’

The fire had done its utmost, but Key House was not easily destroyed. It was a stone-built construction dating from the early 1700s. Its first residents moved in while Queen Anne still ruled. The Hanoverians were poised to take the throne on her death, and exiled Stuarts plotted to deny them the prize. Key House saw them and future generations come and go, weathering all storms until now. Its walls were nearly three feet thick at the base, tapering as they rose to less than a foot in width beneath the eaves. It had been roofed with some of the twenty-six sizes of traditional Cotswold roofing slate, each with its own name and allotted position on the roof. They had cascaded into the interior and now lay, higgledy-piggledy, below: long and short bachelors, becks and wivutts. They would be salvaged eventually because they were of value and, if not used to re-roof this building, be used for another.

The rest, oak staircase with turned banisters and ornately carved newel post, floorboards, joists, beams and age-darkened panelling in the entrance hall, study and dining room, was all gone. The remains of the beams were still recognisable; they had been fashioned from ancient tree trunks. They smouldered, badly charred and blackened, broken into irregular lengths. But they still showed the knotholes and the occasional gouge where the carpenters, fashioning them by hand, had scored too deeply.

It was mid-afternoon before it was realised that a body lay beneath the rubble in the area that had been the kitchen, where the remains of modern fitted cupboards hung blackened from the walls. Roger Trenton would soon learn he had been right.

Inspector Jessica Campbell was a late arrival on the scene, in the wake of the grim discovery. She watched the steam and smoke billowing from the defiant shell and felt on her cheeks the heat being given off in palpable waves from the once-mellow blocks of Cotswold stone. Now soot-blackened and still too hot to touch, they, too, were survivors. She put her cold fingers to her face and felt them absorb the warmth and the tips tingle.

It had been a mild month until recently. But over the last couple of weeks winter had announced itself in uncompromising fashion with the strengthening winds and first frosts. The mechanical hedge-trimmer did not venture down this lonely road so the trees and bushes around offered up a dishevelled display of skeletal arms. The fallen leaves piled in drifts and filled the ditches. Any trees still sporting growth did so with an air of defiant apology. It was as if they knew the few shabby scraps of foliage clinging on were no substitute for the reds and yellows of their autumnal glory days, even less the verdant shades of spring to come.

Dry leaves had floated across the neglected lawns of Key House, forming mulch between the tangled blackberry bushes that had escaped from the hedgerows around and invaded the garden. Over years they had colonised it, creeping almost up to the building. The activity of the firefighters had flattened some of the spiny tentacles and the water from their hoses made the leafy blanket glisten. When the human presence had left again, the blackberry bushes would shake off the temporary rebuff and resume making their remorseless inroads. The leaf mulch would moulder down to crumbling brown tilth. If no one rebuilt Key House, the undergrowth and bushes would enter through the gaping holes left in the stonework by broken windows and burned-out doors.

The Town Mouse and the Spartan House by Terry Deary
Benjamin Dragon - Awakening (The Chronicles of Benjamin Dragon) by Cooper, C. G.
Aurora 04 - The Julius House by Charlaine Harris
Sweet Masterpiece - The First Samantha Sweet Mystery by Connie Shelton
Master of Bella Terra by Christina Hollis
The Roar of the Crowd by Rich Wallace
A Season of Gifts by Richard Peck
FATED by Roberts, A.S
We Are What We Pretend to Be by Kurt Vonnegut
Wings of Sorrow (A horror fantasy novel) by Iain Rob Wright
Our partner