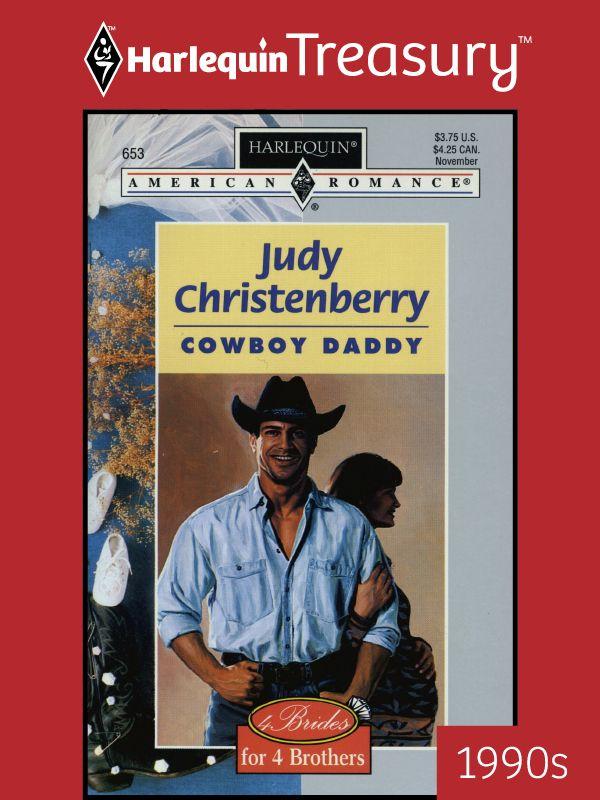 Last month Jake Randall stopped at nothing to get little brother Chad married off—but he’s not content to stop there! He wants Pete and Brett to follow Chad down the aisle, then populate the Randall ranch with herds of little ones. This month, and in the months ahead, you’ll read all about this family in my new miniseries, 4 BRIDES FOR 4 BROTHERS!

I love big families who care about each other and I love cowboys. Out there on their Wyoming ranch, the Randall brothers fill both bills. As oldest brother and keeper of the family, Jake feels responsible for the fact that none of his brothers has married, so he sets out to play Cupid for them. Like most big brothers, he thinks he knows best. And like most younger brothers, Chad, Pete and Brett don’t cooperate! Their stories will make you laugh out loud and make you want to join the Randalls in their pursuit of love.

I hope you’ll join me at the Randall brothers’ ranch for all four books in the 4 BRIDES FOR 4 BROTHERS series!

He was tall, broad shouldered, and his tan face was turned down in a frown. Janie Dawson had worked hard to prepare for this meeting, girding her strength. But one look at the cowboy standing in his living-room doorway told her no mental exercise could have toughened her enough to face Pete Randall.

He wasted no time on amenities. “What are you doing here?”

Her eyebrows rose at his directness. She’d been a neighbor of the Randalls since her birth. As a child, she’d been in and out of their house countless times. As a teenager, she’d followed Pete Randall around with all the adoration of a young girl for her idol. As a woman, she’d been his lover.

But now she evidently needed a good reason for being there.

His hands rested on his trim hips, and his browneyed gaze stayed on her face. “As I remember, three weeks ago you told me you never wanted to speak to me again.”

She felt her cheeks heat up. He was right, of course. Three weeks ago, she’d decided she’d made a mistake, a big mistake, believing Pete’s desire for her meant he loved her. Instead, it had meant exactly what it was—lust.

As long as she could remember, she’d loved Pete Randall. When he’d finally noticed her as a woman, all grown up, she’d fallen into his arms, ready to follow wherever he led.

He’d led her straight to bed.

Six months later, when she’d finally woken up from the sexual haze his touch brought about, she’d realized she wasn’t his love but his lover.

Her teeth sank into her bottom lip. “Yes, I did.” She walked across the room to the front window and stared out at the cold Wyoming day.

From behind her, his voice deepened. “So, what’s changed?”

She turned around before he could come too near, a fixed smile on her face. “I think I was a little hasty.”

A flame in his brown eyes ignited, and a lazy grin lit his face. “You mean you want to come back to me?”

She’d had her game plan worked out, but the fluttering of her heart at his question almost shook her. With a deep breath, she clung to her goal. “No, that’s not what I mean.”

His gaze hardened again. “Then what?”

She stuck her fingers in the back pockets of her jeans so he wouldn’t see them shaking. “I wanted to ask you a question.”

He folded his arms across his chest. “Ask away.”

Easier said than done. She swallowed and shifted her gaze from his. She could get the words out better if she wasn’t looking at him. “I wanted to ask you—ask you to marry me.”

The taut silence that followed her question forced her gaze back to his well-loved features. A mixture of shock and panic filled his face.

She wasn’t surprised by his reaction. She’d been pretty sure he wouldn’t consider her offer. The Randall brothers, all four of them, were notorious bachelors. They had all resisted marriage since the marriage of the oldest brother, Jake, had ended in divorce.

“Have I shocked you?” she finally asked when he failed to answer.

He nodded as he moved toward her. “Yeah, you have. Look, Janie, I told you from the beginning I wasn’t—I had no intention of—I care about you, Janie.”

“But you don’t love me.” She stated her conclusion with finality, having expected no less. It was a struggle to keep a smile on her face, but she did.

His big hand caressed her cheek.

“Sweetheart, I wouldn’t do anything to hurt you but—but I’m not cut out for marriage. You know that.”

His touch almost destroyed her composure. She stepped back from him. “Yes, I know.”

An awkwardness filled the room. When she thought she could bear the silence no longer, she stepped around him and walked to the door. “Sorry I interrupted your work,” she tossed over her shoulder, glad she didn’t have to face him again.

She ignored his command. If she stayed any longer, she wouldn’t be able to keep her smile in place.

That question stopped her in her tracks. Why not tell him? He’d have to find out sometime. And she already had the answer to her question. Turning, she stiffened her shoulders, pasted on her brightest smile and said, “Because I’m having your baby.”

Then she left the room.

P
ETE STOOD
without moving, stunned, like the time Joe Bob Daly had broken Pete’s nose in his first fight. Only Janie’s disappearance awakened him.

“Wait!” he called, but he didn’t rely on his voice to bring her to heel. After all, he knew Janie well. Instead, he hurried after her into the entry hall, catching her by the arm and pulling her back when she would’ve left the house.

“Where do you think you’re going?” he growled.

“Home.” She flashed him that breezy smile she’d been using the past half hour.

“You drop a bombshell like that and then plan on waltzing home?” he demanded, outrage rising in his voice as the shock retreated.

“Well, it’s a little early for a formal announcement. What else do you want from me?”

She sounded so reasonable, as if she’d announced she was dying her hair. Instead, she’d said she was…having his baby. It almost took his breath away.

“Well?” she said, her hands on her slim hips, her smile slipping a little.

“Why didn’t you tell me?” he finally asked.

Her brows soared. “I just did.”

“When did you find out? Have you been to the doctor?”

“I’ve suspected for a few days,” she admitted, running a finger along the edge of the hall table, not meeting his gaze. “I saw Doc Jacoby yesterday.”

Pete knew there must be a thousand questions to ask, but he was too overwhelmed. Finally he managed to say, “When…?”

“And everything is all right?”

“Oh, yes. I’m healthy as can be.” She didn’t wait for any more questions. Turning toward the door, she said, “I have to go now.”

“Wait!” he repeated, grabbing her arm again. “We have to make plans.”

“For our marriage, for one thing,” he said, wondering if pregnancy affected the brain. A discussion of future plans should’ve been obvious.

“No, that’s not necessary.”

That damn plastic smile was back in place, and she wasn’t making any sense. “Of course it’s necessary. We’ve both got family to invite…and friends… and…”

“There’s not going to be a wedding, Pete,” Janie said softly. “That’s why we don’t need to make plans.”

He almost stumbled back at the second blow Janie had delivered. “What are you talking about? Of course there’s going to be a wedding!”

She shook her head, her stubborn little chin rising as it always did when she was digging in her heels. Then she reminded him, “You turned me down, remember?”

Suddenly her earlier behavior made sense. “Yeah, but you didn’t tell me
why
you asked me to marry you.”

“In my book, there’s only one reason to ask or accept. And it’s not a baby.”

“Well, it should be! I’m not having my son born a bastard, thinking I didn’t care enough to marry his mother!”

“You do what you want…but I’m not marrying you,” she returned rapid fire.

“Because you don’t love me, Pete. You want me…but you don’t love me. That’s not enough for marriage.” For the first time, her smile disappeared and unshed tears filled her blue eyes. This time, before he could stop her, she left.

He stared at the closed door, rational thought almost impossible. Janie’s bombshells left him too distraught. After several minutes, he turned to the back of the house, automatically heading for the kitchen, the gathering place for his family.

Red, the cowboy-turned-cook who’d taken care of him and his three brothers since his mother’s death twenty-six years ago, was working at the sink. “Janie gone?”

A Single Girl's Guide to the Zombie Apocalypse by JT Clay
The Betrayal of Renegade X (Renegade X, Book 3) by Chelsea M. Campbell
Immortal At Sea (The Immortal Chronicles Book 1) by Gene Doucette
Zero Recall by Sara King
Dancing Through Life by Candace Cameron Bure, Erin Davis
White Colander Crime by Victoria Hamilton
Taking Off by Jenny Moss
How to be Anonymous Online by Eydie, A. M.
Vacation to Die For by Josie Brown
The Dating Game by Natalie Standiford
Our partner