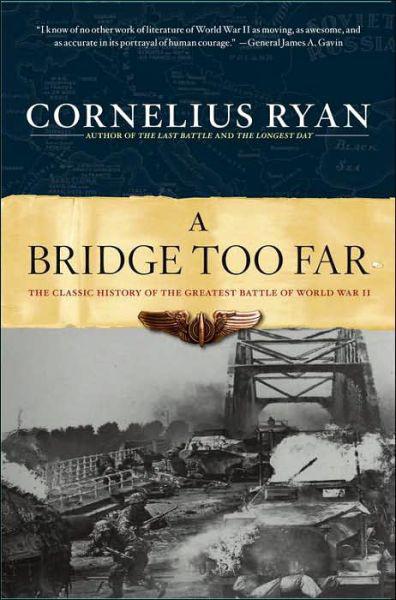 A BRIDGE TOO FAR

Now deceased, Cornelius Ryan was born in 1920 in Dublin, Ireland, where he was raised.  He became one of the preeminent war correspondents of his time, flying fourteen bombing missions with the Eighth and Ninth U.s. air forces, and covering the D-Day landings and the advance of General Patton’s Third Army across France and Germany.  After the end of hostilities in Europe, he covered the Pacific war.  In addition to his classic works The Longest Day and The Last Battle, he was the author of numerous books, which have appeared throughout the world in 19 languages.  Awarded the Legion of Honor by the French Government in 1973, Mr.  Ryan was hailed at that time by Malcolm Muggeridge as “perhaps the most brilliant reporter now alive.”  He died in 1976, two years after the publication of A Bridge Too Far.

On the narrow corridor that would carry the armored drive, there were

five major bridges to take.  They had to be seized intact by airborne

assault.  It was the fifth, the crucial bridge over the Lower Rhine at

a place called Arnhem, sixty-four miles behind the German lines, that

Allied Airborne Army.  Pointing to the Arnhem bridge on the map he

asked, “How long will it take the armor to reach us?”  Field Marshal

think we might be going a bridge too far.”  The final conference at

A Note on Casualties

A BRIDGE TOO FAR

Shortly after 10 A.m. on Sunday, September 17, 1944, from airfields all over southern England the greatest armada of troop-carrying aircraft ever assembled for a single operation took to the air.  In this, the 263rd week of World War II, the Supreme Allied Commander, General Dwight David Eisenhower, unleashed Market-Garden, one of the most daring and imaginative operations of the war.  Surprisingly, Market-Garden, a combined airborne and ground offensive, was authored by one of the most cautious of all the Allied commanders, Field Marshal Bernard Law Montgomery.

Market, the airborne phase of the operation, was monumental: it involved almost five thousand fighters, bombers, transports and more than 2500 gliders.  That Sunday afternoon, at exactly 1:30 P.m., in an unprecedented daylight assault, an entire Allied airborne army, complete with vehicles and equipment, began dropping behind the German lines.  The target for this bold and historic invasion from the sky:

On the ground, poised along the Dutch-Belgian border, were the Garden forces, massed tank columns of the British Second Army.  At 2:35 P.m., preceded by artillery and led by swarms of rocket-firing fighters, the tanks began a dash up the backbone of Holland along a strategic route the paratroopers were already fighting to capture and hold open.

Montgomery ’s ambitious plan was designed to sprint the troops

and tanks through Holland, springboard across the Rhine and into Germany itself.  Operation Market-Garden, Montgomery reasoned, was the lightning stroke needed to topple the Third Reich and effect the end of the war in 1944.

In the thousand-year-old Dutch village of Driel, people listened intently.  Even before dawn, restless sleepers woke and lights came on behind shuttered windows.  Initially there was only a sense of something unaccountable taking place somewhere beyond the immediate, physical surroundings.  Gradually vague impressions took form.  In the far distance came a muted, continuous mutter.

Barely audible, but persistent, the sound reached the village in waves.  Unable to identify the subtle noise, many listened instinctively for some change in the flow of the nearby Lower Rhine.  In Holland, half of which lies below sea level, water is the constant enemy, dikes the major weapon in a never-ending battle that has gone on since before the eleventh century.  Driel, sitting in a great bend of the Lower Rhine, southwest of Arnhem, capital of Gelderland, has an ever-present reminder of the struggle.  A few hundred yards to the north, protecting the village and the region from the restless 400-yard-wide river, a massive dike, topped by a road, rises at places more than twenty feet high.  But this morning the river gave no cause for alarm.  The Neder Rijn swept peacefully toward the North Sea at its customary speed of two miles per hour.  The sounds reverberating off the stone face of the protective dike came from another, far more ruthless, enemy.

As the sky lightened and the sun began to burn off the mist, the commotion grew louder.  From roads due east of Driel the villagers could clearly hear the sound of traffic—traffic that seemed to grow heavier by the minute.  Now their uneasiness turned to alarm, for there was no doubt about the identity of the movement: in this fifth year of World War II and after fifty-one months of Nazi occupation, everyone recognized the rumble of German convoys.

Even more alarming was the size of the procession.  Some people later recalled that only once before had they heard such a flow of traffic—in May, 1940, when the Germans had invaded the Netherlands.  At that time, swarming across the Reich frontier ten to fifteen miles from Driel, Hitler’s mechanized armies had reached the main highways and spread swiftly throughout the country.  Now, over those same roads convoys seemed once more to be moving endlessly.

Strange sounds came from the nearest main road—a two-lane highway connecting Arnhem, on the northern bank of the Lower Rhine, with the eighth-century city of Nijmegen, on the broad river Waal, eleven miles to the south.  Against the low background throb of engines, people could plainly identify individual noises which seemed curiously out of place in a military convoy—the scrape of wagon wheels, the whir of countless bicycles and the slow, unpaced shuffling of feet.

What kind of convoy could this be?  And, more important, where was it heading?  At this moment in the war Holland’s future could well depend on the answer to that question.  Most people believed the convoys carried heavy reinforcements—either pouring into the country to bolster the German garrison or rushing south to halt the Allied advance.  Allied troops had liberated northern France with spectacular speed.  Now they were fighting in Belgium and were said to be close to the capital, Brussels, less than one hundred miles away.  Rumors persisted that powerful Allied armored units were driving for the Dutch border.  But no one in Driel could tell for sure exactly the direction the convoys were taking.  Distance and the diffusion of sound made that impossible.  And because of the nightly curfew the villagers were unable to leave their houses to investigate.

Plagued by uncertainty, they could only wait.  They could not know that shortly before dawn the three young soldiers who constituted little Driel’s entire German garrison had left the village on stolen bicycles and pedaled off into the mist.  There was no longer any military authority in the village to enforce the curfew regulations.

Unaware, people kept to their homes.  But the more curious among them were too impatient to wait and decided to risk using the telephone.  In her home at 12 Honingveldsestraat, next to her family’s jam-and-preserves factory, young Cora Baltussen called friends in Arnhem.  She could scarcely believe their eyewitness report.  The convoys were not heading south to the western front.  On this misty morning, September 4, 1944, the Germans and their supporters appeared to be fleeing from Holland, traveling in anything that would move.

The fighting that everyone had expected, Cora thought, would now pass them by.  She was wrong.  For the insignificant village of Driel, untouched until now, the war had only begun.

Fifty miles south, in towns and villages close to the Belgian border, the Dutch were jubilant.  They watched incredulously as the shattered remnants of Hitler’s armies in northern France and Belgium streamed past their windows.  The collapse seemed infectious; besides military units, thousands of German civilians and Dutch Nazis were pulling out.  And for these fleeing forces all roads seemed to lead to the German border.

Because the withdrawal began so slowly—a trickle of staff cars and vehicles crossing the Belgian frontier—few Dutch could tell exactly when it had started.  Some believed the retreat began on September 2; others, the third.  But by the fourth, the movement of the Germans and their followers had assumed the characteristics of a rout, a frenzied exodus that reached its peak on September 5, a day later to be known in Dutch history as Dolle Dinsdag, “Mad Tuesday.”

Panic and disorganization seemed to characterize the German flight.  Every kind of conveyance was in use.  Thronging the roads from the Belgian border north to Arnhem and beyond were trucks, buses, staff cars, half-track vehicles, armored cars, horse-drawn farm carts and civilian automobiles running on charcoal or wood.  Everywhere throughout the disorderly convoys were swarms of tired, dusty soldiers on hastily commandeered bicycles.

There were even more bizarre forms of transportation.  In the town of Valkenswaard, a few miles north of the Belgian frontier, people saw heavily laden German troopers laboriously pushing along on children’s scooters.  Sixty miles away, in Arnhem, crowds standing on the Amsterdamseweg watched as a massive black-and-silver hearse pulled by two plodding farm horses passed slowly by.  Crowded in the casket space in back were a score of disheveled, exhausted Germans.

Trudging in these wretched convoys were German soldiers from many units.  There were Panzer troops, minus tanks, in their black battle suits; Luftwaffe men, presumably all that remained of German air force units that had been shattered in either France or Belgium; Wehrmacht soldiers from a score of divisions; and Waffen SS troops, their skull-and-crossbones insignia a macabre identification.  Looking at these apparently leaderless, dazed troops moving aimlessly along, young Wilhelmina Coppens in St.  Oedenrode thought that “most of them had no idea where they were or even where they were going.”  Some soldiers, to the bitter amusement of Dutch bystanders, were so disoriented that they asked for directions to the German frontier.

In the industrial town of Eindhoven, home of the giant Philips electrical works, the population had heard the low sound of artillery fire from Belgium for days.  Now, watching the dregs of the beaten German army thronging the roads, people expected Allied troops to arrive within hours.  So did the Germans.  It appeared to Frans Kortie, twenty-four-year-old employee in the town’s finance department, that these troops had no intention of making a stand.  From the nearby airfield came the roar of explosions as engineers blew up runways, ammunition dumps, gasoline storage tanks and hangars; and through a pall of smoke drifting across the town, Kortie saw squads of troops rapidly working to dismantle heavy antiaircraft guns on the roofs of the Philips buildings.

All through the area, from Eindhoven north to the city of Nijmegen, German engineers were hard at work.  In the Zuid Willemsvaart Canal running below the town of Veghel, Cornelis de Visser, an elementary-school teacher, saw a heavily loaded barge blown skyward, shooting out airplane engine parts like a deadly rain of shrapnel.  Not far away, in the village of Uden, Johannes de Groot, forty-five-year-old car-body builder, was watching the retreat with his family when Germans set fire to a former Dutch barracks barely 300 yards from his home.  Minutes later heavy bombs stored in the building exploded, killing four of de Groot’s children, aged five to eighteen.

In places such as Eindhoven, where school buildings were set ablaze, fire brigades were prevented from operating and whole blocks were burned down.  Still, the sappers, in contrast to the fleeing columns on the roads, gave evidence of following some definite plan.

What a Hero Dares by Kasey Michaels
Bonshoon: A Tale of the Final Fall of Man by Andrew Hindle
Star Trek: The Hand of Kahless by John M. Ford
A Nearly Perfect Copy by Allison Amend
Walker Bride by Bernadette Marie
Because of You by Maria E. Monteiro
On a Desert Shore by S. K. Rizzolo
Deadly in New York by Randy Wayne White
Sleeping Helena by Erzebet YellowBoy
A Fighting Chance by William C. Dietz
Our partner