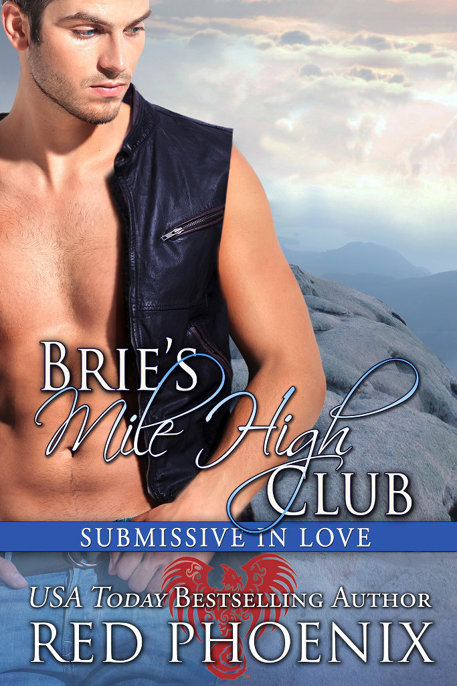 I want to personally thank Kallypso Masters for collaborating on a scene with me in this book. It was a fun adventure for us and something I think our mutual fans will enjoy.

More love and kisses to my hubby!

And a big thanks to my beautiful betas.

**Keep up to date with the newest release of Brie’s
Submissive in Love
series by signing up for Red Phoenix’s newsletter:

Ghosts of the Past

The Cat’s Out of the Bag

A Note From Kallypso Masters

About the Author Red Phoenix

Connect with Red on Substance B

B
rie boarded the plane headed to Denver, along with a bunch of groggy passengers. It was four in the morning and, other than the businessmen, the majority of travelers were slow-moving and sleepy. She waited patiently for people to stuff their luggage into the upper bins, but had to quell her irritation when some of them took far too long to do that simple task.

At one point, an older woman tried several times to lift her baggage above her head to slide it into the bin. When the man in front of Brie refused to extend his help, she pressed past him to offer her assistance.

“It’s so rare to find gracious young folk these days.”

“They’re still around, ma’am. They’re just harder to find at four o’clock in the morning.”

The woman laughed, insisting that Brie stay as she dug in her purse and produced a piece of wrapped candy. “It’s from my secret stash. Best chocolate in the world,” she stated proudly, handing it to Brie.

Brie thanked the woman before moving farther down the aisle, curious where Sir could be hiding. She was surprised to spot her handsome Master at the very back of the plane.

Sir winked as he took her bag and placed it in the bin above. He took out a blanket and a small pillow, handing them to her.

He leaned in and said in a seductive whisper, “Trust me, téa, you’re going to need it.”

Her heart quickened at the use of her sub name. “Ah…well then, thank you.” She scooted to the window seat and buckled herself in, placing the two items on her lap. “I’ve never ridden at the back of a plane with you before, Mr. Davis,” she teased flirtatiously.

“When I noticed this wasn’t going to be a full flight, I decided we should take advantage of the fact,” he replied, grazing his finger under her chin.

“I must say I like your way of thinking,” she said, and added in the barest of whispers, “…Master.”

He sat down and commanded in a low voice, “Lay your head on the pillow and cover up with the blanket.”

Brie grinned to herself as she followed his directions, propping the small pillow against the window, wondering what he had planned.

After the plane had taken off and the lights had been turned off so the passengers could sleep, Sir instructed her to close her eyes. She was thrilled by the mystery behind his unusual requests, and dutifully lowered her eyelids, refusing to open them even when the
ding
above her announced that the seatbelt sign had been turned off.

Brie heard Sir take out his computer, followed by a light clicking sound as he started to type.

It was pure torture sitting there with her eyes closed, not knowing what he was up to, but she remained still as per his command. When a stewardess passed by, Brie heard Sir stop her and explain, “We would prefer not to be disturbed for the rest of the flight, but I would appreciate a glass of water.”

Brie giggled to herself, never tiring of hearing service people unwittingly call him by his title.

After the woman returned with his water, she heard Sir pull down her tray and placed the plastic cup on it before lifting the armrest between them. “Now, téa, unbuckle yourself. Place the pillow on my shoulder and lay your head against it while you cover my lap with an extra portion of your blanket.”

They released their belts at the same time and Brie nonchalantly switched her position, settling her head on Sir’s shoulder. She noticed a movie playing on his computer screen and noted that he was wearing earphones to make it appear as if he were actively watching the show.

Brie dutifully closed her eyes again, waiting for her next set of instructions.

After several minutes, Sir murmured, “Slowly, so no one will notice, slide your hand under my boxers and take hold of my cock.”

Her pussy contracted pleasantly upon hearing his command. With sloth-like movements, she headed towards that sacred spot between her Master’s legs. Sir had already unfastened his slacks, allowing Brie easy access to his shaft. Her fingers slipped under the elastic band of the boxers and grasped his rigid cock.

She remained still as she felt his hand move ever so slowly under her skirt and beneath her lace panties. He rested his hand over her mound and stopped.

They stayed like that—neither moving—but each deliciously aware of the other’s hand resting on their sex.

Brie remained silent, keeping up the ruse of a sleeping partner as she explored his shaft with imperceptible movements. She was rewarded with drops of precome on the head of his shaft, announcing his enjoyment to her without words. She used the coveted liquid as lubricant, rubbing it over his shaft as she stroked him ever so slowly and his cock hardened, throbbing in response.

Brie nestled her head against his shoulder, squeezing his shaft tighter as she stroked him, longing to make the challenge as difficult for him as it was for her. She heard the stewardess pass by again and froze. When Sir assured her that the woman hadn’t given them a second glance, she started up again.

Brie relished the fact that this was their first “official” encounter after deciding to have a child. He had warned her there would be no intercourse until their wedding night, but he’d also promised they would enjoy alternative activities while they waited. Never in a million years would she have guessed they’d be pleasing each other miles above the Earth—in the presence of strangers, no less—the very next morning.

“No one is near. Stroke me harder, téa.”

Brie grasped his cock and pumped it with real gusto until he gripped her wrist tightly. She heard someone pass by and whispered, “Close.”

“Closer than you think,” he groaned hoarsely, his cock pulsing in her hand with denied release.

After the individual had returned to their seat, Sir ordered, “You’re to remain still, a pleasant expression on your face, with your eyes closed. Anyone walking by will only note that there’s a beautiful girl sleeping beside me.”

Sir proceeded to roll his finger over her clit, wetting it with her own excitement. He teased her opening with his middle finger while he occasionally flicked his thumb over her clit. The randomness of that thumb’s attention had her body hyper-sensitive. Each time his thumb rubbed against her, a burst of electrical energy headed straight to her core, building her sexual desire.

When he determined she was primed and ready, Sir started stroking his finger from her entrance up to the tip of her clit in slow, rhythmic motions that mimicked his long, tantalizing lick. She let out a soft gasp and he stopped.

Keeping her eyes closed, she pretended to yawn and pressed against him, hoping he would continue. After several minutes, the stroking started up again. Brie could think of nothing but the sensations his touch evoked, and the only way to assure it would continue was not to respond in any way.

Every time she heard someone pass by in the aisle, it added an extra thrill to the experience, increasing her arousal exponentially.

Normally such subtle attention would not result in an orgasm, but the exhibitionist aspect with the added risk of being caught was an aphrodisiac for Brie. When she could take no more, her body tensed for its release.

Sir noted that she was close and started rolling his finger over her clit again, bringing her to a glorious, drawn out orgasm. Not a peep did she make, nor did she move, as her pussy contracted and released, wetting his finger.

She felt his cock stiffen in her hand, exposing the pleasure he gained whenever he orchestrated her climax. It was intoxicating to feel proof of how much he enjoyed pleasing her on a purely physical level.

Brie opened her eyes to sneak a peek and saw Sir staring at his screen with a bored expression on his face. No one would ever suspect the naughtiness going on under the tray tables beneath their blanket.

Her natural inclination was to return the favor but, while still watching the screen, Sir commanded under his breath, “Remove your hand from my cock, téa.”

She did so, reluctantly, because it was a direct order, but she was sad not to have the opportunity to please him more fully. Once her hand was back on her lap, Sir removed his and licked his fingers as if he’d just finished eating a delicious snack while watching his movie. He then took the water from her tray and drank it, a smile playing on his lips.

Brie quickly closed her eyes when he turned his head in her direction. She did not dare stir again until the airplane began to descend and Sir shook her shoulder.

WILDER: A Rockstar Romance by Lux, Vivian
Daisy Fay and the Miracle Man: A Novel by Fannie Flagg
The Glass Kitchen by Linda Francis Lee
After the Banquet by Yukio Mishima
Love for the Matron by Elizabeth Houghton
Seduced by the Wolf by Bonnie Vanak
The Last Guardian Rises (The Last Keeper's Daughter) by Rebecca Trogner
The Alpha's Choice: A Paranormal Werewolf Romance (Roadside Angels Motorcycle Club Book 3) by Thomas, Kathryn
Guardians of the Keep: Book Two of the Bridge of D'Arnath by Carol Berg
The Training Ground by Martin Dugard
Our partner