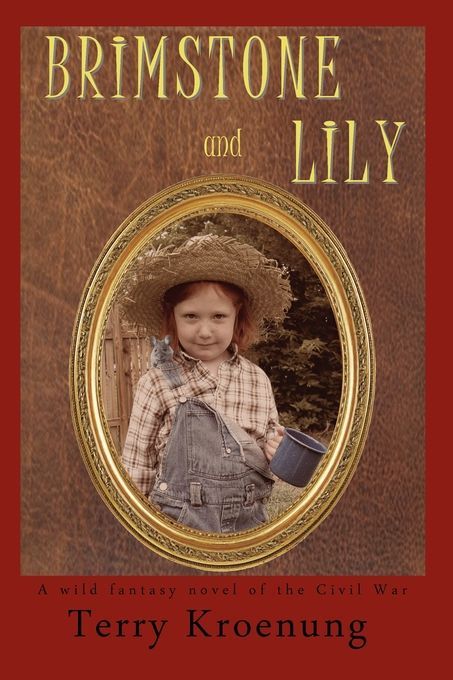 A note from y’all’s intrepid narrator

6/ Marshals of the Equity

23/ How to Glamour a General

35/ Attack of the Shades

39/ Slave to the Croatan

The experts speak about Brimstone and Lily:

“The manuscript that corrupted Hadleyburg!”

“From hell’s heart I stab at thee! For hate’s sake I spit my last breath at thee!”

“All right, then, I’ll go to hell…as long as I don’t have toread that book again.”

Attention all students, teachers, and other crazed literature geeks!

There are several dozen references to famous books in Brimstone and Lily, particularly to great books of the 19th century. Twain’s The Adventures of Huckleberry Finn and Melville’s Moby-Dick are most represented, along with some Charles Dickens, but so are To Kill A Mockingbird and The Hitchhiker’s Guide to the Galaxy, among others. See how many you can spot! Sponsor B & L Lit Parties! Amaze your friends! Kick butt on Jeopardy! Be smarter than a 5th grader!

We’ll post a list on the book’s website. So compare your list with mine. Who knows, maybe you’ll spot names, places, or plot devices that didn’t even strike me as allusions. Since I write in a complete trance most days, that’s absolutely possible.

The publisher does not have any control over and does not assume any responsibility for author or third-party websites and their content.

All rights reserved. No part of this book may be reproduced or transmitted, in any form or by any means, electronic or mechanical, including photocopying, recording, or by any information and storage retrieval system, without written permission from the publisher.

A fantasy of the Civil War

A note from y’all’s intrepid narrator

Ma says I oughta make sure y’all understand about this here book. I hafta admit it sure looked like the south end o’ a north-bound horse when I first scribbled it (sorta like this here introduction). I tend to get pretty good grades in English Literature but Miz Finch threw up her pudgy hands and declared that the Pennsylvania State Normal School sure never prepared her for my grammar. Thought she’d expire o’ the vapors when she first eyed the rough copy. But betwixt her, Ma, and Sha’ira we wrassled the words into a rough sort o’ shape that swanky, educated folks like yourselves kin read without too much eyestrain. We cleaned up the narration parts some but tried to leave most o’ the dialogue stuff alone, so y’all get the flavor o’ the thing.

I just don’t want to misrepresent that I’m some sort o’ literary stylist, ‘cause I sure enough ain’t. Took a month o’ Sundays t’ put lipstick on this here pig, let me tell ya. Miz Finch might be contemplatin’ a career change. If I’d known what a trouble it was to write a book I never would o’ tackled it.

As far as the talkin’ bits go, I guess I oughta apologize in advance for Jasper. You’ll see what I mean.

...the most magick-hunted person on Earth.

Right past my eye! Too
close.
The wasp-sting of the Fell Knight’s sword point buzzed so close to my nose that for an instant I saw two of them. A drop of sweat leapt from my face as I jerked back and the bead split itself on my foe’s steel.
Move, move, move!
Giving his rapier blade a quick tap upward with my parrying dagger, I cart-wheeled left. As I’d expected, my enemy’s own poinard gouged jagged woodchips where my foot had just been. I shrugged my dripping hair out of my eyes and squared off to meet his new attack.
Not much more than a warm-up so far.

“You’re too predictable,” I told him with a smirk.
The saucy heroine must
always
smirk at the villain. I think it’s a rule.

“Predict this!” he sneered, giving me a feint thrust to the left shoulder. I moved to block it with my rapier but he deceived it. His tip dipped below my guard and licked at my wrist. Ready for him, though, I knocked it aside with a snap of my dagger.
Is that your best move?
In that same second he stepped in hard with his own short steel to dispatch me witha jab to my right flank, his intended target all along.
Clever boy
.

But he hadn’t reckoned with the rattlesnake responses of Verity the Valiant. I paralleled both of my blades and spanked the knife out of his cruel fingers. With a yelp he tried to take my head off with his sword.
Good thing I can do a fast split!
His long edge tickled my cowlick as my feet slid apart and I dropped to the floor. I looked up, catching him out of position from his follow-through. Scissoring my legs back together, I rose to his exposed throat with my blades crossed. I placed the iron X at his sweaty neck, feeling his frightened pulse pounding through my edges.

I snarled, “Do you yield, monster?”

The Fell Knight gave me a proud laugh. “To the likes of you? Never! Do your worst, wench!”

“I take you at your word, then!”
My weapons clattered to the stage floor as I began tickling him in his bony ribs.

“Hey!” Eddie shrieked, his defense against my wiggling fingers as vain as his swordplay had been. “You’ll make me wet my pants!” High and ringing, his voice echoed in the empty theatre.

That only increased my gleeful assault. I pinned him against the stage left proscenium arch. “Give?” My arm wrapped around his neck and I Dutch-rubbed his scruffy brown noodle. “Give? Say uncle!”

My stage brother squirmed like a trapped rat but that got him nowhere. I’d always been stronger. “Oww!” He threw up his dirty hands. “Okay! Okay! Uncle, then! Don’t scalp me like a red Injun!”

I released him with a grin and staggered out the stage door into the alley for some air, making the cats and rats scatter. Eddie followed, gasping.
Lordy, it’s hot.
Side-by-side, arms around one another’s shoulders, we gazed east toward the half-completed Capitol dome.
They still ain’t finished the darned thing, or the Washington Monument, neither.Prob’ly have to wait for the war to end now
. I’d heard, though, that President Lincoln vowed to keep working on the dome, no matter what Jeff Davis tried to do.

We flopped onto a pile of just-delivered scenery canvas. Later we’d make flats out of it, transforming it all into mountains and skylines and forests. Already I could smell the glue.
Ick!
That smell of that stuff always made my head hurt. Near as bad as the smell of the Canal. Seemed the farther into summer we got the worse the raw sewage stunk. Made you wonder why the Confederate army would want the place. Richmond sounded ever so much nicer than Washington. Our capital still needed paved streets and decent plumbing. I’d seen the mud so bad that a fire engine drove onto the sidewalk so it wouldn’t sink. Some days I wished Ma had never moved us here from the Maryland farm where I’d been born.

Touching his own aching noggin, Eddie made a face and offered me

the jug of water he’d been guzzling. We panted and sweated in the June humidity. “I get to win next time. You can be the villain.”

“Only if you invent the fight moves. Them’s the rules. Besides, I like givin’ bad guys their comeuppance.”

He nodded toward the hole he’d made in the apron floorboards. You could see it even from that distance. “We have to fix that quick. If Mr. Ford sees it we’ll be the ones getting the comeuppance.”

“If you hadn’t stabbed so hard you wouldn’t’ve put a dent in his new floor. It’s just pretend, you know.”

“I know, but it has to look proper.” Eddie sure loved
proper
. Proper speech, proper clothes, proper manners. Everything had to be correct. That’s how you could tell we weren’t real kin.

“You’re gonna get a proper whuppin’ if you don’t fill that back in and paint it before their dress rehearsal tonight.” I nudged a pot of glue at him with my toe. “Here. Put the big chunks back, sand everything off even, and then slap some black paint down.”

I sighed, something I did a lot around Eddie. “You’re a piece o’ work, Edward Stubb. How is it that you can paint the prettiest pictures but you’re useless for paintin’ a floor?”

To be honest, Eddie couldn’t really have been as useless as I let on. Mr. Ford paid him a nickel apiece to make color sketches of scenery and costumes. No adult could do them as well. Mr. Sherburn, the company carpenter, and Ellen Sauveur (my mother), the wardrobe mistress, used them as references.

I snorted.
Different’s the word, all right.
He’d fooled us all once, Ma and me included, by waltzing into the lobby of Ford’s Athenaeum dressed as a snooty rich lady. For ten minutes he’d complained about the ticket prices, how uncomfortable the seats felt, and the ruffian next to him spitting tobacco juice on the floor. Then he stuck his snoot in the air and stormed out. We might never have discovered him if he hadn’t come to supper with a tiny bit of rouge on one cheek. Mr. Ford announced that soon he’d put Eddie onstage. Even at twelve years old, he acted that well. Most of what I know of disguises and accents I learned from him.

Eddie was a lot prettier than me. I hate that word.
Was.
It still takes some getting used to, that he’s gone. Taken by the Bullies. You know what that means.
Dead, or wishin’ you was
.
Magicked into something horrible, not even able to make a human scream.

Anyhow, Eddie had a prettier face than me, though that ain’t saying much. Prettier than his three girlfriends, too. Everybody called me a tomboy. A “ragamuffin”, Mr. Ford would say when he got cross at me. Short red hair, pug nose, and freckles. Dresses made me itch and corsets made me cry. All that girlie stuff left me cold. Seemed to me that all that girls and women got to do boiled down to three things: embroider, stay clean, and giggle. I preferred hammers and wrestling and swordfights.
And maybe that’s why you only have one friend in the whole world.Who wants their kid to be seen with the freak?
Ma always said I’d grow out of it, a terrible thing to contemplate. “You’re only twelve,” she’d told me that very day
.
“When you’re a bit older you’ll see.”