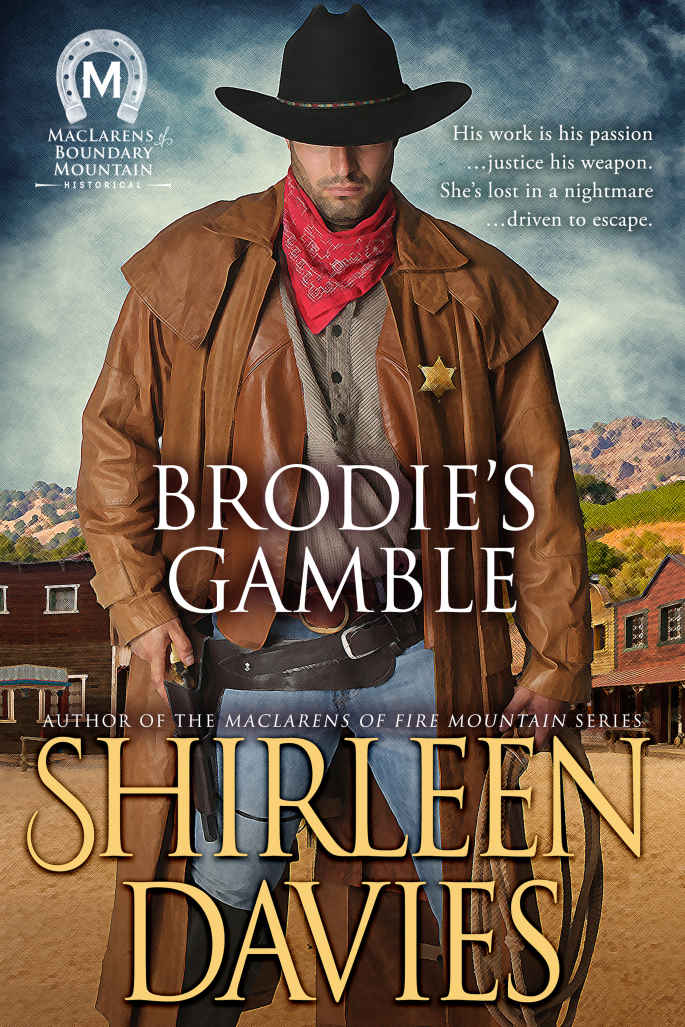 Tougher than the Rest, Book One

Faster than the Rest, Book Two

Harder than the Rest, Book Three

Stronger than the Rest, Book Four

Deadlier than the Rest, Book Five

Wilder than the Rest, Book Six

All Your Nights, Book Four

No Getting Over You, Book Seven

Reclaiming Love, Book One, A Novella

Our Kind of Love, Book Two

The best way to stay in touch is to subscribe to my newsletter.
Go to

www.shirleendavies.com
and subscribe in the box at the top of the right column that asks for your email. You’ll be notified of new books before they are released, have chances to win great prizes, and receive other subscriber-only specials.

Kindle Readers:
Sign up to follow me on
Amazon
to be notified of new releases as they become available. It’s the Follow button just under my photo on the left side.

Book Two in the MacLarens of Boundary Mountain

Brodie’s Gamble is a work of fiction. Names, characters, places, and incidents are either products of the author’s imagination or used facetiously. Any resemblance to actual events, locales, or persons, living or dead, is wholly coincidental.

Book design and conversions by Joseph Murray at
3rdplanetpublishing.com

I care about quality. If you find something in error, please contact me via email at
[email protected]

“Every book of Shirleen's never fails to draw me in and make it impossible to put down until I devour it!”

Brodie MacLaren
has a dream. He yearns to wear the star—bring the guilty to justice and protect those who are innocent. In his mind, guilty means guilty, even when it includes a beautiful woman who sets his body on edge.

Maggie King
lives a nightmare, wanting nothing more than to survive each day and recapture the life stolen from her. Each day she wakes and prays for escape. Taking the one chance she may ever have, Maggie lashes out, unprepared for the rising panic as the man people believe to be her husband lies motionless at her feet.

Brodie’s orderly, black and white world spins as her story of kidnapping and abuse unfold. The fact nothing adds up as well as his growing attraction to Maggie cause doubts the stoic lawman can’t afford to embrace.

Can a lifetime of believing in absolute right and wrong change in a heartbeat?

Maggie has traded one form of captivity for another. Thoughts of escape consume her, even as feelings for the handsome, unyielding lawman grow.

As events unfold, Brodie must fight more than his attraction. Someone is after Maggie—a real threat who is out to silence her.

He’s challenged on all fronts—until he takes a gamble that could change his life or destroy his heart.

Brodie’s Gamble, book two in the MacLarens of Boundary Mountain historical western romance series, is a full-length novel with an HEA and no cliffhanger.

Thanks also to my editor, Kim Young, proofreader, Alicia Carmical, and all of my beta readers. Your insights and suggestions are greatly appreciated.

As always, many thanks to my wonderful resources, including Diane Lebow, who guides me through my social media endeavors, my cover designer, Kim Killion, and Joseph Murray who is a superb at formatting my books for both print and electronic versions.

“Hold him down.” The tallest of the boys put his hands on his knees and bent over, laughing at Brodie MacLaren, who glared back as he tried to free himself. Sixteen years old, tall and strong for his age, it took five boys to hold him down—six if you counted their leader, Horst Ackermann, the oldest of the bunch.

“Did you think you could pass through our neighborhood without paying for the privilege?” Horst glanced at his friends. “These arrogant Scots believe they can go anywhere they please.”

Brodie’s body twisted in rage, his face red with anger. “It’s a free country. I can go anywhere I want.”

“Well, you can’t go through here without paying the toll.” Horst rifled through Brodie’s pockets, knowing he’d left his Saturday afternoon job an hour before. Finding what he sought, Horst gripped the coins, holding them in the air. “Look here. Appears we will have a fine time tonight.”

The boys loosened their hold on him long enough for him to wrench his hands free. Jumping to his feet, he kicked the knee of one boy, slamming a fist into another’s face, sending both crumbling to the ground. That was all the satisfaction he got before his arms were, once again, wrenched behind him.

“It’s a miserable group of lads who steal.” His defiant yell earned him several fists to the face and stomach.

Horst counted the coins, then looked at Brodie’s bleeding face.

“You know nothing of misery, MacLaren. Stay out of our part of town. And if you run to the sheriff, we’ll find you again and it won’t end so well.”

A last retort died on his lips as a final blow to his head blackened Brodie’s world.

“There’ll be no going to the law and no retaliation, lads. You’re to quit the job, Brodie, and I’ll hear no argument.” Brodie’s father, Ewan MacLaren, stood a few feet away, as his wife, Lorna, washed away the blood on Brodie’s face, then bandaged the cuts.

“But, Da, we need the money, and I like working for the gunsmith.” Brodie’s protests fell on deaf ears.

“Aye, and look what happened.” Ewan looked around the room at the oldest MacLaren cousins, Colin, Blain, and Quinn. “I’ll be talking to my brothers about this, so don’t be going against what I’m saying. You four are to stay away from Germantown. Am I clear, lads?”

Shoving hands into their pockets, each nodded.

“Good. Now, be gone with you. Brodie needs to rest.”

Sending glances to Brodie before they left, Colin, Quinn, and Blaine walked out, stopping a hundred yards away to huddle together.

“What do we do, Colin?” The youngest of the four, Blaine, always looked to his older brother, the oldest of the male cousins, for guidance.

“We wait for Brodie to heal, then go after Horst and his lads.” Colin’s steely voice held a firm conviction when he’d made up his mind about something. “Uncle Ewan means well, but he doesn’t know what we face at school and whenever we go to town. Attacking Brodie is the last of it. I’ll not be having my family threatened and robbed.”

“The punishment will be severe.” Quinn glanced behind him, confirming their uncle had not come outside.

“Taking your punishment has never bothered you before,” Blaine joked. Of all the cousins, Quinn snubbed authority more than any of them, uncaring of the penalty doled out.

“I didn’t say it would bother me.” He slapped Blaine on the back of his head and laughed. “I agree with Colin. It’s time someone stood up to Horst and there are no better lads to do it than us MacLarens.” He sobered as he considered Brodie’s reaction. “You know he’ll want us to hold a trial.”

“We take Horst, the four of us have a trial, then we teach him a lesson.” Blaine grinned, glad to have contributed.

Colin nodded. “It’s settled then. We wait for Brodie to heal, then do what’s needed.”