Read Broken Heart 04 Wait till Your Vampire Gets Home Online

Broken Heart 04 Wait till Your Vampire Gets Home 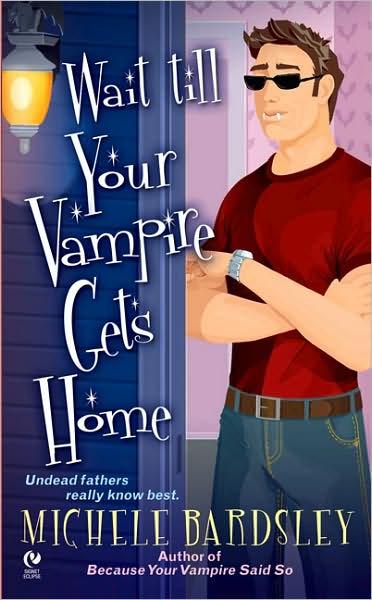 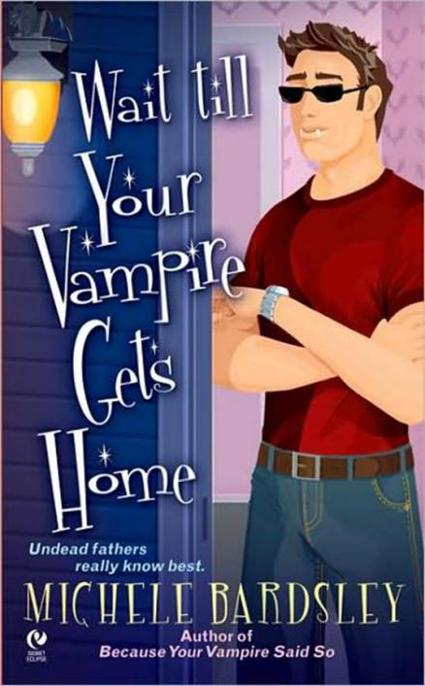 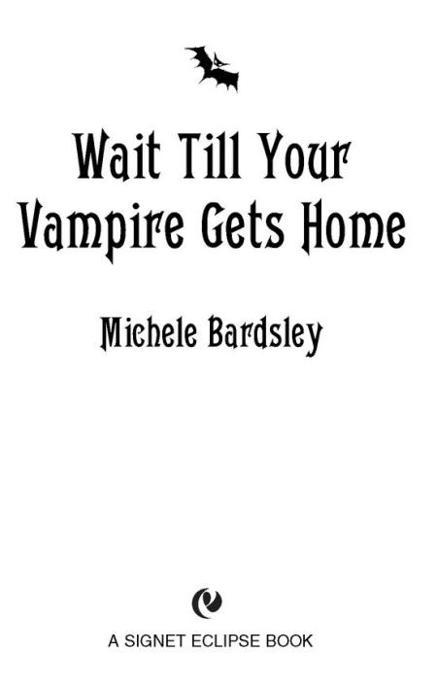 I hugged the large oak tree as I tried to catch my breath. Sneaking around this creepy little town in the dark—and during winter, no less—was such a bad idea. Especially considering I’d been scared out of my wits by those . . . those
howls
.

Shivers raced up and down my spine. What in the world had made those terrifying sounds? Surely not dogs. Coyotes? Wolves? Eek! My shivering turned into full-body shudders.

“Crystal One, Crystal One,” spat my cell phone. It was on two-way radio mode. “Please state your location.”

My gloves were thick, but I managed to press the button on the phone’s side. “Seriously, Mom,” I whispered. “Do we have to use ridiculous code names?”

“I almost named you Crystal.” Her tone suggested she’d always regretted that decision. Oh, please. Burdening an infant with “Seraphina Liberty Windsong Monroe” was bad enough. I started calling myself Libby at the age of ten, much to Mom’s disappointment. However, my parents were all about free expression and independent thinking. If their only child desired to be called Libby, that desire would be honored.

I rolled my eyes. “I’m here, Ruby Two. I’m still in the woods, but I can see the cemetery, so I’ll head toward it. Where are you?”

“We’re just off the main road, walking toward a place called the Thrifty Sip. It looks abandoned. Sapphire Three is lamenting his hoped-for ICEE.”

I laughed. My dad’s single dietary weakness was a frothy, sugary, colorful ICEE, which my mother equated to the devil’s brew. Dad told me once that everyone needed to indulge in one bad-for-you thing. “Makes life worth living, Peanut,” he’d said with a wink.

I clicked the button again. “Any signs of Bigfoot?”

“None,” responded Mom. “But those howls sounded promising. Werewolves, maybe.”

For the last few months, stories about Broken Heart,
, had circulated among paranormal investigators. Everything from sightings of Bigfoot to tales of flying men had been bandied about until my parents could no longer resist the challenge. They’d spent the last twenty-five years trying to prove the existence of vampires, werewolves, Bigfoot, angels, aliens, other dimensions, and all kinds of supernatural phenomenon. In 1983 they started Paranormal Research and Investigation Services, aka PRIS. I was born two years later, and they’d raised me to believe in the paranormal.

We’d lived on the road, so I’d been home-schooled. My curriculum included Math, English, Astral Projection, and Psychic Phenomena. I got my GED, then I took the certificate course at the
of
. After I finished the twelve-month program, I went to
and enrolled in the HCH Institute. Another year, another certificate—this one in Parapsychological Studies.

Getting those certificates wasn’t nearly as much fun as slogging through the
swamps looking for Bayou Boo, half man and half alligator.

At the age of twenty-three, I was itching to strike out on my own. It wasn’t that I didn’t believe in my parents’ dreams of discovering the unknown, or, in most cases, the unbelievable. I yearned for something all my own. I supposed it was time to create the life I wanted . . . only I didn’t yet know what I wanted.

I tucked the phone into my coat pocket. We were supposed to meet back at the car in thirty minutes. We’d been in Tulsa to check out a haunted hotel (nope, no ghosties), and decided to hit Broken Heart on the way to meet our team in
.

Ack! So. Freaking. Cold. And I was still unnerved by the animal cries. I listened for the howls, relieved when I heard nothing but the wind rattling the branches above me. Some investigator I was! I wasn’t supposed to let little things like werewolves (ack!) and freezing weather stop me.

I pressed my cheek against the tree. No warmth there. Why hadn’t I thought of a ski mask? The black parka had done a fair job of keeping most of me warm, but the hood offered no protection to my face. My skin felt scraped raw by the chilled air. The rough bark wasn’t exactly helping, either.

I let go of the tree, but stayed close. I readjusted the strap of my oversized purse, which clunked in protest. My parents were big believers in being prepared and they’d taught me many skills. MacGyver had nothing on us.

I inhaled the loamy smell of earth and the crisp scent of pine. It felt like tiny icicles were forming in my nose and lungs. I heard some nearby rustling and clenched the oak, peering around the wide trunk.

I stifled a gasp when I saw a man kneeling next to a heart-shaped marble tombstone, which looked the worse for wear. The top right corner had broken off. He placed an armful of brightly colored silk flowers on the ground and appeared to be talking to the headstone.

Oh, crap. Spying on someone in a graveyard was so wrong. But I couldn’t quite convince myself to walk away.

I was fairly close, but because my glasses were flotsam in the junk sea of my purse, I had to squint to read the inscription:

He wasn’t exactly dressed for cold weather. He wore white Nikes, jeans, and a thick, blue sweater. No coat, gloves, or hat. He looked like a normal guy. Nice bod, but not one made by Bowflex. Who knew? Maybe that sweater hid some rock-hard abs.

He took out a spade and started to work around the edge of the marble base.

The silence was ungodly. No chirping crickets, stir of little mammals, or twitter of birds. In this odd quiet, the spade rasped unpleasantly as the man thrust it into the hard-packed earth, alternating between scraping and digging.

Feeling more and more uncomfortable, I studied the rest of the cemetery. Tombstones were tilted, broken, or fallen. The place looked as if it had been ravaged by an earthquake. It looked old, but not uncared-for. I idly wondered what had happened to the place.

My gaze returned to the man. I really shouldn’t get any closer, but I wasn’t interested in retracing my steps. I might accidentally find the source of those hair-raising howls. He might not know it, but the guy tending the grave was the closest thing to safety I had right now.

About five feet away was a lone pine tree with thickly covered branches. I held my breath and initially tiptoed from my cover, eventually racing to the pine and ducking under its flagging limbs. The needles poked at me, so I scrunched down. I was near enough to see his determined expression. He had brown hair, cut short. A nice, friendly face. Not drop-dead gorgeous, but pleasant.

I crouched next to the tree and watched him make a narrow trench. Then he stuck the flowers in and arranged them. I don’t know why I stayed. Watching a man do this heart-wrenching work wasn’t exactly polite. I guess I just didn’t want to leave. I felt like someone needed to stand watch with him, even if he was unaware of my presence. Stupid, right?

The wind kicked up, slicing at my face like Ginsu knives. I clamped my lips together to keep my teeth from chattering.

The man finished putting the flowers together, scooped the dirt around ’em, and patted down the soil with the flat end of the spade.

He stared at the grave and I stared at him. Something about him niggled at me. His face was a shade too pale. I couldn’t fault a guy who wasn’t into baking his skin. No, it was his utter stillness that freaked me out.

“You can come out now.” He stood up, dusted off his jeans, and turned his gaze directly to the pine tree. To
me
.

How had I given myself away? Even though moments earlier I’d thought of him as my safety net, I knew better than to just stroll out and introduce myself. I’d learned over the years that not everything was as it seemed. He looked nice and sounded nice, but hey, so did serial killers—right until they put a knife to your throat.

“You are not afraid. You will come to me,” he said. His tone dropped an octave and went all seductive.

Yeah, right, Mr. Sexy Voice. I clutched the tree while my mind raced. Oh, to hell with it. I ducked out from underneath the unwieldy branches and raced toward the forest.

I heard the growls two seconds before I saw the animals issuing the threats. Two huge, pissed-off wolves raced toward me.

“Aaaaaaaaahhhh!” My scream echoed into the dense forest. Heart thumping, stomach roiling, fear prickling, I made a U-turn and ran back the other way. The growls gave way to fierce barking.

I shot past the pine tree. He was still there! My grave-digging safety man! His puzzled expression switched to alarm. His eyes went wide and he dropped the spade, which was a good thing, because I launched myself at him.

He caught me, staggered backward, and then tried to let me go.

The man scooped me into his arms and held me close. I pressed my face into his shoulder and held on to him like he was Superman. I wished he
was
Superman—then he could fly me away from danger.

“Are th-they gone?” I asked. My purse dangled from my right side, slapping at my hip. “Did you s-scare them away?”

“So what?” I was
terrified
, and he was complaining about my breath control?

“Here?” I asked, allowing my breath to roll over his skin again.
Why
was I asking him about the area under his left ear? Knowing where not to breathe on him wasn’t all that relevant.

Well, so was I. I lifted my head and glanced down. The wolves were a couple of feet away, pacing. Their fur was thick and glossy—shimmering like black silk in the moonlight.

“What are they doing?” I whispered.

“Deciding whether or not to eat you.”

“Ralph Genessa. And you are?”

“Scared out of my freaking mind.” I tightened my grip around his neck.

The wolves snapped and snarled.