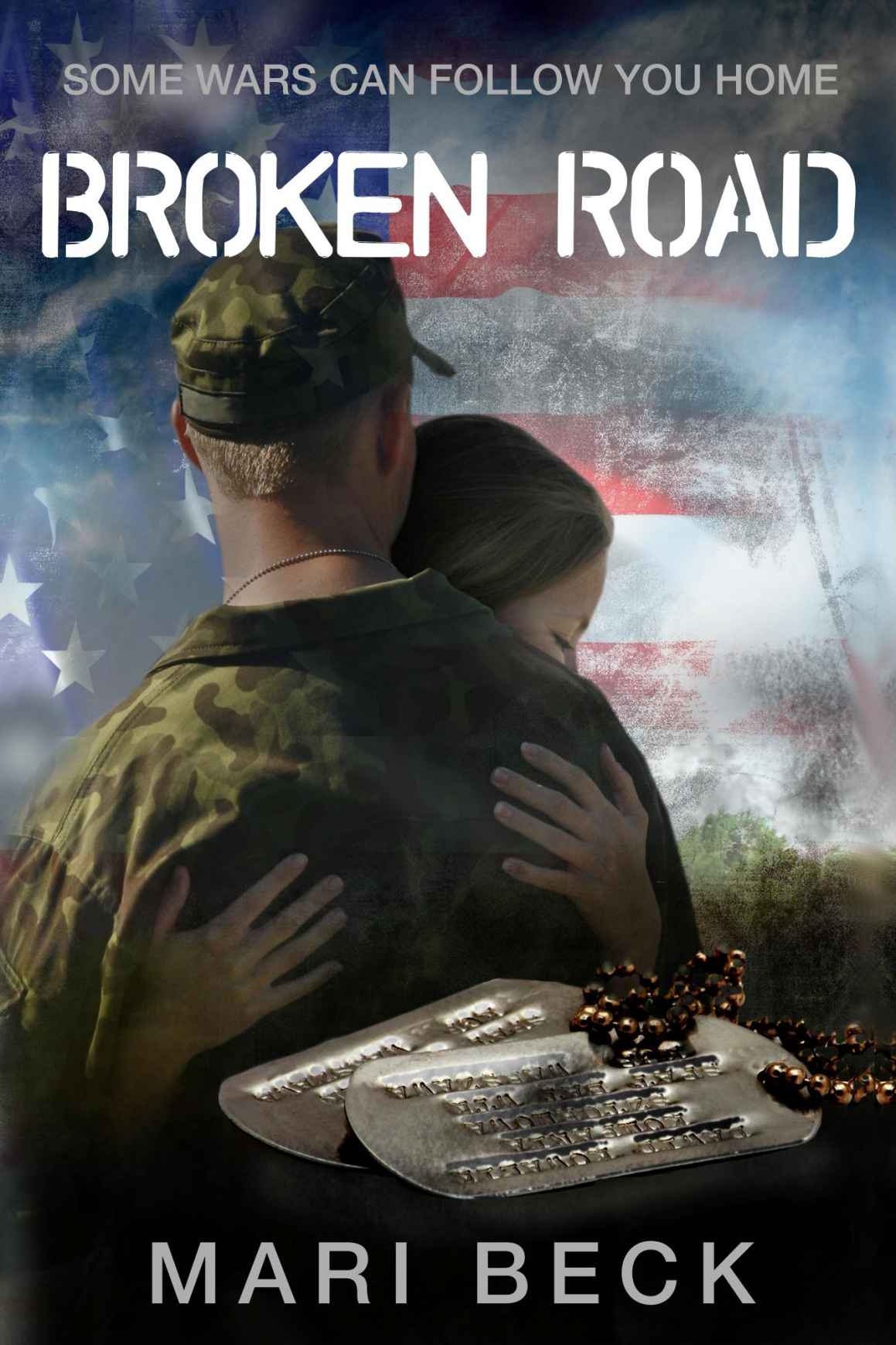 Chapter Eleven - The Box in the Road

Chapter Fourteen - The Break Up

Chapter Fifteen - Not Worth Living

To all service men, women & their families, past and present.

You are cherished and never forgotten.

As she ran the rain fell harder and she got wetter but she didn’t stop. She reviewed the list in her head for the hundredth time and checked off each item mentally. She had to set out clothes for the boys.
Check
. She had to remember to pick up her own dress from the cleaners.
Check.
She had to call Mark.
Check.
She had to be at the airport no later than ten.
Check.
She ran a little faster as the rain pelted her. She hadn’t initially meant to go this far from home. The plan had been that she would just keep going until it was time to turn back. She reached that point about an hour ago. It usually gave her such a feeling of peace anytime she took this route. The paths were well maintained on this part of town and managed to blend seamlessly with the rest of the neighborhoods and parks through which they cut but today she didn’t connect with it. She started running again when Shane first left on his second tour in an effort to clear her head and relieve stress. She should be thrilled that during the time Shane had been gone she’d lost almost 20 pounds running and worrying. She was almost back to her old size. The size she had been before having the boys. The size she had been when she had first met Shane. Brenda Jenner, like her clothes, could be described as simple, sensible and perhaps stylish.

She had never let herself get “dumpy” but she certainly hadn’t kept up with the fashion divas that invaded the one or two volunteer organizations to which she gave her very limited time around town. Simple rules governed her life as well as her closet. Comfort was paramount, which is why she avoided heels, but not prevalent, which is why she only wore sweats when she exercised or ran.

She invested in solid colors and never got too carried away with prints or trends. She preferred the dependable to the spontaneous. At 5’7 she was sturdy but not quite lean enough to have an athletic build.

It wasn’t that she was completely comfortable with how she looked but that there were just too many other things to think about, especially now. Too many things, she thought and ran a little faster. Not enough time to figure it all out. Too much and not enough, that’s what her life was full of these days. She felt it more and more. She felt it especially the day she went shopping for the dress she was going to wear for Shane’s homecoming. She had driven almost 100 miles from home to find it. It was important that she find just the right one. But instead of feeling the euphoria that comes with finally losing those extra pounds and fitting into the perfect outfit she felt a certain disdain for the somewhat attractive and trim woman that looked back at her from the mirror. Something was wrong or should be, but she couldn’t see it. It wasn’t obvious. She frowned. She had the same shoulder-length blonde hair, cut into attractive layers and wisps around her face. Her face had matured a little and maybe filled out in new places over the years but not in an unattractive way, she thought. Her eyes were framed by well-groomed brows with a slight arch that didn’t reflect that utter look of surprise some women unknowingly achieved by waxing just a little too much.

Her eyes were still the same delicate shade of hazel with a spattering of golden flecks and though her cheeks lacked a little bit of color, she didn’t look overly pale. There was a natural look about her, one of health and restfulness.

She looked, for the lack of a better word,
good.
That’s what Shane would say. She looked good.

Not pretty, not beautiful, but good.

She frowned again. She shouldn’t, she thought.

Something should reflect on the outside how it was on the inside, but it didn’t. She was annoyed and saddened. The sudden knock on the door to the dressing room had startled her and the sales lady had asked if she could get the dress she was trying on in a different size. No, she had answered. The size was perfect. She stared at herself in the mirror, but what about the color the sales lady had asked?

She offered it to Brenda in a nice bright red or a lovely yellow. They were the colors of the season and what woman wouldn’t want to be among the trendiest and most stylish in town? Brenda had politely refused and it wasn’t until the sales lady brought the dress back in the color she had originally requested that she finally saw it. There it was, the only clue to what was really happening inside.

She smoothed down the skirt of the sensible black dress with her hands. It was exactly the right color she thought.

At last the tears made their way down her face. It was the memory of that moment, the memory of trying on that dress that had caused her to fall. The stumble had brought her back to the present. She pulled herself up and noticed that she was covered in muddy water from head to toe. She started, unsuccessfully, to wipe some of it away when she caught a glimpse of something out of the corner of her eye and she froze.

Her eyes were drawn involuntarily to the entrance to Memorial Park Cemetery. In the distance, through the gates that surrounded the entire park, she could see a glimpse of the green tent that signaled a burial would be held soon. She felt her throat constrict. The sight was enough to jar her and spur her forward. She took off running and stopped only when she made it back to the house but on the inside she knew she would keep on running and never stop.

He was killed one week before Memorial Day on a road outside of Baghdad.
Shane’s dead
. The words filled her mind to the extent that there wasn’t room for anything else.

“The church doesn’t have enough room for everyone so this morning a publicist from the Governor’s office came in to see Father Pat.

They're expecting 600 people for the funeral maybe more. The Governor is attending and the President is sending flowers. Can you believe it? The President! Anyway, the place is already crawling with publicists and tv cameras. The local station is broadcasting the funeral the day after tomorrow and the Mayor’s office has someone here that wants to talk to you about what’s going to happen.” Brenda was listening but didn’t really hear anything her brother Father Mark Sheffield was saying. Oddly enough, all she could think about was that she had hadn’t ordered enough deli trays for the family and friends they were expecting, let alone the 600 that might be coming to the funeral.

“Brenda? Brenda, are you still there?”

She knew she should be more grateful for his help. Aside from being her brother, Mark was also a priest. He had traveled from his own parish in a small community outside of Chicago to be with her. From the moment they found out that Shane was missing to the moment they were informed that he had been killed on that road outside of Baghdad, Mark had stepped in to handle everything she couldn’t. The Casualty Assistance Officer assigned to her family had worked with them to make sure that everything would be properly done and Mark had offered to work with the young officer so that she could focus on Shane’s homecoming. He assured her that he and Father Pat, her own parish priest, could handle everything else. Even so, she marveled at how he could separate his own feelings about the loss of his brother-in-law and best friend from his duties. Shane and Mark had been college roommates and it was through their friendship that Shane and Brenda met. Now, he insisted on helping with the rest of the arrangements and serving as a go-between herself the media and others, who wanted access to her and the boys. Every time she looked out her window and saw the media vans parked outside waiting for her to come out and make some sort of statement, she was glad that he was there to protect her from the circus of people and events to come.

“You don't have to be sorry. There's nothing to worry about. Captain Meyer is really in charge of it all and he’s working with the Mayor's office to take care of everything. They're arranging a public memorial service at the YMCA across from the cemetery. That will take care of the overflow from the funeral. They’ll broadcast it live and stream it for anyone not able to find a seat in the church. They should have enough room. You don’t have to worry about a thing.” He paused for a moment and his voice softened.

“As for the music we have it covered. I’ll make sure Father Pat gets the message.” Mark paused and let the silence fill the moment before he continued. “The funeral home will be sending a car around 8:30 okay?”

“Are you sure you still want to go to the airport?”

Brenda braced herself against the tears she knew were coming.

“Yes.” She said in a barely audible voice and the tears fell anyway.

She wiped them away. “I have to go, Mark.

I always go to the airport. I’m always there to meet him. Tonight's not any different.” She said and wiped away another tear.

“Are the boys going?”

“Callan wants to go but I'm not sure about Taylor. He's so young and the plane gets in after 10. It'll be late.” Brenda answered and reached for a tissue.

“We'll all go. I love you, Brenda. It’s going to be okay.” Mark reassured her. She held back the sobs she felt waiting to explode from her.

ARISEN, Book Eleven - Deathmatch by Michael Stephen Fuchs
The Marked by Scott, Inara
The Senator's Choice by Noel Nash
01 - Empire in Chaos by Anthony Reynolds - (ebook by Undead)
When Everything Changed by Wolfe, Edward M
The Heart of an Assassin by Tony Bertot
Monster in My Closet by R.L. Naquin
The Bookman's Wake by John Dunning
The Briton by Catherine Palmer
The Marriage Charm (Bliss County 2) by Linda Lael Miller
Our partner