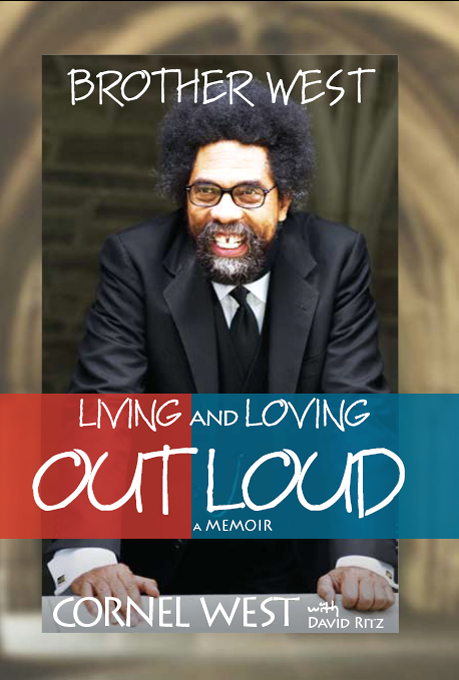 Hope on a Tightrope: Words & Wisdom

The American Evasion of Philosophy:
A Genealogy of Pragmatism

The War Against Parents: What We Can Do for America’s
Beleaguered Moms and Dads
(with Sylvia Ann Hewlett)

LIVING AND LOVING OUT LOUD

Published in the United States by:
SmileyBooks

Music Credits in back.

All rights reserved. No part of this book may be reproduced by any mechanical, photographic, or electronic process, or in the form of a phonographic recording; nor may it be stored in a retrieval system, transmitted, or otherwise be copied for public or private use—other than for “fair use” as brief quotations embodied in articles and reviews—without prior written permission of the publisher.

The opinions set forth herein are those of the author, and do not necessarily express the views of the publisher or Hay House, Inc., or any of its affiliates.

For my precious parents
Clifton and Irene West

And my beloved brother and sisters
Clifton, Cynthia, and Cheryl

PART I: A SHILOH BAPTIST KIND OF BROTHER

PART II: A PHILOSOPHER WITH A GROOVE

David Hume and Arthur Schopenhauer in the Brooklyn Navy Yard

Make Up to Break Up

“The Way You Do the Things You Do”

What Matter of Man?

What Happened to the Squeegee Folk?

Just to Keep You Satisfied

The Most Passionate Love

Messin’ with the Wrong Brother

This is a work of nonfiction.
Conversations have been reconstructed
to the best of my recollection.

I’m a bluesman in the life of the mind,
and a jazzman in the world of ideas.

PART I
A SHILOH BAPTIST
KIND OF BROTHER

I take my phone from my vest pocket and call my blessed mother in Sacramento.

“Off to see Zeytun,” I tell Mama. Zeytun is my eight-year-old daughter who lives in Bonn, Germany.

“You give that beautiful child a kiss for me, son.”

“You know I’m going to do that. Stay strong, Mama.”

I look around the cabin and see that just about everyone is equipped with a laptop computer. Everyone except me. Haven’t caught up with the high-tech world of the instant Internet. I have a bag full of books and a writing pad
.
A good pen is all I need.

It’s enough to bring along volumes of the poets I love best— John Donne, John Keats, Walt Whitman—and the philosopher Søren Kierkegaard, whose questioning approach to the deep notions of existence and knowledge help keep me halfway humble. It’s enough to scratch out my ideas on the pad, enough to drift off to sleep and dream unremembered dreams that quiet my mind and relax my body.

A week in Bonn with my precious daughter Zeytun. I can’t wait to see her and give her a hug. Midday walks along the Rhine and thoughts of Karl Marx, who attended the ancient university in this very city and whose attraction to Jesus as a teenager attracted me to him as a graduate student intrigued by the ethical dimensions of feeling and thought.

At the end of the week, it’s back to Princeton. This is my sabbatical year, but I’m returning to my home university for a joyous occasion: “Ain’t that a Groove”: The Genius of James Brown Conference, the first such academic assembly to take the Godfather seriously, that funkafied genius whose “Get Up Offa That Thing” lifted me high during low days at Harvard. I give the keynote address. I acknowledge that JB is integral to the formation of my spirit and my soul. I say that, like all of us, James was a featherless two-legged linguistically conscious creature born between urine and feces. Like all of us, he was born out of the funk and, like the great Victorian novelist Thomas Hardy, he was still-born. JB was abandoned by both parents, saved by an aunt, raised in a brothel, and yet, through it all—or because of it all—the man managed to transform social misery into artistic delicacies of the highest order. His funk raised us and renewed us. His funk got us through.

Like the peerless Russian writer Anton Chekhov and the matchless Irish author Samuel Beckett, the bluesmen sing of real-life, here-and-now experiences of tragedy and comedy even as they offer up help. They offer up strategies for survival. They share their coping skills. They get us to dancing and laughing, rapping and exposing the hypocrisy of a soulless and sanitized civilization.

Addy's Race by Debby Waldman
Through Her Eyes by Ava Harrison
Worlds Without End by Caroline Spector
Thunder In The Deep (02) by Joe Buff
Jules Verne by Robur the Conqueror
The Protectors Series Bundle (A superhero romance anthology) by Malone, Nana
Divine Justice by David Baldacci
Water and Power by Viola Grace
The Book of Ruth by Jane Hamilton
Resist by Blanche Hardin
Our partner