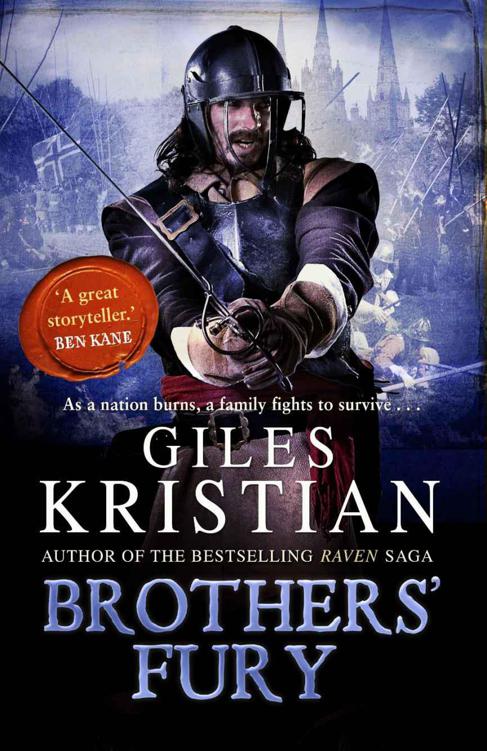 Cast out by his family, Tom Rivers returns to his regiment. His commander believes the young hothead’s contempt for authority has no place in his troop. But to a spymaster like Captain Crafte, Tom’s dark and fearless nature is itself a weapon to be turned upon the hated Cavaliers and used to strike at their very hearts.

Raw with grief at the death of his father, Edmund Rivers rejects the peace talks between Parliament and the King. He chooses instead to lead a band of marauders across the moors, intent on exterminating rebel forces like the vermin they believe them to be. But Prince Rupert recognizes in Mun a fellow child of war and has other, no less daring plans for him.

Her heart broken following the deaths of her beloved Emmanuel and her father, Bess Rivers takes the hardest decision of her life: to leave her son and Sheer House and to go in search of the one person who might help her re-unite her family. Risking her own life on the road, can Bess douse the flames of her brothers’ fury and see them reconciled?

Brothers’ Fury
continues Giles Kristian’s thrilling and acclaimed story of the Rivers family, whose lives are turned upside down by that most brutal and tragic of wars – the English Civil War. . .

A Q&A WITH GILES KRISTIAN

Brothers’ Fury
is for Lynne and Andrew, whose support for the cause means so much.

‘Thou wouldest think it strange if I should tell thee there was a time in England when brothers killed brothers, cousins cousins, and friends their friends. Nay, when they conceived it was no offence to commit murder.’

GOD ALMIGHTY, IT
was cold. A little after midday, yet the pallid sun clung to the horizon, throwing the riders’ shadows far ahead of them in spindly misshapen caricatures that seemed to gush across the ground like black water. The night’s frost still held the land in its frigid grip, whitening tussocks and heather, sheathing leafless branches and making a hoary-haired old man of the peat moor. It was a white, silent, frozen world, and it was empty.

But for the passing of a small troop of horse.

Mun – Sir Edmund Rivers when he was not out on patrol with his men – twisted in the saddle, blinking watery eyes against the biting air. Cocooned in cloaks and hunched into themselves as though protecting some feeble flame that yet flickered within their chests, the men of the column resembled corpses swathed for burial and lashed to saddles. But for a slight sway as their mounts trudged on, they barely seemed to move, all flesh trussed up leaving only the eyes visible, and even these were slitted defensively, so that Mun could not read their thoughts.

Not that Mun needed to see their eyes to know their minds.
He supposed they resented him for leading them across the empty, bitter-cold moorland when all sensible folk were inside by their hearths. Even the great armies of Parliament and King had, for the most part, settled in for the winter, Essex’s force at Windsor and Charles’s at Oxford, that city having become for all intents and purposes the seat of his court and the Royalist capital. And yet not all had sheathed their blades and let their match burn out, and Lancashire remained a battleground upon which Parliament was seeming to press the advantage.

There were still powerful men waging the King’s war here in the north-west, Mun knew. Men such as Richard Lord Molyneux, the wealthy Thomas Tyldesley, and the most powerful of all, James Stanley the Earl of Derby. But the earl had been deprived of his best regiments for service with the King elsewhere and had been forced to abandon his siege of Parliament-held Manchester the previous October. Now his forces had consolidated around Preston and Wigan and had made their headquarters in Warrington, just twenty miles south of Shear House.

Meanwhile the rebels were growing bold. They were recruiting.

And Mun was hunting.

‘Winter either bites with its teeth or lashes with its tail, my da used to say,’ O’Brien, riding beside him, muffled into the cloak covering the lower part of his face, ‘but this whore-hearted bitch has had us with her claws too as she’s walked across our backs.’ The big Irishman pulled the cloak down and dragged a sleeve beneath his nose, breath pluming in the cutting air. ‘No bugger’s daft enough to be out in this.’

Mun would have wagered that every trooper in the thirty-six-strong column was thinking the same, but only O’Brien had the nerve to say it.

‘
We’re
out in it,’ he said, watching rooks and jackdaws rise and dip across the heath, foraging amongst the frosted clumps
of bilberry and heather, feeding if they could, making the most of the scant daylight hours.

‘Aye and what does that make us?’ O’Brien muttered to himself.

‘Would you rather be a lapdog or a wolf?’ Mun asked, the cold air hurting his teeth.

‘On a day like this I’d be a bloody cat,’ O’Brien said, ‘all curled up on some pretty wench’s lap by the fire.’

Mun smiled grimly at that image, for O’Brien was a giant of a man, red-haired, red-bearded and in battle as savage as this long winter’s claws. Twice as dangerous too. But the Irishman was right about the cold and Mun had not known a harsher winter. He recalled something his own father had once said, that in winter every mile is two, and watching the scavenging birds he decided not to range too many miles more before turning for home. Perhaps an hour had passed since they had skirted the town of Longridge above the Ribble river, eight miles north-east of Preston, and now they were at the fringes of the Forest of Bowland and the fells were no place to be after dark, especially in weather like this. Mun knew the black moor could swallow their whole column, freezing man and beast as solid as the rocky outcrops and gritstone boulders that tore through the wild heath, and no one might ever find them.

We’ll turn back at Deerleap crag, he thought, if we have caught no sight of the enemy by then. But the damned traitors were out there somewhere and he hungered to find them, would have that rather than all the warmth and comfort Shear House – his home and the Rivers family seat, Royalist bastion and now headquarters for his own operations – could offer.

‘Just a little further,’ he called over his shoulder, receiving no answer but for a loud snort from one of the horses that was eloquent testimony as to what they felt about being out on such a day.

‘As much as I enjoy giving the rebel turds a good hiding, this should be down to Derby, not us,’ O’Brien said, hawking and
spitting a thick gobbet into the snow. ‘We can’t be more than nine, ten miles from Preston. It’s those buggers should be out here freezing their balls off instead of sitting around scratching their arses.’

‘True enough,’ Mun said, ‘but the earl and the other commanders are more concerned about the lightness of their purses and the gaps in their ranks than they are about waging proper war. And while they fret, the rebels recruit. They reinforce. Get stronger. Our lads were given a good kicking on Hinfield Moor, booted out of Leigh, and then earned a bloody nose for their troubles when Sir Gilbert Houghton tried to retake Blackburn.’

‘Aye, well that was a wet fart of a thing,’ O’Brien said. ‘I heard Sir Gilbert gave up the siege so that his men could eat their Christmas pies at home by their own hearths.’

Mun could not tell from his tone whether the Irishman thought that was deplorable or admirable. He suspected the latter. ‘Whatever the reason, they’re not fighting,’ he said. ‘And if they’re not fighting they’re not winning. But I promise you this, Clancy, the rebels are not safe. Not even in this Godforsaken weather. Not from us. Not from me.’ Gloved fingers instinctively caressed the curved butt of the twenty-six-inch-long firelock pistol holstered on the right of his saddle’s cantle. The weapon’s twin nestled snug in its leather sheath on the saddle’s other side against his left thigh. ‘We’re going to find them,’ Mun said, watery eyes ranging across the frosted land, ‘and we’re going to kill them.’

‘Aye, I suppose that would be agreeable. There’s nothing like a bit of a fight to stir some heat into the blood,’ O’Brien said. ‘And the boys will play the part, won’t you, lads?’ he called over his shoulder, his helmeted head wreathed in his own fogging breath. A few mumbled ayes rose from the column but most of the swaddled troopers kept their hot breath inside their chests, shoulders hunched, heads pulled in. The column comprised the best riders and most capable men from Shear House’s garrison
and, though most were relatively inexperienced, they were fit, healthy and strong.

‘Men learn quickly in war, my lady,’ Major Radcliffe had assured Mun’s mother when she had voiced concern at Mun leading them out into winter’s savage maw to track and kill rebels. ‘Sir Edmund is proof of that.’

‘We have all been changed by this war, Major,’ Lady Mary had said, and Mun had avoided her eyes then, not wanting to see the sorrow in them.

‘They may be miserable as bloody Puritans in a brothel, but they’ll sing loud enough when the shooting starts,’ O’Brien assured Mun now, snuffling back down into his cloak.

‘Like avenging angels,’ Mun muttered, remembering the day he and Captain Smith – now Sir John Smith – had brazenly ridden back onto the killing field at Edgehill and wrested the King’s colours from a well-armed knot of Roundhead soldiers. A Catholic and not shy to admit it, Smith had announced to a group of dragoons that he and Mun were two of St Michael the Archangel’s soldiers come with swords of fire to smite God’s enemies.

And smite Mun would, for the rebels had destroyed his family. His father was dead, slain at Edgehill, as was Mun’s good friend, his sister Bess’s betrothed Emmanuel. Then the traitors had besieged Shear House and killed many of its defenders before Mun could break the siege, the scars carved into the house by their demi-cannon serving as a constant reminder of that desperate episode. Added to all this the feckless enemy had recruited his brother Tom, meaning that Tom and he were now foes, and this had ripped the heart out of their once proud family. It was a wound that would not, could not heal. And for all this the rebels would pay in blood. Which was why Mun had not returned to his regiment despite having given his word to Prince Rupert that he would join him as soon as he and the mercenary Osmyn Hooker had raised the siege of Shear House.