Brown: The Last Discovery of America 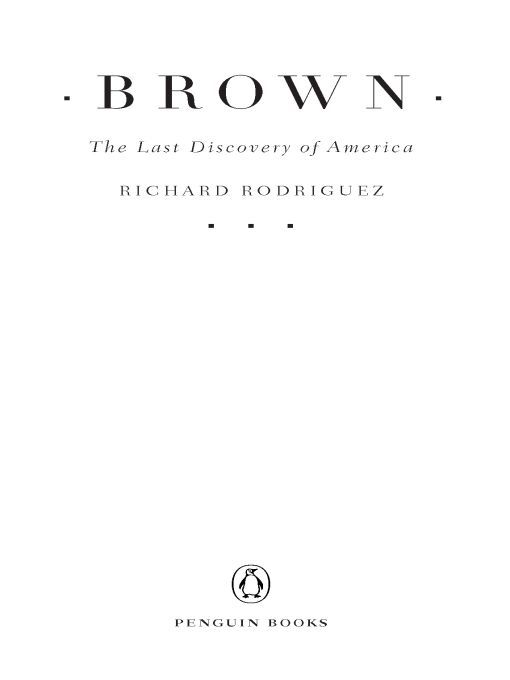 Table of Contents
Title Page
Copyright Page
Dedication
Preface
Chapter One - THE TRIAD OF ALEXIS DE TOCQUEVILLE
Chapter Two - IN THE BROWN STUDY
Chapter Three - THE PRINCE AND I
Chapter Four - POOR RICHARD
Chapter Five - HISPANIC
Chapter Six - THE THIRD MAN
Chapter Seven - DREAMS OF A TEMPERATE PEOPLE
Chapter Eight - GONE WEST
Chapter Nine - PETER’S AVOCADO
Acknowledgements
Praise for
Brown
and Richard Rodriguez
“Rodriguez is an original thinker, an astute observer and an uncommonly gifted writer.”
—The Atlanta Journal-Constitution
“As a writer Rodriguez has his own linguistic bravado, which strikes off images with the brio of a Shakespeare and the wicked humor of a political cartoonist.”
—Buffalo News
“Challenging, eloquent, witty, and searingly beautiful.”
—Booklist
“
Brown
provides a powerful argument for our need to re-imagine place and race alike as we enter this century.”
—Winston-Salem Journal
“This book resonates with beautiful prose and such deep insight that it should be required reading for all those intrigued by our human condition.”
—New York Sun
“Rodriguez offers the reader one of the most provocative and compelling descriptions of what he calls the ‘browning of America.’ ”
—Accent
magazine
“Beautifully written and well-edited,
Brown
has matured from the raw juice of observation and become a rather fine wine.”
—National Post
(Canada)
“The works in
Brown
are not neat little patterned exercises pointed toward a conclusion. They’re chewy like Emerson’s; they pop with firecracker insights like D.H. Lawrence’s.”
—The San Jose Mercury News
PENGUIN BOOKS
BROWN
Richard Rodriguez works as an editor at the Pacific News Service in San Francisco and is a contributing editor for
Harper’s
magazine and the Sunday “Opinion” section of the
Los Angeles Times
. He appears regularly as an essayist on the
NewsHour with Jim Lehrer
on PBS. He is the author of
Hunger of Memory
and
Days of Obligations
.
ALSO BY RICHARD RODRIGUEZ
Hunger of Memory: The Education of Richard Rodriguez
Days of Obligation: An Argument with My Mexican Father