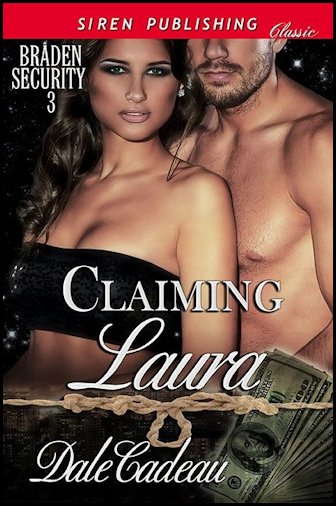 Clay, the tattooed senior member of Braden Security, meets Laura in the very vanilla side of the Vanilla Spice Playground while helping his friend and owner of the club. Intrigued when he first spots her coming into the bar, he sets out to meet her by sticking his foot out and trips her right into his lap. Laura is very attracted to Clay, but Clay’s overly protective manner and a secret from her past interrupts their budding relationship.

Laura has been working and living under an assumed name for the last 5 years in Detroit. As her secrets are unraveled it comes to light that the general involved 10 years ago with the dishonorable discharge of Clay’s unit from the army, is the same person that Laura has been hiding from. All the men of Braden Security band together to keep Laura safe and bring the General down at the same time.

If you have purchased this copy of
Claiming Laura
by Dale Cadeau from BookStrand.com or its official distributors, thank you. Also, thank you for not sharing your copy of this book.

To my mom, my daughter, and husband, for their continued support.

Laura sat in front of her bedroom mirror and combed out her long black hair. She had decided that five years was long enough with her hiding the hair that she took such pride in. It had been a dull brown for so long that the people in the office and her friends thought that was her original colour. She had recently dyed it back to the deep black.

She had decided it was time that she started really living again.

Finally she was starting to feel safe. It had been ten years that her life had not been her own. Two of those years were spent under the watchful eye of the Feds in a witness protection plan. She soon found out that they could not keep her safe when the small bistro that she worked at was firebombed and her apartment ransacked. Not waiting around for the Feds to move her to another small town, she took off on her own.

After moving from town to town, she had finally landed in Detroit. She had now lived five years in the city and had gotten a job at an accounting firm. First, just as an assistant, as she couldn’t produce any references, but gradually she was able to prove her skills, and now she had her own accounts that she worked on.

The accounting firm had a good computer server system, so now it allowed her to work at home on her laptop, only going into the office when needed. This also kept her out of sight and not on display as other jobs would have.

She was getting ready to go out for her birthday with the girls—Jane, Sela, and Cathy. She had met them in the cafeteria of the large office building that housed the accounting office and other businesses in its tower. She played cool at first, not wanting to make friendships that she might have to leave behind at any moment. But the girls had persevered and now they were her best friends. Along with her small house, which she had bought, allowing herself to put down some roots, these were the only luxuries she allowed herself.

The girls should be here any second to pick her up for the birthday celebration that they insisted on. Laura had tried to talk them out of it, but knowing them, anything to celebrate and go out on the town was not going to be put off. She didn’t know why they clicked. The girls liked to party while she had to stay in the shadows and didn’t accompany them many places. Maybe it was because she wished that she was free to enjoy herself like other women her age.

She was expecting to go to the local diner tonight that they usually went to. It was never crowded and small enough that Laura felt that nobody would ever think to look for her there, so she felt safe and could enjoy herself. When the girls arrived with a limo, Laura was stunned. She questioned them as she let them in the door and into the small hallway. “Aren’t we just going out to dinner at Frank’s like we always do?”

“No way, not tonight. I got some guest passes from a fellow co-worker for the new club that just opened out on the edge of the warehouse district. We are going to check it out, and maybe we’ll all get lucky,” Jane told her with a carefree laugh.

Laura asked, “And who decided this was a good idea? We don’t know this club and it seems like a long way to go when we don’t know anything about it. Why don’t we stick with Frank’s? We know it, and it’s just around the corner.”

“We thought of that. That’s why there is a limo outside waiting for us. You know us well enough to know we like to have a good time, but would never drink and drive. Remember my friends Jeff and May that I told you about from high school? They thought they were indestructible. Well, they weren’t. I don’t forget that time in my life. Drinking and driving is just crazy.”

Laura walked over to Cathy and gave her a hug. “Yes, I just forgot for the moment that you had lost friends in high school from liquor.”

“OK, guys!” Jane said as she opened the door for them to leave. “Let’s get this show on the road. The night is young just like we are.” At the other raised eyebrows Jane amended, “We are all great women and the best years are still to come.”

“Come on, people, we are celebrating.” With that, Jane ushered Sela and Cathy out the door then turned to Laura and grabbed her hand and followed them out.

Pulling the door shut behind her and locking it, Laura had to smile to herself.
This is going to be some evening.
Catching herself, Laura sobered as she remembered that she still had to be aware of her surroundings. She could enjoy the evening but had to be on guard, especially at a new place.

Jane looked back and remarked, “Smile, Laura. When you frown it make you look older than what you are. Tonight we are as young as we want to be.”

Cathy led the way and they all bundled into the limo.

It took the happy bunch thirty-five minutes to reach the outskirts of town and the large club that was housed in a warehouse. Laura did not discover until halfway there that Cathy had hidden a bottle in the limo. Not wanting to disappoint her friends, Laura indulged in a drink. She didn’t want to be the spoilsport of the party.

The sign on the building declared that they had reached The VSP Playground. What do the initials stand for? Laura pondered as they all pilled out of the car.

Walking to the front door with her friends, Laura looked at all the cars already in the parking lot. “I thought you said this was a new place? If that’s so, they are really doing great business.”

Jane walked up the steps past her and held the large door open for them as she gave Laura a half smile. “Maybe they serve up something different? Let’s go find out.”

Made to Love by Medina, Heidi
Pride of Carthage by David Anthony Durham
BLUE ICE (ICE SERIES) by Soto, Carolina
Secreto de hermanas by Belinda Alexandra
Heart's Safe Passage by Laurie Alice Eakes
Tripp by Kristen Kehoe
Last Chance To Run by Dianna Love
The Power of Un by Nancy Etchemendy
The Princess and the Cop by R L Humphries
Red by Kate Kinsey
Our partner