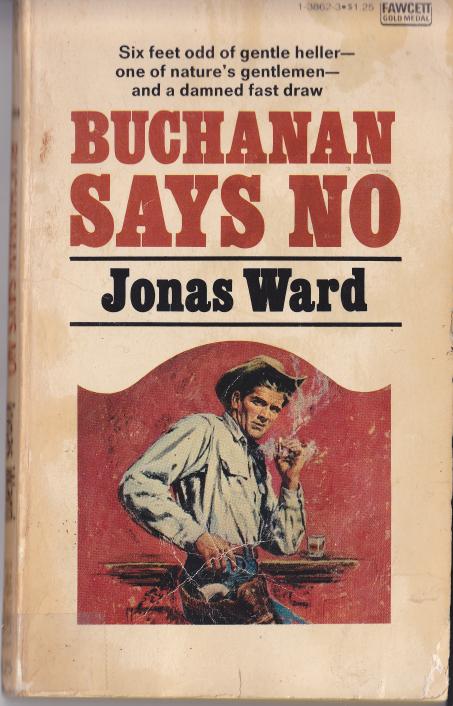 All night long they had driven the stolen herd so that they could reach the rendezvous at the appointed time.
Once there, they had pitched "last camp' a haphazard,
temporary arrangement, and then proceeded to wait for
the money man throughout that long, hellish, breezeless
day. Now it was night again, with a thin crescent moon
hanging in a cloudless sky, and there was no relief from
the oppressive heat that bore down on them between
the steep canyon walls. It was night and still they waited.

Four of them sat cross-legged beside the cooking fire, playing a listless, meaningless game with what cards still
remained from the dog-eared deck. They were rough men, hard
-
cases, and when the flickering light touched their be
grimed, beard-stubbled faces, it revealed in all of them the
same tense and brooding restlessness, an Impatience that
was surly, dangerous.

Two others prowled aimlessly about the campsite on
foot, pausing out of habit to watch the bored progress of
the poker, then moving away again, carefully avoiding
each other in the shadows, seeming not even to acknowledge another presence. They walked, separately, from the
fire to the canyon's mouth, stared out over the black,
craggy land, and silently cursed the man who hadn't ar
rived with their money.

The chuck wagon stood off to one side, and out of
sight of those by the fire someone was braced against a
wheel, drinking stolidly from a tin cup that he filled and
filled again from a jug hidden within the wagon itself. This
was Durfee, the trail boss, and the jug had been originally intended as a
Johnny
-go-round marking the end of this
unorthodox and nerve-shredding drive.

But Frank Power had slipped up, for the first time that
Durfee could remember. The Major was a lot of things, but above all else he was on time with the payroll. This was the day they'd agreed on, this was the place, but no
sign of somebody named Boyd Weston, the jacko packing
their money this trip.

Durfee's own mind, though, had been timed to a release
from the hardships and the pressures of the long journey.
It was as if, back there in Yuma, a fuse had been sparked inside him, a fuse set for forty days, no more, no less, and
this was the fortieth day. Hardly had the sun set when
Durfee edged over to his precious cache in the ch
u
ck
wagon and began the serious process of unwinding.

But he had to get drunk with care, soddenly but fur
tively, for though he had hand-picked every man out there,
commanded them absolutely, he also knew them for the
natural type they were, knew how such a natural thing as
whisky could bring on a mutiny.

Durfee filled the tin cup again, drank from it with the solid conviction that whatever he did was for the crew's
own good. He d
ran
k
,
also, with no concern for the safety
of the cattle. Buchanan would take care of the herd
for him.

And that Buchanan would, with or without supervision
from the drover. He was
;
in fact, just finishing a two-hour
night-tending stint in the saddle, bedding the fretful ani
mals down at a time when they were accustomed to be
on the move. The late watch had the duty now, relieving Buchanan and his sidekick
,
Sandoe, for chow. Both men
were surprised to find Durfee lurking at the wagon but
made no comment as the
y
secured utensils and helped
themselves from the cooking pots at the fire. There was no
talk between them, no greeting from the card players,
and they moved off into the darkness to eat their supper,

Buchanan shook his head without breaking the thought
ful gaze leveled at the chuck wagon
.

"Some lousy night this is going to be
.”
Sandoe said
then. "Don't suppose you got the makings?"

It was asked unhappily, more a statement of sorry fact than a question. But Buchanan reached into the torn pocket of his thread
bare shirt, pulled out a depleted tobacco pouch, and
passed it over. Sandoe pinched the slim contents between
his fingers.

A six-footer himself, well blocked, Sandoe still had to look
op when he spoke to Buchanan. And he looked up to him
in other ways besides the purely physical. He didn't under
stand why he felt this deference, wasn't even sure how he
stood in the other man's eyes. It was very unusual, this atti
tude he took, almost improbable, for at twenty-six Mike
Sandoe was a gunfighter with an earned rep, a some
body in his own right. Yet he treated the thirty-year-old
Buchanan with a regard he had never accorded any other.

The warrior didn't know quite why. In a special crew like this one of Durfee's, where every man lived by the
gun, Buchanan went unarmed except for the rifle in his
saddle. In a hard society where notoriety was all, Bu
chanan's exploits—if they even existed—were completely
unknown to the rest. And though this was the stranger's
first drive with Durfee, it was obvious that Buchanan was
more a veteran of the trail than most of those who had
ridden for him from the start. From the very first Durfee
passed on responsibility to the newcomer, delegated au
thority to him, and this was accepted by all hands as a
natural thing. Buchanan was just that kind, Sandoe de
cided weeks before, settling the matter in his mind.

"Save this for the cat
,”
he said now, handing back the tobacco pooch, Buchanan accepted it absently, his atten
tion still focused on Bill Durfee at the wagon. Then his
body suddenly straightened to its full height and he moved
away, advancing lithely in that direction. Sandoe's voice called after him questioningly, but Buchanan strode on without answering. Durfee wasn't aware he had company
until the dark ominous-looking figure was looming above
him. The trail boss lifted his battle-scarred face with a
start.

"You're half Apache
.”
Durfee
complained
his speech
an uneven growl. "Whatta you want?"

"Nine o'clock's come and gone, Bill
.
”
Buchanan
said
the sound of it good-natured, deceptively mild in the
night.

"Tomorrow's another day
;
Bucko
. Now go away and let
me be."

"The deal ran out tonight, Bill. I want my wages."

"He'll bring your money in the morning. First thing
,”
Durfee turned his back, dismissing him with the ges
ture.

"This morning
,”
Buchanan said patiently, "you told me
he'd be here this afternoon. This afternoon you said he'd
be here by nine o'clock."

"Can't you see I'm busy, man?" Durfee said sharply,
his voice carrying to the fire, halting the game there. "Go
take a walk for yourself in the moonlight,"

"I'm taking a ride for myself," Buchanan said,

Durfee twisted his head around, eyes blazing, looking in
that moment like an enraged bull. "You're what?"

"I'm going into town," Buchanan told him easily, "Into
Bella."

"And I'll need the lend of a mount. You'll find him in
the livery when you get there."

"You ain't goin' no place! You especially ain't goin
’
into Bella!" Now the crew was converging on the chuck wagon,
lured there by the spectacle of someone actually courting
the terrible wrath of Bill Durfee.

"A deal's a deal, Bill." Buchanan went on, speaking as
though this were nothing more than a reasonable con
versation. "I agreed to help push these beeves as far as In
dian Rocks, which is where we've been since dawn this morning."

"And where we'll still be at dawn tomorrow!"

"I agreed to work for ten dollars a day."

"And to spend the money anyplace in the Territory but
the town of Bella!"

""W
h
ich just happens to be where my money is," Bu
chanan said.

Durfee's black-browed head sank threateningly between
his
massive shoulders. "You implyin' a double-cross,
mister?" he said heavily, and the onlookers tensed ex
pectantly.

"'Well, Bill," Buchanan said with a disarming grin, "you
got to admit that there's none of us in this operation you
could strictly call deacons of the church."

Durfee swung on him from the heels. Buchanan slid
under the roundhouse and put his face up close to the
other man's,

Durfee tried a second time, with his thick knee. Bu
chanan hip-blocked it, got his own tremendous hand be
neath the knee, and lifted abruptly. The trail boss went
over backward and down with a jarring fall. Buchanan
looked down at him, his own rough and battered face
keenly apologetic.

"A hell of a poor way to part company, Bill," he said
regretfully, and turned away. There was a sharp commo
tion behind him, punctuated by Mike Sandoe's ragged
command:

Buchanan swung around to find Durfee risen to one
knee,
h
is hand frozen to the butt of the half-holstered Remington while his eyes balefully regarded the long-
barreled Colt that Sandoe leveled directly at his wishbone.

"I gave you the benefit of
the
doubt
,”
Buchanan said
with
a
kind of sorrow. "I never figured anybody in this
crew
for
a
back-shooter
.
"

Durfee climbed back to
his feet, his face
sullen.

"No
man that works for me sets foot in Bella," he said truc
ulently. "That's the strictest order in the books."

"I quit
working for you at nine o'clock
,”
Buchanan
said,
"So that
makes it
all right
.”

"I guess I
quit, too, Durfee," he said, backing toward
Buchanan
and using both handguns to discourage anyone overly loyal to the drover. Darkness swallowed both men
and then they
were saddling fresh horses from Durfee's
meager string,

"You
s
u
re you want to come along?"
Buchanan
asked
when they were mounted.

"You
moved pretty quick back there,
kid.
Much
obliged."

They
rode on without further
conversation, and
for
Buchanan's part, he was glad that
the break with Durfee
had been final and unsentimental. Forty days ago he'd
never laid eyes on the hot-tempered little ramrod, only
met him then after a slight,
disagreement.
It was down in Yuma, in a bar in the Mexican quarter
that was not only a cool refuge from the desert sun, but
the cheapest oasis in town. Durfee had come in
with
two other riders,
and one of them had promptly objected to
the dark-eyed
girl filling Buchanan's lap. According to him,
Buchanan was claim-jumping. And
when
the girl kicked
her bare foot at him, and insisted in down-to-earth Spanish that she was comfortable where she was, why, a fight just
naturally
started.