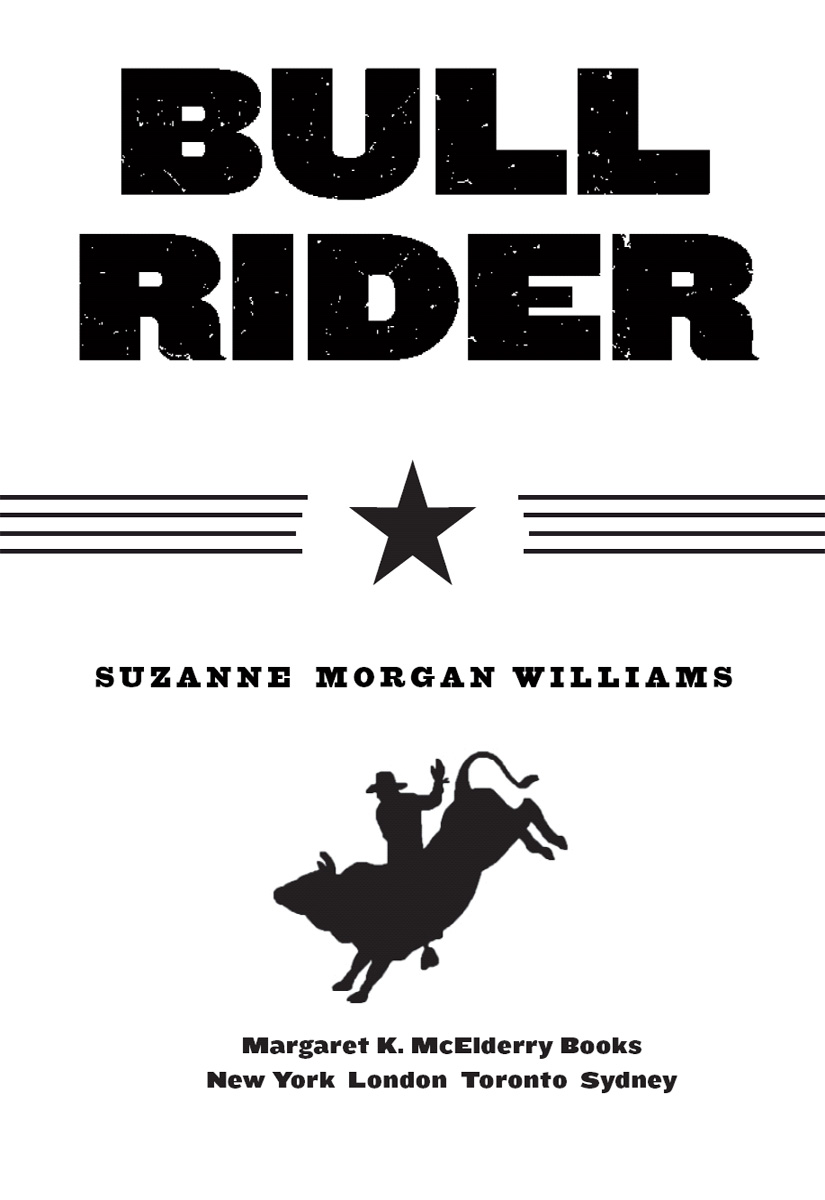 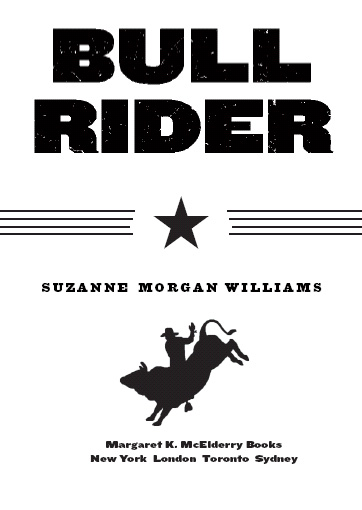 Margaret K. McElderry Books
An imprint of Simon & Schuster Children’s Publishing Division
1230 Avenue of the Americas, New York, New York 10020 This book is a work of fiction. Any references to historical events, real people, or real locales are used fictitiously. Other names, characters, places, and incidents are products of the author’s imagination, and any resemblance to actual events or locales or persons, living or dead, is entirely coincidental.

Summary: When his older brother, a bull-riding champion, returns from Iraq partially paralyzed, fourteen-year-old Cam puts away his skateboard to enter a $15,000 bull-riding challenge to earn money to help his depressed and rehabilitating brother pull his life back together.

To my husband, Reed, for his constant and
sustaining support, and to the troops who served
in Iraq and Afghanistan and their families.

F
olks in Salt Lick say I couldn’t shake bull riding if I tried. It’s in my blood, my family. Around here, any guy named Cam O’Mara should be a bull rider. But if you’ve ever looked a sixteen-hundred-pound bucking bull named Ugly in the eye and thought about holding on to his back with a stiff rawhide handle, some pine tar, and a prayer, well, you’d know why I favored skateboarding. My grandpa Roy, my dad, my brother, Ben, they could all go as crazy as they liked, sticking eight seconds on a bull for the adrenaline rush and maybe a silver buckle. But me, I’d take my falls on the asphalt. I’d master something that I could roll under my bed when I was done with it. Or so I thought.

It was June and my big brother, Ben, was home on leave from the Marines. He started in on me about the skateboarding. “Cam, I’m gonna break that thing and then you’ll have time for something really extreme.” Ben’s five years older than me, which is enough difference to mean he
didn’t beat on me the way some older brothers do, but he wouldn’t leave me alone, either. “When are you gonna stop being some wannabe skater punk and do rodeo?”

“About when your head pops off and rolls down the street like a soccer ball.” I jumped toward him like I was going to knock his head across our room with my knee. He faked right and punched me in the stomach. I smashed into him with my shoulder, and we both fell on the floor to wrestle. It took Ben about four seconds to pin me and press my face into the rug. I spit wool hairs out of my mouth.

I never give, and he knew it, so he held me down until he was tired of it, and then he slapped me on the back and let go.

“You coming in early with me to the rodeo?” he asked.

“Sure,” I said, getting up and trying not to favor the shoulder he’d had a lock on. It was weird to have Ben home again. I’m not saying it was bad, it was good. It’s just his hair was buzzed from being in the Marines, and without his cowboy hat, he seemed stiff and different. Maybe the year overseas had changed him. But when he pulled the hat on, well, there he was, my brother, Ben, again.

See, Ben’s a cowboy and so am I, I guess. I mean, I help out on the ranch with the cows. But Ben’s a
cowboy
. That’s his thing. He was Nevada State High School Bull Riding Champion and all. And I really was glad he was home. The timing couldn’t have been better. School was out, and the rodeo at the Humboldt County Fair was on. Grandpa Roy’d put in the money for an entry—it was enough for a new
skateboard for me, but that wasn’t in his plan. “I know Ben doesn’t have much time at home, but what else would he want to do but get in the bull ring? He’s an O’Mara, and we’ll give him the best we can while he’s here.”

So, Ben was bull riding again—like he’d never been to Iraq at all. Even my six-year-old sister, Lali, knew that was big. She’d been bouncing around all day, asking when we were going. It was almost time, and now that Ben was done squashing me, he rummaged in his drawer for his lucky socks. He’d worn them the first time he won at bull riding, and now he wore them every time there was a prize on the line.

“You don’t need those socks, you know,” I said.

“You’re sounding like Mom. And what makes you the expert? Did something change when you turned fourteen?”

“You can ride any bull, just like Grandpa. I’m just saying you don’t need luck.”

“I can always use some luck.” He grinned at me.

Now that was funny. I’d never known anyone as lucky as Ben. He got the good looks and the bull-riding gene—there has to be one in this family—and, geez, he was already grown-up. That counted for something. Me, come August, I had to face Mr. Killworth, “the knucklecruncher,” in ninth grade. That’s my luck.

Ben found his socks and pulled them on. They looked regular enough—gray work socks—but he’d worn the fuzz down to a shine on the bottoms. That’s what happens when you wear lucky socks enough times. Next came the boots. Those took some serious tugging. Then he reached for his belt with the champion buckle.

“Remember when you won that?” I asked.

“I carried your bull rope.”

“And I wore my lucky socks,” he gloated.

I threw a cushion at him.

At the fair, Ben’s luck just kept flowing. Even the weather was good. The thunderstorms that had been predicted held off, and the stands were full. Dad bought pop and ice cream for us, and Lali about jumped out of her skin, waving at the girls in their satin shirts and bright new jeans who galloped in carrying the flags. I was wired up, counting the minutes till the bull riders and Ben’s go-round.

His first bull was young and wanted to run around the ring instead of bucking. But he got a reride. The second time he drew Son of Ugly. Now,
that’s
a bull to score you some points. ’Course he wasn’t as mean and nasty as his sire—they say no one’s ever rode Ugly. But the offspring gave Ben a wicked ride, hopping and twisting and kicking up a dust storm. Ben made his eight-second time and sailed off.

The high school girls covered their eyes and shrieked when Ben landed. The guys slapped him on the back, and he disappeared behind the chutes, king of the bull ring. It was almost enough to tempt me onto a bull, but not quite. Ben was the champ. He was the one Dad and Grandpa bragged on to their friends, not me. He could have it. I wasn’t him, and I wasn’t going to try to be.

I pushed my hair out of my eyes and spotted Mike Gianni, my skateboarding buddy, and Favi Ruiz in the stands. I jumped a rail to get over to them.

“Cam’s smarter than that,” Favi said.

“That’s my point.” She looked at me like she’d won something. Favi’s father was foreman on our ranch, and they lived next door to us in the Old House, where my Grandpa Roy was born. I’d known her all my life—like a sister, almost.

“Best around,” I said with a grin.

“Except for me. How much longer is Ben in town?”

I blew some air out of my mouth and shook my head. “A couple more days.”

“Yeah, it is,” I agreed. At my house no one talked about when Ben was going back to Iraq. But now I’d said it. Two more days.

On the way home, I rode with Ben. The windows were down and the air blew around us, warm and sweet smelling from the sagebrush.

“You ought to start riding,” he said.

“Well, it should be. You could be one terrific bull rider.”

“Naw,” I said. “Not like you and Grandpa. You almost
won and you haven’t been on a bull in a year. Second isn’t bad.”

I laughed and pinched my nose. “Yeah, it’s that lucky smell.”

“Man, those socks smell lucky
and
sweet,” he said, and we laughed until I snorted. When we settled down, the night seemed extra quiet. The tires hummed on the pavement, and after a while a pack of coyotes got to yipping as we drove by.

“So, why do you have to go back?” The question stretched out between us. O’Maras don’t talk about uncomfortable stuff. The coyotes wound themselves into a frenzy—howling and yelping till my skin bumped up.

Ben ran his hands up and down on the steering wheel. “They extended everybody. You know that. I’ve got three more months.”

“Lil’ bro’, I might sign up for another year in Iraq after this. I’m thinking about it.”

“Why?” I stared at him. “I thought you were coming home. You’re gonna win big money on the pro circuit and take it and raise bucking bulls. That’s what you’ve always said.” Ben had run on a hundred or so times about his plan to me and Dad and Grandpa. O’Mara Bucking Bulls—that was his dream. So, I hadn’t one clue as to why he’d want to forget all about it, about us, and be gone for more time over there.

“There’s guys that need me. They’re short on replacements.”

“Somebody else can do it. You’re a bull rider.”

He looked at me like I was just a little slow. “I’m a Marine, and like I said, guys need me.”

“Well, make them give you some extra armor or a desk job or something.”

“Don’t need it. My guys got my back.” He put a stick of clove gum in his mouth and held the pack toward me. “So what’d you think of that Son of Ugly?”

“He looked like a Sunday picnic kind of a bull to me.”

Ben reached over to grab me, but this time I ducked. The truck swerved and Ben swung it back and forth a couple times across the empty road, and we laughed till it hurt.

Two days later, Mom and Dad drove Ben in to Reno and he flew back to Iraq. Mom started marking the ninety days off on the kitchen calendar. Dad ran the video of Ben’s high school championship ride again. There was Ben hanging on out of the chute, hand up, bull spinning. You can’t exactly see his face on account of the hat, but I knew what it looked like. It looked just like it did when he whooped me at wrestling or when he beat me racing our horses and looked backwards over his shoulder and grinned a long, long time. I knew that look by heart, so I slipped outside with my dog, Red, and my skateboard.