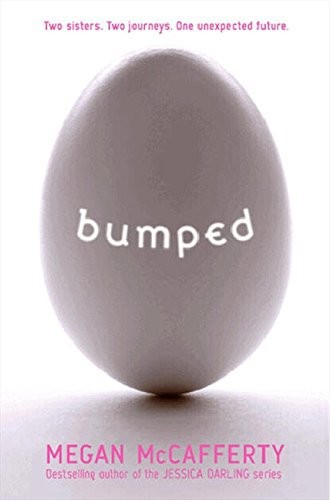 For Caitlyn, Carly, Cailey, and Zoë—
when you’re old enough

The United States of America once ranked above all industrialized nations in the realm of teen pregnancy. We were the undisputed queens of precocious procreation! We were number one before, and we can be number one again!

—President’s State of the Union Address

I’M SIXTEEN. PREGNANT. AND THE MOST IMPORTANT PERSON
on the planet.

According to the Babiez R U ad, anyway.

“You’re knocked up,”
sings the girlie chorus.
“Ready to pop. Due to drop.”
The sixty-second jingle loops continuously in the dressing room.

I check the MiNet to make sure no one I know is shopping in this wing of the Meadowlands Mallplex. Most of my friends are still in bed sleeping off last night’s Tocin hangovers. I’m safe.

Free from neggy eyes, I could act just like the fat and happy models in the commercials. I could shout, I could shimmy, I could show off every pound of my, um,
abundant awesomeness
. Such gushing doesn’t come as naturally to me as it does to other girls. I have to work harder at it, the way my friends struggle to solve calculus equations that are easy for me. Preparing to pregg is a full-time job with no days off—but I don’t have a choice. Not when there’s so much at stake.

Rubbing my spectacularly distended belly, I want to try out an expression just to hear how it sounds coming out of my mouth.

My whole body sags under the weight of my sigh. I’m supposed to
own
my pregnancy because my
extra sixty is oh so sexy
, but I’d die of embarrassment if anyone I know caught me striking poses like this—especially Zen. So I guess it’s a good thing that my best friend has made no effort to see me lately.

“Went forth and multiplied. Fightin’ the omnicide . . .”

I check once more for anyone I know, then blind my MiNet with a blink-left-right-left-wink-double-blink. The song is wrapping up—
“You’re the most important person on the plaaaanet. . . . Babiez R U!”
—when I’m startled out of my reverie by the sound of my own voice.

I LOVE THE MEADOWLANDS MALLPLEX!

It’s fast and loud and bright and buzzing with temptation but that’s why I love it. I love it because there’s no better place for me to do the work I was born to do: to spread the Word. Everyone in Goodside is already on message, but here there’s an endless supply of sinners going down the wrong path. It’s dizzying trying to decide who to witness to first. Or rather, next. After Melody.

I’m here because I lost my best veil. It was so silly, really. I didn’t tell Melody the whole story because I was afraid she’d laugh at me, or compare me to a happy puppy as Angel did after she calmed down when she saw that my stunt on the bridge hadn’t done anyone any harm.

Angel is the driver I called to take me to Otherside. I don’t know if that’s her name or not, but I like to think that it is. I had seen the billboard on Route 381 a few months ago, the last time it was my turn to leave Goodside
to sell my fruit preserves at the Fayatte County Farmers’ Market.

The LORD will watch over your coming and going.
Psalm 121

A pair of wings sprouted from the shoulders of the
A
in “Angel.” It wasn’t difficult to commit the ad to memory, though I’m not sure why I did. At the time, I didn’t know about Melody and had nowhere else to go.

Angel isn’t in the Church but she does have God, which is as blessed as you can get in Otherside. She pulled up promptly at four a.m. and was full of the spirit despite the short notice, early hour, and her advanced age. Her white hair was cropped like a newly shorn lamb’s, her skin the warm brown of a biscuit ready to be taken out of the oven. With her crinkling eyes and ready smile, I trusted her immediately. Even more so when she asked, “Are you ready to let go and let God?”

I liked that. It reminded me that I wasn’t leaving my faith behind, it’s always here with me.

“I am!” I said, buckling myself into the backseat.

If paying someone to take me from Goodside to Princeton sounds indulgent, you’re right. But I don’t know how to drive and have no access to mass transit maps and schedules and once I decided to leave I really didn’t have any time to waste on figuring it all out. I made the right choice because Angel said it would’ve taken me sixteen hours and four transfers (bus, bus, train, train, shuttle bus) to travel three hundred miles. I might have made it past the Goodside gates, but probably not much farther than that before someone took notice of the Church girl traveling all by herself. Angel Cab traveled the same distance in just over three. I was halfway to Princeton before first light, and arrived on my sister’s doorstep in time for a breakfast prayer! The one-way fare cost all the money I had in the world, but that’s just one of many worries I’m choosing not to bother myself with right now.

I’ve taken missionary trips to other mallplexes with my prayerclique, but I’ve always had a chaperone and traveled on the Church bus. I suppose I could have asked Melody to MiBuy me a veil—it isn’t
quite
as important to try them on as I led her to believe—but I want to make the most of my time with her. I want to go out and see the world beyond Goodside. I want to reach as many people as possible. If I serve well, this could be a life-changing experience for both of us.

When Melody suggested we browse at Babiez R U, I got nervous. I knew it wasn’t a place of righteousness. Stores like this make a mockery out of Heaven’s greatest gifts and my housesisters testify all the time about how bad company ruins good habits, which is why I’m so lucky to have them in my life. But I have complete faith in my faith. There’s no reason to be afraid of anything I see here.

I pray that by joining Melody in this store, we will finally twinbond. It’s been a month since our miraculous reunion and she has yet to call me sister. In fact, she has yet to say much to me at all, unless I ask her directly. Melody has been open about herself but uncurious about me, answering ten times the number of questions that she has asked, a tally that stands at three: “What are you doing here?”; “Why didn’t you tell me you were coming?”; and “I don’t think you’ll need another veil while you’re here but if it’s that important to you then I guess we can go to the Mallplex, okay?”

Despite her reticence, just standing next to my sister is as exhilarating as cruising across the Benjamin Franklin Bridge, over the Delaware River, the cab taking me out of one state and into the next just as the sun crowned the horizon. . . .

That’s how I lost my best veil.

I longed to merge with this glorious landscape! I longed to unite with the majestic skyline! I longed to revel in His goodness at a hundred miles per hour. I lowered the window and stuck out my head, and shouted out.

Angel screamed, swerved, screeched the breaks, and screamed some more. We were blessed that there aren’t too many cars on the road at sunrise.

Once I was safe back inside the car, she prayed about my recklessness before saying she was surprised to see such behavior out of a Church girl like me.

“You don’t need to return to His kingdom
right now
, do you, love?”

She was right. I didn’t need to meet my Maker today. Especially after I’d gone through so much trouble to get here.

I’ll never forget the sight of my veil in the split seconds after it freed itself from my tangled hair, soaring, up, up, upward, closer to Heaven, a dazzling flash of white against the pink and blue sky.

The Proposition (The Plus One Chronicles) by Lyon, Jennifer
Mad Professor by Rudy Rucker
Six Steps to a Girl by Sophie McKenzie
Nearlyweds by Beth Kendrick
Death in a Summer Colony by Aaron Stander
It Takes a Witch: A Wishcraft Mystery by Heather Blake
An Inoffensive Rearmament by Frank Kowalski
Unchained (Men in Chains Book 3) by Caris Roane
Keeping Blossom by C. M. Steele
India Black by Carol K. Carr
Our partner