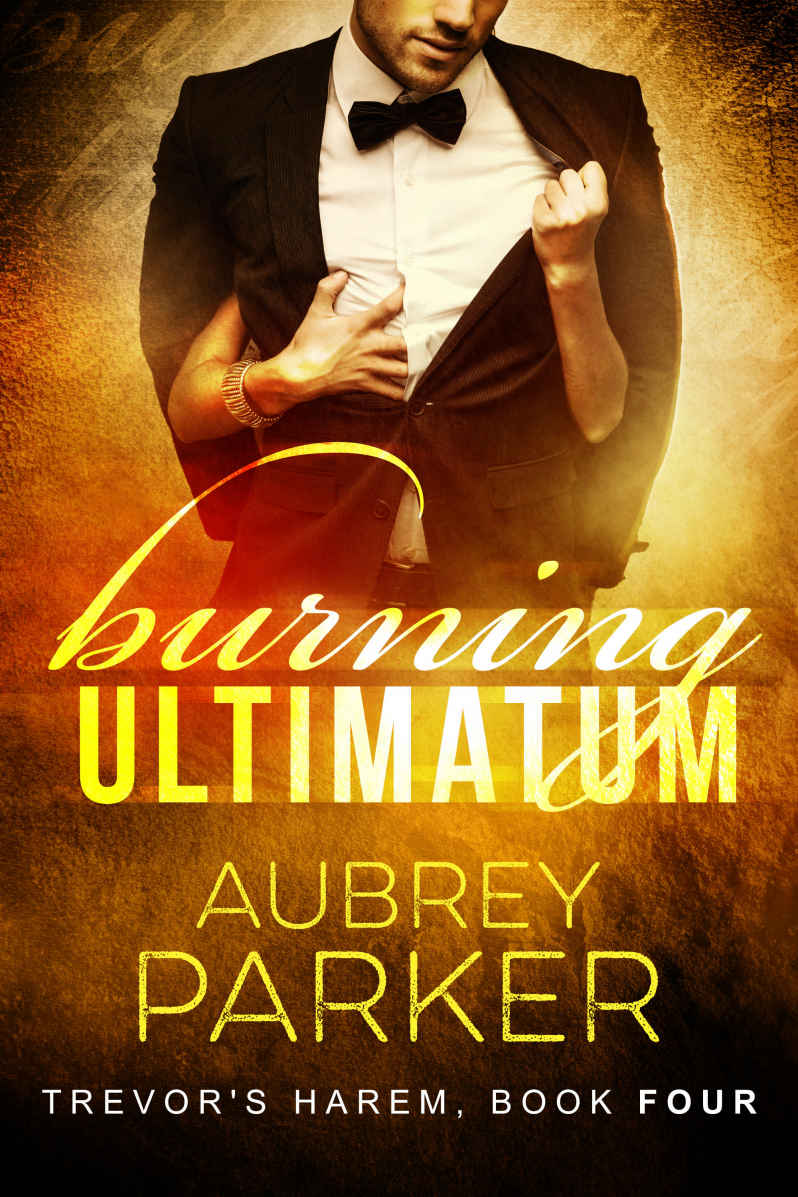 Chapter Thirty - Stuff You Should Know

T
HE
B
URNING
U
LTIMATUM

In the dream, I’m dressed in virginal white. A flowing nightdress churning around me in slow, undulating waves as a warm breeze caresses my skin like invisible hands. The thing must be far too large — there’s so much fabric. Sheer white material rolls in like fog on my right and left, pulling me into its storm.

The latest challenge looms ahead — the one from Caspian White. I should be afraid of this — of Caspian — but I’m not. Because I’m free. What’s coming, it seems, is what I’ve always wanted.

There are six men ahead in this dark room, all dressed in the best finery, with ornate black party masks ordained with feathers and silver sequins. Each man is illuminated from above by a tiny spot like in a museum display. I can’t see the walls. The men are unmoving. They all could be statues.

I slowly move forward. Past the first man, whose skin is dark, nearly a foot taller than me and twice as broad. Past another slighter man, around whose mask I can see the ghost of stubble. My gown is swirling like the ocean, but it’s as if none of them see me. As if they’ve been frozen for me to browse, like exhibits in a gallery.

As I move through the dim, I become aware of a large, round, polished wood table in the shadows. I near it and realize that it’s some sort of a centerpiece. I look back — the men have turned and are all now surrounding the table as I come up beside it.

One of the men breaks formation and removes his mask. It’s Caspian White. My heart quickens.

This is part of the test. I watch him a moment, but his expression’s unyielding.

I sit, let my legs swing, and wait.

“Lie back and open your legs.”

“Things have changed, Bridget. This is no longer a game. Now the stakes are real.”

It’s something I’ve already sensed. There are only three of us now: me, that bitch Kylie, and Jess. In the dream, I’m not sure how to feel about Jessica. She appears in the corner, peeking out from behind some unfathomable shadow. She’s wearing a garment like mine, but hers is red. She darts away when I see her. Then I’m looking at Caspian again. He’s not tapping his foot. A man like him doesn’t need to. His gaze is insistence enough.

My legs sigh open. It’s possible I’m excited, but mostly I feel terrified. The five other masked figures are now watching, turned toward me, stock still.

“You,” Caspian says, pointing at one of them. Then he turns his finger on me, at my open legs, my bare middle below the sheer gown. His meaning couldn’t be clearer.

The man approaches me. Grabs my ankles then closes my legs instead of parting them farther. He uses the leverage of my pressed-together legs to turn me over. My chest concusses the table, inviting a dull and horrible ache. I’m left bent over the thing, my feet on the floor, ass aimed at the man who’s come to claim me.

I feel him come very close, bending over me.

“I can get you out of this,” he says. And I realize it’s Daniel. His hand rests on the table, one cuff unbuttoned, slightly rolled up. I see the familiar tattoo. I recognize his scent. Seeing him here should evoke hatred after what he did. After the way he’s been screwing around with Jessica. The way he’s avoided me since Kat was removed from the house. But in this dark and frightening place, I only feel comfort when Daniel is near. At least he’s familiar — a reluctant but flawed protector.

He’s pressed up against me from waist to chest as he whispers in my ear, and it’s like I’m wearing armor. No one can touch me now. Except for him.

On cue, the other men all unzip, pull themselves out, and begin to stroke. I feel Daniel stiffen against my ass as well, but I know he’s still wearing pants. I can see his hands as he approaches me clothed.

But my hand creeps backward. Between my legs. There’s sudden electricity there. Wetness. My heart hammers blood through my ears, my head, my neck.

“Don’t say no when you don’t really mean it.”

I feel a twitch. Daniel’s cock responding to what I’ve said. His hand moves to the back of my leg then trails slowly upward, taking the gown with it. I feel myself bare. I feel his finger brush near me, not on me. The throb from my head and neck moves to my groin, feeling intense, unresolved pressure.

I think Daniel will hesitate, but he doesn’t. His hands move away from me then bustle at his waist. Fabric sighs as if opening. I hear a zipper then feel hot pressure against my pussy. I want to push back into him, make his cock slide inside me.

He’s paused, pressing my delicate folds, driving me crazy. He won’t push in. I
need
him inside me.

“You want me to do this.” It’s not a question, but a statement in masquerade.

I wish he’d stop splitting hairs. Everyone is watching us about to fuck as I’m bent over this table. Everyone is judging us, weighing my performance in this important competition. Daniel’s question is stupid and irrelevant. This
must
happen, whether I truly want him to fuck me or not. It’s not that I’m self-destructive. It’s not that I would decide that sex with someone who betrayed me is a reasonable idea. It’s not that I
consistently, reliably
make terrible decisions. It’s not that I’m opting to sate my short-term desires over what truly makes sense. It’s not like I have a history of giving in to temptation, knowing full well that I’ll regret it later.

The truth is that we
have
to do this. He
has
to put his cock inside me whether I hate him or not. He
has
to fuck me and make me come while the others are watching. It’s not that I want it. It’s that we have no other choice.

I tell him all of this. The dream changes my voice, makes it leave in a needful whisper.

“No.” Daniel’s voice quavers, as if he’s reluctant.

“Yes,”
I insist. “The game has changed.
You have to.”
Then, to make it clear that I’m being coerced here too (and am not, no matter what the little voice inside my head says, totally into this), I add,
“We
have to do this, to please them.”

But in the corner of my eye, as my face still presses against the table, I see Daniel shaking his head. “No, Bridget. We both know it’s a bad idea.” He backs off and away, removing the pressure of his cockhead from my pussy. Making me break inside. Something cries out, then I’m backing up, grabbing for his arms, pulling him forward. Only once his cock is against me again do I cease, then beg.

“You want me,” he repeats, his voice the same hesitant monotone from earlier.

“Because you want me.”

“Just do it, Daniel.” It’s getting hard to speak with my clit tingling as it is. “Do it because there’s no choice.”

But now I realize there
is
a choice. The other men are gone. So is Caspian. Now it’s only Daniel and me — we could stop at any time.

But with a heave I slam my ass backward, ramming his cock deep into me. Then we continue, my hips thrusting. I’m doing all the work, because we
have
to do this.

I don’t have to steer our session for long because once he’s inside me something loosens in Daniel’s composure. His careful control cracks, and he’s grabbing my hips, filling me with his hard shaft over and over, faster and faster. I see a sneer form on his face, out of the corner of my eye. I hear him grunt. He was an addict in Bridget recovery until thirty seconds ago, but I’ve just shoved him off the wagon.

He moves faster. And faster. Soon, he’s thrusting so hard that I’m sliding a bit on the table, my tits skating back and forth across the wood on a thin layer of sweat. With every rebound, a moan of pleasure escapes me.

Daniel bends over me. His hand grabs the back of my neck, his fingers rough.

“Have you ever heard the parable,” he says between heavy breaths, “of the frog and the scorpion?”

But I
so
don’t care. About lessons or instructions or psychology or anything else he’s blabbed about in the past. Right now I only care about pleasure. I’m ramming backward into him, meeting his thrusts, filling myself with his dick.

Daniel continues as he fucks me, reciting like a professor while his balls slap the backs of my thighs.

“It goes like this,” he grunts between breaths. “A scorpion asks a frog to give him a ride across a stream on his back. The frog says no because if he does it, the scorpion will sting him. But the scorpion says, ‘Don’t be ridiculous. If I sting you, we’ll both drown.’”

I’m trying to ignore Daniel’s words to focus on the pleasure. This is
my
dream,
my
shameful fantasy. And yet he won’t shut the hell up, and I can’t make him even as I try to lose myself in the sensations.

Daniel grabs my hair. Pulls my head off the table as he lowers his mouth to whisper harshly in my ear. The pain in my scalp actually intensifies the sensations between my legs, and I come again and again, the dream effortlessly rising above what’s biologically possible. I’m nothing but orgasms. Nothing but pleasure. I’m dripping down my legs. I grip his cock with my pussy as he slams roughly into me.

With my hair in his fist, Daniel keeps going. “As they’re both drowning, the frog says, ‘Why did you do that? Now you’re going to die, too!’”

His grip on my hair tightens. He pulls me up higher, arching my neck backward. It hurts, but I don’t care. I want more of this. More.
MORE.

“But do you know how the scorpion answers the frog?” He practically spits, anger infiltrating his voice. “Do you fucking
know what he says
, Bridget?” Daniel’s cock erupts, but he doesn’t slow, orgasm only increasing his fury. “The scorpion says, ‘Fuck you, frog! You knew what I was when I climbed onto your back, and
I can’t change my nature!’”