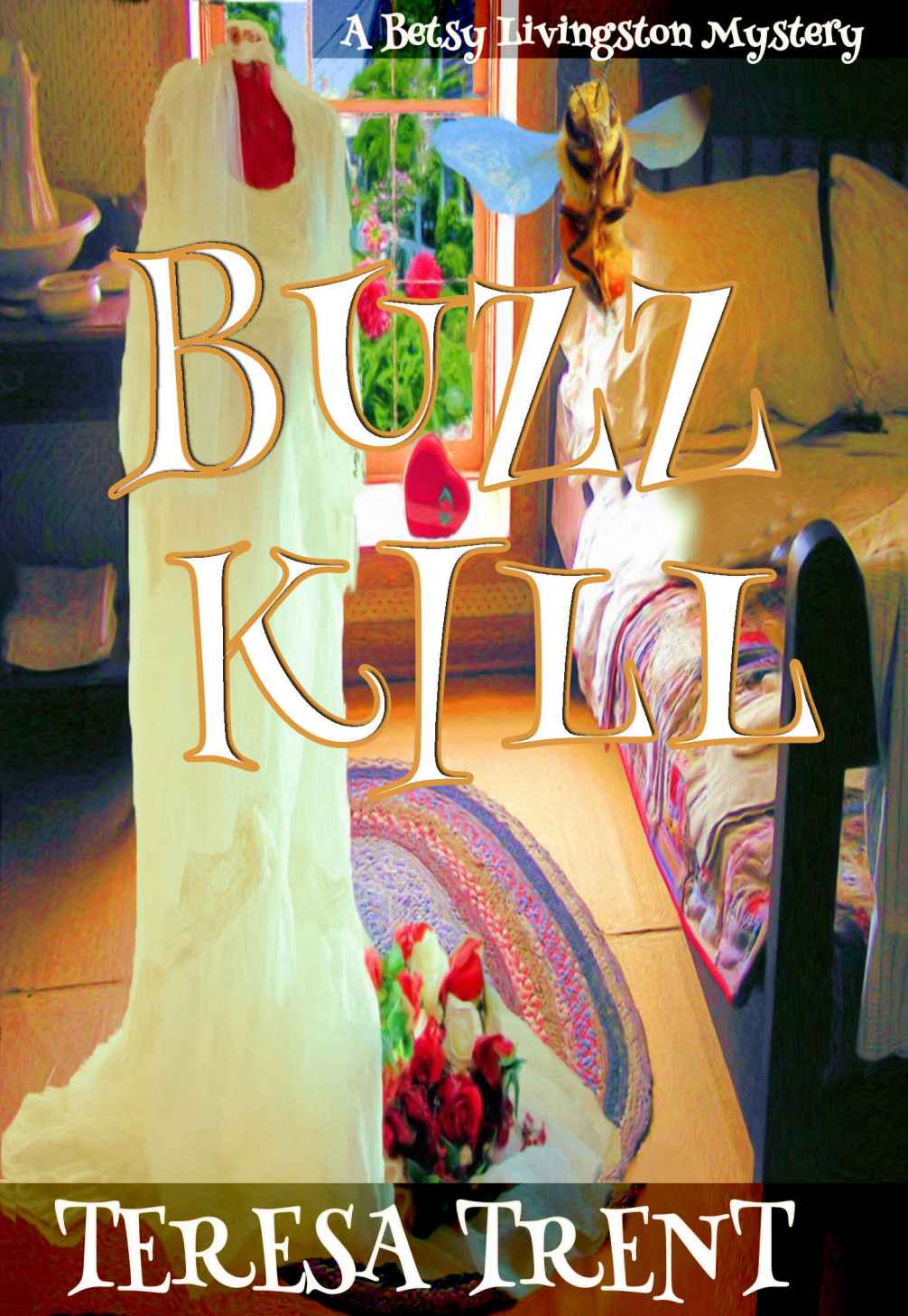 To
Steve, my very own sunny weather guy.

Thank
you for always helping me to believe in my dreams.

Other
books in The Pecan Bayou Series

Helpful
Hints From The Happy Hinter

A
bride at her second marriage does not wear a veil.  She wants to see what she
is getting.

The sun filtered
through the ancient Texas oak trees and glimmered on the waters of Pecan Bayou.
The birds, singing in their winter home, accompanied the stunning bride as she
floated down the aisle toward the man of her dreams. Leo looked up, his blue
eyes catching the vision of loveliness, and a gentle smile touched his lips.
Judd Kelsey held his daughter’s arm in a tight grip.

“This is it,
darlin’,” he whispered. “He’s a fine man, and I’m so happy for you. This is the
man you will live happily ever after with, right here in Pecan Bayou.”

The bride’s
heart sped up as she neared the front of the aisle. The outdoor setting was
beautifully decorated, each chair draped in white with springs of vibrant blue
flowers placed artfully about the seating area. Betsy felt the grip of her
father loosen as Judd stopped and kissed his daughter on the forehead.

“Go forth, my
blessed child,” he said. Betsy reached out to Leo’s extended hand.

“Mom!” My son
Zach was calling from his bedroom, rousing me out of my dream. “Mom, can I eat
breakfast now?” The drone of morning cartoons filled my ears.

I rubbed my
sleep-laden eyes. Could it be morning already? Butch, our Weimaraner, whined by
the bed. It felt like I had just surrendered to sleep fifteen minutes ago. Leo
and I had been up late on the phone the night before, sketching out the
beginning details of our upcoming wedding. The ceremony, we decided, would
reflect us, which means it would stay simple. Both Leo and I didn’t want
anything too showy, and I was hoping our wedding would be an extension of who
we were. I planned to have a ceremony at the Pecan Bayou Community Church
celebrating our union with friends and family.  We would wrap it up at around
three in the afternoon, and then Leo and I would be off on our honeymoon in Mt.
Washington, New Hampshire, the place where the major weather patterns of North
America intersect. Doesn’t sound all that romantic if you don’t take into
account the gorgeous bed-and-breakfasts we found online, but we would spend the
weekend in Pecan Bayou and fly out on Monday for a whole week of beautiful
snow. Being in Texas, we never get to experience the beauty of cold weather
like people in the northern states. Northerners might hate snow, but many
Texans see it as the stuff that decorates Christmas cards or the beautiful
lilting white showers than cascade around Bing Crosby in old movies. It’s fairy
dust to people who never get much of it.

The best part of
all of this would have to be the day we have chosen – Valentine’s Day. The most
romantic of all holidays falls on a Saturday this year, so now each year as we
celebrate our anniversary, we will be celebrating Valentine’s Day. It just
doesn’t get any better than that, I thought. I sighed as I caught myself
smiling.

After putting
Butch out in the back yard, I poured cereal into a bowl, and my cell phone rang
where I had left it on the charger. My Aunt Maggie’s picture showed up on the
screen.

“How’s the
little bride-to-be doing this morning?” she said brightly.

“Well, I had
something on my mind. I need to talk to you about the wedding.”

“Really?” I
poured the milk on my cereal. “You don’t think I’m making a mistake, do you?”

“Not at all,
baby girl,” my aunt assured me. “This time you’re marrying the right guy. Your
last husband, Barry, had been handsome, motivated and charming, but taking off
when you were seven months pregnant was not charming. I don’t see Leo ever
doing anything like that.”

“No,” said
Maggie. “You found the hottest commodity in Texas. A weatherman. You’re getting
him before hurricane season, to boot. I couldn’t ask for a better
nephew-in-law.”

She was right.
After Barry left me, I did what many single mothers do – I found a way to go on
with my life and raise my son alone. Zach had grown into the most wonderful
little boy, and from all of that I had learned to take a while and get to know
the person I would be committing the rest of my life to. Leo and I had been
dating for almost three years now, through good times and bad. When I first met
him, we were stopping our boys from killing each other at a Scout meeting. With
a start like that, I knew this guy was the one.

“Breakfast is
ready, Zach,” I announced down the hall as I replaced the milk in the
refrigerator. When Leo and Tyler moved in with us, would we all be able to fit
in my little house? We had just been so happy on our stolen weekends and
vacations together that where we lived seemed unimportant. As I pulled on my
house slippers, it was becoming more and more important. Would we live in Pecan
Bayou? Or would we have to go house hunting in Dallas?

“I know you’re
working on the wedding planning and all,” continued Aunt Maggie, “and I would
like to help in any way I can. You busy this morning?”

“I’m always
busy, but that never stopped you before,” I said.

“Okay then, I’ll
be over in a couple of hours.”

“Sounds good.” I
heard a beep in my ear. “I have a call coming in.” I switched callers.

“Good morning,”
I answered, thankful we weren’t on Skype.

“Just wanted to
see if you got any sleep after our marathon planning session.”

“A little.
Listen, there’s something we need to talk about that we didn’t get to last
night,” I said.

“What? Seems to
me we covered everything but the color of the bustiers the bridesmaids will be
wearing.”

He was full of
life this morning. Too bad I didn’t feel the same. I still needed about a liter
of coffee before I was ready for any type of humor.

“So what did we
forget?”

“We forgot about
after the wedding,” I said. “Where will we live?”

Leo had a
two-bedroom apartment in Dallas. When he had leased it, he was a bachelor.
After his sister died, he became an instant father to Tyler. His former home
gym became Tyler’s room, and the StairMaster became another piece of living
room furniture. It was funny how we had discussed the living arrangements so
randomly. This was a subject we needed to nail down before the wedding.

He paused,
amazed I couldn’t understand a word pretty common in Texas vernacular. “Dallas.
My job is here. You can write your columns from anywhere.”

I had grown up
in Pecan Bayou. Zach had grown up in Pecan Bayou. The thought of uprooting him
was scary. Aunt Maggie had always been like Zach’s grandmother, and my dad was
grandfather, extra dad and super police guy to Zach. Zach was ten, and the
thought of him entering his tweens in a large Dallas public school terrified
me.

“Did you think
we would settle in Pecan Bayou?”

“I’m sorry. I
just assumed we would all live in Dallas. I mean, Tyler’s school is here. My
job is here.”

“Zach’s school
is here, and family.”

There was a
pause on the other end. “Betsy, I had no idea you felt this way.” He sighed.
“Listen, I have to head out to work early today, and Tyler’s not even out of
bed yet. Can we talk about this tonight?”

“Okay.” With
that, the line clicked off.

“I love you too,
but you need to come and live here,” is what I really heard. Or had I been the
one saying that? What would this do to my dad? To Aunt Maggie? To my cousin
Danny? To Zach? To me? I plodded down the hall and stuck my head into Zach’s
room. He was crawling on the floor, looking under the bed.

“Zach? What are
you doing?”

“I’m looking for
the sock to match this one,” he said, holding up a wrinkled, day-old,
dirt-stained sock.

“Why would you
want to match a dirty sock?”

“Because I can’t
find any clean ones.”

“Hold on.” I
retrieved a basket of clean clothes that had yet to be folded. Sifting around
in the socks, I wondered if I would like living in Dallas. I had never really lived
in any town bigger than about 30,000 people. I would probably get lost just
trying to find the grocery store. Would there be a market for my column in a
Dallas paper? I doubted it. Pulling two clean matching socks out of the basket,
I headed to the kitchen to start the coffee. Zach gave me a look reflecting how
he can never find good help these days. Wonder what he would think of the
housekeeping staff in Dallas?

“Now Betsy, tell
me everything you’ve done so far. The wedding is just two months away,”  my
Aunt Maggie said as I sprinkled red sugar on the third batch of Christmas
cookies we had produced for Zach’s class party.

My bones ached,
and I could use a four-hour nap. Maybe it was all of the Christmas preparations
on top of the wedding, but I was already exhausted. Every girl imagines
marrying the man of her dreams in a posh ceremony, but what no one tells her is
that it’s an extravagant party she throws for herself.

“Okay, I have
flowers arranged with Mr. Stokes,” I said. “I already have our deposit in with
him.”

“That old
geezer? I’m surprised he didn’t ask for unmarked bills,” she scoffed.

“Hey, he grows
some of the prettiest flowers around, and I really want things that are native
to Pecan Bayou.”

“I’m surprised
he would have anything in February,” she replied.

“Well, okay,
they’re greenhouse flowers, but they will still be native to Texas,” I
admitted. “Then, I have an idea for a bakery to bake the cake.”

I jumped,
remembering something.

“Oh shoot! I
have a dress fitting this afternoon. I was supposed to meet Elena. I totally
forgot.”

“Don’t you have
some sort of helpful hints talk today?” Maggie said.

I put my hand to
my head, getting flour on my nose. “Yes. Darn. I completely forgot. The last
time I talked to this group about making homemade calamine lotion, they made
two hundred jars of the stuff and were planning on selling it at their
Christmas bazaar. They put little flower stickers on all of them and tied red
and green ribbons around the lids. It was really very lovely. Today I’m talking
about mixing up an shampoo using tea tree oil.”

“I’ll have to
call Lavonne and see if I can reschedule the dress fitting.”

“Why don’t you
try to do it tomorrow?”

“Can’t do that,
I have to visit Mr. Stokes to pay him. He wants cash up front in order to
reserve his flowers two months from now.”